The hotel, being a cheapie, didn’t offer breakfast, so we sprung out around 7:30 looking for food… and discovered that almost nowhere in Bath is open before 8am, at least not on a Saturday.

Eventually (eg at 8am, or just before) we found a great cafe near Bath Abbey just opening up, which made a delicious cooked breakfast.

We made a note to come back here the next day. (Spoiler alert: this plan totally failed, as they are closed on Sundays.)

I find this slightly amazing for a tourist town. Someone with the nous and energy to open up early every day and serve good quality food could clean up… though perhaps every hotel other than ours serves breakfast?

Then out to explore the riverside walk. I’d taken a quick look the evening before, and this time we followed it further, snapping photos along the way. It was quieter than the streets, quite tranquil, but no less scenic. (Mind you, at one spot we did notice a number of shopping trolleys deep in the water below.) 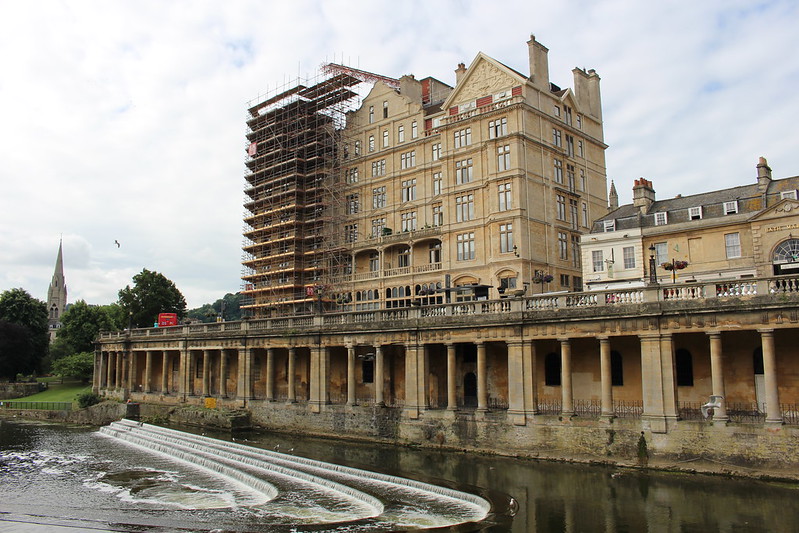 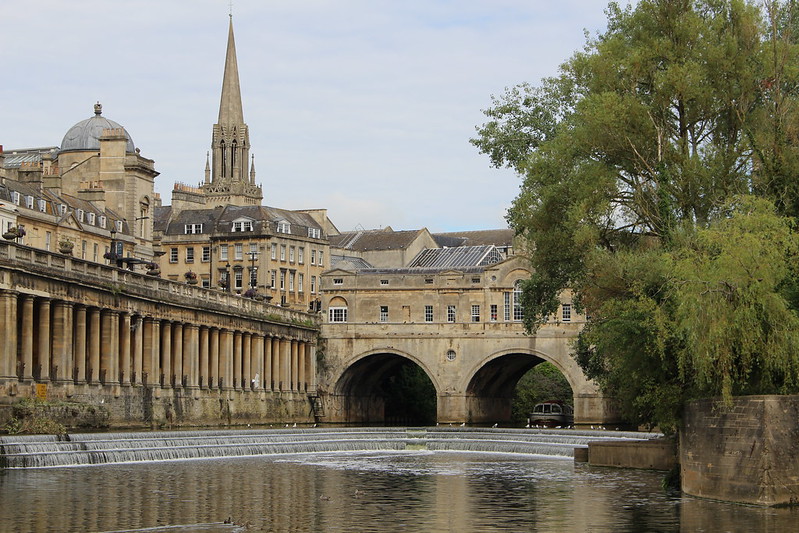 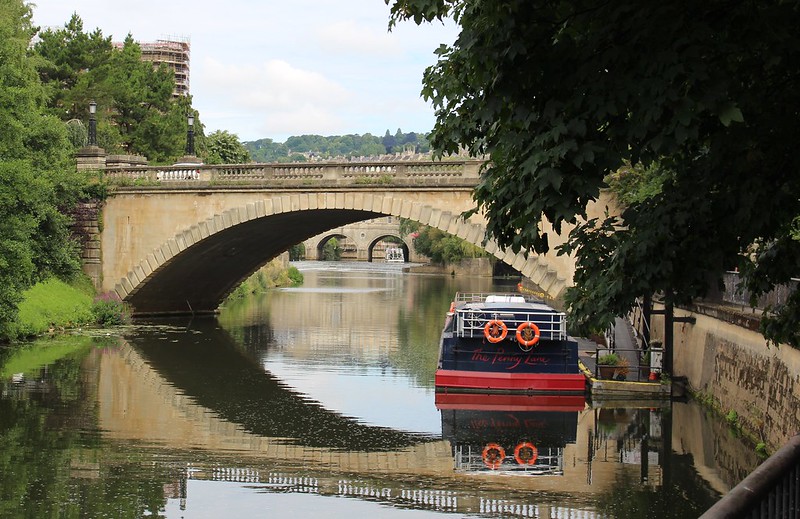 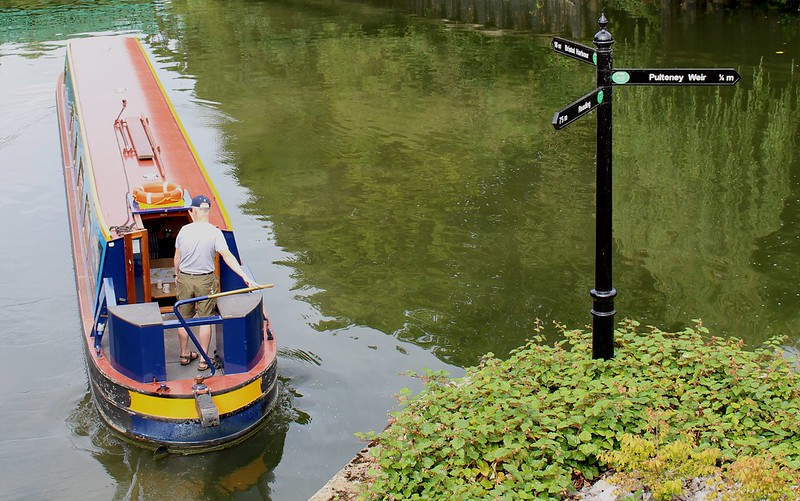 A mile or so up, we found a lock, and a narrowboat was on its way through, so we (and others) stopped to watch the watery action.

There are still vast numbers of canals around Britain, now made largely redundant for shipping by railways and roads. Our accommodation in Cardiff was right next to former industrial canals, and this one in Bath connected into the River Avon.

While travelling the countryside by train, along the waterways we’d seen numerous canal narrowboats. They can be rented out as a floating caravan, which would be a pretty relaxing (if perhaps cramped) way to get around. Slow too, but that would be part of the appeal.

We followed the river back to the railway station, noting the turrets on the local version of skyrail. 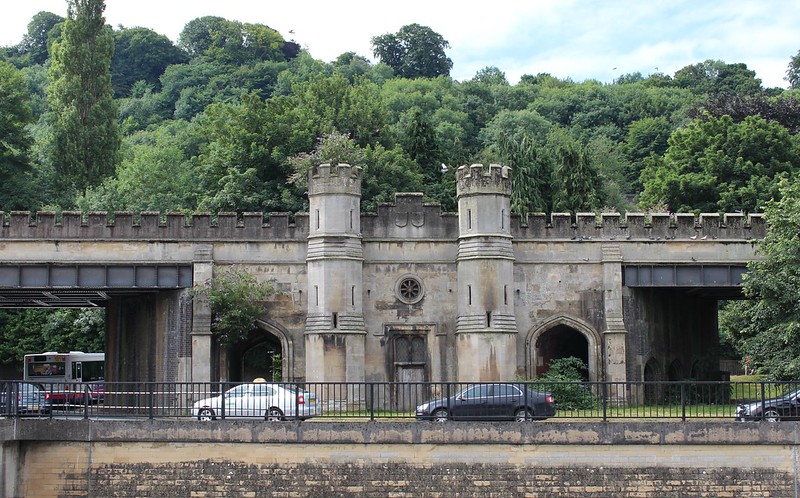 Next to the railway station, the main shopping centre was less busy (and less picturesque) than the more touristy parts of town around the Abbey.

They seem to have found creative ways to use the old telephone boxes, which presumably don’t get a lot of use as telephones anymore. 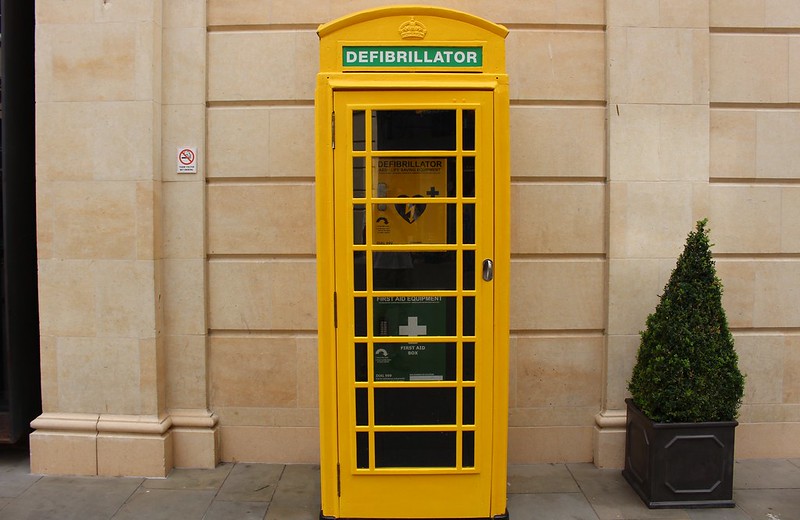 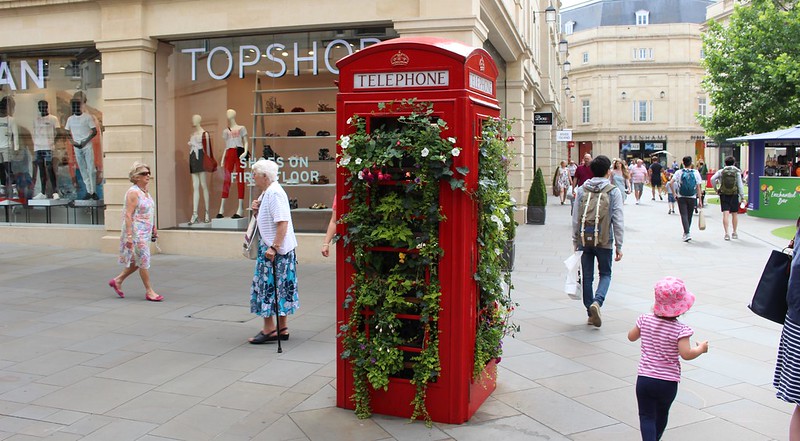 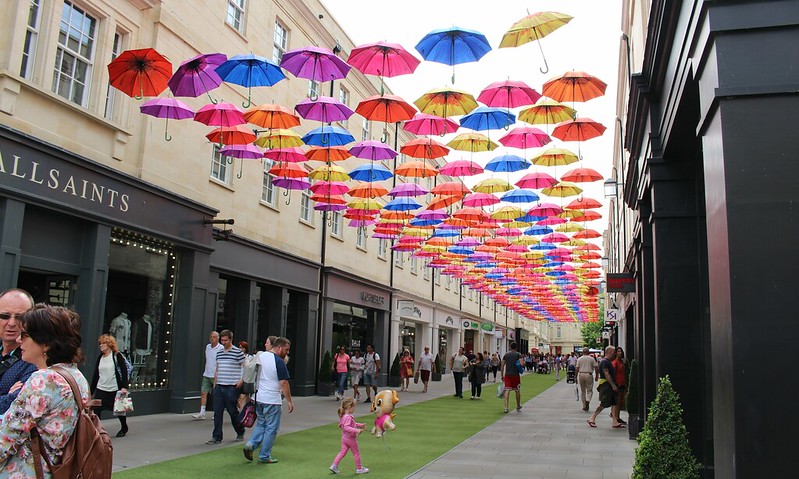 M decided she’d like to go and look in the Jane Austen museum. Without wanting to make any comments based on gender stereotypes, the rest of us decided this wasn’t our cup of Regency era tea, and we kept exploring.

In fact I had a goal: I needed to find a camera SD card, as mine had filled up, partly because I’d left the camera set to RAW (which I don’t normally use while sightseeing).

One of the things I remember from my youth, reading computer magazines from afar, sometimes you’d see ads for shops you’d never encountered personally. Watford Electronics was one, very prominent in BBC Micro circles. Another you’d hear about was Maplin Electronics, and unlike Australian electronics chains such as Dick Smith and Tandy, Maplin is still around, and we found one of their branches in Bath and had a browse. I couldn’t help noticing they don’t seem to have descended to selling kettles and toasters.

Mind you, the prices didn’t seem too good at Maplin, so I ended up buying an SD card across the street at a stationer’s shop. 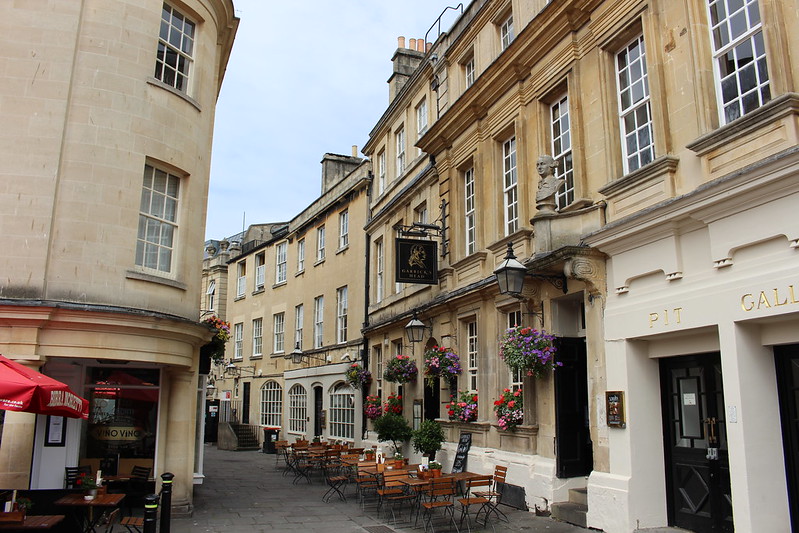 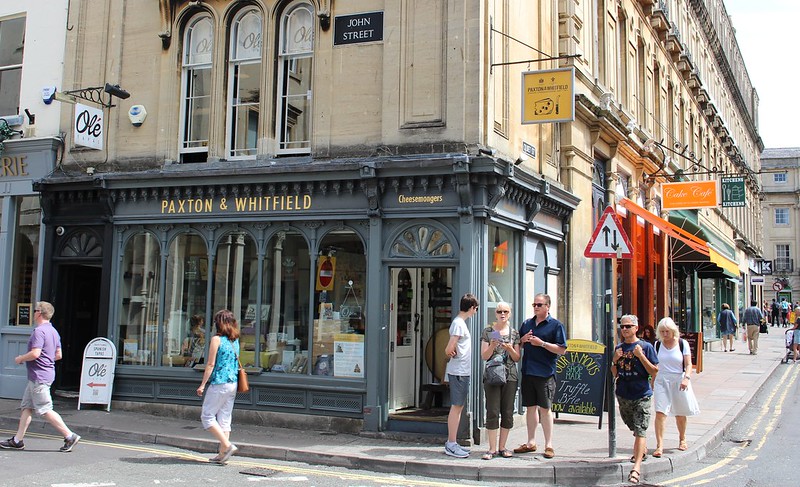 Time for some lunch. Later on in the trip we’d be heading to Cornwall. As a taster, lunch was at the Cornish Pasty Company, a chain of fastish food restaurants selling… you guessed it… pasties. With mushy peas.

Now, what to do for the afternoon?

Plan A: I’d been trying to get organised to meet up with my dad’s cousin, who lives not too far away from Bath, near Salisbury. After some missed messages, we finally reached each other on on the phone. Alas, she and her husband were busy that day, but we had a good chat and promised to catch up next time I was in the UK, or more likely, when they were in Australia.

Plan B: There are bus tours from Bath to Stonehenge, about an hour away. We worked out that tickets are sold from the tourist information office, and went to find out if any were spots available for the day. Nope, sold out.

Plan C: How about we hop on a train to Salisbury (roughly an hour), and check out the town and the cathedral there, which has the tallest church spire in the UK, and also the oldest clock in the world, as well as having a copy of the Magna Carta.

So we walked back to the station, bought tickets and hopped on a train. 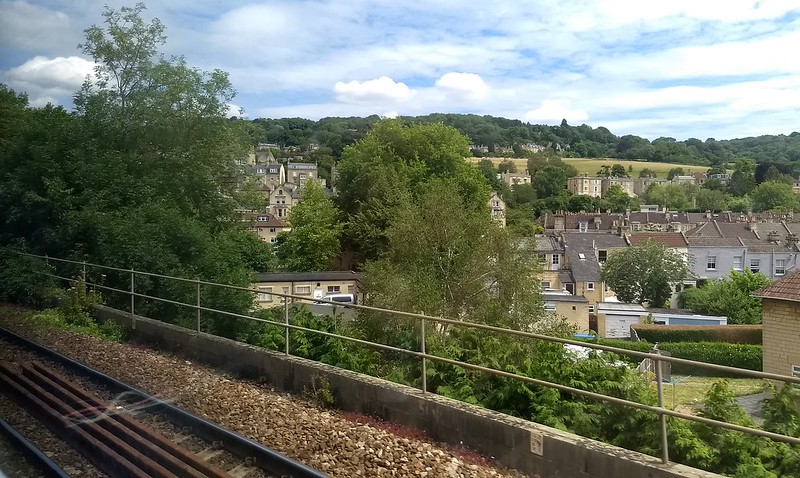 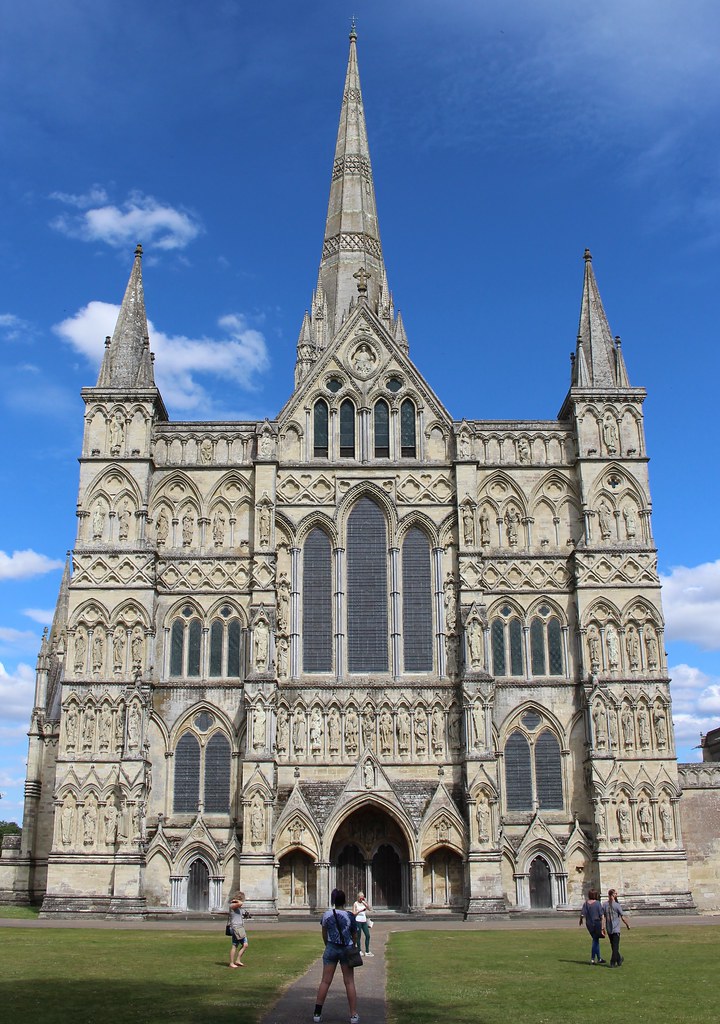 It’s a pleasant walk from Salisbury station to the cathedral, but by the time we got there, we’d just missed out on the last tower tour of the day. Damn.

Instead we looked around the cathedral, and the Magna Carta.

I’d seen a Magna Carta a long time ago, at Brisbane World Expo in 1988. I remember long queues… not so this time – no queue at all when we looked. Apparently this is the best of the four surviving original 1215 copies left. 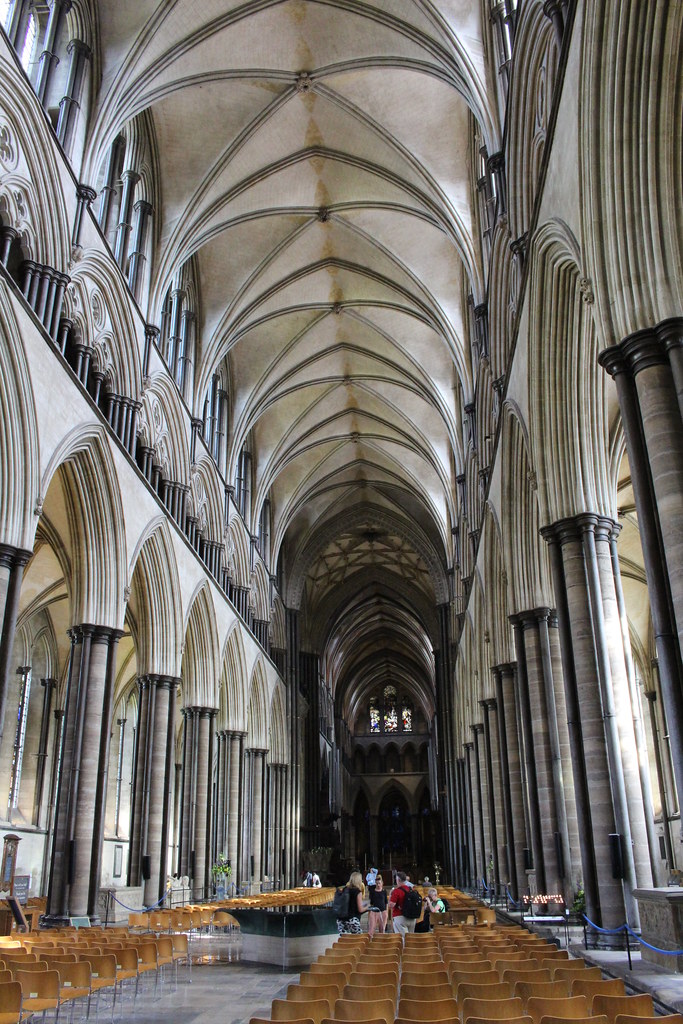 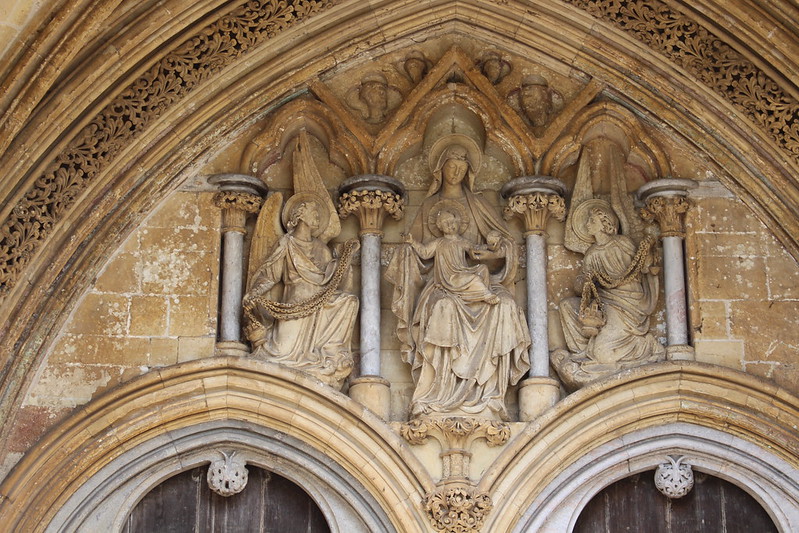 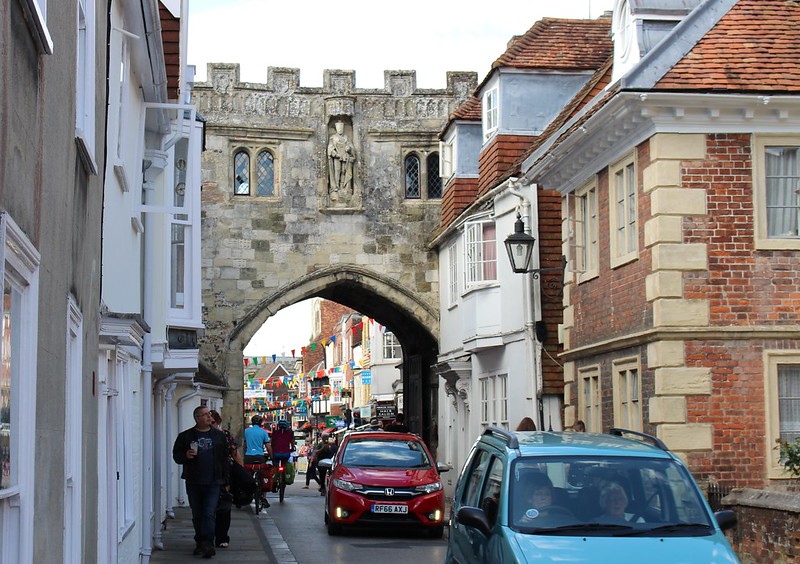 A drink and a snack in the cafe, then we strolled around the town a bit more, and headed back to station.

A little while to wait for the train. Perhaps we should have stopped for a drink in the Railway Tavern next door? 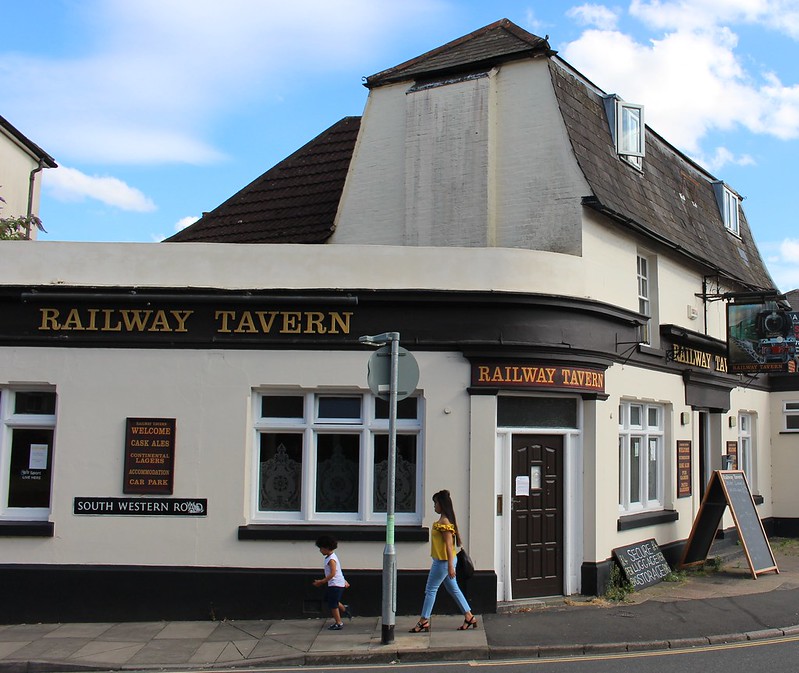 The platform seemed quite crowded, and the hourly train was late. It became apparent that the service before it had been cancelled, and when it finally arrived, it was packed. (The signs indicated another later train had been cancelled too. Great Western Railway was not having a good day.)

Notably on some of the stations we passed, the Passenger Information Displays (or whatever they call them in the UK) included text to say the train was “Service reported full and standing”, to warn passengers ahead of the crowding. Good to know. 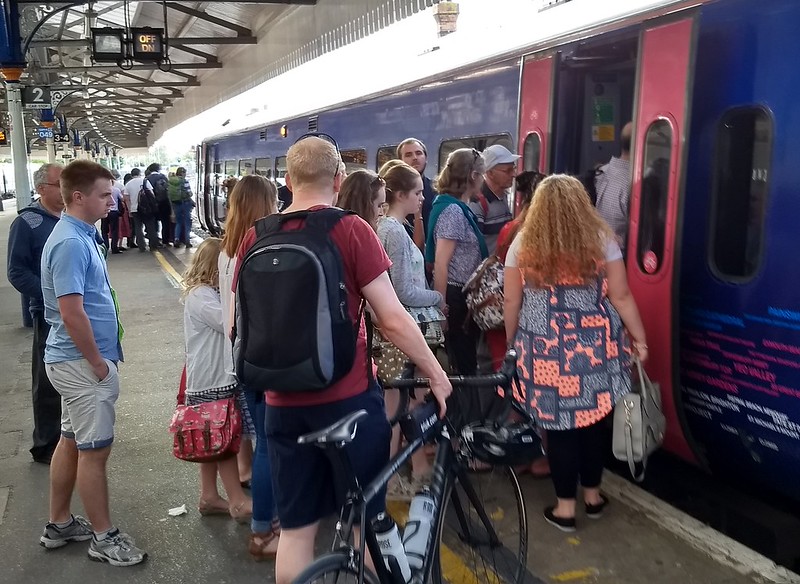 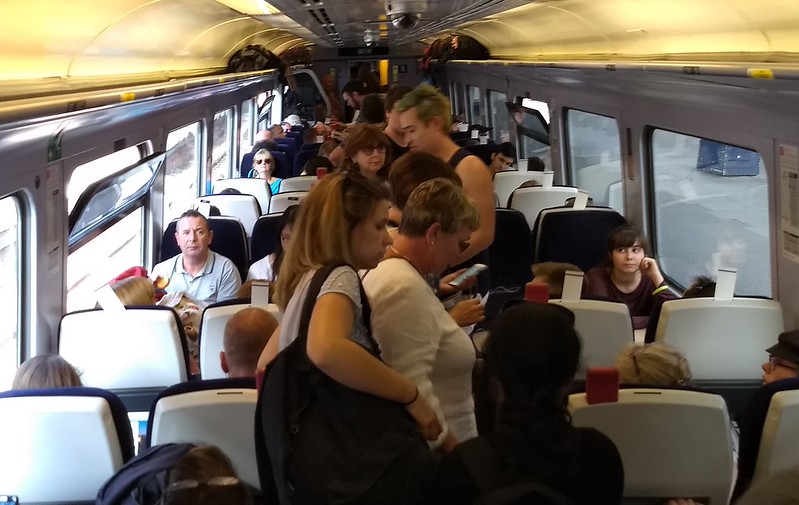 The crowd were grumbling but resigned to their sardine-like fate.

A father and son quietly sat in their seats with their gunzel t-shirts, no doubt acutely embarrassed on behalf of their preferred transport mode. 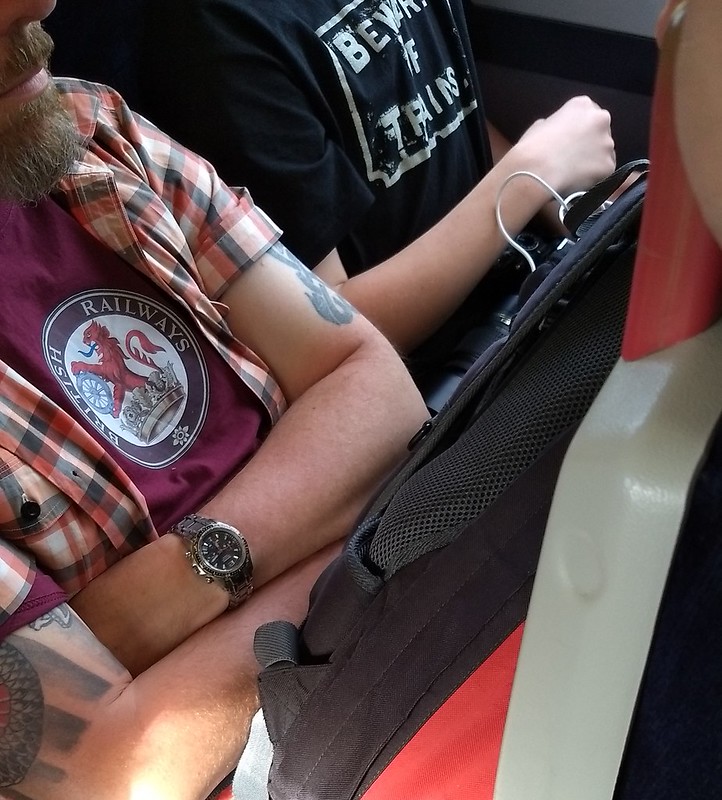 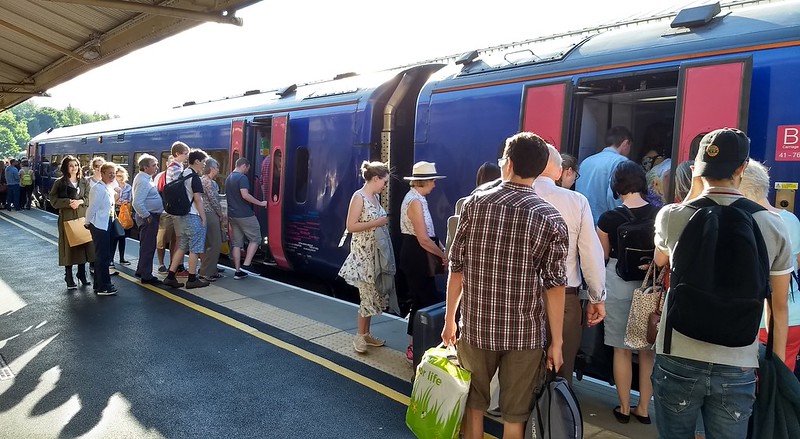 We got back to Bath before too long. It could have been worse – signage indicated some trains were being bustituted that weekend. 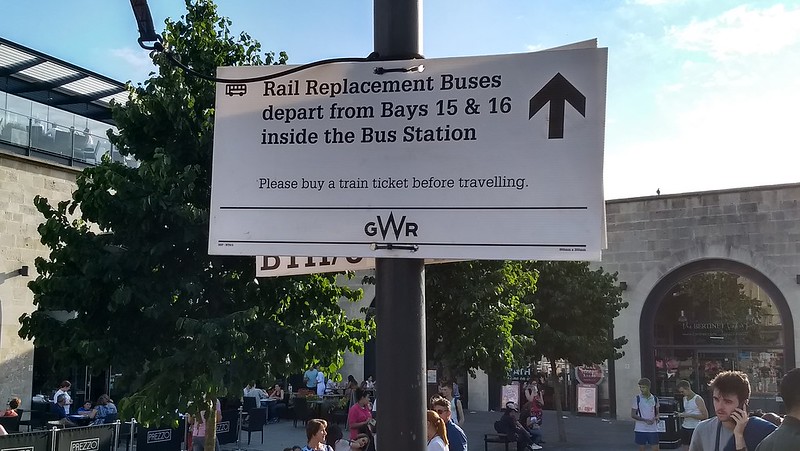 I ducked into a department store to buy a hat. When packing I’d brought one too many jackets, and had left my sun hat behind. And it had been sunny every day since we’d arrived, and I was getting concerned about sunburn.

Next we headed for the Roman Baths. I was hoping the crowds would have died down, and this proved to be the case. It’s also a bit cheaper after 5:30pm, no doubt to encourage people to visit outside peak times.

We followed the audio tour, which as a bonus includes interjections from Bill Bryson, for a slightly less serious and straight description of some of the features.

They’ve really done a good job at presenting the history of the place, and the context of Roman Britain. 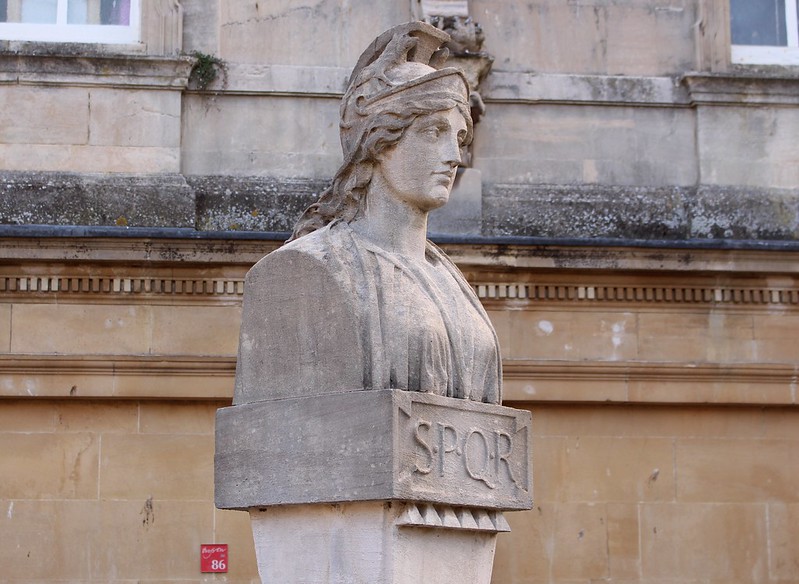 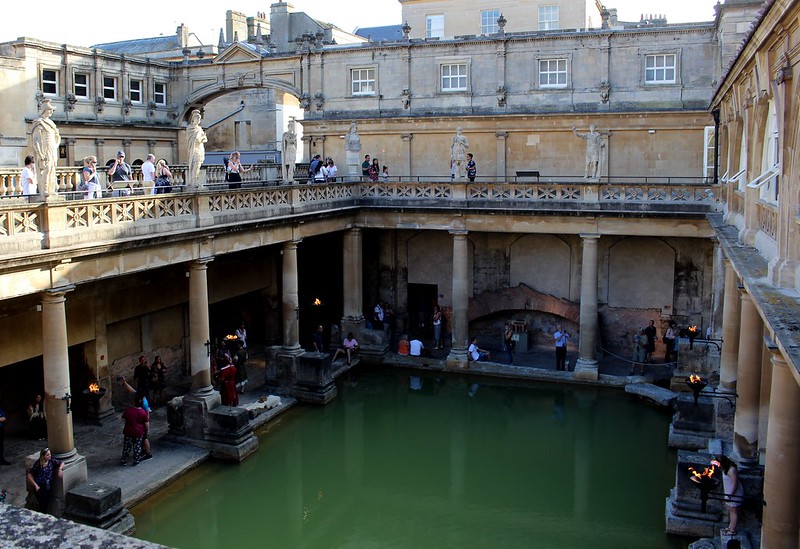 That said, you wouldn’t want to be dipping your hand in the water, let alone bathing in it.

Then we searched for a pub for dinner which we found in a place where the music a bit too loud (oh well, it was Saturday night), but food was delicious.

I tried unsuccessfully to order a Lemon, Lime And Bitters. The lady behind the bar couldn’t figure this out. “Lemon, Lime and Beers?” Apparently this is not known in Britain.

No matter. After dinner we headed back to the hotel – the next day we’d be on the move again.

2 replies on “Canals and cathedrals”

Fascinating. The train from Bath to Salisbury goes past the village of one branch of my ancestors, who quarried a lot of that stone.

And, this retrospective posting idea really doesn’t work from a reader point of view.

Try this link to read the posts in chronological order.

(Where it says at the bottom “Older posts”, it really means “Next page”, eg newer posts)