It turns out some are floating the idea of the Swanston/Flinders Street intersection being converted to a pedestrian scramble crossing (aka a Barnes Dance/Barnes Walk).

THE CBD’s busiest intersection, at Flinders and Swanston streets, could get a pedestrian-friendly makeover under changes forced by the Metro Rail tunnel project.

Lord Mayor Robert Doyle has revealed one option Melbourne city council is considering is the introduction of a traffic light sequence in which pedestrians can cross the whole of the intersection from different directions.

The only scramble crossing at present in the CBD is at Elizabeth/Flinders Street. It works well when cars stay out of it during the pedestrian phase.

What is a Pedestrian Scramble/Barnes Dance? This is. Not suited to everywhere, but can work well.🚶🚦 pic.twitter.com/LmANc6msNs

Bourke/Spencer is probably the top candidate elsewhere in the CBD. Swanston/Latrobe could also work well.

As for Swanston/Flinders, potentially it could work, though the best locations for them are where there are lots of pedestrians in all directions.

There might be other, easier alternatives, but whether a scramble crossing works or not probably depends on the design of the traffic light cycles. If they minimise green time for cars, and maximise it for pedestrians, as well as having more spots in the cycle to let trams through, then it’s got potential to improve things. 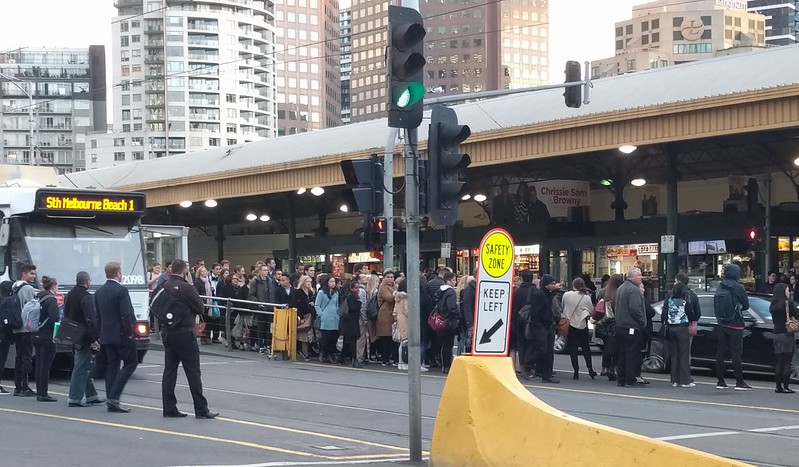 Indeed, issues around the Federation Square tram stop are a reminder of the importance (alluded to in the Herald Sun article) that we need to think big picture.

What are the effects the metro tunnel will have on pedestrian movements? (It’s likely to provide underground walkways from the current station to the new one.) What about trams along Flinders Street, set to increase with some Elizabeth Street trams running to East Melbourne? And could/should there be a move to reduce or even eliminate private vehicles from Princes Bridge and this section of Flinders Street?

There are safety benefits to scramble crossings — accidents from turning cars reduce, though this is less important at this particular location where there are virtually no turning movements at the same time as walk signals.

And I do think there’s another important benefit to scramble crossings: on a psychological level, they improve the walking environment. Giving the entire space to pedestrians, even if only once each traffic light cycle, sends the message that (here at least) pedestrians are not, and should not be marginalised.

14 replies on “Should Swanston/Flinders be a scramble crossing?”

There were a few in Auckland that seemed to work very well. I’d certainly support the implementation of them here.

I am far from an expert on this matter (or any other issues you’ve raised on this blog TBH), but I am speaking as a frequent user of these crossings as a pedestrian, tram user AND a car driver.

I would also hate to have that crossing at the Flinders Street tram stop moved towards the intersection. It’ll make that morning mad dash towards the trams a bit longer. I find the other crossing at the other end of the tram stop somewhat less safe and more prone to pedestrian congestion. I am however looking forward to the underground City Square to Flinders Street underground subway when the Metro Tunnel is ready. It’s a long wait but I imagine it’ll be a bit like Singapore MRT’s shopping centre subways.

What I would suggest is for them to try it on the Bourke Street – Swanston Street intersection first as a trial.

The question is: which Hoddle Grid crossings should *not* be a Barnes Dance crossing?

There are very few that don’t need much greater pedestrian amenity and which don’t have people on foot vastly outnumbering people in cars at all hours of the day.

Swanston should be closed to non-essential motor-vehicle traffic, and the corner of Flinders Station extended and one of the right-turn lanes from St Kilda road removed.

I actually don’t think all crossings should be a pedestrian scramble.

Where most of the foot and motorised traffic is north-south and then east-west, then to introduce a scramble into the cycle just slows everything down.

For the same reason, I wouldn’t do this at Bourke/Swanston. It would just mean more waiting for trams.

This is also why I’d be a teensy bit cautious about Flinders/Swanston. You’d need to identify the distinct phases required for car/tram/bike traffic, and then see how an exclusive pedestrian phase would fit into that.

Daniel, we clearly need a hierarchy of use.

We currently have one, and it’s an unthought default that has been retained. It goes cars/trams/cyclists, pedestrians. This heirarchy also assumes that all wheeled traffic has the same needs and priorities, and generally puts straight-ahead traffic (ie, trams, cars going forwards) on the same cycle as turning traffic.

We need to consider the city as a place that facilitates the free movement of people between places, and this means that in most places across the city pedestrians should have priority, except on major tram routes (including Swanston).

The city also desperately needs more cycle routes to allow cyclists to enter and leave the city safely and reduce the emphasis on this intersection. This is a major dereliction on the part of VicRoads and the City of Melbourne.

Actually the VicRoads network operating plans have a sort of hierarchy of use for every road in the CBD. Everywhere but King and Spencer Streets have PT and pedestrians as the highest priority.

AFAIK the goal is to get rid of all but essential traffic in the city, especially on Flinders St, Spencer St and King St which still carry a lot of through traffic today. With Metro Tunnel works over the next few years, I’m led to believe that improvements to tram and pedestrian flow on Flinders Street is a key priority.

The jury is out on the benefits of ped. countdown timers (at least in aust.) but I’d be surprised if we didn’t also run a pilot at this intersection esp. under the guise of scramble/MM construction.

“Actually the VicRoads network operating plans have a sort of hierarchy of use for every road in the CBD. Everywhere but King and Spencer Streets have PT and pedestrians as the highest priority.”

That’s false. They might claim that, but the facts state otherwise.

As measured by the space allocated, private motor vehicles are given absolute priority across the inner city, with exceptions for Swanston, Bourke, and… I’m not sure if there are any others worth talking about. About 70% of the space is allocated to motor vehicles, despite the fact that any any point in the day the large majority of people using our streets are pedestrians or tram users.

Speaking of countdown timers, I especially like that countdown used for trams at the Flinders Street Station tram stop. It’s designed for tram drivers but it helps passengers too too see if it’s worth running after a tram.

One of the biggest advantages of scramble crossings for pedestrians is the ability to cross diagonally across an intersection – so getting from Point A to Point B diagonally opposed across the intersection in one pedestrian crossing phase rather than two.

I’m not taking about current allocated space, I’m saying that there is in fact a plan for every road in the CBD. It’s an aspirational plan for what SHOULD happen.
That’s why I wrote about upcoming metro tunnel works – every time changes are made to roads in the city, PT and pedestrians must be considered as the highest priority. It’s incremental progress, but that’s why we have plans.

So yes, more road space on LaTrobe street for example is currently allocated to cars than any other mode. BUT that does not mean that planners and engineers want it to stay that way. It’s obviously inefficient in its current state, and so as changes are made to the network over time, more efficient transport modes will receive higher priority.

In the current climate I wonder if terrorism will be reason to not allow one?

“So yes, more road space on LaTrobe street for example is currently allocated to cars than any other mode. BUT that does not mean that planners and engineers want it to stay that way. It’s obviously inefficient in its current state, and so as changes are made to the network over time, more efficient transport modes will receive higher priority.”

Over the next 20 years? Because there’s very little in construction right now. Even the vaunted upgrade of a small section of Elizabeth St (less than 10% of its’ length) will still dedicate most of the space to vehicles and include a car and truck lane.

Perhaps you are aware of other projects yet to be announced, but as a member of the public I can only assume that the City and VicRoads will continue at their current lethargic pace.