Another in my series of ten year old photos: March 2007.

Smartbus advertising at Caulfield station. It was nice to see them promoting the frequent service, but there was only one problem: it wasn’t true. The Smartbus serving Caulfield (route 900) has never been better than every 15 minutes in peak. (And really, the frequency/radio thing is a bit lame.) 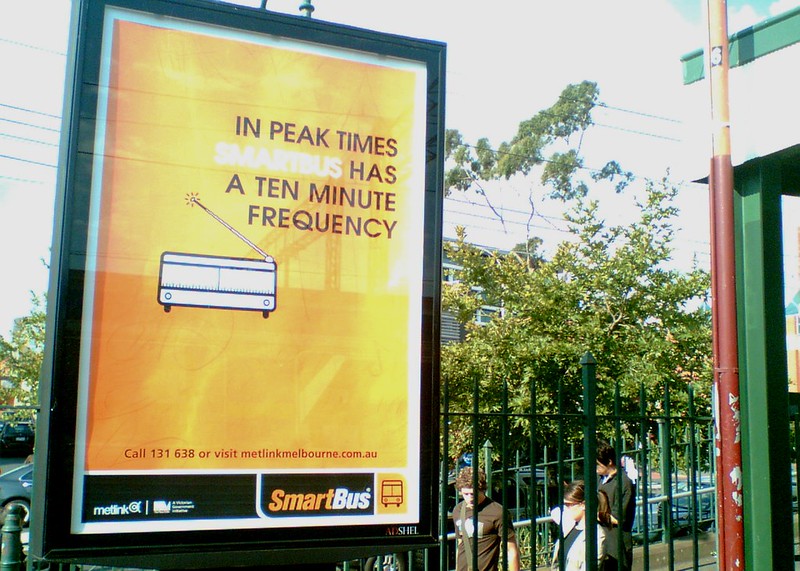 The Town Hall tram stop in Collins Street. Yes, even back then, the entrance ramp was a bottleneck at busy times. Note the canvas roller for the destination displays – these days they’re all LEDs. 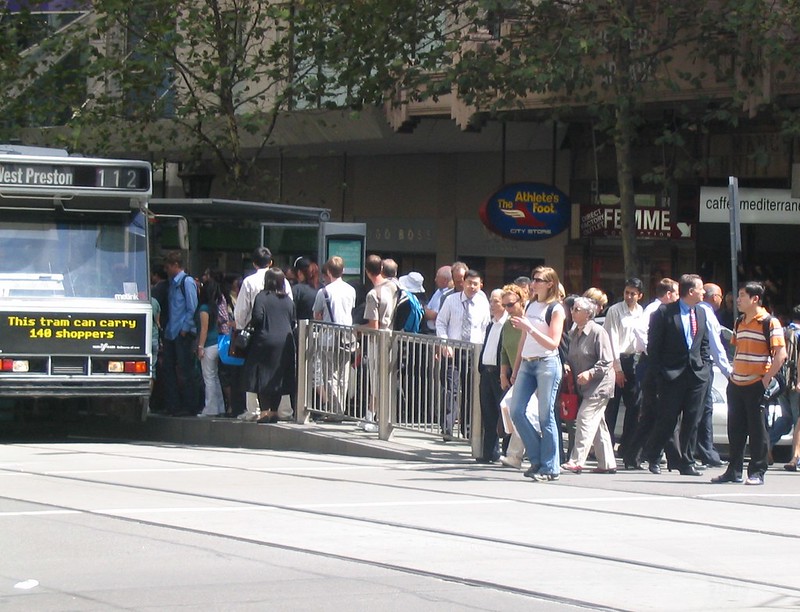 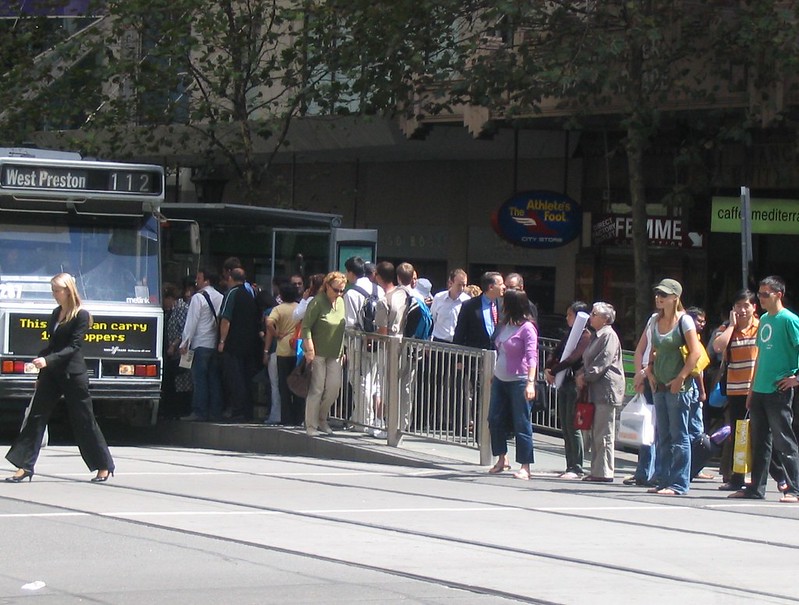 Train bingo at Richmond – tracks to/from platforms 2, 3, 4 and 5 have trains. Back then, Richmond’s platforms and ramps were largely uncovered. More shelter was added in 2015. 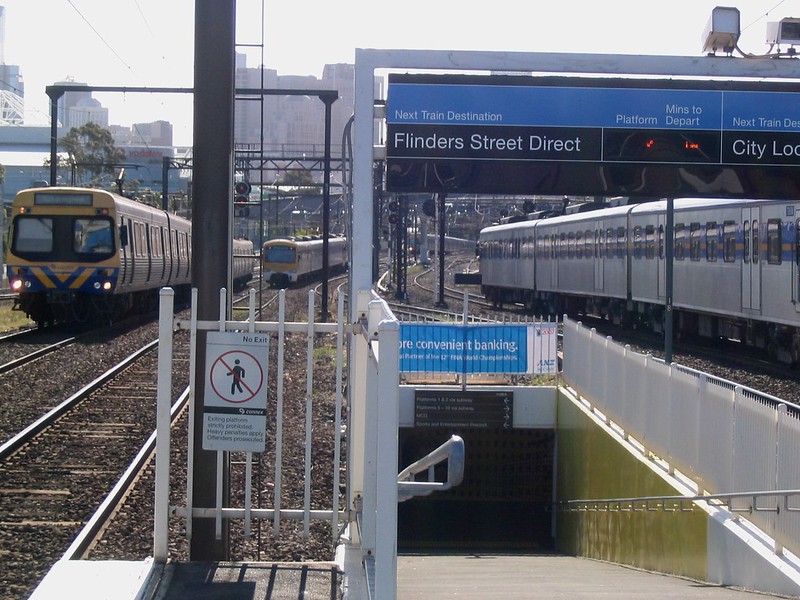 Delays on platform 5 at Flinders Street. As I recall, it was a stinking hot day. 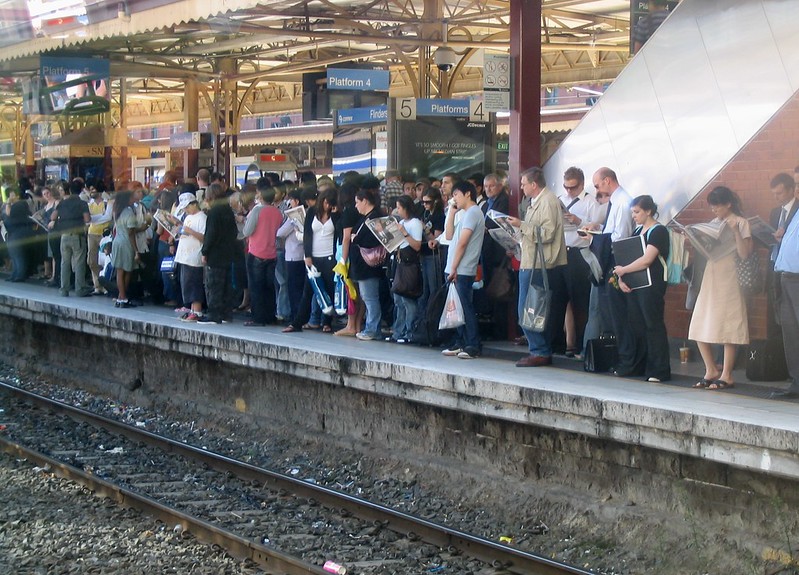 Glenhuntly station, then my local for some days of the week. A Comeng train crosses while a Z3-class tram waits. Despite the current level crossing removal program, this hasn’t changed – trams still wait while trains crawl across. 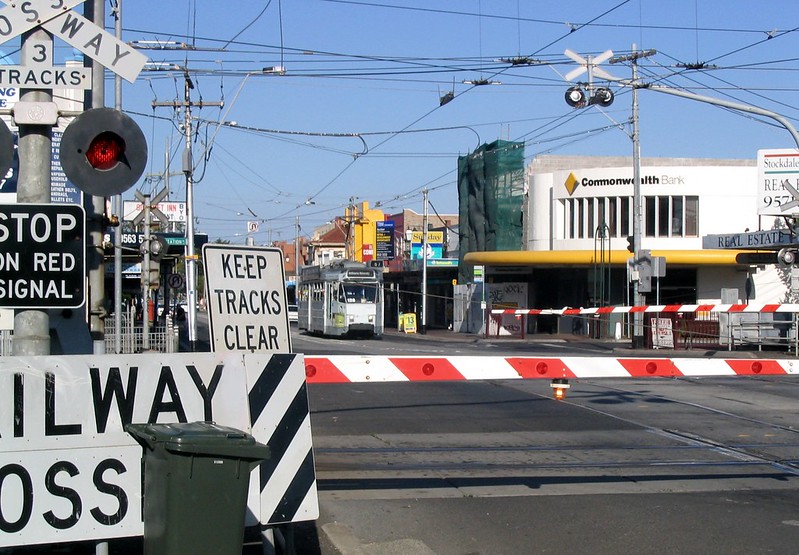 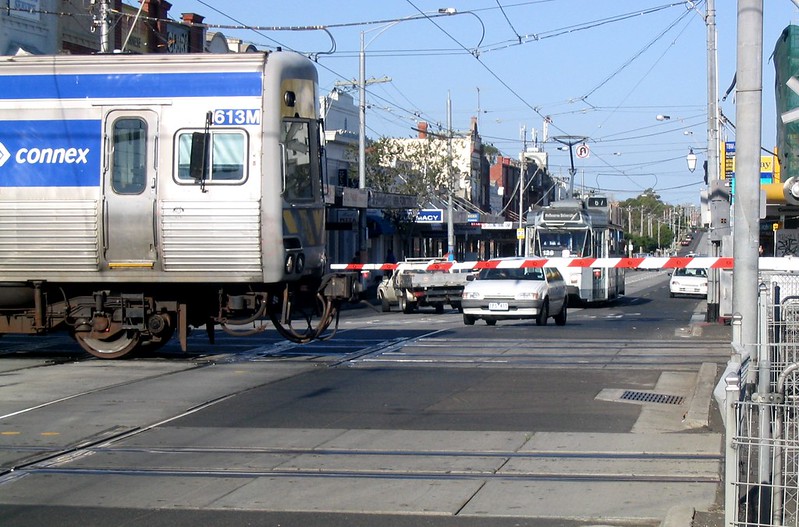 Also Glenhuntly; a Comeng train on platform 2, while a Siemens train arrives on platform 1. The earlier Siemens liveries were pretty ugly, but the Connex version was quite pleasing to the eye, I thought. 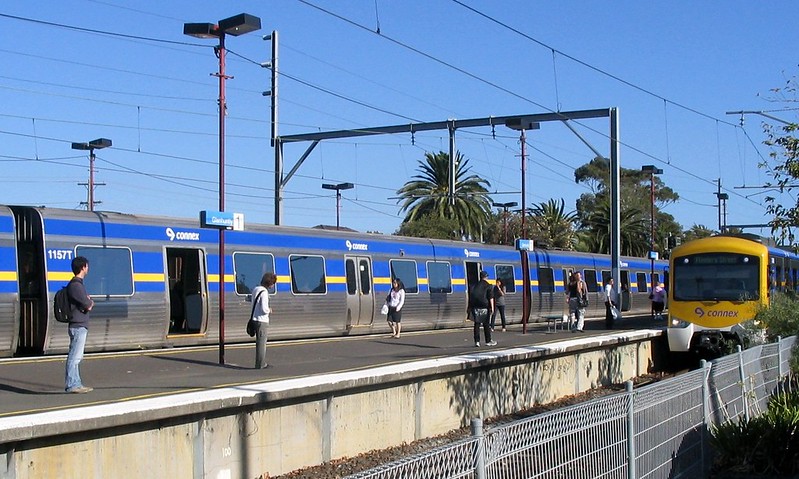 The Railway Museum at Williamstown, from a visit that month. Who is, or was Bill Bragg? Presumably not related to Billy Bragg the singer. I don’t know – searching Google didn’t find any answers. Anybody know? 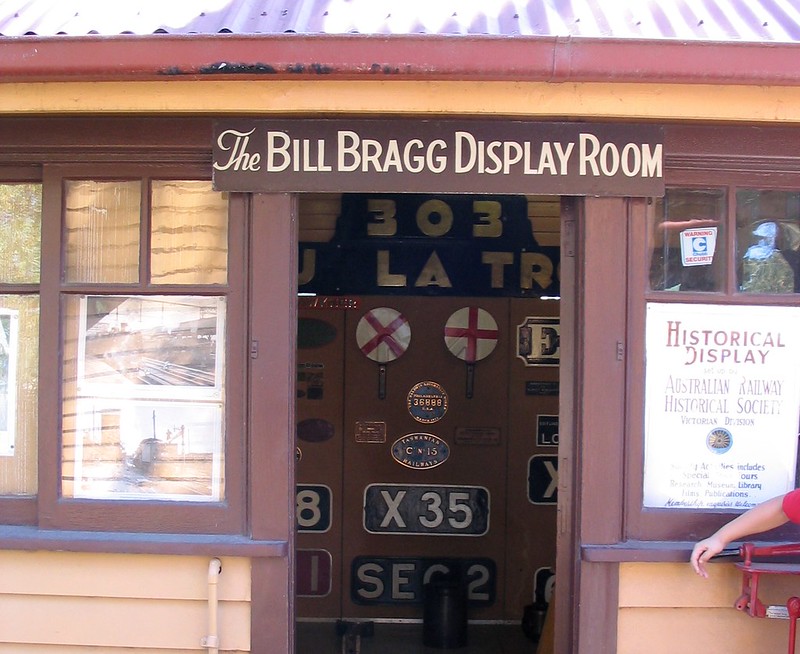 Also at the Railway Museum. I’ve been visiting since I was a kid. In many ways it hasn’t changed much. 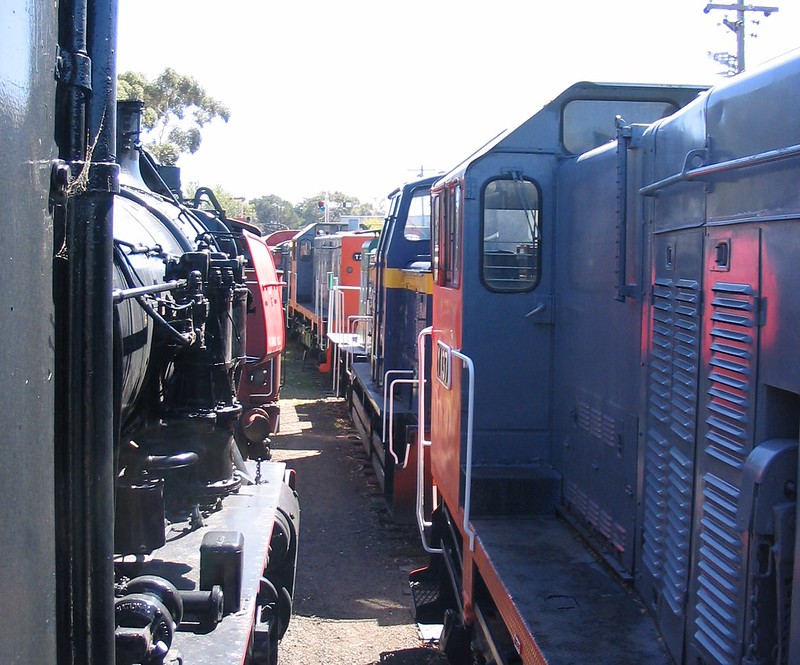 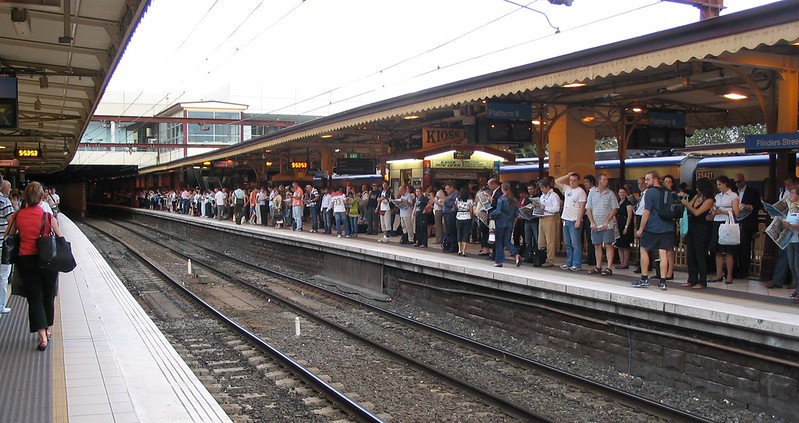 In 2008 I used this photo to compare to an old one from the same angle, and The Age subsequently reprinted them.

Another angle at Flinders Street, on the same day, in the mirror. 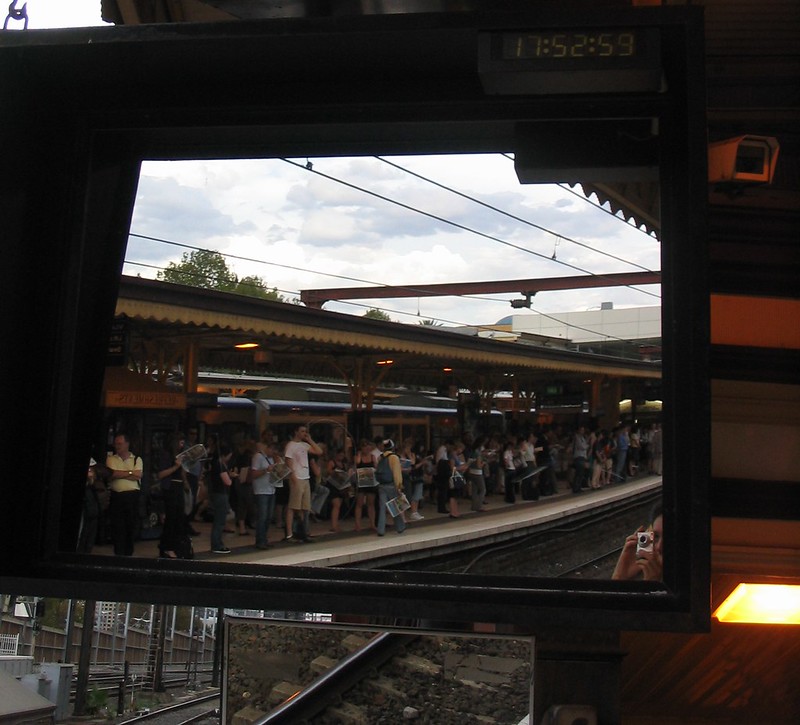 Back at Glenhuntly, what a surprise, someone is queuing where they shouldn’t. 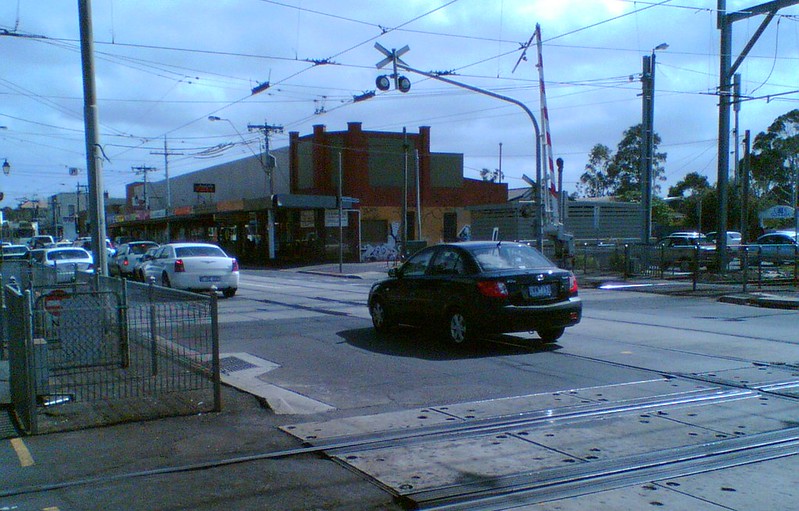 Something you never see anymore: the marker for a wheelchair to board a 3-car train. 3-car trains were the bane of evening and weekend travellers, resulting in horrible crowding at times. Nowadays they’re almost all 6-cars all the time. 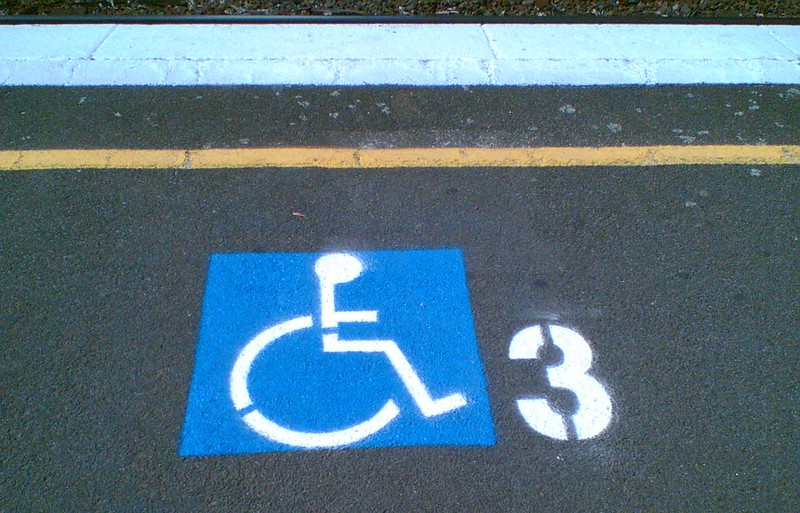 Interesting photo of the people waiting on the platform. Mobile phones were already a thing but not a fully-functional internet device. People were more focused on the newspapers they probably got given on the street.

And the one-carriage trains at night, where only the front carriage was lit and available for passengers. Not sure when that disappeared.

The extra roofing at Richmond has certainly helped, as did the extra destination indicator screens installed a little earlier (although they did not install any minutes to all destinations screens at the city end of platforms 7&8, which is very annoying for people arriving from the Burnley Group and wanting to change to the Caulfield group or Sandringham line).

The angle of the photo and the appearance lengthening effect of the new shelters makes it look a bit like the ramps were shorter back then. Also a minor correction, the ramps at the Swan St end have always been fully enclosed.

There was a Bill Bragg who played both cricket and footy at Port Melbourne in the 1950’s.