Night Network has been running as a trial since the start of 2016, and solved some key problems:

Night Network kind of solved these issues, and with 35,000 extra trips every weekend, is getting people on board. But it isn’t perfect, and the cost has been huge, at around $80 million per year.

The PTUA put out this material highlighting some problems and things that could be done to improve it:

This got some coverage in the Herald Sun: Trains lying idle during Melbourne’s 24-hour public transport scheme (Pay wall)

The study into the timetables came about when it was pointed out to me that on some lines, the trains spend a lot of time sitting at the terminus. I wanted to find out how long.

The Working Timetable, if you can get hold of it (it’s not currently online), shows which service the train goes to after reaching the end of the line.

This made it fairly easy — except that the Belgrave and Lilydale lines do a complicated dance, with trains running from the city alternately to each, with shuttles filling in the gaps. It results in uneven frequencies (non-clockface times) in the evenings and on the Night Services. It could be fixed by running one of the branches from Ringwood as a shuttle, as happens on the Cranbourne, Alamein and Williamstown lines. 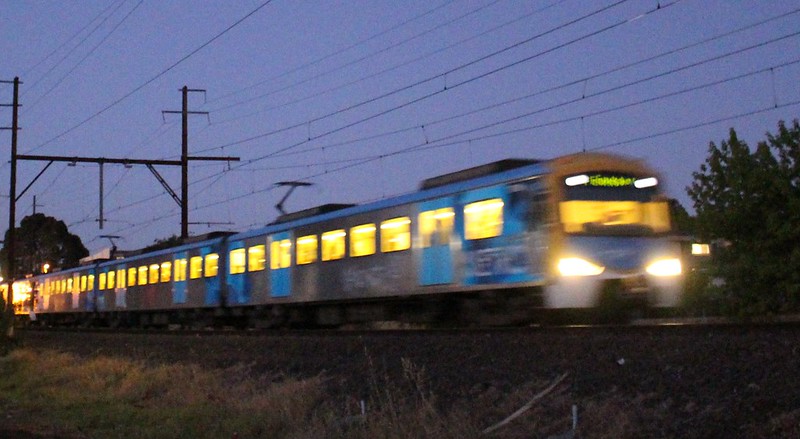 Anyway, the results showed that yes, on some lines the trains spend an enormous amount of time sitting idle. Perhaps inevitable for the shuttles, but Sandringham trains spend as much time stopped as they do running; some Belgrave trains wait for an amazing 62 minutes before heading off again, and you’ll find trains sitting waiting at Craigieburn, Upfield and Hurstbridge for more than 40 minutes each hour.

A big part of the problem is that the policy during the trial is for hourly trains. The idle time is far higher during hourly operation than before midnight with half-hourly services.

Perhaps secondary is that the timetable may have been written in a hurry to get it implemented by the start of 2016.

The Night Bus services still have the problem of a route structure that is completely different from day time — unlike the trains and trams (the half-dozen routes that run all night) which provide 24-hour service on weekends, which is much easier to understand.

So as the PTUA material indicates, it makes a lot of sense to refine the whole Night Network when the trial ends in mid-2017, to make it more efficient and economically sustainable, make it more useful for passengers, and make it permanent:

The aim should be a Night Network which provides:

…
The PTUA is also calling for rail bus services to run along train routes on weekday mornings, meaning 24/7 service along Melbourne’s rail corridors, a service that has run in Sydney since the 1980s.

11 replies on “Night Network: opportunities to make it better”

I used Night Network once, but because my journey required a connection with little control over my departure time – meaning 2 long waits – I found that it would have been quicker to walk. *Literally* quicker in the correct sense of the word. So I haven’t used it since.
Doubling frequencies could make it useful.

Run select services to/from Flinders St. on each of the four groups. To minimise the risk of disruption spreading I’d choose:

Run shuttles on all other lines. Using the lines listed above, passengers only have to change a maximum of one time if they’re returning home from the city.

This should allow 30 minute frequencies on all lines without much additional resources, if any.

The timetable must be easy to remember (human memory is fallible enough, let alone in the middle of the night). If I’m out in the city and think I might be leave between 2-5am, I should be able to look up the timetable beforehand and know that my train leaves at, say, 26 and 56 minutes past the hour, every hour. Keep it consistent for the whole night, and make Saturday and Sunday morning’s timetables identical.

Daniel, can you outline typical through-routing during Night Network operations?

With the City Loop not operating, it should be straightforward to link east and west lines for the most efficient results. Without checking, one example might be to keep South Morang and Hurstbridge operating from Platform 1 at Flinders Street; then Lilydale & Glen Waverley through-route with Craigieburn and Upfield using platforms 2 and 4 (3 holding a spare train), Pakenham and Frankston operating from 6/7 through-routed with Sunbury and Werribee from 8/9, with Sandringham and Williamstown operating through 10 and 13, and Alamein, Belgrave and Cranbourne as shuttles.

Other lines are run independently.

Despite these, the Craigieburn and Belgrave lines still have long layover times at the outer termini, though Lilydale and Sunbury aren’t too bad.

I say, alternating the Ringwood pair as currently should stay as it is. Perhaps you could run them more frequently. A half hourly combined frequency should be great.

Something similar for the Dandenong pair should work well too.

Perhaps you could provide a combined 15 minute service between Camberwell and the city, by operating Alamein lines through to the city.

You can improve connectability, by having a train arrive at Flinders Street, say, hourly within five minutes of each other, wait 10 minutes and all leave.

I like the idea of having all of the orbital smartBus routes operating at least hourly on these nights too.

What are the night network frequencies right now?

I was going to use the night network to get home from a friend’s place in the outer east on Saturday night (well 3am Sunday) but the 50 minute wait for my connecting train in the city put me off. Ended up spending $40 on an Uber into North Melbourne to make the earlier train because the last thing I wanted at that hour was a long wait in the city.

There’s no need to run every single line all night. Even in peak hour there’s not much patronage at Hurstbridge, why waste a train set and driver to run empty trains there at 3am? Lines like Williamstown would be better off replaced with a bus which could take people closer to home.

I made a theoretical timetable just then based on the Sandringham/Craigieburn examples of long layovers. At the moment they’re using 4x train sets to run an hourly service on those lines, so what if you through routed the two during the early hours and removed the service beyond Broadmeadows? You could run a 30 minute service with only 1 more train eg the runs for one set could be

When the Loop isn’t in operation I don’t see why you’d want to keep the five Groups separate, unless it’s a paperwork-related departmental responsibility split.

@L2, cutting back from termini changes the understandability of the network, so that’s probably less ideal than a simpler through-routing approach. Could be done if necessary, but there are other options which need to be explored first.

Separation of groups is likely to become more important in coming years. From 2018ish the Cranbourne/Pakenham line will be running slightly longer trains, for example, preventing that part of the fleet serving other lines. And already you’d need to avoid X’Traps or Siemens if you wanted to through-route some lines.

But it should be possible to do it. Almost anything would be better than the current arrangement.

Thought about the train differences, but the night network uses hardly any vehicles so you could run the whole lot with Comengs.

Results of a base-30 Night Network timetable. Assumptions: No City Loop, express through Southern Cross, no Loop services, minimise conflicts, stopping all stations except as marked. Connecting services to shuttles provide 2min interchange each way. Numbers in brackets are train sets required.

B: Upfield to Lilydale (8) & Craigieburn to Glen Waverley (7); Camberwell-Alamein (2) & Ringwood-Belgrave (3) shuttles. Flinders Street 1 & 2; Southern Cross via through tracks 10A and 8A. 10min for westbound Upfield at Flinders Street; only exception to the 6min dwell due to single track Gowrie-Upfield.

No significant conflicts; all have +/-2min breathing space, 6min catchup at Flinders Street and significant time turnaround time at termini; average across the schedule is 34.3min net dwell per return trip, including the 12 spent at Flinders Street. If Shuttles are 3-car sets, then total fleet requirement is 50.5 6-car set equivalents, so about a quarter of the fleet. How does that compare to current night network schedules?

Appendix: time could be saved on some runs, like the Sandringham-Williamstown route, but I wanted to give 15min services over shared track instead of two 30min cycles closely spaced. So the sections with better-than-2tph effective service to and from Flinders Street as far as Newport, Clifton Hill, Burnley (excluding East Richmond) and Caulfield. North Melbourne to Richmond gets 8tph and South Yarra 4tph due to parallel running, instead of 10tph and 6tph respectively, to provide 4tph to Caulfield and Newport.