I’m working on some more substantive posts, but meanwhile, here we go again: a random claim that the trains used to be faster than today.

“In 1955 it took under one hour to travel by train to Spencer St station (Southern Cross). In 2017 it takes 70 minutes. Hmmm. Something is wrong with this picture.” – Glenn, reader comment in The Geelong Advertiser

Yes indeed something is wrong with this picture: it’s not true.

Let’s take off the rose-coloured glasses.

Once again via Mark Bau’s excellent timetable web site, the 1954 timetable shows the fastest train to Geelong was 55 minutes, nonstop, at the not-very-convenient time (at least by today’s standards) of 8:25am (outbound).

The more useful (for Geelong to Melbourne commuters) outbound train at 5:10pm (the “Geelong Flyer”) took 57 minutes — also the time of the fastest inbound train. The 6:10pm outbound train took 60 minutes. These were all nonstop.

Trains that stopped along the way, therefore were useful to more people using intermediate stations (remembering that Werribee was part of the country service back then), took around 77 to 100 minutes — the slowest being the 7:05am Melbourne to Geelong, stopping along the way at North Melbourne, Footscray, Newport, Laverton, Aircraft, Werribee, Little River, Lara, Corio, North Shore and North Geelong.

The fastest train I can see in the 2017 timetable takes 55 minutes (5:33pm outbound from Melbourne), the exact same time as the fastest train in 1954. This not only takes a longer route via Regional Rail Link (about 81 Km vs 72.5 Km via Werribee), but it also makes three stops along the way: Footscray, Sunshine and North Geelong.

The fastest inbound trains are 59 minutes, for instance the 7:23 from Geelong, stopping at North Geelong, North Shore, Corio, Lara and Footscray.

Most other trains take 62 to 65 minutes, and have more stops. The slowest I can see is 68 minutes; the weekend lunchtime and evening trains from Warrnambool, for instance the 1:49pm from Geelong, stopping at North Geelong, Lara, Wyndham Vale, Tarneit and Footscray — a diesel loco-hauled train, which has slower acceleration than the newer V/Locity sets commonly used on the shorter-distance services to Geelong. 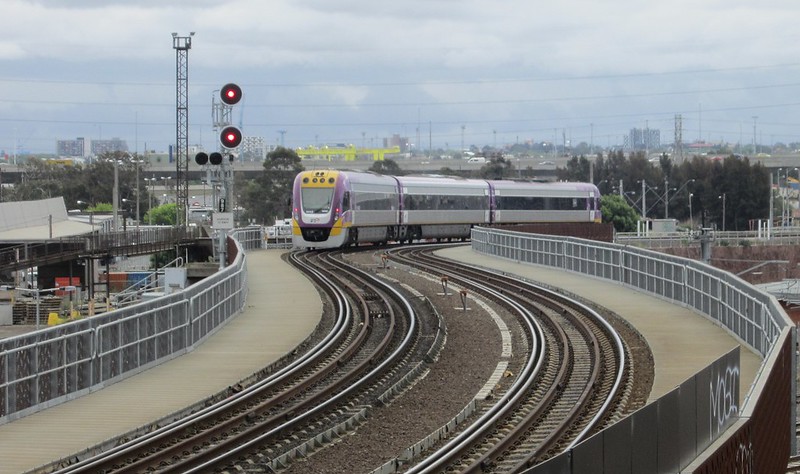 It could be better

This is not to say V/Line shouldn’t be better. I’ve written before that their timetabling results in unnecessary conflicts and delays, and how their departures from Southern Cross are a complete mess.

The operation of the new Regional Rail Link track, opened in 2015, which gave them their own route from western Melbourne into the city, leaves a lot to be desired.

For instance, inbound V/Line trains are given ten minutes between Footscray and Southern Cross — amazingly, this is two minutes more than most Metro trains, which make an additional stop at North Melbourne. Sad!

Still, the fact remains that the Geelong line is just as fast as it was in the 1950s for express trains, and in fact is much faster for services that stop along the way.

And this is despite there being far more trains on the line today — back in 1954 there were only 9 trains per weekday to Geelong. Today there are 44.

Update 4/4/2017: Another example in last night’s Channel 9 News, where one gentleman reckoned it was faster from Melbourne to Wodonga 50 years ago.

Today the Geelong Advertiser claimed “Geelong trains to Melbourne slower now than in age of steam”.

Federal MP Sarah Henderson repeated the claim on Radio National, and doubled down when quizzed about it on Twitter.

@danielbowen @RadioNational Yes it’s true. 1954 it was 55 mins, now 61 mins because we have no express service. We need #fasttrain. pic.twitter.com/VFq3aHjMeA

It’s nonsense of course. The fastest train then was 55 minutes; the fastest now is 55 minutes. So how did the Addy reach this conclusion?

In separate article they went into some detail.

A search a current V/Line timetable shows the average travel time for the 10 Melbourne to Geelong V/Line services after 5pm on a Friday night is 61 minutes.

If we’re going to compare apples with apples, the 10 services after 5pm cover 5pm-7pm. In the 1954 timetable in this time range there are only two trains:

V/Line has a lot of issues. Being slower than the 1950s isn’t one of them, and distracts from fixing the actual problems.

In fact, just as happened today, it allows the government’s response to focus on discrediting the comparison, and get away without addressing the issues.

If we’re advocating for change, we can do better.

17 thoughts on “V/Line Geelong and the “good old days””