I don’t have “get rich quick” schemes.

I kind of have “get moderately well-off, gradually” schemes.

The worst one has been buying shares. I got a tip that shares in Xero (the online accounting software company) would skyrocket. And they did, from about $6 to something like $40. But that was before I got around to buying them. By the time I bought them, they’d dropped to about $25. They subsequently fell to $15. Currently they’re sitting at $18. I didn’t buy a huge number of shares, but I’ll hold onto them for now rather than sell at a loss.

Here’s one of my crazier schemes:

"We all live in a Lego submarine…" 🎶 pic.twitter.com/IFfMnJpOWX

Before Christmas I spotted this at one of the local toy shops: Lego set 21306: the Beatles’ Yellow Submarine.

Ooh. Alas, I didn’t get it for Christmas, but I thought maybe I’d go buy it for myself.

My mate Josh used to talk about Lego as an investment. Some Lego sets are very limited runs, and over time become quite valuable, especially if in the original box, unopened.

It got me thinking… maybe I should buy two? Keep one for myself; keep the other for, say, five years, and sell it on. I might make my money back, meaning the set I keep is free.

It had vanished from the toy shops. All the toy shops. Chains like Big W and Target had it listed on their web sites, but out of stock. I checked a bunch of them, including checking with a friend who runs a shop that sells Lego. No luck. All gone. No more coming. 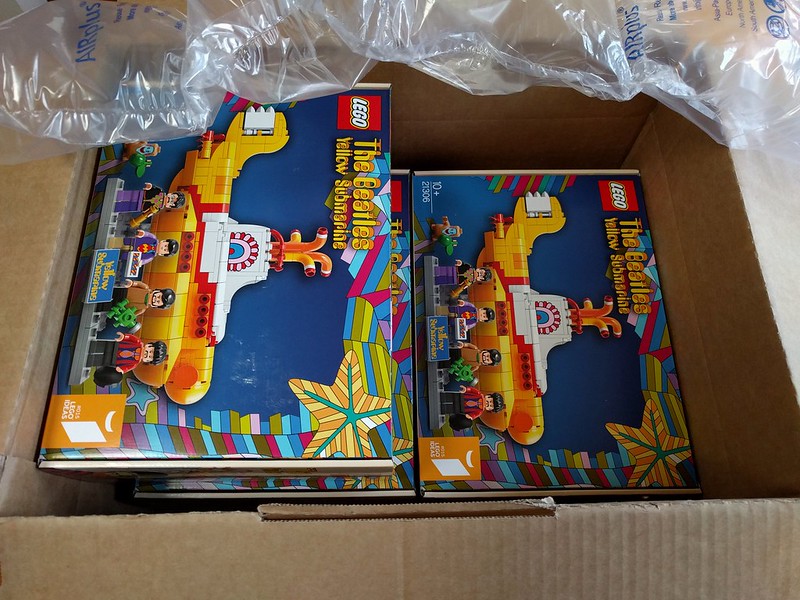 My last hope was the official Lego online shop. The catch is you pay an eye-watering $25-35 for shipping.

This may be my silliest investment scheme yet, though even now the set is listed on eBay at a “Buy it now” price of around $120. Who knows if they’re actually selling at that price.

I’ll let you know how it went in about five years.

7 replies on “In the town where I was born”

Not that I’ve ever done it, but I’ve theorised about ‘peak nostalgia’. Happens about when people’s average personal wealth peaks – ie approx age 60. Things bought would have been associated with good times in that person’s youth.

Apparently old valve radios got very expensive but have now dropped as those who remember and appreciated them got old, sold off their collections, moved into a home and died.

Retro computer games, walkmans, ghetto blasters and the like may or may not still be on the upward swing. Before the price rise there may be a period of scarcity where they become less common as many got binned and they’re considered too old for garage sales or op shops.

But slightly newer stuff may have a period of ‘peak garage sale appearance’ when stuff is cheap and plentiful. Possibly stuff from the 1990s and 2000s at the moment. So you might buy that and wait a couple of decades.

The big opportunity cost of course is storage space – that is unless you live on a farm. And by definition that will be in a low density area with less likelihood of garage sales to buy stuff at.

But if you’re in a suburban house with a garage and sell the car so there’s more room then it could be a goer. Another potential benefit of going car free.

eBay does let you show sold listings, looks like they are selling for around $115 including postage from Australian sellers. Give it a few years after it is discontinued and the price should rise. Even look at the Wall-E which is going to be retired soon, $69 retail but over $100 on eBay.

I was disappointed by the Caterham Seven, overpriced and less functionality than the original idea. I am waiting for the Saturn V to be released…

Who cares if it’s a silly investment? A very clever and creative toy for Beatles’ fans. I’ve never seen Lego like that. What a great buy!

My 7 year old son is Lego Mad. He is very careful with his creations so there is hope yet! I’m going to Hong Kong next month. Does anyone know whether Hong Kong is a good destination for Lego buyers?

He he. You took investment advice from Josh.

If you still want two of these sets,……

I have noticed some sets today at the Fountain Gate Toyworld. Down near Myer on the upper level. Think they are selling for $75??

I have also some responses from a facebook group of Melbourne Lego fans, known as MUGs. Toywords at Southland and Epping still have some sets too.

@Jim, the post says: “The sets arrived today.” – I already have all the ones I want.