The plan was to head up to Queensland for a couple of days. For a short break, but also to visit my Dad’s memorial bench at UQ, and see my uncle Frank.

I devised a plan to fly into the Gold Coast so that (given nobody else was coming) I could have a look at the Gold Coast Light Rail, which was built after my last visit in 2011. And as a bonus, my sons were flying back from their holiday on Tuesday, so I could meet them at Melbourne Airport on the way home.

Given the offspring would be flying in all the way from the USA, probably tired, and I’d be going to the airport from Footscray, I thought I’d drive, so booked the long term car park.

A couple of days before departure, the Airport web site sent me an email inviting me to upgrade to undercover parking at T4 for an additional $20. Given the weather forecast for the Tuesday was hot, I considered this, and tried clicking the link to see if it gave any more details. It… didn’t work. Okay, never mind then.

Come Sunday morning I found myself driving around the long term car park, hunting for a space. Given it’s the cheaper, less convenient option, it was remarkably full. This, according to their slogan, without a hint of irony, is “Parking to be proud of”. 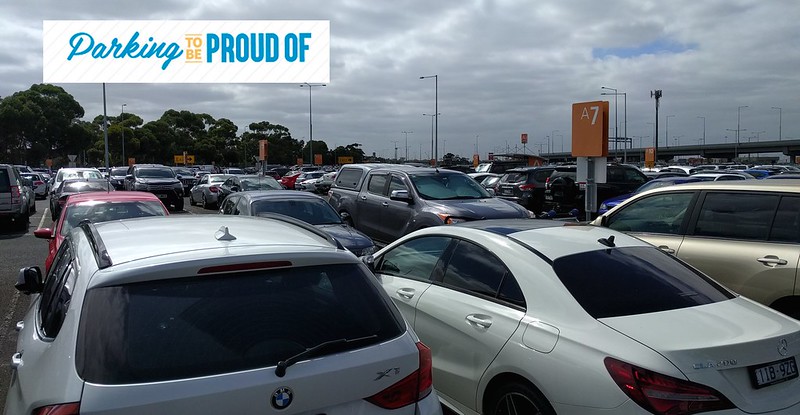 Eventually I found a space not too far from the northern end, and rather than wait for the shuttle bus, walked to T3 (Virgin) to check-in.

(Memo to self: the farther ahead you book airport parking, the cheaper it is: one day it was quoting $35 for 2-3 days, a few days later it wanted $50. When you nominate your in and out times, they’ll actually give you an hour’s grace either side of that. And the prebooked rates are tiered the same way as walk-up rates; more than 48 hours and you’re paying for up to 72 hours. Which makes me wonder if I’d gone say six hours over my nominated time, but under 72 hours, would it have charged me extra, or not?)

Possibly foolishly I booked in one of my bags – they were both pretty small, but I do like not having to carry too much stuff around the airport.

Unlike the car park, the flight wasn’t entirely full; I managed to score three seats to myself.

The complimentary small rye roll with cheese was nothing lovely to look at, but tasted okay, and it was all I’d be getting for free on Virgin. I bought an egg and chive sandwich to complement it, since it was lunchtime. (The flight attendant did offer me another rye roll.)

Despite dire warnings (via email and text) of delays around Coolangatta, the flight was on time all the way, though as usual my ears did their thing on the way down. I wasn’t the only one – it seemed like all the babies on the flight were also having a bad time.

At Melbourne, some rows had boarded via the pier, others had the option to board via the tarmac. I like to think of it as the rock star option. At Gold Coast Airport, it was all via the tarmac. It’s not a big airport – it reminds me of Hobart but busier, and while Melbourne is sometimes called a car park with an airport attached, Gold Coast was more like a food court with an airport attached. 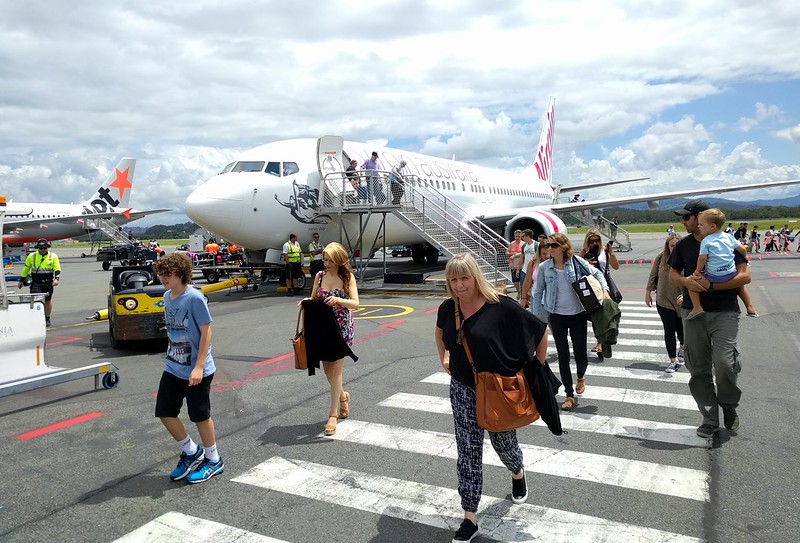 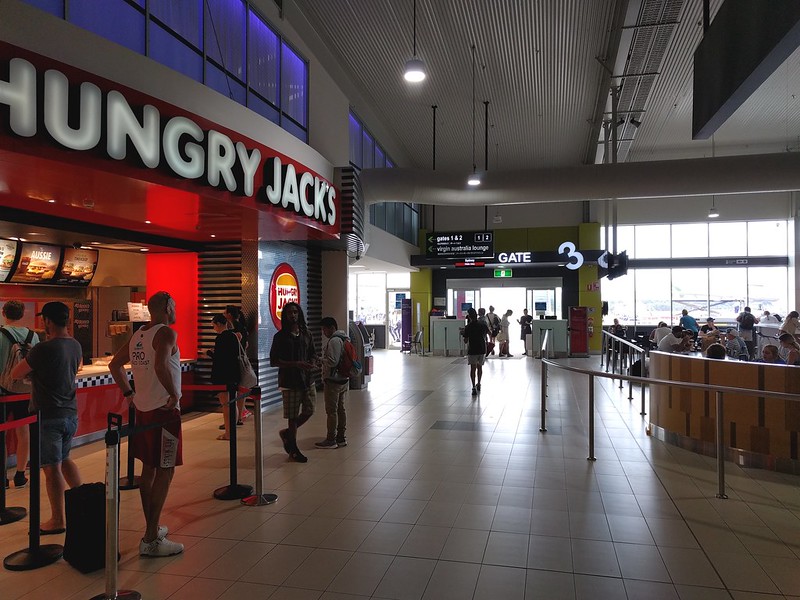 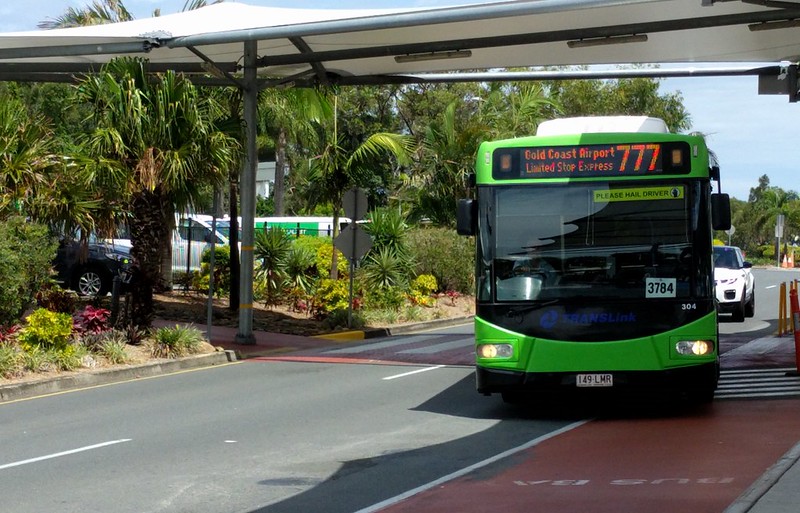 I picked up my luggage and headed for the bus stop, which was easy to find — straight out of the terminal, follow the signs, about 50 metres. This is in stark contrast to the PTV bus stop at Melbourne Airport, which is a hike to a bus terminal way down past terminal 4 in the “transport hub”.

In fact, Translink have quite obviously put some thought and effort into their airport route overall.

The bus route is number 777, so the number is easy to remember thanks to the mental association with the Boeing 777. (Did it used to be route 747? I don’t know.)

It’s a limited stops route running from the airport to the southernmost terminus of the light rail, so if you’re a bewildered tourist, you’ll have no trouble navigating this. No danger of missing your stop. And it runs every 15 minutes every day of the week, until after 11pm.

Evidently the 777 gets pretty busy; our bus was pretty big, with special luggage space, with only about ten people aboard. But I saw double-deckers on the same route.

There had also been warnings of disruptions on the tram. Earlier in the day one tram had been derailed when hit by a fire truck, causing long delays — happily the service had resumed by the time I got there.

The tram took me to Cavill Avenue in Surfers Paradise, and I went and found my hotel and checked-in.

It was a very nice room. Very nice view across the river. 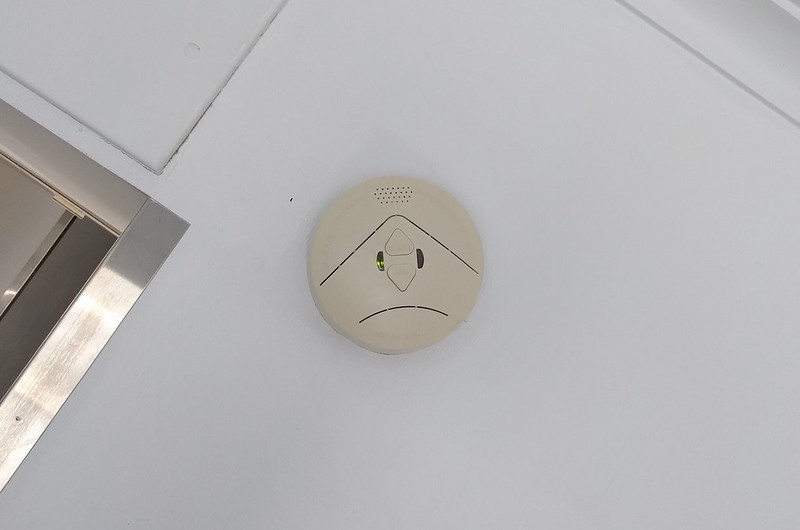 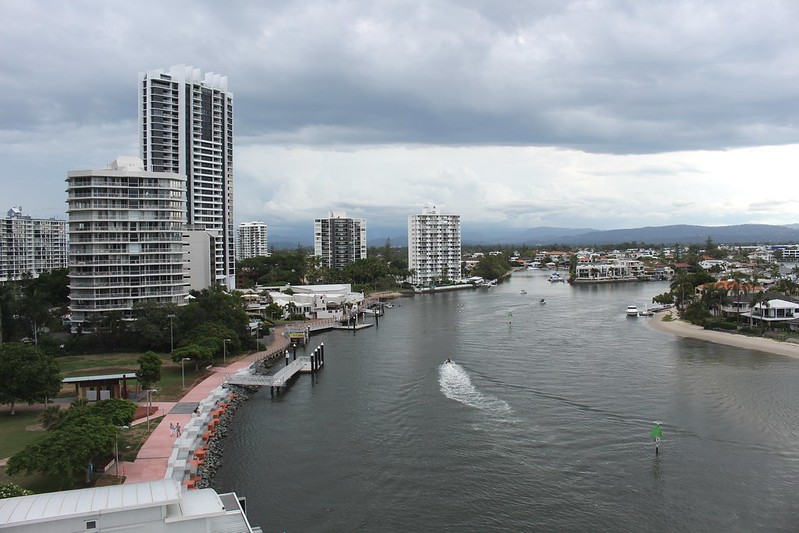 They only have free WiFi in the hotel lobby, which I suppose might be a way of socialising with your fellow guests… if everyone wasn’t so intently staring at their screens.

M couldn’t come on this trip, so after settling in, I headed out for some tram joyriding. Seriously, I saw some things this new(ish) system can definitely teach Melbourne. Lots more about this later.

I got back to Surfers Paradise and walked around for a bit. It was drizzly though warm, and most people had vacated the beach.

Eat your junk food between the flags 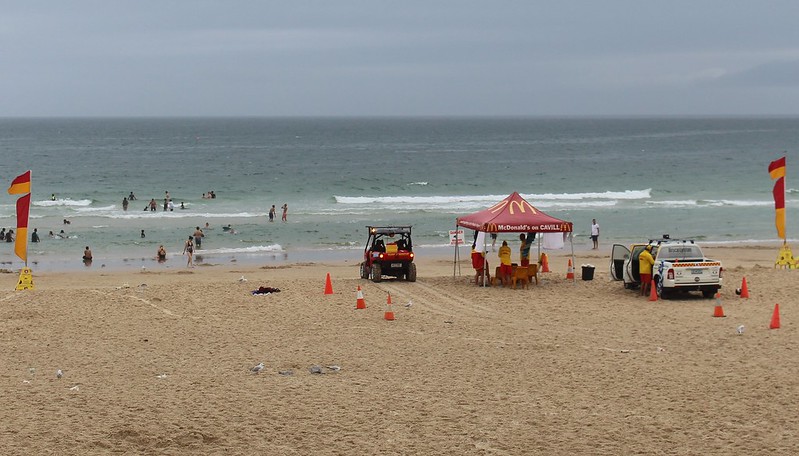 Looked around Timezone, pondering playing a few games, then discovered the minimum you can load on a new card is $20… yeah no thanks. (Shame, I have an old card from 2011, possibly with some credit on it, that I’d left behind at home.)

Ducked into an underground Woolworths to get a couple of things. Amazingly busy, as they often are in tourist areas. I noticed there’s also a Coles and another Woolworths in close proximity.

The drizzle had given way to full blown rain by this point, though apparently Brisbane had around 80 mm. Out with the umbrella and I walked back to the hotel for a cup of tea to watch the sunset and listen to a nearby club with a cover band belting out greatest hits, including a set closer of an extended elaborate version of Paul Kelly’s Dumb Things. 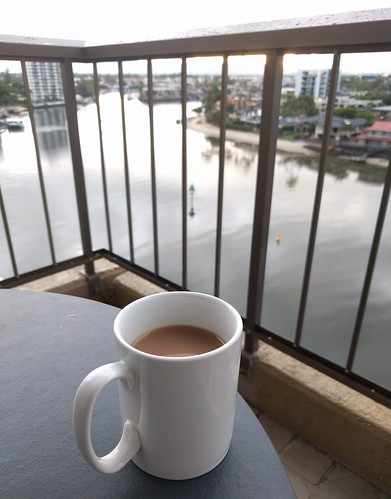 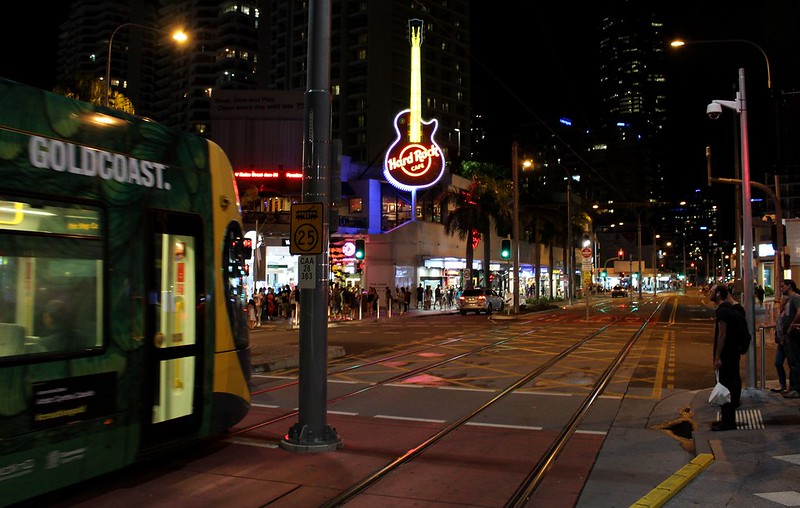 The rain stopped and I was hungry. Google reviews indicated a good pasta and pizza restaurant nearby called Salt Meats Cheese, which did me a very quick very tasty prosciutto and rocket pizza.

After that a further walk around along the main street, Surfers Paradise Boulevard. It was still pretty busy out. I assume there’s a lot of CCTV – on some traffic light poles I found warning signs that the council is busy filming you. 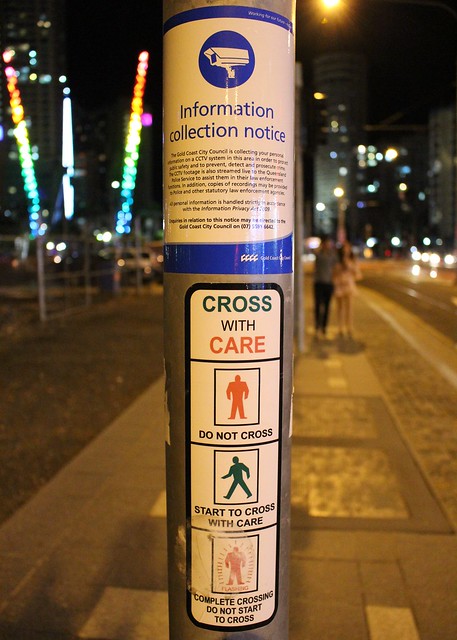 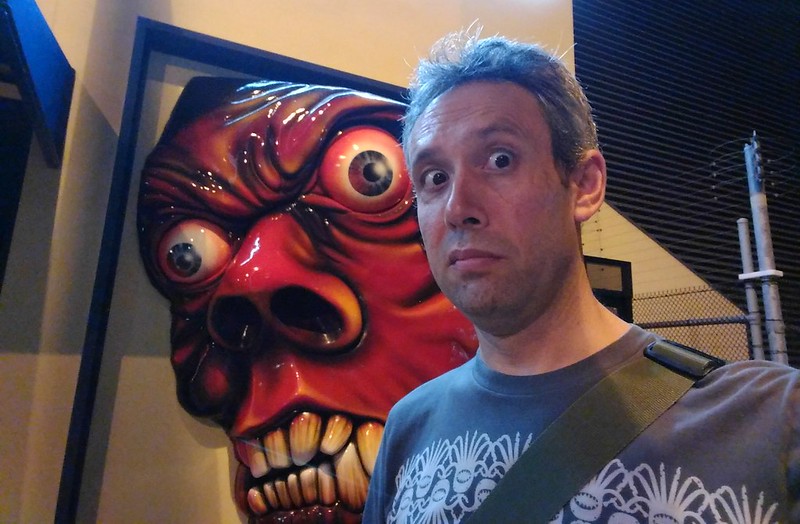 Back to the hotel. I grabbed a complimentary copy of the Courier Mail in reception, and relaxed for a bit and flicked through the paper.

Getting ready for bed I spied a cockroach crawling up high on the wall. Eugh. Sigh. Oh well, I whacked it with the complimentary newspaper and it dropped off the wall dead, fortuitously straight into the rubbish bin below. No big deal, but the usual thing with the creepy crawlies is that if there’s one, there’s probably more lurking. I mentioned it the next morning when checking-out.

To finish this post, here’s the view along the Nerang River — as spectacular as night as it is during the day. 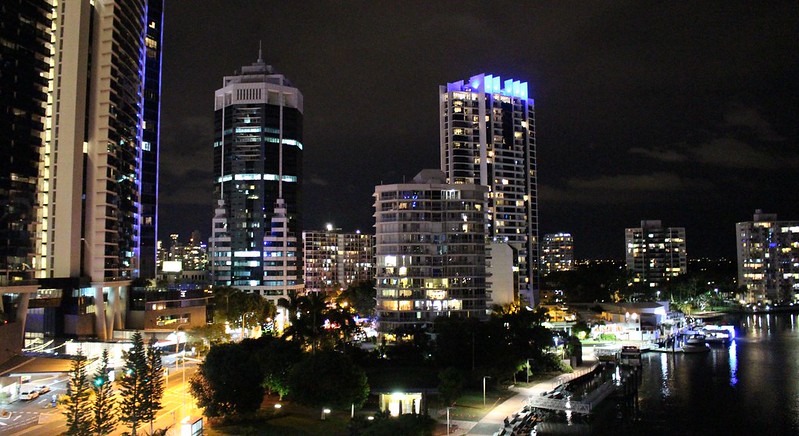 (This post backdated to the day it occurred. Posted on 18th January.)

8 replies on “Gunzelling on the Gold Coast”

Looks like a nice trip Daniel! Were you staying at the Vibe in Ferny Ave? Used to stay there a bit in the 80s when it was the Chevron Hotel.

Did you notice whether it’s still the case you can’t buy Go cards at the airport?

Montréal has a bus route that uses a similar name called the 747 bus that runs from the airport into the city.

I probably should wait until you post about the light rail but we found it just brilliant, especially the priority given to the vehicles at traffic lights, making me very annoyed at how traffic light priority for trams is being reduced in Melbourne, with the latest effort at Victoria, Franklin and Swanston. It was not a problem when waiting for the usual very short time for the light rail, but a bit problematic to validate your card at the stop when running for the tram. We actually forgot to do so.

I had low expectations of the GC and I was quite surprised that I really enjoyed our stay there. Surfers has a very village like feel to it.

A trick I use on aircraft accent/decent is to suck on a boiled lolly or Anticol. Air NZ used to give them out.

Glad you had a nice short break. Did you successfully rendezvous with your boys or did the various flights not arrive as expected?
Two week’s long term carpark at Melbourne airport costs around $80 if you book a few months in advance. Like you, I always park close to the short term car park end and walk to the terminal rather than wait for the bus.
PS the photo of you next to the scary picture make you look like you’ve got a rifle strapped to your back.

We must have almost crossed paths… I was in and out through Gold Coast Airport on the 10th of Jan, then back to Melbourne on the 18th.

I haven’t been on the tram yet (we were staying up in the hills, so had a week with a rental car), but was very intrigued. Last time I was on the Gold Coast, it was still being built.

Also very interesting on the Gold Coast is the suburban train line. They had a steam-era railway from Brisbane down to Southport, with a branch to Tweed Heads, but was closed in the pro-car political era of the 1960s. Thirty years later they started rebuilding it. Eventually it’s meant to connect to the Gold Coast Airport, but in the meantime, it means that locals can actually get on the train and go all the way straight through to Brisbane Airport in the other direction.

Tram and train will interchange at Helensvale (at the northern end) from early next year. Tram may also extend southwards to the airport in future, or have a southern connection to the trains at Varsity Lakes or somewhere.

@Tony, correct it was the Vibe. I don’t recall seeing anywhere at GC Airport to buy a Go Card, but I wasn’t looking, as I had one from 2011. (If it had been Myki, it would have expired after 4 years.)

Confusingly, the web site says you can buy them at GC Airport, though on the Retailer Search it doesn’t show any outlets at the airport that you can buy a normal Go Card. Modify the search for the tourist version, and it comes up with results. You can also order them online, which is how I got the card originally in 2011.

@Drew, I usually have chewing gum. It helps a bit. It also distracts if I’m nervous during take-off.

@expat, there doesn’t seem to be any push to extend the rail line, but I did see duplication work, and I did see works to extend the tram. Some of the land between Broadbeach and the airport seemed almost semi-rural though, so I wonder how much of a priority it is. Mind you, if they need large (some double-deck) buses every 15 minutes to move the crowds, perhaps it makes sense.

Regards extending the rail line, it hasn’t had the media attention of the light rail southern extension (which will happen far sooner), but is definitely in the early planning stages. Although apparently it can’t start until Cross River Rail is complete due to network capacity constraints. But preliminary stuff here: http://www.tmr.qld.gov.au/Projects/Name/R/Robina-to-Tugun-Rail-Impact-Assessment-Study