The Night Network trial, in particular running the trains all night on weekends, isn’t perfect, but has solved a lot of problems.

But there’s one problem it hasn’t solved: connections to Sunday morning V/Line services.

Take for example the 7:05am from Southern Cross to Seymour and Albury. Before Night Network, you couldn’t catch a Metro train to connect with this service — the first trains arrived about an hour later.

This problem isn’t fixed. Why? Because Southern Cross Station doesn’t open for suburban passengers on Sunday morning until after 7:30am.

The Metro suburban trains run all night, but they don’t stop there. 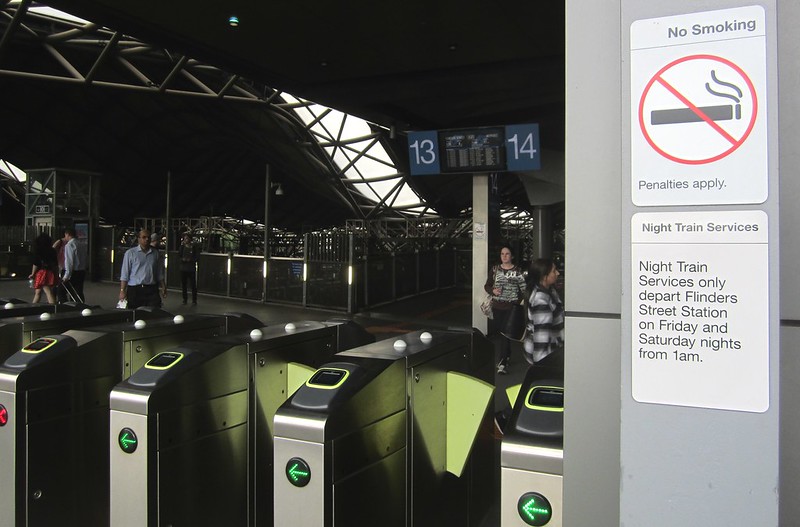 SCS is a privately run station. The contracts are here, but all I could find with regard to operating hours is that they are set by the Southern Cross Station Authority… not what they actually are.

The SCS web site doesn’t have useful information like opening hours. But it does promote their latest parking special offer (!). Supposedly their Lost Property office is open from 6am.

The PTV web site has a detailed page about the station and its facilities and services… but also doesn’t specify opening hours. Ditto the Metro page. V/Line reckons 6am, but as we’ll see, trains don’t stop there that early.

Obviously at least some platforms must open by the time the first trains are due to depart.

What time are the first Sunday morning trains from Southern Cross?

(From January there will also be a 7am train to Warrnambool.)

There are also morning coaches to Halls Gap at 8:15 and to Nhill/Horsham at 8:15, from the coach terminal, which is also where Night Coach services depart at 2am to regional destinations. (You can’t connect to those via Metro train either.) 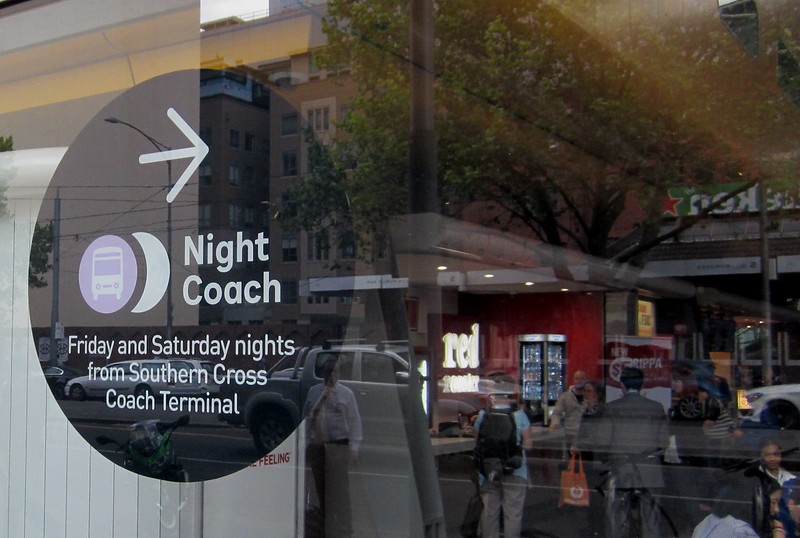 These times haven’t changed with Night Network. From 1am until these times, suburban trains run direct into Flinders Street, and those lines that do run via Southern Cross all night (Werribee, Sunbury, Craigieburn, Upfield) don’t stop there.

The PTV Journey Planner appears to want at least a 15 minute connection to V/Line services, so if you ask it to plot out a journey from Sandringham to Ballarat on a Sunday morning, it tells you to catch a 7am train from Sandringham, arriving 7:30 at Flinders Street, then catch another Metro train to Footscray arriving at 7:50, and change there for your Ballarat train at 8:23.

In contrast Google Maps says you can catch the 7:30 train from Sandringham, getting to Southern Cross at 8:05, changing to the same Ballarat train leaving there at 8:15. You just saved 30 minutes and one change of train by using Google instead of PTV.

That’s just one example. If you wanted to catch the first train to Geelong (7:50) there are similar challenges coming from most of the Metro lines. 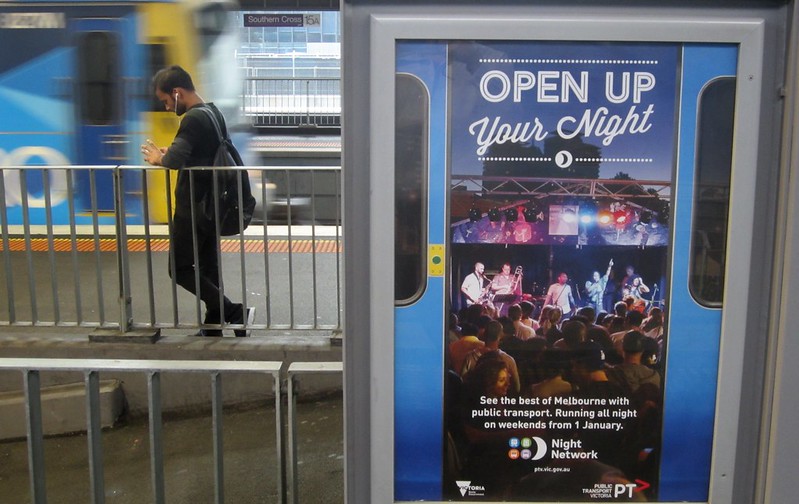 If you’re trying to get to Southern Cross but your Metro train skips it, you have to change services somewhere else, and either walk or catch a Night Bus or Night Tram through the CBD to make the connection.

The most obvious connection point would be Flinders Street, but none of the Night Trams connect from there to Southern Cross. (That’s the same in daytime too, but obviously there are lots of trains for that trip during the day, so it’s easy.)

You can use the 941, 942 or 952 Night Buses from Flinders Street to Southern Cross Coach terminal (about a block from the Bourke Street entrance for trains).

What about… opening Southern Cross earlier?

It’s astounding that as part of Night Network, they organised to run the entire electric Metropolitan train network all night… except for Southern Cross, the second busiest station on the network.

Could it be the private operator wanted a fortune to open it all night? Is this yet another warning sign that PPPs aren’t all they’re cracked up to be?

Or did the government just not get a contract variation organised in time for the trial to begin at the start of 2016?

Perhaps it makes sense to funnel all-night travellers into Flinders Street, to centralise things like security and customer service.

But at the very least, trains should stop a little earlier at Southern Cross on Sundays to make connections to V/Line, and access to Docklands and the western end of the CBD easier.

Even if it’s too hard to divert direct trains from the southeast/east/northeast through the station, the north/western lines already running through Southern Cross should stop there after 6am, when supposedly the station is open.

I really hope Night Network is made permanent, but it does need tweaks to make it more financially sustainable (more about this later), and more useful for passengers.

Update September 2020: Since this article was written, some earlier Sunday morning trains do now stop at Southern Cross, including:

Opening hours are dealt with in KPI 4.1 of the contract – from 30 minutes before the first train to 30 minutes after the last train. This suggests the timetable drives the opening hours, not the other way around. Of course the KPI would not work for all night services, but it shouldn’t prevent PTV/Metro scheduling all services after 6 AM to stop at Southern Cross.

Perhaps the issue is with PTV/Metro, not the station or the contract? Perhaps they just made a “one stopping pattern fits all” decision when timetabling the night trains, and didn’t think through this connectivity issue?

Another inconvenience: If you arrive on an early Sunday morning flight and take the Skybus from Melbourne Airport to Southern Cross Station, you find that you have to go to Flinders Street Station to catch metropolitan train services.

@Not My Name, thanks. Also I’ve been reminded that from January, there will be a 7am Sunday morning train to Warrnambool. (Have added it to the post text.)

@Kam-Hung Soh, yes good point. Coming and going on the 24-hour Skybus would be easier if the trains stopped there.

Another transfer inconvenience: the first ferry to Portarlington on Sunday morning leaves Docklands at 7.15: http://www.portphillipferries.com.au/schedule-pricing/

… and the first weekday ferry departs at 5:15am. I think it’s merely a positioning run for the first inbound trip ex Portarlington and they wouldn’t seriously expect significant patronage. Saturday is the only day you could get a train to the first ferry.

1. The 7.05 Albury train is really the only one you can’t get to by Metro train (and the new early Warrnambool one). That could be fixed by having trains to and from North Melbourne stop at Southern Cross an hour earlier than currently.

2. The other V/Line trains can be reached, as the first two Metro trains from Flinders St stop at Southern Cross at 7.39 (to Lilydale via Loop) and 7.42 (to Sunbury via North Melbourne). So if you are coming via Richmond or Jolimont you might have to wait a while at Flinders St if you want to catch the 7.50 to Geelong, but it is doable. From Craigieburn/Upfield, you’d have to go to Footscray from North Melbourne. The 8.04 to Traralgon/Bairnsdale you can catch at Flinders St as well, I think. The other trains to Ballarat, Sydney and Bendigo all depart after trains are running through the Loop, so you might be able to get to Southern Cross on all lines without changing trains.

3. It might not be a problem that the 2am regional coaches are not accessible by train. I imagine most users are already in the City and can get to the coach terminal by tram or bus from the eastern end of the CBD. But it is a problem, maybe there could be a bus connection from Flinders St before 2am.

4. I think the coaches you mention at 8.15 are connections to the train at Ararat. The only morning coach departure I could find from Southern Cross was the 8:50 to Yarram.

5. The Journey Planner example is interesting. A risk averse person might want a longer connection time to a V/Line service, because of greater consequences for missing the connection (can’t just wait 20 minutes for the next one). So a question in this example as to whether 10 minutes is enough, or you take 30. But the train to Footscray in the Journey Planner example stops at Southern Cross, so why not make the connection there?

6. I think it makes sense to converge all the train traffic to one station during the wee small hours. And the trams and buses are also converging on the 9 City blocks adjacent to Flinders St.

7. Maybe while Southern Cross is closed in the wee small hours Skybus could make an ‘on demand’ stop at Flinders St for those wanting to make a train connection.

@Peter you might be right, I took the train to SCS and got the 7.15am ferry yesterday, and there were only 2 other passengers. Far outnumbered by the crew, but I assume patronage will grow.

Interesting how much promotion the Southern Cross Station Authority are having to do to get a financial return from about 500 car parking spaces. When the DFO shopping centre opened I checked the car park, and it was virtually empty. The old business model of paid parking being a reliable money spinner no longer appears to work, particularly when other DFO’s have free parking. So they’re having to promote it as event parking. But there are lots of other competing event parking places in its vicinity, such as Docklands stadium ($25) and Harbour Town ($10).

Curious to know what tbe Offi app says for the same trip planning?

My understanding, whatever the issue is here, is why the Geelong line is a coach, and not a train.

I also remember comments that, the contract would need to be redone, and Southern Cross would have the power to request whatever costs they want, for all services, not just for the extra.

We can not just pay a little bit extra to run the extra services. We must talk about the existing contract too.???

Several years ago I arrived at Southern Cross at something like 6am from the overnight XPT from Sydney and found the next train to Flinder Street was two hours later and I eventually decided to walk there.
I’m not sure if this situation remains today.