The western end was built as the “South Road Extension” as two lanes (one each way) just last decade. It mostly wasn’t dual carriageway, but it was otherwise suspiciously freeway-like. Having appeared in the 1969 freeway plan, it wasn’t difficult to see that it would be expanded.

Sure enough in 2010, it was announced it would be expanded to four lanes (two each way).

So wouldn’t making a road three times as big be likely to lead to problems on the roads it connects to? Why yes.

What a surprise — it seems South Road now has congestion problems: 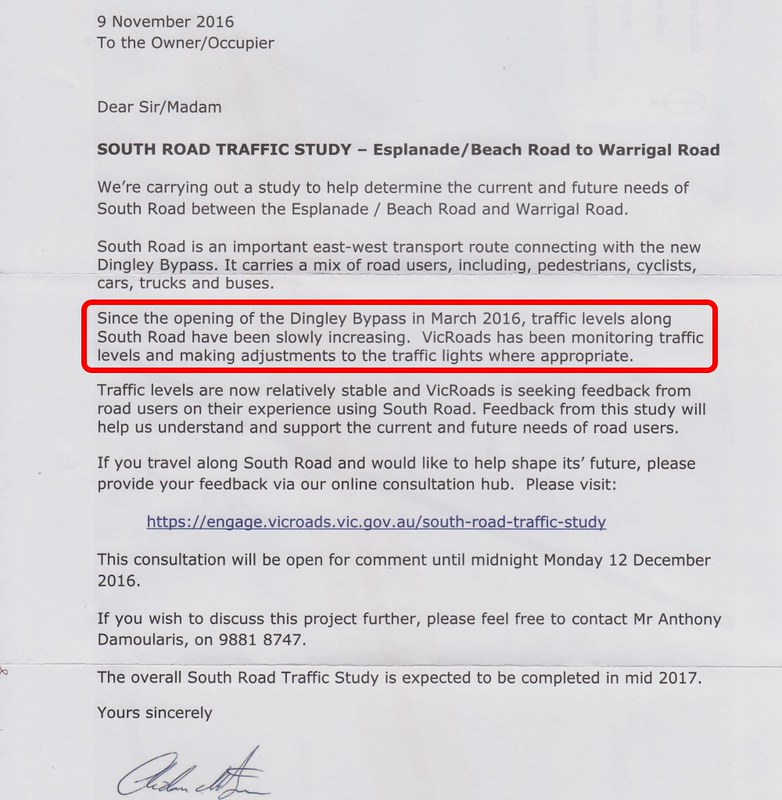 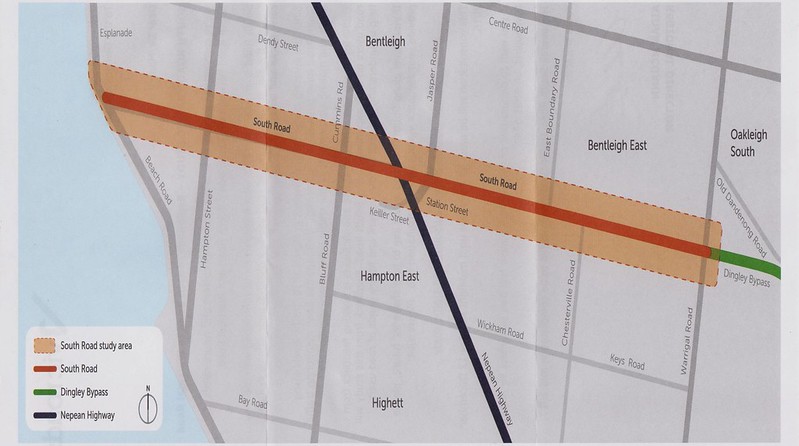 Having fed lots more traffic into South Road, what can they do? Currently through Moorabbin it’s six lanes (three each way, but with one taken by parking). They could try and fix this bottleneck by imposing clear ways — effectively expanding traffic capacity by 50% and leaving a long mostly residential stretch of the road as a huge six lane traffic sewer. Eugh.

Making the environment even more hostile to pedestrians, bus/train and bike users sounds like a great way to produce even more traffic. (The intersection of South Road and Warrigal Road is horrible.) And it would probably just move the bottleneck elsewhere. Nepean Highway next for widening, perhaps? 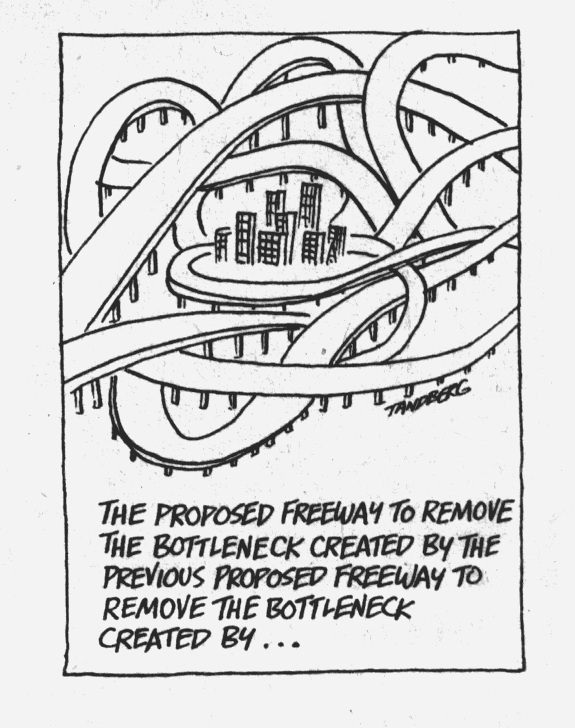 Even with no more road expansion, more traffic lights might be needed to help pedestrians and cross traffic now that the road is more congested — especially at the eastern end around the Sandbelt Hotel. (Somewhere I saw an online petition for a pedestrian overpass; I can’t find it just at the moment.)

Meanwhile, the main bus route along there is only every 20 minutes on weekdays (including peak hours, when it no doubt gets stuck in traffic), and every hour at night and on weekends. Most other suburban routes run even less frequently — generally only every 30 minutes on weekdays. No wonder so many people are driving.

I don’t know quite what the solution is. But I do know that free-flowing urban traffic is a myth. At least if there’s a bottleneck now, it’s preventing traffic levels growing even more.

Ways have to be found to move more people around the suburbs them each bringing a two tonne chunk of metal. Expanding road capacity further is the last thing we should be doing.

“I don’t know quite what the solution is. But I do know that free-flowing urban traffic is a myth. At least if there’s a bottleneck now, it’s preventing traffic levels growing even more”

The solution is easy to implement (road network pricing) but politically difficult (similar to Skyrail).

Perhaps the new route along the Dingley bypass, South Road and the Nepean Highway is attracting traffic that previously used Eastlink, the Monash Freeway and Citylink. If traffic light green time is increased in line with traffic demand, the suburb will become over-run with traffic. So it’s up to local residents in to resist changes to traffic light green time that favour the toll avoiders.

Here are chunks from three of the four pieces Mumford wrote for the New Yorker in Spring of that year.

The fact is that motor transportation is the sacred cow of the American religion of technology, and in the service of this curious religion no sacrifice in daily living, no extravagance of public expenditure, appears too great…

I half expect to see the old South Road being converted into a freeway like road with grade separations all along its route.

Having said that, I prefer a decent bus network in the area.

“They could try and fix this bottleneck by imposing clear ways — effectively expanding traffic capacity by 50% and leaving a long mostly residential stretch of the road as a huge six lane traffic sewer. Eugh.”
It won’t increase traffic capacity by 50% although VicRoads will probably claim it despite all the traffic engineering text books stating that there is a decrease in efficiency everytime you add another lane because of people changing lanes more often. Plus if there are driveways, bus stops & no bike lanes then the left lane mearly become a stopping / turning into side streets and driveways / bike lane that most motorists will try to avoid if they want a clear run and not be held up.

“What a surprise — it seems South Road now has congestion problems:”