Some 2-3 months after they all re-opened, Ormond, McKinnon and Bentleigh stations are still being worked on. There’s been a flurry of activity this week ahead of the “Family Fun Day” tomorrow – featuring music, food stalls and a double-ended steam train with old “red rattler” Tait carriages to run between Caulfield and Moorabbin (stopping at the three new stations).

At McKinnon they’ve installed metal plates to wrap around the bare concrete, which makes it a bit more presentable. 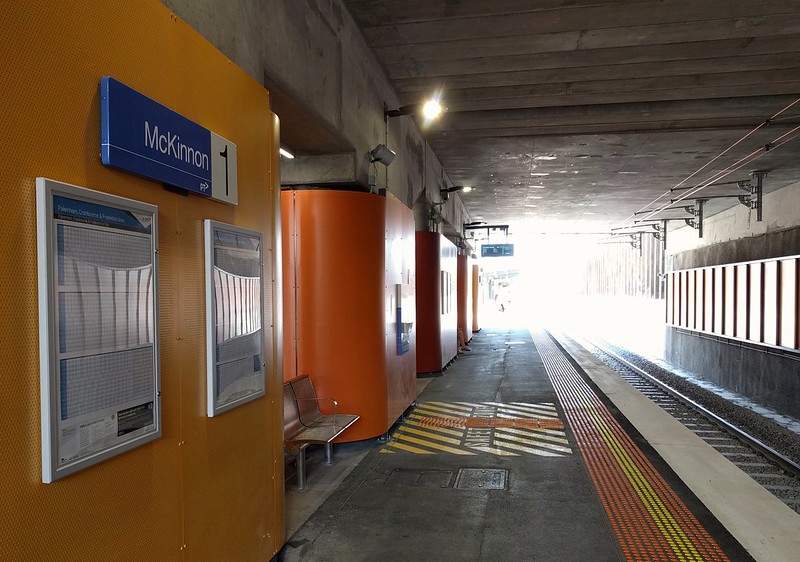 Along Nicholson Street, the palm trees seem to be doing well. The numerous other trees are gone for good, however. 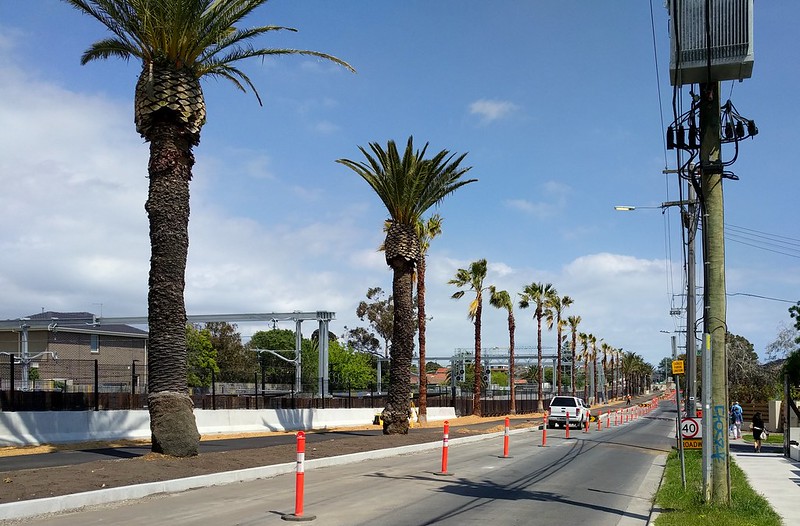 At Bentleigh station, a vast car park, stretching all the way down to the electrical substation at Blair Street, is under construction. Google Maps says it would take you a full five minutes to walk to the station entrance from the northernmost end of the car park. On the bright side, the shared (eg bike) path now runs parallel, rather than sending cyclists through the car park as before. 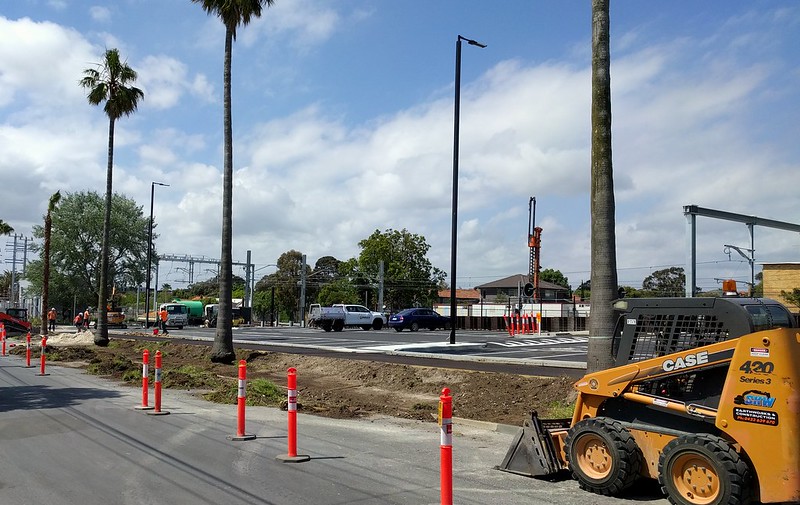 The progress on the car park has been pretty fast. The bike cage? Disappointingly, still not finished, with little visible progress in the past few months. 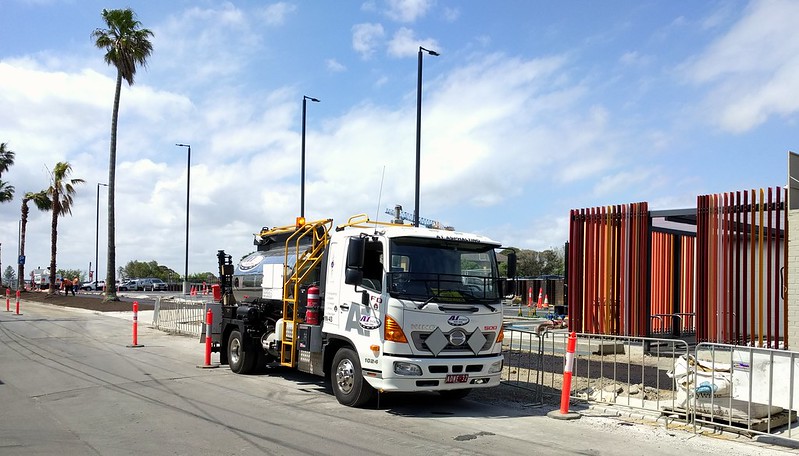 The traffic lights adjacent McKinnon and Bentleigh stations have been commissioned. 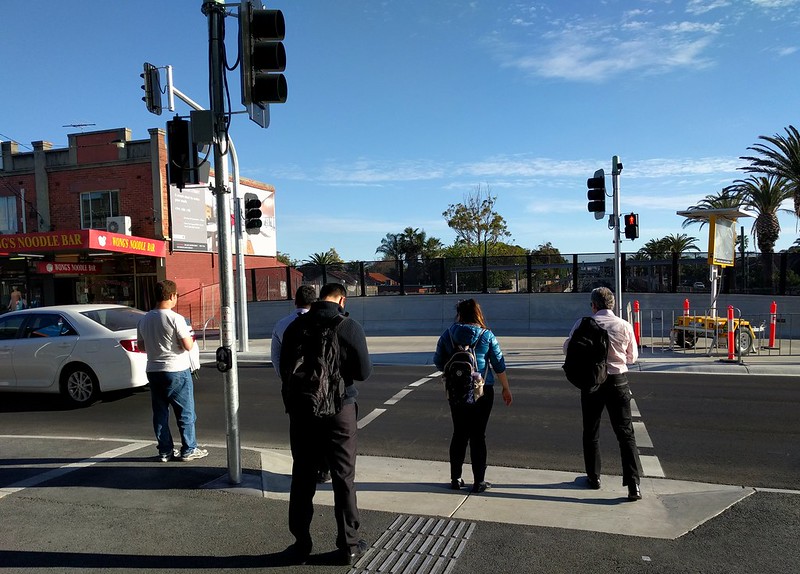 A red bulb (well, a cluster of LEDs) that was not working on the first day had been fixed by Thursday night.

Might want to make a warranty claim on these new traffic lights at Bentleigh station – one globe not working. @levelcrossings @VicRoads pic.twitter.com/RKe8JYYvSj

I’ve timed the lights at Bentleigh station. At night with no traffic they changed about 5 seconds after a button press — good! With some traffic around, it took 15 seconds (straight after another green man) which seems reasonable.

But another time with heavy (barely moving) eastbound traffic, there was a long wait, seemingly close to a minute. That’s just silly. Providing a green man wouldn’t affect traffic because it’s barely moving anyway – held up no doubt by the intersection at Jasper Road further east. Unfortunately I won’t be surprised to see people jaywalking in frustration if this isn’t improved.

The new westbound bus stop has its Bus Zone signs, but no other infrastructure yet. The change to the stop is very logical, but I wonder if the owners of the restaurants here have been warned about possibly having to make changes to outdoor dining to cater for bus passengers. I’m sure there’s space for everybody to coexist. 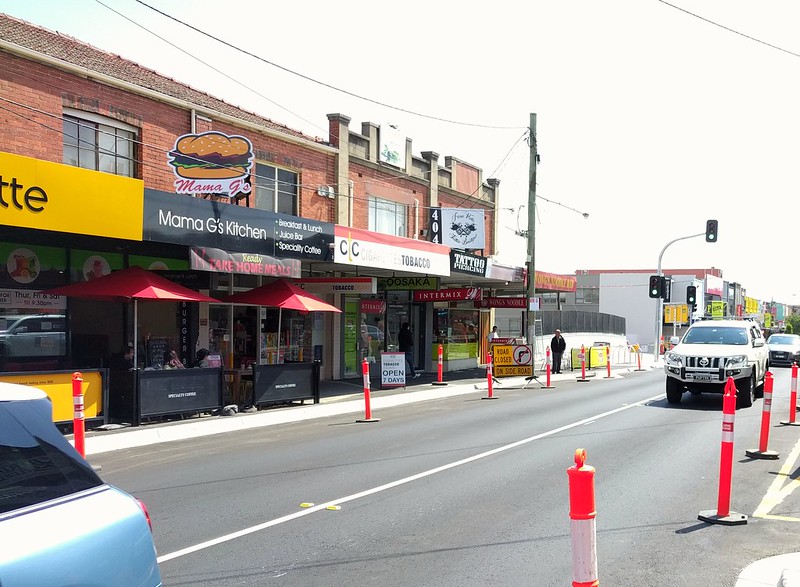 There’s no sign of the old westbound 703 bus stop. I mean literally no sign. It will be visible from here when the new one opens, but in the mean time, it’s not obvious at all where you should catch the bus. (Back up the street a few hundred metres.) 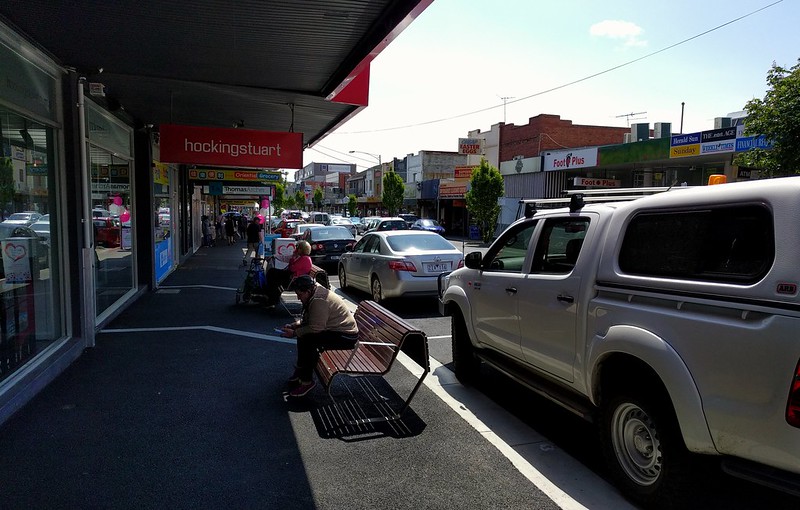 Good to see the finishing touches being applied to this project.

And as someone who always walks to the station, I’m loving never being held up at the gates coming to and from the train.

High up in the top half of the cutting by the stations the concreted area of the wall stops and there is just acres of ribbed steel. It looks pretty unappealing and half finished. On the eastern side the concreted all the way to the top and it looks much better. Do you know if they intended to do this on the other side and then abandoned the idea?

@Dan – I believe that the steel pile walls were covered with concrete so that a derailed train would be protected from impacting it and coming to a sudden stop. For this reason they only covered the walls up to train height – and the top half was left untreated.

To their credit, the authorities have ensured the trains were running normally for the maximum possible period over station construction. The few weeks of buses and no station seems very short now

Have these LX’ing removals improved travel times by car? I know that is not the intention of (most) LX’ing removals but you made the point that there is still heavy traffic in the shopping strip. I have always wondered the benefit of this claim in built up areas straddled by heavily used cross roads. Is it some kind of induced demand effect whereby drivers now use the road given the removal of the crossing i.e have traffic numbers increased since the crossing removal? Hopefully your shiny new station encourages more people to use PT further freeing up the road :)

Do the small number of shops there that have those anti-grade separation works posters still displaying them now?

Also, have the bus schedules been adjusted?

Bus stops being open on both sides of North Road is definitely welcome.

Hello Daniel, read your blog all the time, all the posts or VIC infrastructure and PT. Sometimes I feel like you are not liberal enough to make wholehearted and unequivocal positive opinions on all the infrastructure (level crossing and train system upgradation) works that are going around. Give those guy unconditional credit for what they have been doing for the pt upgrade. Being a politician or a public servant (I m neither) is a thankless job, people always keep complaining. They try to block projects that are beneficiary for hundreds of thousands of people just with an excuse that they won’t have enough sun in their backyard. East complains that west is getting all the development projects and vice versa. As an advocate for PT, sometimes just forget the nitpicking and give those guy a thank you, educate people on making sacrifice for greater good and inspire (unequivocally) the visionary govt. project.

I think that Dan has been very positive about the pt upgrade.

Unlike KM, I don’t see it as nitpicking to strive for the best outcomes in infrastructure and public transport. I disagree that there shouldn’t be commentary if outcomes could be improved.

I disagree when KM says “educate people on making sacrifice for greater good”. If the community determines that a project is for the greater good and should go ahead despite detriment to affected individuals, then those individuals should be properly compensated for the detriment that they suffer. Too often, we see penny pinching Governments try to limit the compensation for projects leaving many individuals whose amenity and quality of life is ruined without any recourse.

Tbe red and orange panels may be “presentable” but they are not exactly in keeping architecturally with McKinnon (or Ormond, for that matter). More appropriate colours wouldn’t have cost any more. Let’s hope for the LXRA’s sake they do better with the proposed design at Mentone.

I find it curious that the improved line speed (around a minute) hasn’t been used to reduce travel times for people south of Cheltenham, but to add a stop at Malvern for the expresses. The main benefits to PT users that I can see from this project have been better walk-up to the three stations and the avoidance of a Buenos Aries style disaster at North Rd – I can’t say I felt comfortable barrelling through there on an express at 50 km/h when it was still at grade.

Of course I meant 80km/h (and for those unfamiliar with the Buenos Aries accident, a bus failed to stop at a level crossing).

The inbound Frankston expresses stopped at Malvern before works began.

@Adam, there’s still a lot of traffic congestion, but removing the crossings has reduced the unpredictable long delays that used to occur. Of course this benefits pedestrians (at Bentleigh, which had no underpass) and buses (at all three).

@Arfman, all the signs seem to have mysteriously disappeared! Some local buses are getting timetable changes, and delays along Centre Road have certainly reduced.

@KM, if you’re looking for unconditional praise, you probably won’t find it here!

@Francis E, as Nick says, express trains have stopped at Malvern for some time now. Not quite sure why – it might be due to local schools such as De La Salle. The Frankston line timetable is back to normal now; apart from the addition of Night Trains, it hasn’t had any changes in several years.