I used to bank with Commonwealth Bank of Australia, who had a habit of sending me lots of letters on the same day, though gradually everything moved online.

When I bought my house in 2005, I switched to St George (which morphed into Bank Of Melbourne), and it was mostly online. 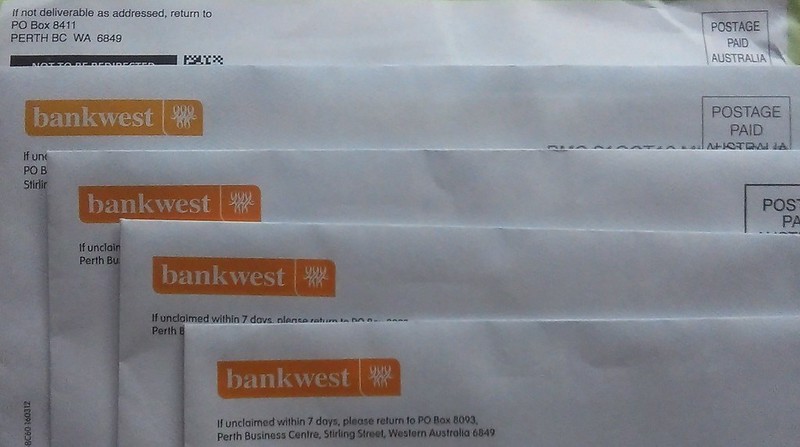 Now I’ve refinanced my home loan, and switched to BankWest, a CBA subsidiary. They’re keeping up with their parent company’s tradition: the other day I got no less than five letters from them in the mail.

I’ve now switched everything to online statements, so hopefully that won’t happen again.

The plain envelope had my new credit card. Inside was a letter, a brochure, the card, and a CD-ROM. 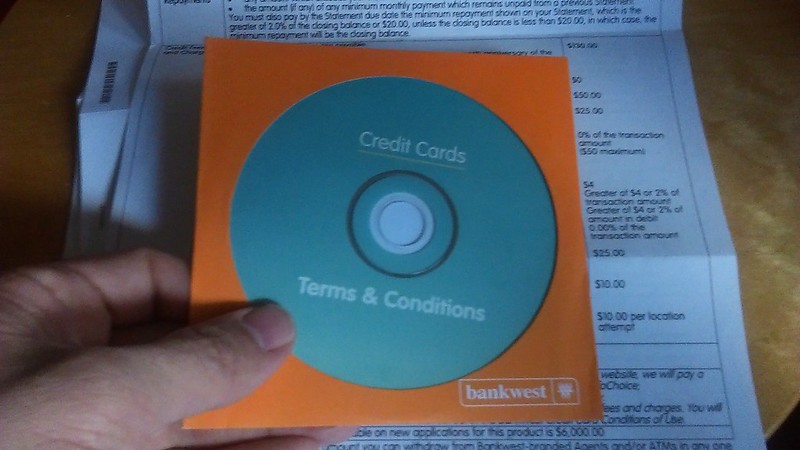 Thankfully I still have computers in the house with optical drives. Firing it up you get a big menu where you can choose which specific BankWest card you have. 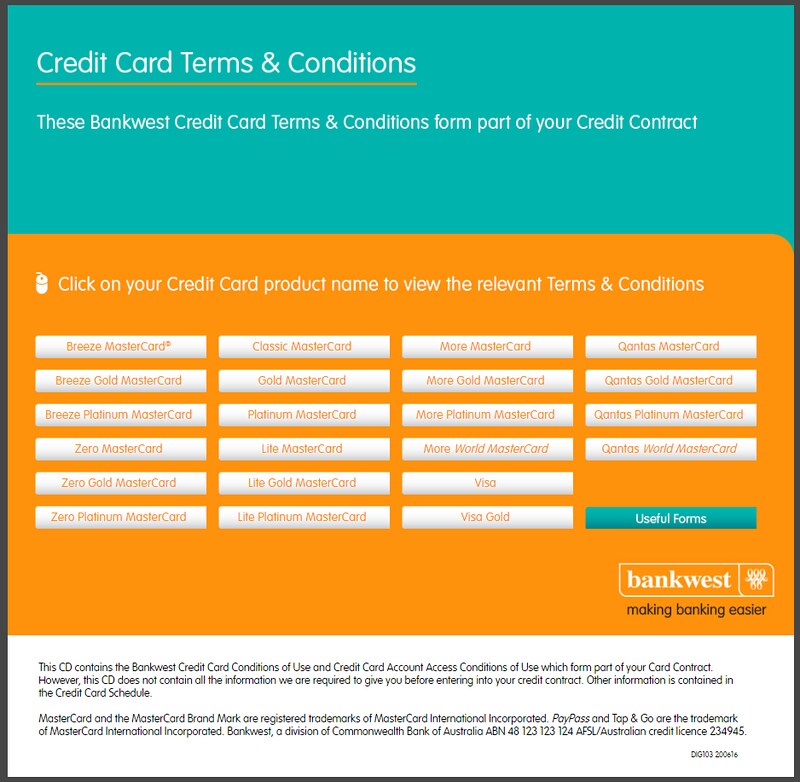 I found my card, and it showed me links to the following six documents:

Plus another was “useful forms”.

Do they really expect me to read all this? Perhaps I’ll take a day out of my weekend to take a look through it all.

And note the fine print at the bottom of the menu, which points out that there are other terms and conditions not on the CD!

The value of refinancing

I can’t emphasise this enough: if you have a mortgage and it’s been more than a couple of years since you looked at it, take a quick look now.

Interest rates are very low at the moment, but the laziness tax applies — for established customers, the rates have crept up. If you’re willing to switch, you’ll save a bundle.

I went through a mortgage broker, who explained some options and took care of all the paperwork. Really easy.

So, have a look at your rate. If it’s more than about 4.4% it’s probably worth switching.

At the very least, contact your bank and ask them what they can do to convince you not to switch. My friend Tony did this and they gave him a 0.8% rate cut on the spot.

Personally, by switching banks I’ve gone from 5.2% to 3.8% (ish), saving me about a third of my interest bill. Even with the fees involved, after about one payment, I’ll be saving hundreds of dollars every month.

What about credit unions.

Worse than getting mail from your bank is a phone call. They are always pushing for more business. Dreadful.

And when you do want something in printed form, it is no longer available. I’m thinking of the terms & conditions for ANZ cards travel insurance, which used to be available as a slim booklet easy to carry overseas. I called in at several branches which could not find a copy for me. Eventually found someone who said, “Yes, I can get that for you,” and disappeared for a long while, eventually returning with a fat sheaf of single-sided photocopies, amounting to close to a hundred pages. Did she really think I was going to cart all that around with me overseas?

The lazy tax is definitely one of Michael Pascoe’s pet subjects. I have a reminder in my calendar once a year to call my bank and threaten to leave. I have a bit of a look around at what’s available so I can plausibly argue what rate they should be able to give me. Just last week I made my annual call and knocked another 0.23% off, despite getting 0.41% off last year and several smaller discounts before then.

At least at NAB the mortgage retention salespeople seem well trained to keep your business. They are always pretty slick – getting you chatting and building rapport, then keeping you waiting on hold while they “see how low they can go”, then all of the reasons why they can’t match the other bank’s rate and why it’ll actually be a similar cost with all of the fees included. I try to ignore their mind tricks – it’s obviously about trying to lower the rate just enough to keep you – and I don’t accept their first offer since it will always be worse than they can accept.

If your mortgage rate doesn’t start with a 3 you can probably get a better deal even without moving banks.