I’ve been listening to a lot of transport-related podcasts recently. Almost all of them are from outside Australia. (Here is a list of some from November 2015; I mean to post another list at some stage soon.)

Every time I listen to one of the overseas podcasts, I ponder what someone from Melbourne would say if asked to introduce Melbourne’s public transport in 2 minutes.

Melbourne was founded when white settlers arrived in the 1830s, making it a similar age to many of Australia’s biggest cities, but it really started to grow during the 1850s gold rush. The first railways were built around this time, with land and railway speculation leading development into the suburbs during the late-1800s. The suburban rail network as we know it was mostly completed by 1910.

There is also an extensive number of bus routes, particularly in suburbs developed since the 1930s, though buses are often overlooked due to the high profile of the trams and trains, and service quality varies widely.

Today, greater Melbourne has a population of roughly 4.5 million people. The public transport network was in decline between the 1950s and 1990s as cars took over, development spread away from the tram and railway lines, and government investment focused on motorways. As in other western cities, this hasn’t gone well – at peak hour much of the road network is predictably congested, no matter how much they expand it. 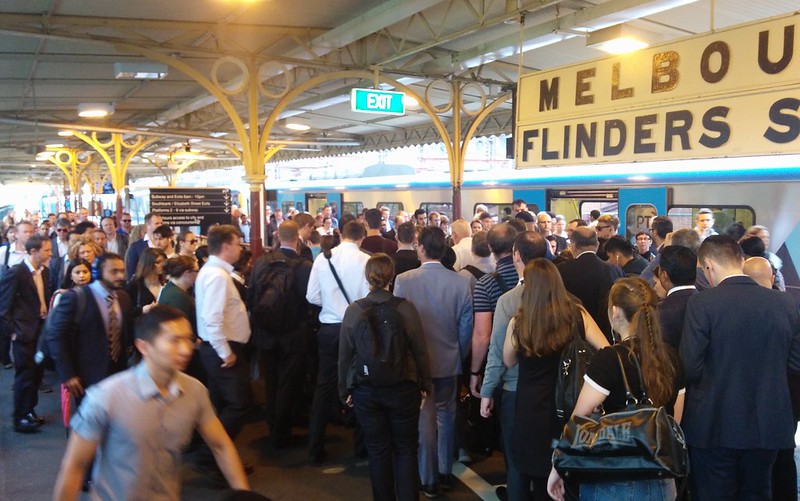 With recent strong population growth and in particular employment growth in the Central Business District, public transport patronage has gone through the roof, leading to overcrowding on some services, and a push for investment in new infrastructure and services. Growth in car use has tapered off, as population density increases in the inner suburbs, though cars continue to dominate in the middle and outer suburbs.

Today, the train network is slowly transitioning from a suburban commuter network into a metro, and the state regional rail network (at least the sections within 90 minutes of Melbourne) is morphing into a commuter railway. The tram network is modernising with longer larger accessible low-floor trams and platform stops, and is transitioning to light rail. Some bus upgrades are coming through too, but with all three modes there are growing pains, and a long way to go.

What did I miss?

Lack of train to airport?

It’s not hard to argue that Melbourne is lacking a number of rail lines (and other upgrades). I’m sure Airport Rail in particular would come up in any discussion, but really just wanted to describe the broader context in such a short intro.

Good overview, potential but not required inclusions (because I can’t see what could be cut to make space!)

-Integrated public transport fare system across all modes (you can argue about implementation, but it mostly works in my experience)
– Road use pricing still uncommon (just 2 major roads)
– you could mention the local/state/federal context in both historical and current terms (eg compared to Brisbane, Zurich or London). But this one definitely not needed in 2 mins!

An interesting aspect (and scandalous, in my opinion) is that most of the bus routes were established as jitney services in an ad-hoc fashion by companies trying to steal business from the tram operators. As a result, they followed existing tram routes (or train lines) and were not only completely uncoordinated with trains, but deliberately so. Routes sprang up wherever operators thought they could make a buck, often taking circuitous paths through suburbs, and those same silly routes largely persist in 2016. Also still with us are the largely privately operated bus companies which seem to operate with the same purpose as their forebears, i.e. to run in isolation and hopefully make money.

What you missed is that you should obviously be doing a podcast, Daniel. Even if only monthly, a recap on PT news, and an analysis of Melbourne’s woes would be very interesting.

After having just been reacquainted with Sydney’s system for a few days, agree with Dave about the integrated fare system (although Sydney is sort of working on that) and would add the daily cap (how much do you think it would cost for two adults and two children to make a return trip by train and ferry from Wolli Creek to Luna Park?).

I was in the industry and I have fairly extensive knowledge of its history.

I actually thought that was a very good effort!

I will re-read it tomorrow and see if I can suggest any improvements; but on first read – EXCELLENT!

Seconding Darren’s comment, you should do a podcast, Daniel! Interview politicians, decision makers, academics, people who use public transport etc. Try and see where it takes you.

I’d like to work with you on a podcast!

Perhaps you could comment that before that 1830, public transport consisted of walking and there was little congestion.

Perhaps I’d just add something like “Most of the tram network is street-based, leading to challenges due to car traffic” .. though it does benefit from the ‘Hoddle Grid’ with its wide parallel streets in the city centre.

If we had the traditional English street pattern of all roads converging on a central point then trams would have a much harder time.

What did you miss ?

Probably, information about myki and a warning that it is compulsory, may be hard for tourists to get, and has no practical way of getting excess funds back.

What’s the justification for claiming that the “state regional rail network (at least the sections within 90 minutes of Melbourne) is morphing into a commuter railway.”??

Geelong line sure, where else? And the Geelong line is more like 60-70mins from Melbourne not 90. Might be nit-picking but 20 mins on a radial network is a lot of landmass.

Thanks for all the comments. Remember, I wanted to keep it “big picture”. The fact that it’s so difficult to get a Myki Money refund isn’t what I had in mind.

Podcasts… yeah I’ve pondered trying that. Don’t have the time just at the moment to take it on.

By “commuter railway”, I mean an operation where the vast majority of the trips and resources (fleet, track capacity) are concentrated on commuter traffic – work/student trips into the City in the morning, out again in the evening. This is what V/Line has become in the past decade or two, for the lines out as far as Geelong, Ballarat, Bendigo, Seymour and Traralgon. You can easily see this from the huge number of carriages sitting idle around Southern Cross between the peaks.