On Tuesday the Level Crossing Removal Authority put out a whole raft of information on options for removal of crossings on the southern end of the Frankston line. If you have any interest at all, particularly if you’re a local, they’re definitely worth a look.

“The controversial ‘Sky Rail’ monstrosity on the Pakenham line has been dumped by Daniel Andrews for a ‘Roller Coaster Rail’ on the Frankston line.

“The Big Dipper belongs at Luna Park, not on the Frankston line.”

Three things on this:

1. The Big Dipper at Luna Park closed and was demolished in 1988. (The remaining original wooden roller coaster is the Scenic Railway.)

2. Unless there’s an extended section of elevated rail or trench, you do end up with rail lines going up and down like a roller coaster. It’s inevitable.

Extended sections of elevated rail between crossings are clearly not what the Opposition want, because that’s “sky rail”, which they’ve decided is evil (or at least, a chink in the Andrews Government’s political armour).

Extended sections of trench are impossibly complex and expensive and disruptive to build. The longer the trench, the more underground services have to be moved, and this takes a lot of time and money to do properly.

The three level crossings recently grade separated at Ormond-Mckinnon-Bentleigh are in relatively close proximity to each other, but between each, the rail line comes back up to ground level because it wasn’t practical to do it any other way. For instance between Ormond and Mckinnon there’s a massive storm water pipe (at Murray Road) just below ground level, so the rail line goes over it.

As shown in this video, and the top photo (snapped from Bentleigh, looking towards McKinnon), the ups and downs are very visible.

But — despite suspicions from myself and others that it would feel like a roller coaster, it really doesn’t when you’re on the train, thanks to only very slight grades (typically no more than 2%) and the natural topography of the area.

(Heading north out of Ormond is slightly steeper, and is more noticeable. This was done to preserve the Dorothy Avenue underpass, which is also part of the old Rosstown Railway line.)

This sort of thing happens all over the place without anybody noticing — except perhaps the train drivers.

Riding the trains, you might think it’s flat from Caulfield to Malvern… but it’s not: 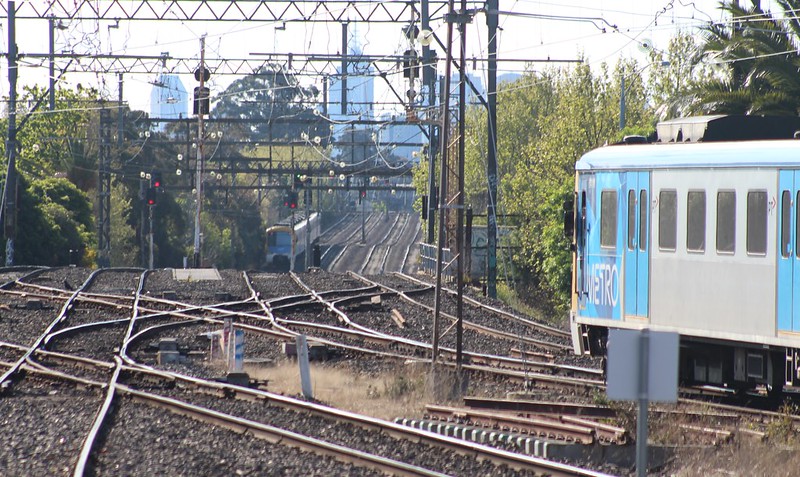 If this is “roller coaster rail”, then we’ve already got it, lots of it.

Finally, something to always keep in mind whenever a politician opens their mouth:

3. This is the Opposition doing what Oppositions do; criticising government no matter what.

In this case the options documents that have been published are a really good step to help locals understand the design decisions to be made, and the trade-offs of each method.

In fact, it’s not hard to argue that this sort of information should have been provided on all the crossings before designs were finalised.

Yep, I totally agree about what you said in respect to the opposition party comments.

I shall repeat what I am saying a few times of late, in that, most of the crossings between Edithdale and Carrum can be just closed off, keep the railway as it is, and grade separate only at each end.

I will also suggest buying up all of the land between the highway and the beach along that section, and turn it into a massive beach. People will then catch the train right to what can become a tourist icon.

I gather Glenhuntly Station and the Neerim Road crossing are not on the list for level crossing removal. That is almost unbelievable until you look at voting patterns. Nevertheless, the current government is doing a good job of separating cars and trains. But absurdly the Kororoit Creek Road train crossing will be separated from cars. One train every twenty minutes in each direction with trains not having to slow because of stations, and then there are the frequently cancelled trains that never disrupt car traffic.

Andrew, while I agree Kororoit Creek Road crossing is not congested, as far as I know project will also include partial duplication of the track which should help out with efficiency.

Having lived in Chelsea before, I have thought the idea of effectively making the railway a median strip between two lanes of northbound Nepean Highway traffic and two lanes of southbound Station St traffic might work for through traffic, but the impact on local traffic interacting with this would need careful study.

In terms of the political arguments, I say leave it to the engineers!

I was thinking the same thing when I saw the options info Daniel, so much more detail and useful information than what was provided for CD9 at the same stage of public release. For the ‘difficult’ crossings the LXRA is obviously learning what level of detail people expect as they go, I still believe the design decisions are fairly set regardless of community input but drivel from the Libs without any constructive criticism doesn’t improve the process either (just polarises people and makes those of us with honest concerns get lost in the muck). I feel for the Frankston line peeps because this process is hard for everyone and sometimes it can feel like there’s nobody in your corner without a political agenda.

I should sue David Davis for copyright infringement – I came up with the ‘roller coaster’ insult back in May, in regards to the St Albans grade separation works:

Does long term energy efficiency come into the equation? It did with city loop design. Using momentum loss by rising into a station and momentum gain by dropping down out of the station. Long term cost.

I read it as an election promise from David Davis to build more rollercoasters in Luna Park. Fantastic!

I understand that the opposition criticises the government in power however using these terms does not give David Davis credibility. David Davis constantly repeats the same things over and over again and to be honest I do not think the majority of the electorate will believe him.

Firstly he constantly states that there is no EES when clearly rail under would result in more trees being cut down than skyrail as well as the fact that they can’t be regrown as would be the case with Skyrail by the open space created.

He also states that there is no business case when rail under would result in significantly higher costs of excavation, disruption and utility relocation.

He will obviously appeal to some vocal locals resistant to change but will be outnumbered by people in the southeast who need level crossings removed, more open space, less disruption, less taxpayer funds used, lower noise (with proper sound barriers) and better overall amenity.

I really hope they don’t put all those stations underground at Aspendale/Edithvale/Chelsea/Bonbeach etc. It would cause massive disruption to groundwater flows and require a lot of stormwater pumping, while leaving the area effectively as divided as it already is, with the exception of road traffic which would see an improvement.