On Thursday night my phone, a Nexus 5 that I got about three years ago, finally started playing up. 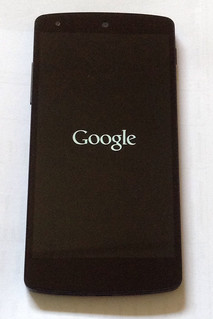 It would continually boot, with a buzz, and a proclamation on the screen of “Google”! Then repeat. Bzzt… Google! Over and over.

Scouring online, I discovered this is a reasonably rare, but not unique, situation. The power button was jammed down.

The next morning, before work, I went looking for solution. No problem, said people on the forums… there’s a quick and simple fix. And they pointed to a Youtube clip someone had uploaded showing how to do it.

Quick and simple. Get your jewellers screwdrivers (okay, I have a set), take off the cover, then remove the battery, unplug all these ribbon cables, then…

At the point where they said to take out the motherboard, I thought yeah, this isn’t going to be the kind of quick and simple fix done just before going to work.

Then I found another suggestion in the forums:

Give the phone a good whack against the side of a desk. A couple of hits and the power button may go back into place.

I tried it. Bang. Nope. BANG. BANG. There it is! Wow, it worked! All without pulling the phone apart.

Except… no. It couldn’t be that easy, right? It wasn’t. 36 hours later it was playing up again. Bzzzzttt… “Google”!

So I need to buy a new phone.

The Nexus 5 had been excellent. Three years is a long innings for a smartphone, and over that time it hadn’t slowed down markedly, and Google had kept feeding it updates, without them having to be filtered through the phone manufacturer and phone company first. (In fact, they’ve only just announced updates for this model will cease in a few months.)

So I wouldn’t hesitate to get another Nexus.

For now I’m getting by on a borrowed HTC Desire 510. It’s functional, but I’m reminded of how much bloatware HTC and the other manufacturers and the carriers put on Android phones.

The Nexus 5’s replacement, the Nexus 5X (RRP $579), has been getting good reviews, and might be a good option.

And apparently in the next few months a new set of Nexus phones are expected.

No, I wouldn’t go an iPhone (SE from $679 RRP; 6 from $929). I love Apple’s hardware, but I love that I can plug an Android phone into any computer and move files around — I couldn’t stand being locked into iTunes and Apple’s ecosystem.

The 5X is certainly a good (though somewhat slow) phone, but if you’re keen on a Nexus, you should wait a month or two until the new ones are out – then you can get a 6P (superior to the 5X) on the cheap, or buy the new lower-tier Nexus.

That is, if you can get by for a couple months on the HTC.

@Darren, yeah I’m pondering if I can hang on a couple of months with the HTC and see what the next Nexus is like.

I’m not sure I’d want something as big as the 6P.

I vaguely recall when you bought the phone. Five years is a long time in phone terms. In spite of updates to old phones, the new phones are just so much better. Clearly the staff at Samsung use Samsung phones and almost every issue I have had with my Samsung phones have been ironed out in the next model or with an update.

We do get attached to a brand of phone so it is pointless to suggest you should buy a Samsung 7.

I miss the days of phones the size of the Galaxy S2 or the Nexus 4. Still holding on to the former.

After 3 years, my Galaxy S4’s SIM card slot has now started malfunctioning and would often fail to read my SIM. I decided to have it fixed and keep it around for a bit longer, so it’s currently with Samsung being repaired. This cost me around $140 and they’re also fixing other issues with the phone, like how it won’t connect to displays using MHL.

Meanwhile I’ve brought my Motorola Razr V6 out of retirement and installed some modern java apps to make it useful for 2016 (at least until I get my S4 back in the next few days).

As for my next phone – I think I might get the next Samsung phone or iPhone (although I’m also looking at the HTC 10). I decided against the Nexus 5X though because it has 32GB and no SD slot.

Same thing happened to my Nexus 5, except when I banged the button against a table it got completely stuck in.. Had it fixed at a phone repair shop for $60 though. It only took an hour and it works as good new. Much better and cheaper option than buying a new phone.

I’m currently using a Samsung S7. After using an S3, S4, and S5, I swore I’d never get another Samsung (the S3 was good but the 4 and 5 rubbish). But with no other good options, and having been impressed trying an S7, I bought one. And I have to say, it’d have to be the best phone I’ve ever had. Not since my Nokia 5500 have I been so happy with a phone (for its class and era). Pleasantly surprised, would recommend.

Did you backup your data from your Nexus phone?

All Google products are cloud-based, but ironically I think Google phones cannot be backed up to the cloud? Or even to a laptop?

If you want cheap and good, I would recommend importing a Xiaomi Mi5 (or MiMax if you like big phones). Both are around $400 or less, with top notch specs!