I was lucky enough to get to look around Bombardier’s Dandenong factory a few weeks ago.

As these publicity photos off their web site make clear, the company builds trains for (clockwise from top-left) Victoria (V/Line), Brisbane (Queensland Rail), Adelaide (Adelaide Metro), and Perth (Transperth) — EDIT: though these are not all built at Dandenong. 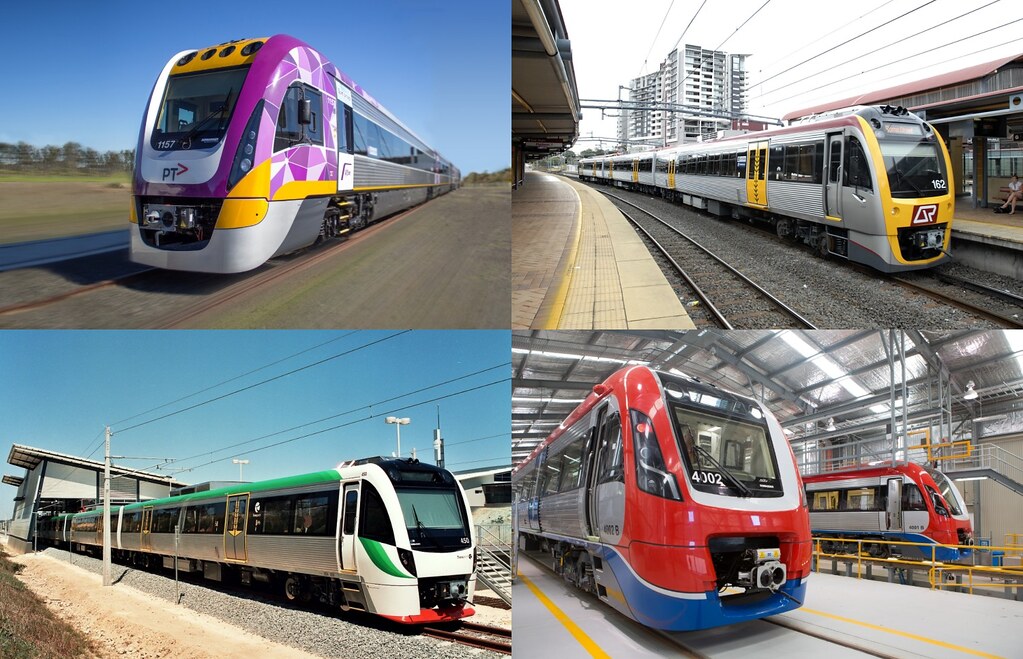 They also build the E-class trams for Melbourne, though only the V/Line and tram jobs are running at the moment.

When I was first looking around, a V/Line V/Locity carriage rolling along sideways on a traverser, which can move carriages between tracks. They use it to move them between the various areas of the factory. 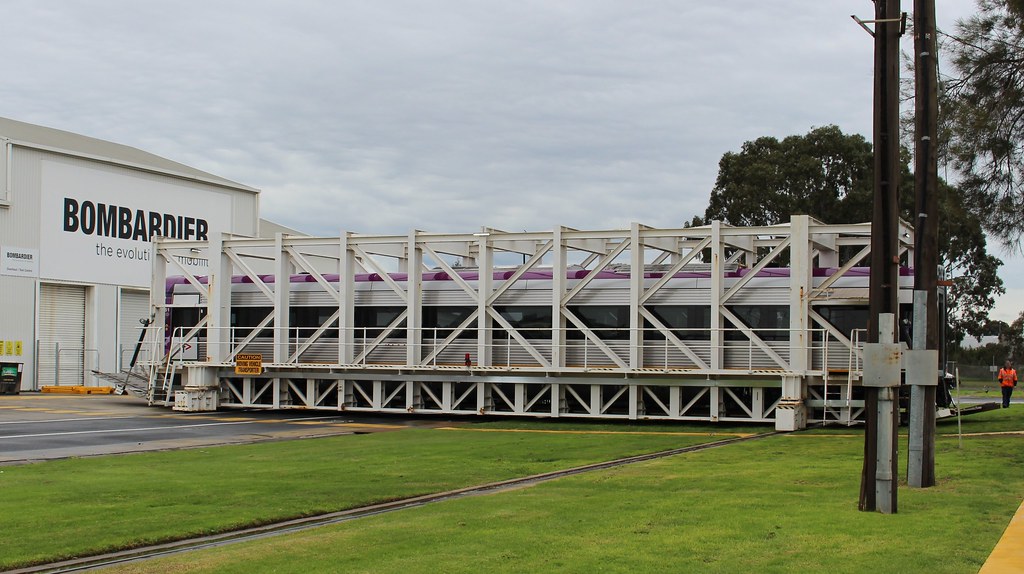 These photos aren’t actually in order, but here we go… 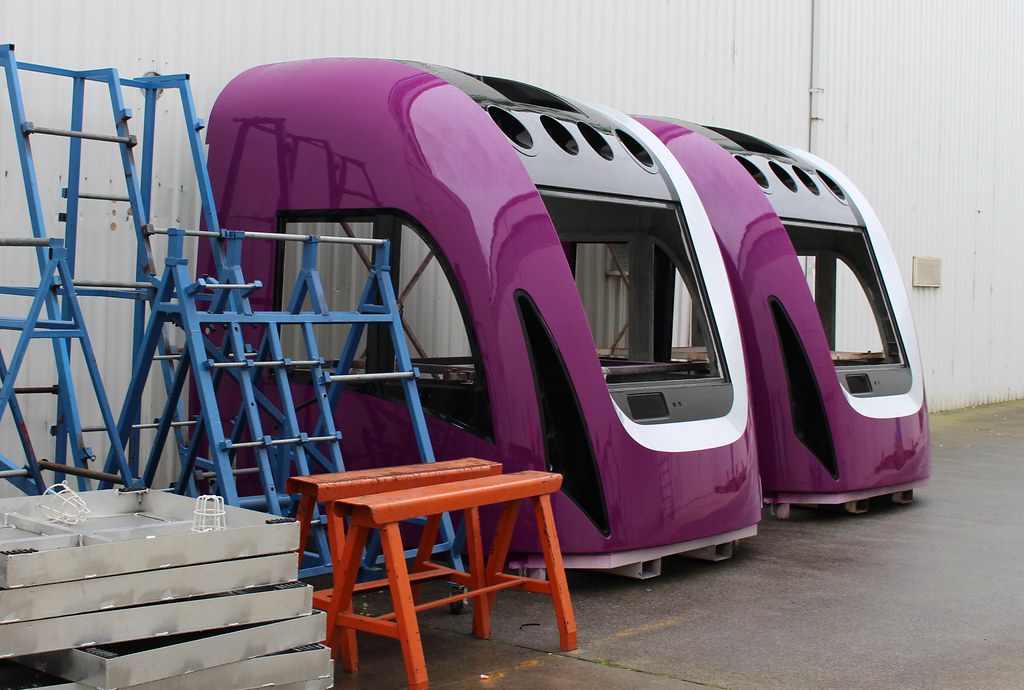 V/Locity carriage side. Almost all the components of the carriages (and trams) are made here, or provided by local suppliers. This is quite unlike the X’trapolis trains, which are largely imported and then fitted out and maintained locally. 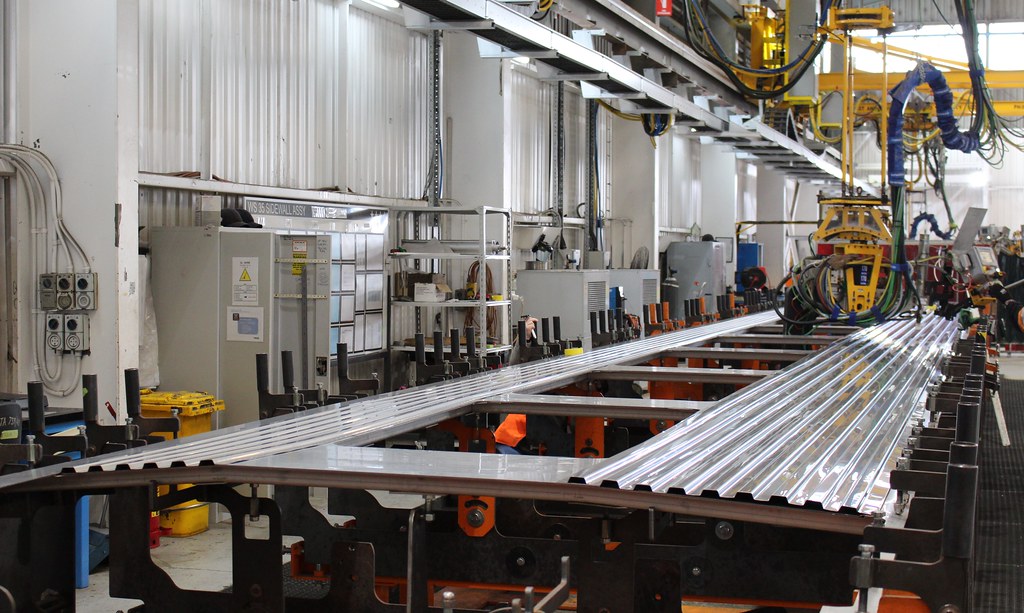 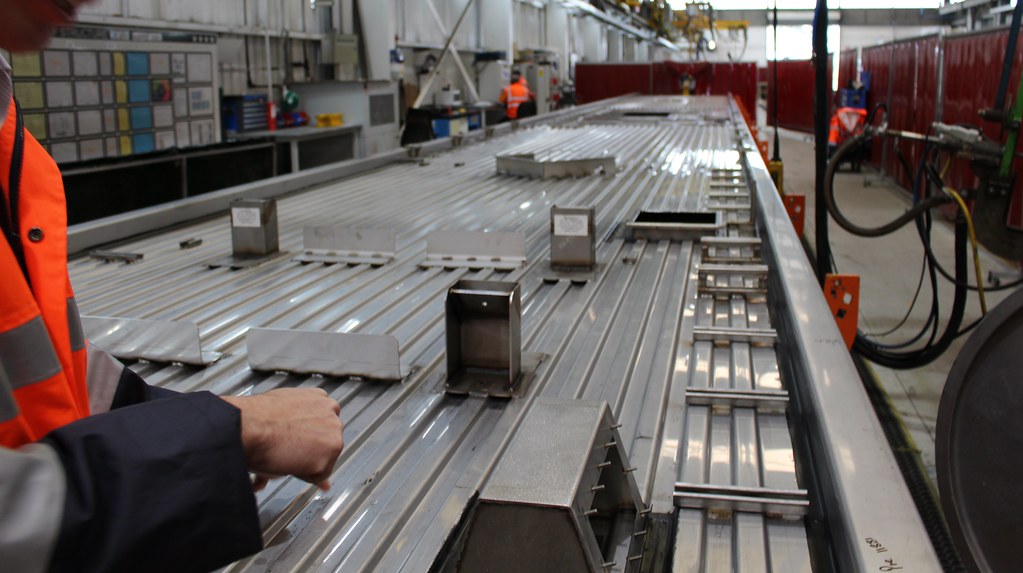 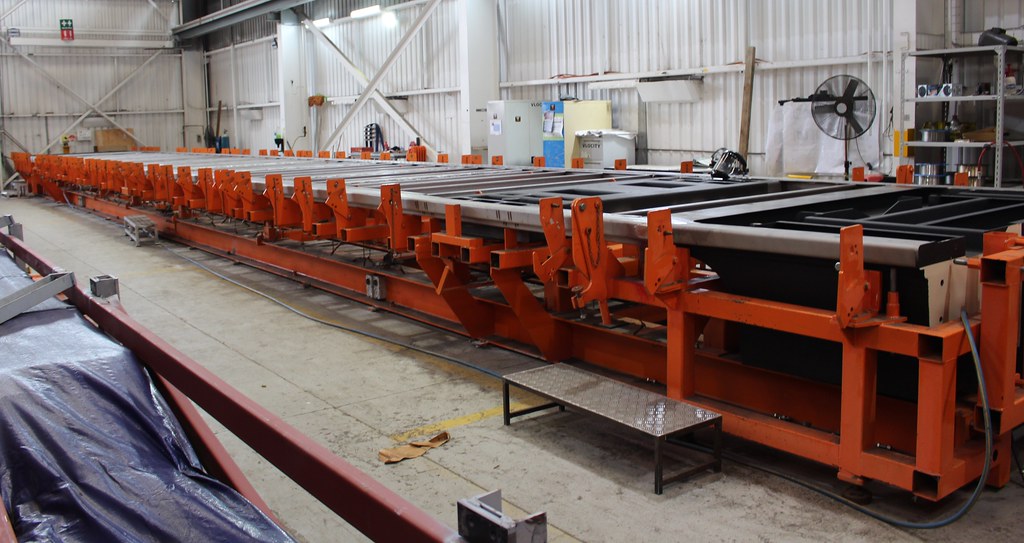 The bits being stuck together 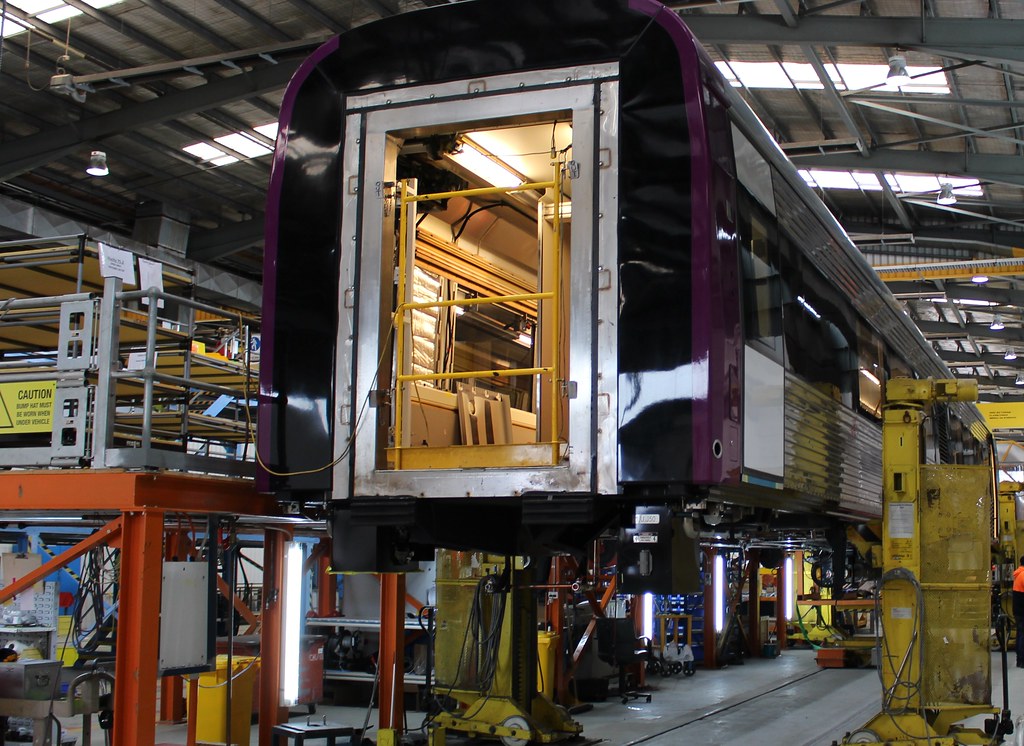 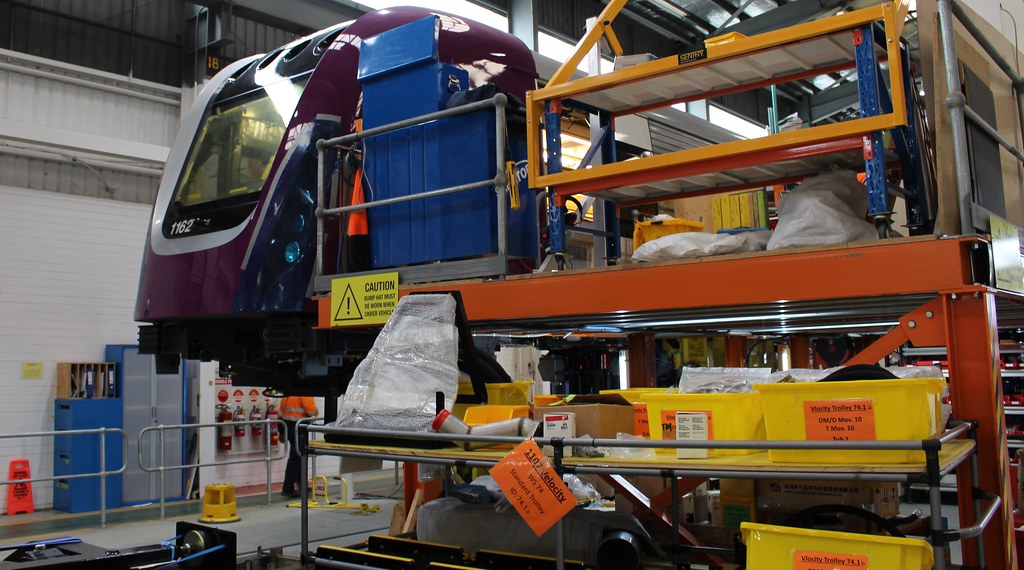 Once finished, the new carriage goes out on the traverser (see above) and gets tested.

In another area of the factory, V/Locity carriages come back to base for regular servicing. 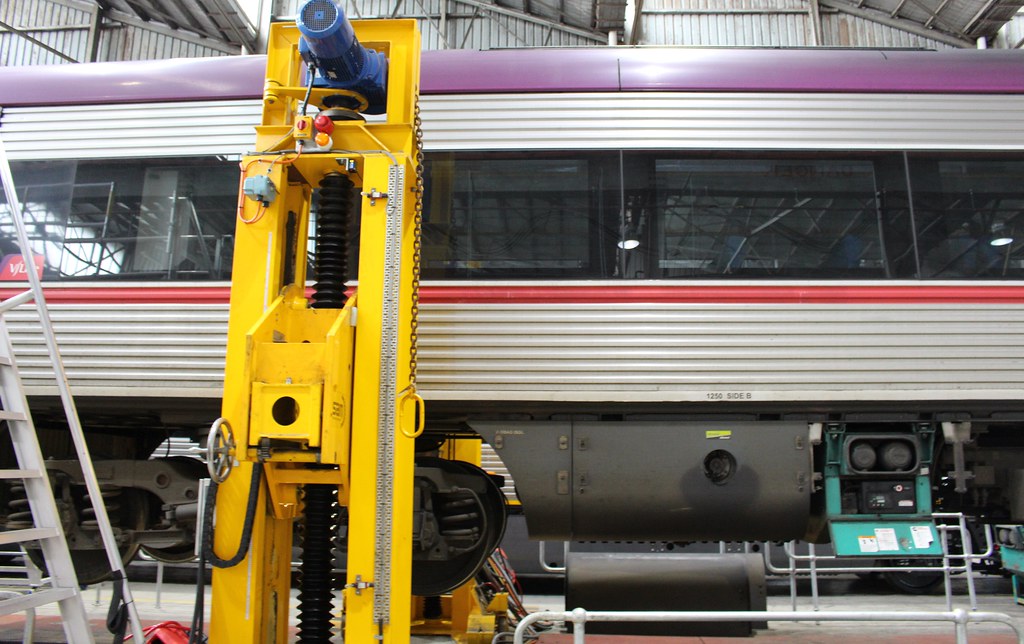 Other maintenance is done at Bombardier’s Ballarat facility. My PTUA colleague Ben got a tour of it, and posted some pictures too:

So last night I did a tour of Bombardier’s Ballarat East train maintenance facility, which was pretty cool pic.twitter.com/R9FpioImdN

So far they’ve built 40 of the 70 E-class trams on order. The government has options for more. 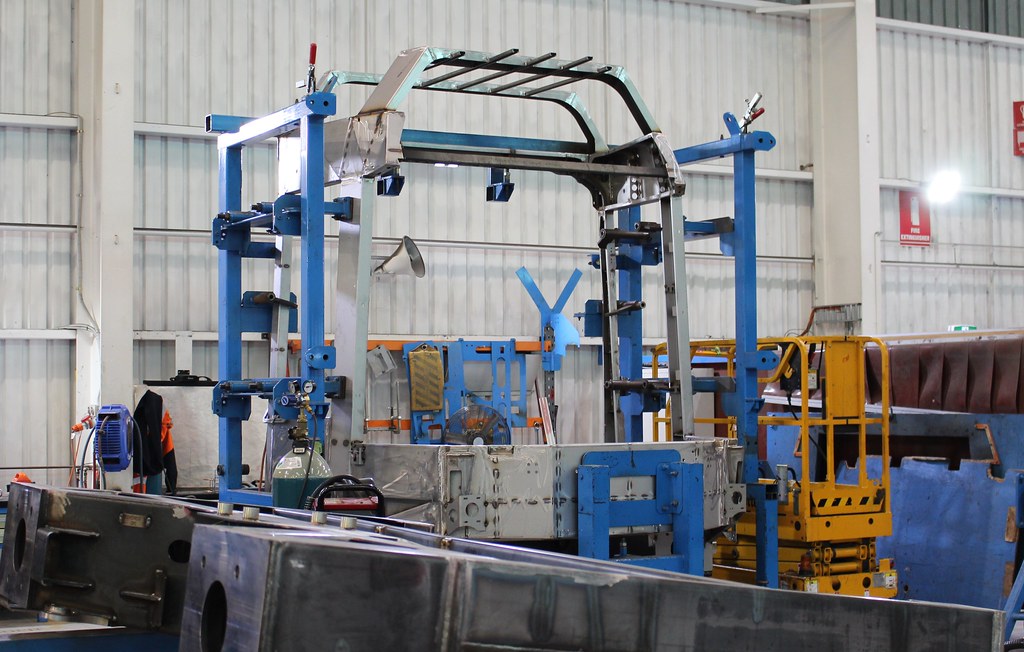 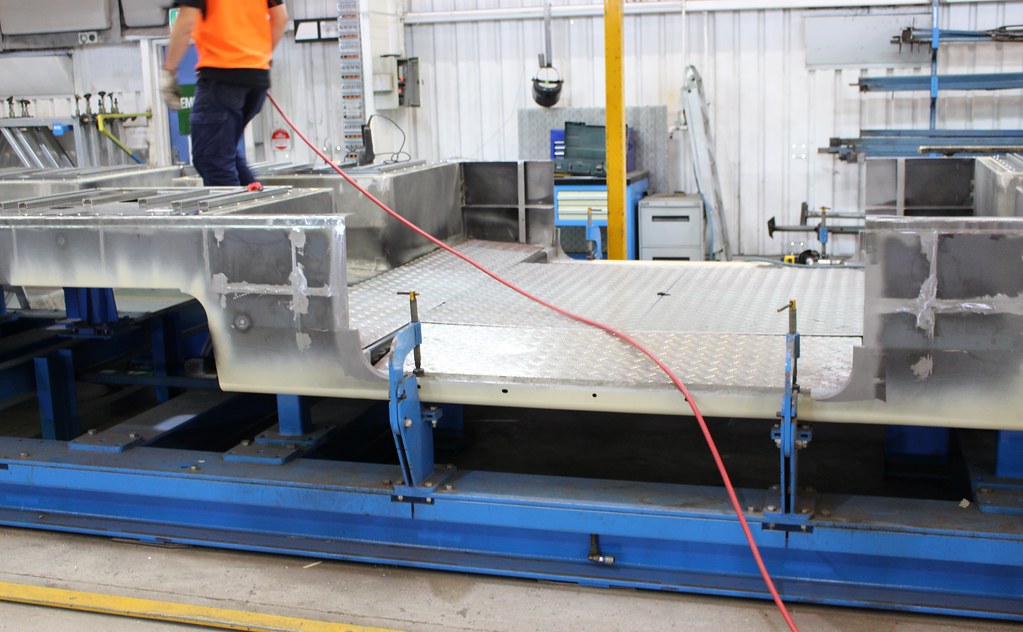 The doorway ramp has been a bit controversial. Many tram users have commented on its problems. This is because the trucks (wheel bogies) underneath the tram body are especially built up to withstand the sometimes varying quality of Melbourne’s trackwork. Apparently they were based on an East German design!

Thus you should generally get a smoother ride on an E than a C or D, both of which were designed for smoother more modern tram networks typically seen in Western Europe. 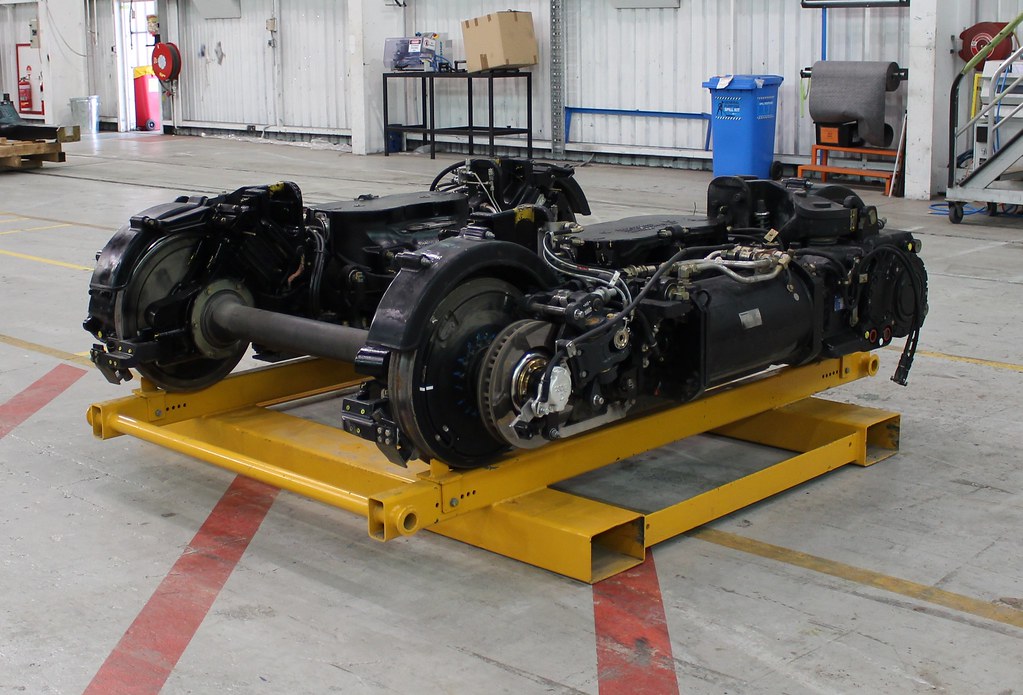 Building up the tram… 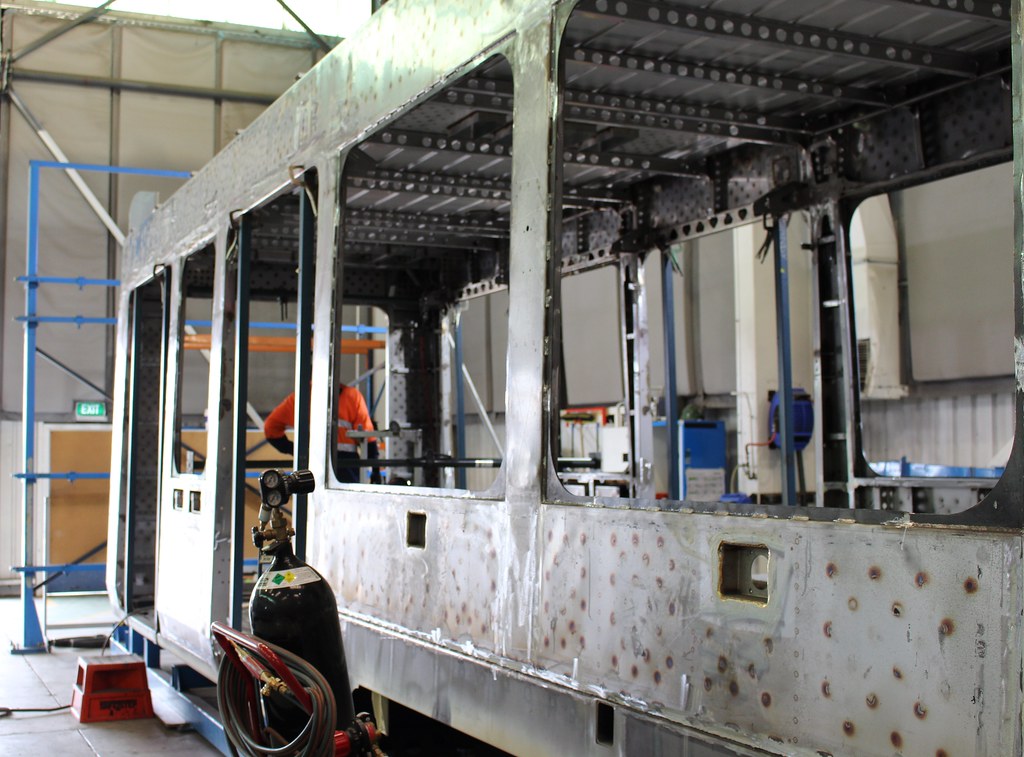 E-class door mechanism. Amazing the amount of wiring that goes into these trams. 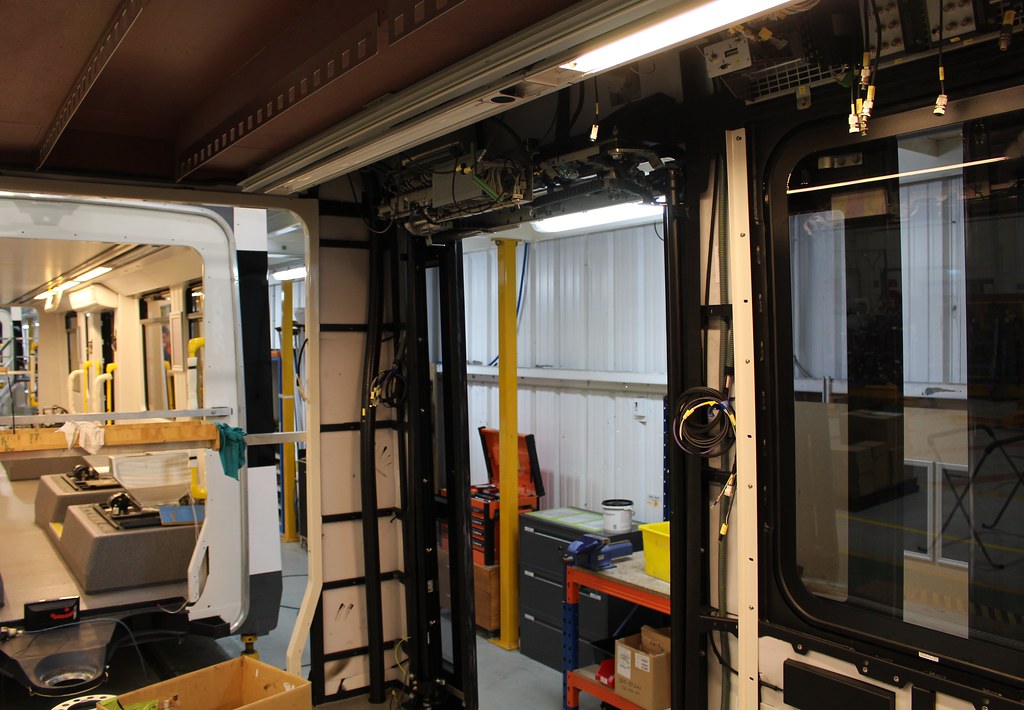 Where the sections of tram join together. 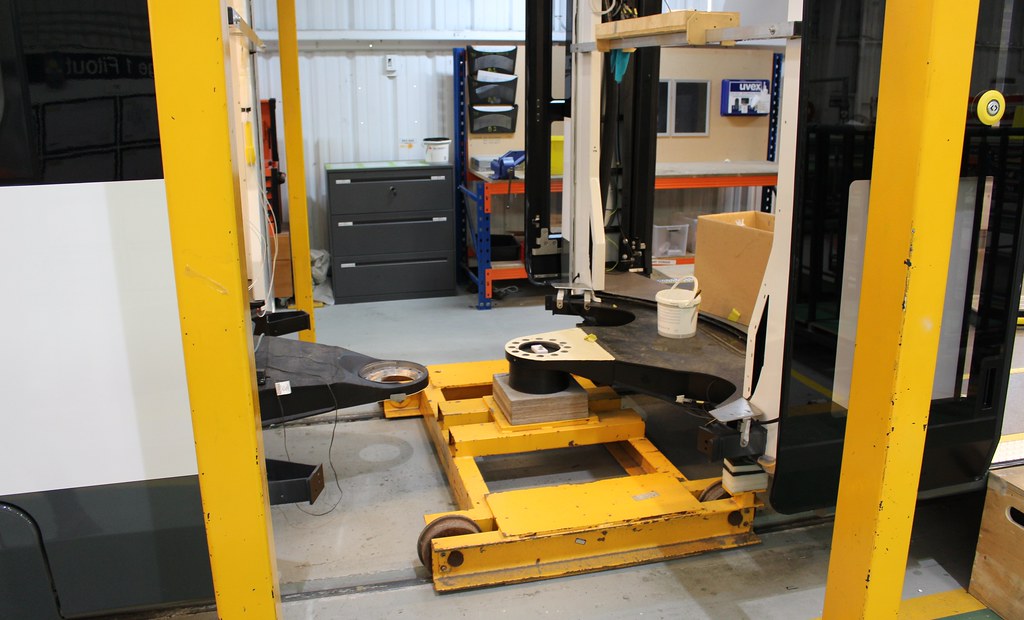 Stick the cab windscreen on the front, and it’s almost built. It just needs a bumper bar… 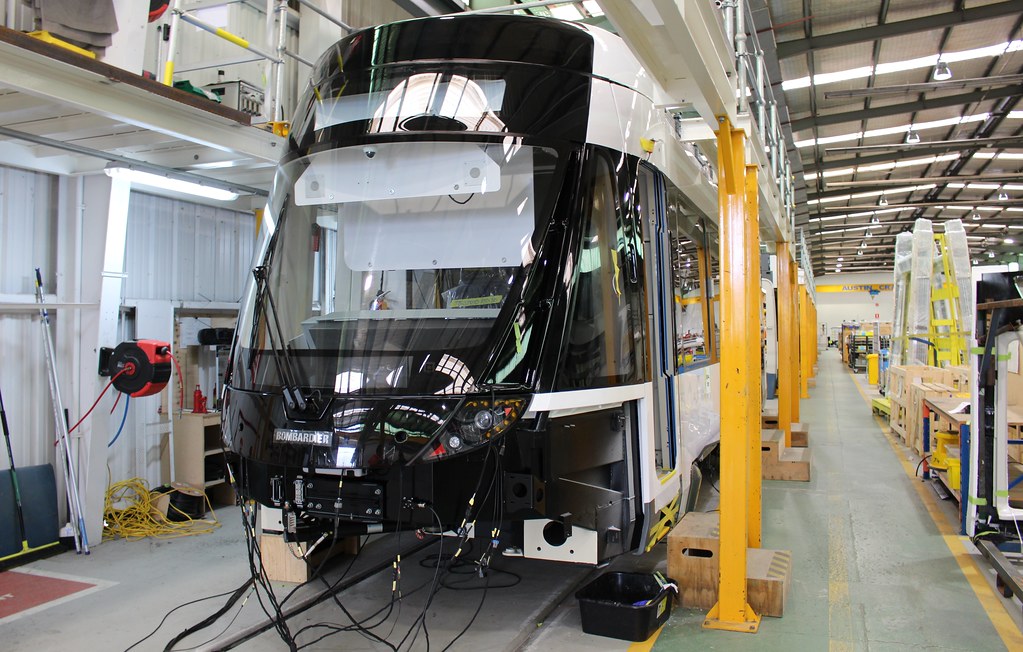 Ah, here’s one we prepared earlier: 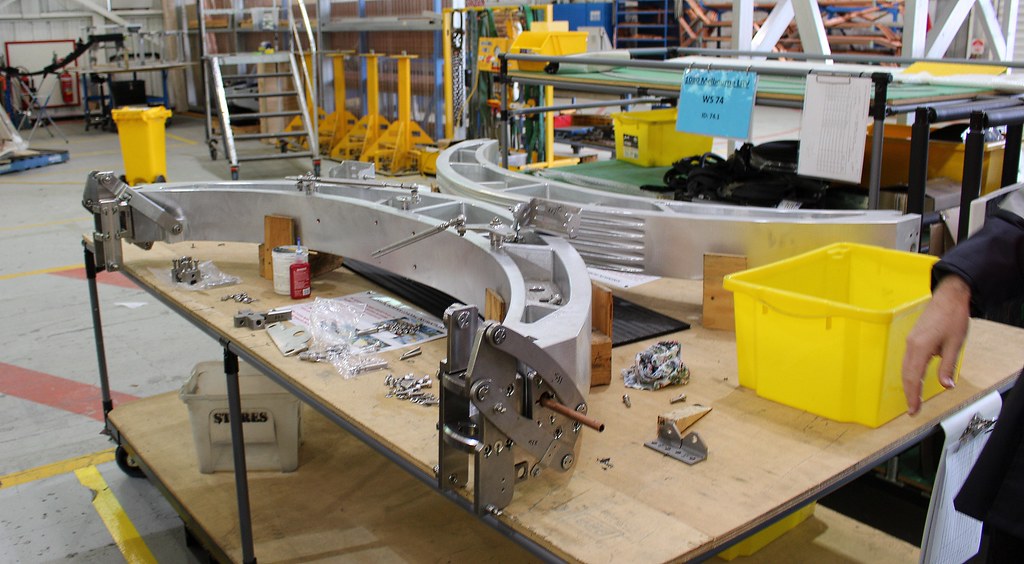 Outside there are some E-class prototype sections. I forgot to ask what the one further from the camera is. Anybody recognise it? 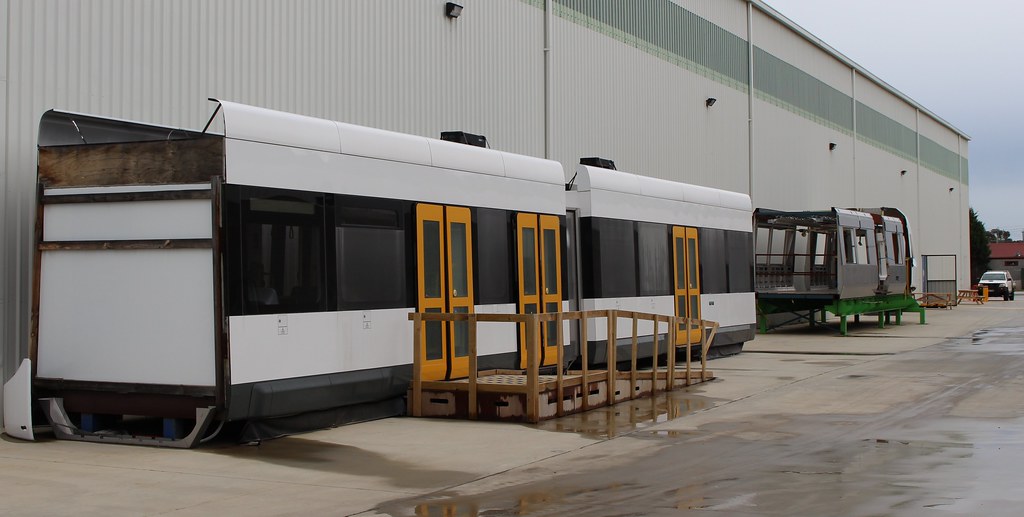 For the history buffs, there are a few plaques around the site. An earlier incarnation of the factory was Comeng (Commonwealth Engineering), which of course made the Comeng trains, as well as many of Melbourne’s trams. 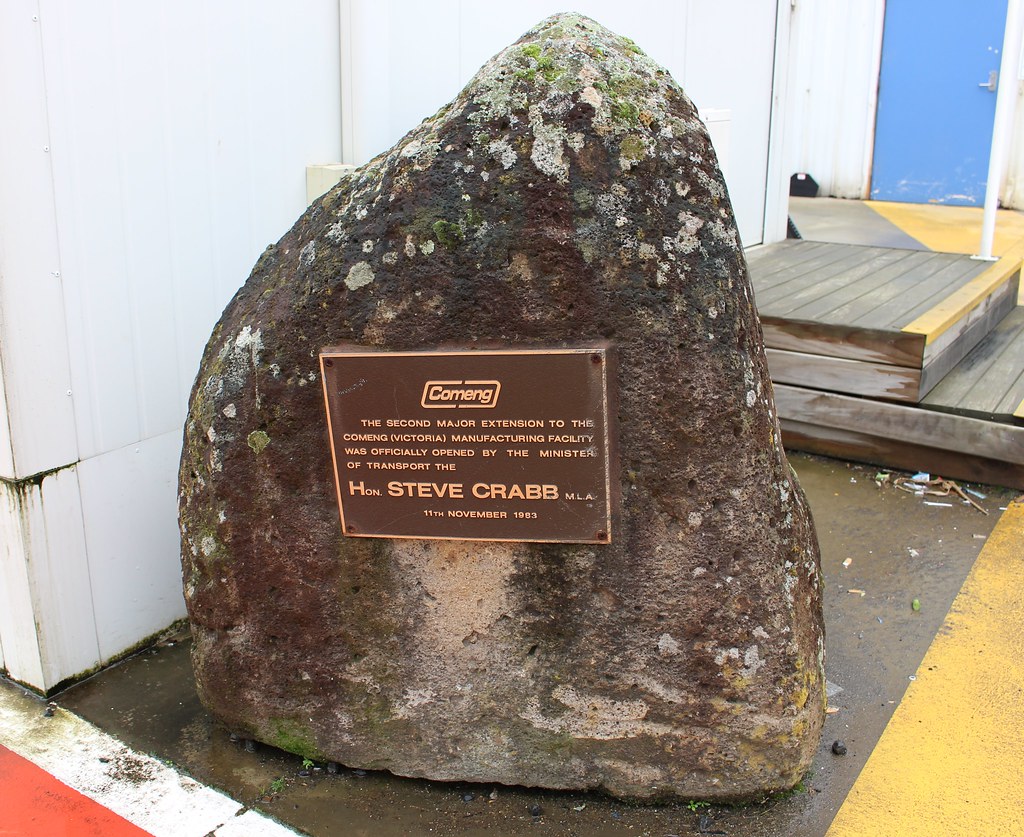 The first V/Locity carriages were built back in 2004, as part of a fairly small order, which meant the refinements and innovation that could have gone into the design didn’t really happen at the time. This did happen with the E-class trams — that’s why they took a while for the first to be delivered.

Where possible they also do incremental improvements to the design as they go. Tweaks for the E-class trams are already being made.

But at some point, especially for the V/Locities, a whole new design is going to be needed — one that doesn’t date back 12+ years.

If there was one message I got from the guys at Bombardier, it’s that larger orders help ensure that time and resources go into improving the designs, as well as secure the local workforce. It was no surprise to learn that they’re bidding for the new High-Capacity Metro Trains tender, and were shortlisted.

The government’s rolling stock strategy is a good move in this direction, but obviously it helps if the actual funding for orders comes through as well – it’s looking like the HCMT order will do this.

With the demise of the local car industry (and local manufacturing generally), it makes sense for the government to ensure the local rolling stock industry has a strong future. So far, things are looking pretty positive, but it’ll be interesting to see where it goes from here.

Many thanks to Bombardier for the tour.

9 replies on “A look around Bombardier’s Dandenong train factory”

“based on an East German design”.
That makes me think of the infamous Trabant car.
Hopefully, the E-class tram will be more efficient.
Great photos, thanks.

The promo shot of the QR IMU 160 and Transperth B series are a bit misleading…They were built up in Maryborough Qld.

They must be churning out some more Perth ones, too.

Driving past Leighton yard on Thursday they were lifting some onto the tracks from what appeared to be a truck delivery (wonder if they come all the way by truck, or boat/truck?)

That’s a photo of a an E class bogie, not a VLocity.

What are the problems with the door ramp? And what modifications have occurred during production?

I find it interesting that the VLocitys’ delivery run just involves driving it out the door via connection to Cranbourne line. The Es and A-Citys are trucked out.

I would love the idea of having Bombardier linked to the tram network, so the trams do not need to be trucked out.

I know of many groups who would like a guided tour around Bombardier. Could you please P.M. me with contact details of who I would need to approach to arrange such an event?

@Bramley, oops! Thanks. Damn, I knew I’d get the photos muddled.

@TranzitJim, sorry, as far as I know they are not offering public tours. Given the requirement for steel-cap boots in most of the workshops, I suspect it’s not practical to do so.

@Ken – the Transperth B sets are transferred from the Maryborough, QLD plant by rail.

IIRC the unit at Leighton Yard is being sent back to Queensland for heavy frame repairs.

[…] Engineering”) factory where they were made between 1981 and 1988. The factory in Dandenong is now run by Bombardier, and in the grounds you can find a plaque from 1983 with the same logo you’ll still see on […]

very nice piece thanks very much started to think we don’t make anything in Vic anymore but I now know we make trains and trams.