After the big 37 day Frankston line shut down, the trains are back, and the new shiny Mckinnon station has re-opened.

The other two stations, Bentleigh and Ormond, will open late in August.

Here are some pics from Mckinnon from the past month…

28/6/2016 – the station had been closed since 25th March, a couple of months before the line closed on 24th June. Four days later all traces of trains had been removed and the cutting was being dug out. 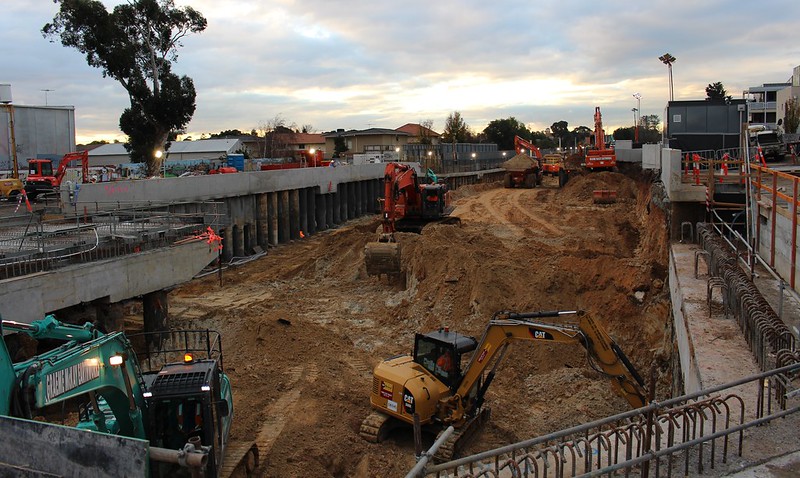 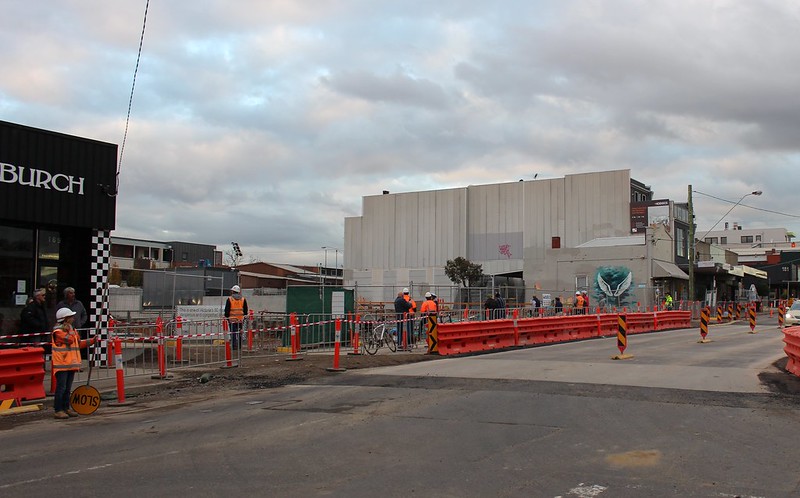 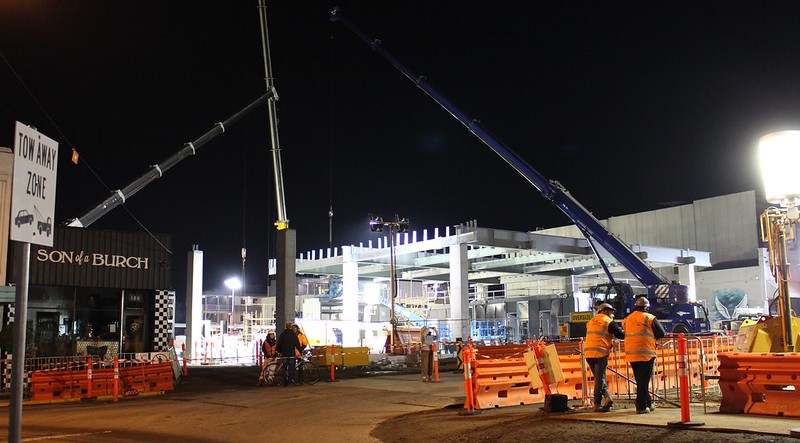 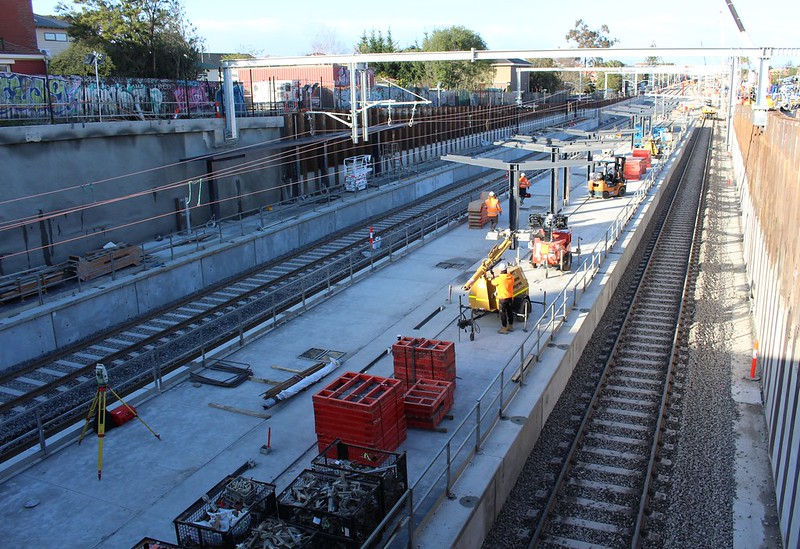 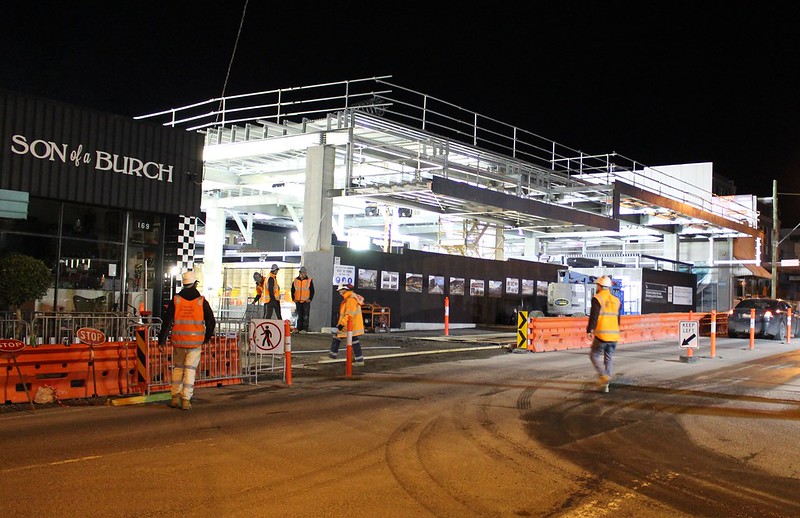 The Myki equipment was in, and the departure screen was on, showing “ghost” train times. Notably, the clock was 10 minutes fast. 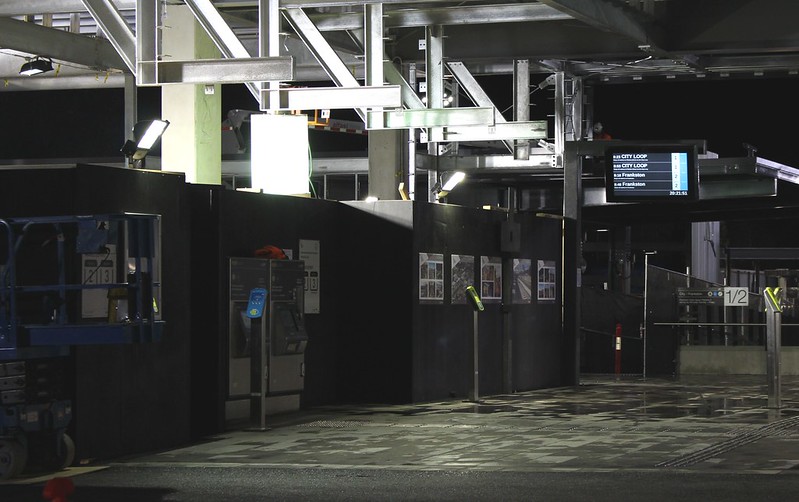 1/8/2016 – opening day! Due to circumstances entirely unrelated to public transport (no, really — I’d rather have still been asleep — why does nobody believe me?), I managed to turn up at 6:20am. For an unstaffed station, it was looking pretty staffed. 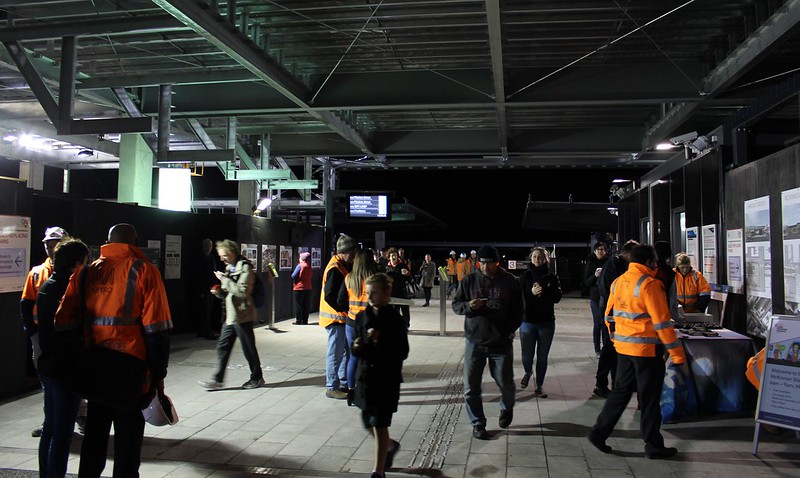 The screen clock was still 10 minutes fast, and apparently there was no quick fix, so they put black tape over it. (It was fixed by 10am when I visited later.) 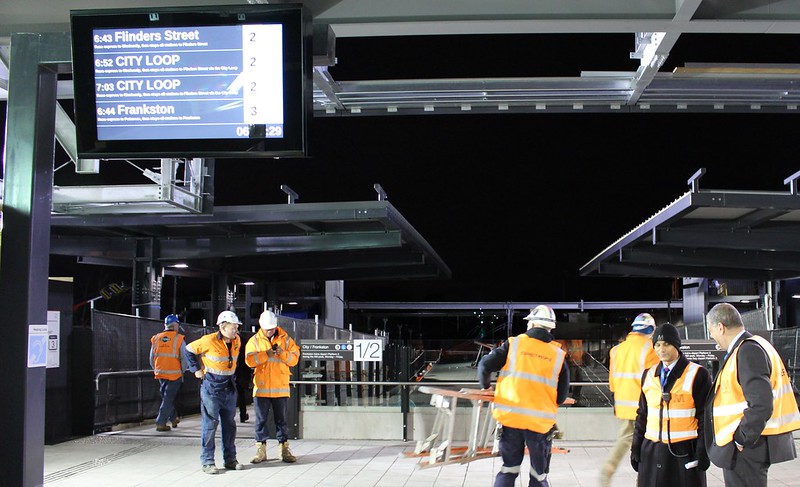 The lifts and stairs aren’t finished yet; just the ramps provide access to the platforms. Completion is obviously a few weeks off, but there’s enough to make it usable. 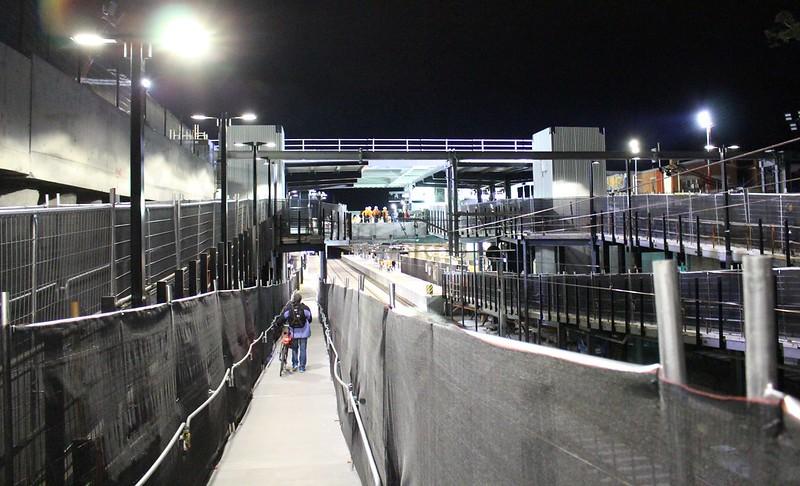 Platform 2 is the citybound platform for now. Note the “Safety zone” floor signage is overlaid with tactiles, making it not very readable. 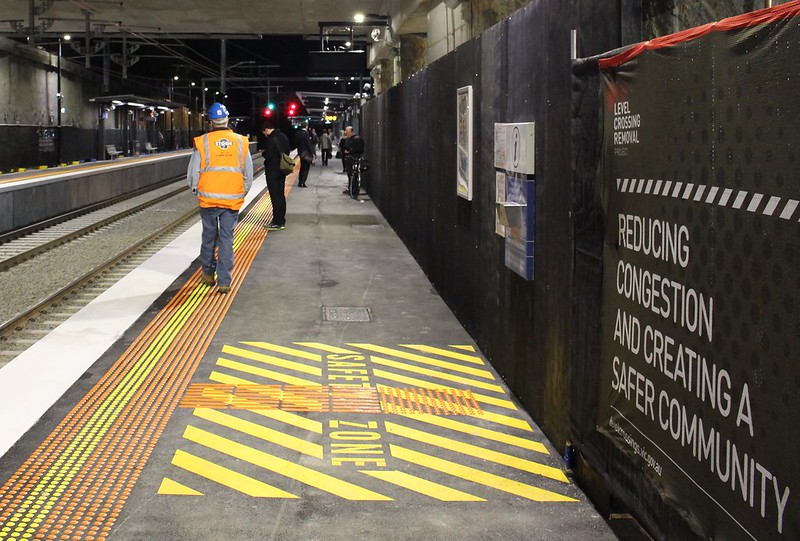 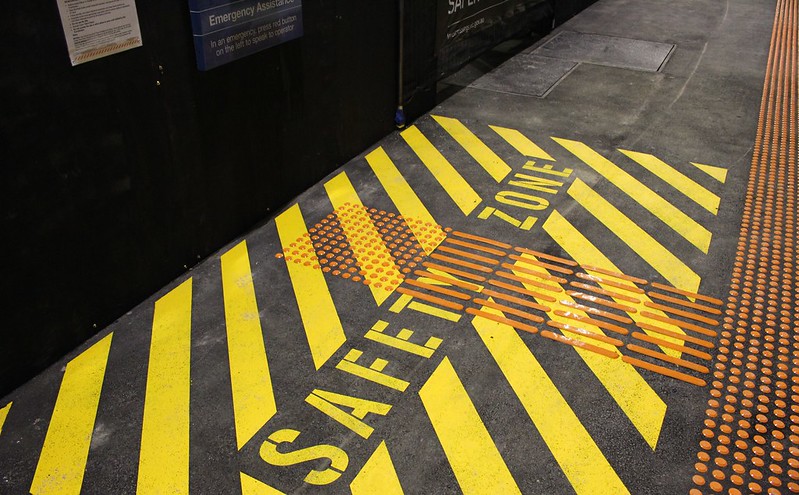 Platforms 1+2 will normally get most usage. They also have more rain protection than platform 3, but there are some significant gaps. (The ramps also have no cover, but are unlikely to be used much once the stairs and lifts are opened.) 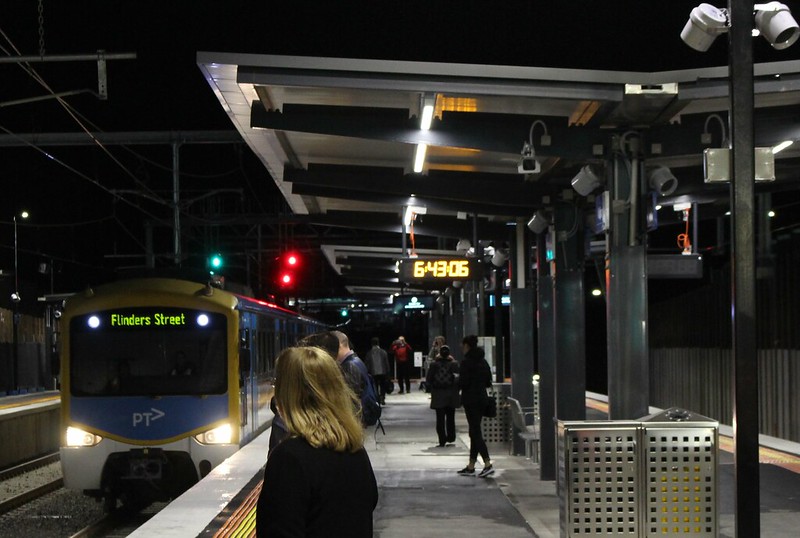 Later in the morning. Still obviously some work on the building. 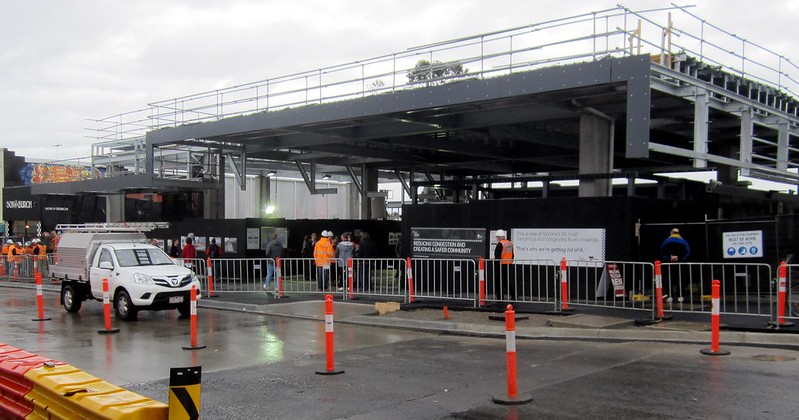 I didn’t plan it that way, but when I was passing, so were Public Transport Minister Jacinta Allan and Member for Bentleigh Nick Staikos. (Source: Victorian government) 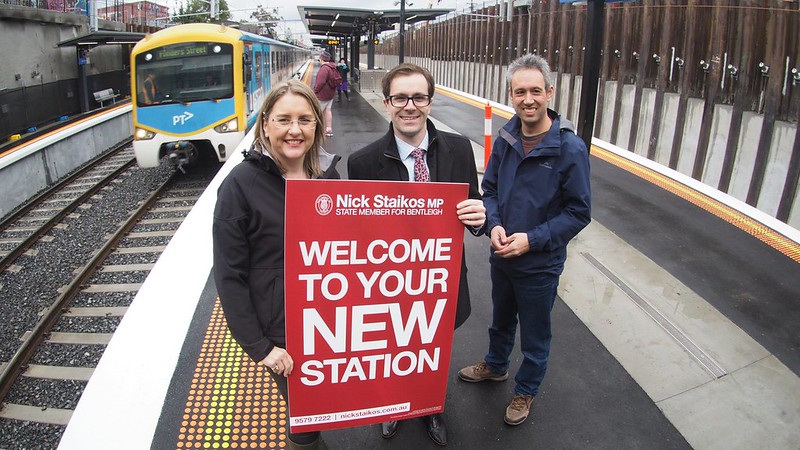 It’s an amazing achievement to get the rail line back open in 37 days, though a lot of preparatory work was done in advance, such as moving underground services.

Metro notes the works still to be completed:

McKinnon Station will be open and ready for customers to use with myki machines and readers, tactiles, and platforms with accessible ramps in place from Monday 1 August. Over the coming months, we will complete works on the concourse and platforms, including the installation of lifts, stairs, CCTV, passenger information displays and speakers. Other works include rebuilding the customer car park, taxi rank, bus stop, Kiss ‘N’ Ride and bicycle facilities, the public toilet, and landscaping works. Thank you for your continued patience during this time.

I’m sure locals will be pleased the station is open. In a few weeks Bentleigh and Ormond will also open; in the mean time trains won’t stop there and the buses are still in operation. (I had today off, but on work days I’ll probably walk to Patterson or Mckinnon).

Only two tracks are in operation; the third will re-open in September, and express trains will resume.

13 replies on “Mckinnon station is open”

Those new PIDs are much more useful than the old ones, especially for casual PT users who mightn’t know what the stopping pattern will be.

The concourse could definitely use more Myki readers (and how come they didn’t put in those new ones where you touch on the screen?)

No doubt you would have noted how long a tram line can be shut down in Europe while the tracks are replaced. Ok, Australia now replaces train and tram tracks in a very expensive manner, but it seems we do it extremely fast and efficiently. It’s a great effort by the on the ground workers, but my real admiration goes to those who organise and coordinate.

I am yet to have my look and ride, but am sure to do so soon.

On the PIDS issue, I love the fact that they are now having the screens on the platforms of which show the list of stations it is stopping at. However, I feel the TV screens as not being the best medium. I prefer the old orange LED, as you can read it from a distance. The TV screens you need to be right up at it. I wish they could have a combination of the two.

Very well executed project. However in regards to so much digging and disruption couldn’t there have been an opportunity to dig more to make it cut and cover and built more apartments and some linear parkland etc. I am not saying it’s feasible but couldn’t a Cost vs Benefits analysis have been done vs the current scenario of one big trench with little opportunity to recoup costs.

@Steve, I gather those new PIDs are now the standard design, so all the rebuilt stations should get them. I agree, a great step forward.

Very few of the standalone new Myki readers have been deployed at stations; Flinders Street (Elizabeth Street exit overflow) is the only location I’m aware of. Perhaps they’re still testing them.

@Andrew, it was awe-inspiring to watch it all happen. There must be a lot of co-ordination to make sure up to 1000 workers at a time are all doing their various roles at the right time and place.

@LLib, we know they’ve built a deck at Ormond for development. The new Mckinnon Station building does include space for retail development on the street-facing side.

@Daniel
Those areas of development are closer to the stations. My suggestion was to deck over larger sections of the corridor (possibly in stages) for more housing near the stations and linear parks, bike/walking tracks further away from the stations.

There are so few examples that I don’t think the economics quite stack up in most cases.

This is something the NoSkyRail people seem to keep suggesting, but generally it’s so expensive that the people who plan these projects don’t bother with a business case. There are few examples anywhere in the world where it’s been done on a scale larger than just decking across behind a station.

Furthermore – what a lot of people don’t realise, is that on this project, the tracks rise back up almost to ground level between Ormond, McKinnon and Betleigh stations, due to needing to crossover drains etc. So a deck over wouldn’t actually be technically feasible, if there isn’t actually enough clearance over the tracks.

There still hasn’t been a proper CBA or business case done for this type of thing or any level crossing removals with or without value capture. It definitely is something IV should work on because some of these level crossing removals are marginal such as Eel Race Rd and McKinnon Rd itself. In the case of Eel Race Rd the council said not to even bother with it.
I am personally pro sky rail precisely because it’s expensive and bad urban planning to dig trenches and the government probably won’t continue it on other level crossings removals because it is too expensive or “uneconomic”.
If proper value capture is out of the question then Skyrail probably needs to be built on the majority of the remaining separations and should have been done on this one due to the bad ground conditions and disruption involved.

Eel Race Rd is an operational issue (as was McKinnon Rd) as much as economic.

Carrum station will need to be raised, as it’s not possible to trench through Patterson River. At that point, it might not actually be far enough to slope from the end of the platforms back to ground level before you got to Eel Race Rd.

On the Frankston line, I would expect that Chelt will be rail-over, although not sure with Mentone as there are significant heritage issues.

Everything from Mordialloc southwards will be rail-over. A small raised section through Edithvale, then an elevated section from just north of Bonbeach until somewhere around the Kananook Creek crossing.

Seaford Rd and that one in Frankston that I forget the name of will also probably go rail-over.