So this is what it looks like when hundreds of millions of dollars worth of infrastructure gets built rapidly in your neighbourhood.

Here are some photos and video of the first week of major works on the Bentleigh/Mckinnon/Ormond level crossings.

The end result will be three stations below road level, but first all the dirt has to be dug out.

150 (double) dump trucks are doing an hourly circuit between the work sites and a quarry in Dingley, taking away the dirt. Here a queue of trucks on the north side of Ormond station. 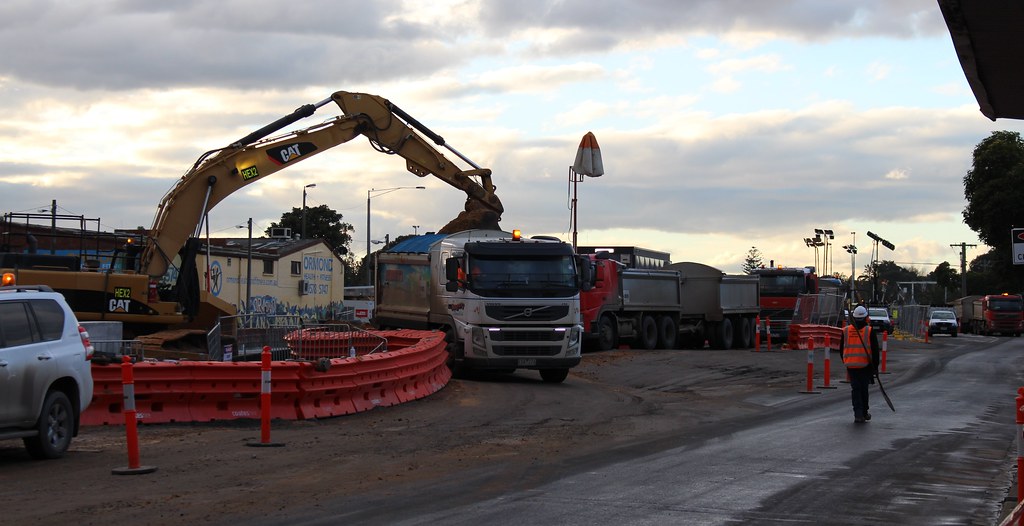 The view on the south side of North Road, digging out the rail line between Ormond and Mckinnon. 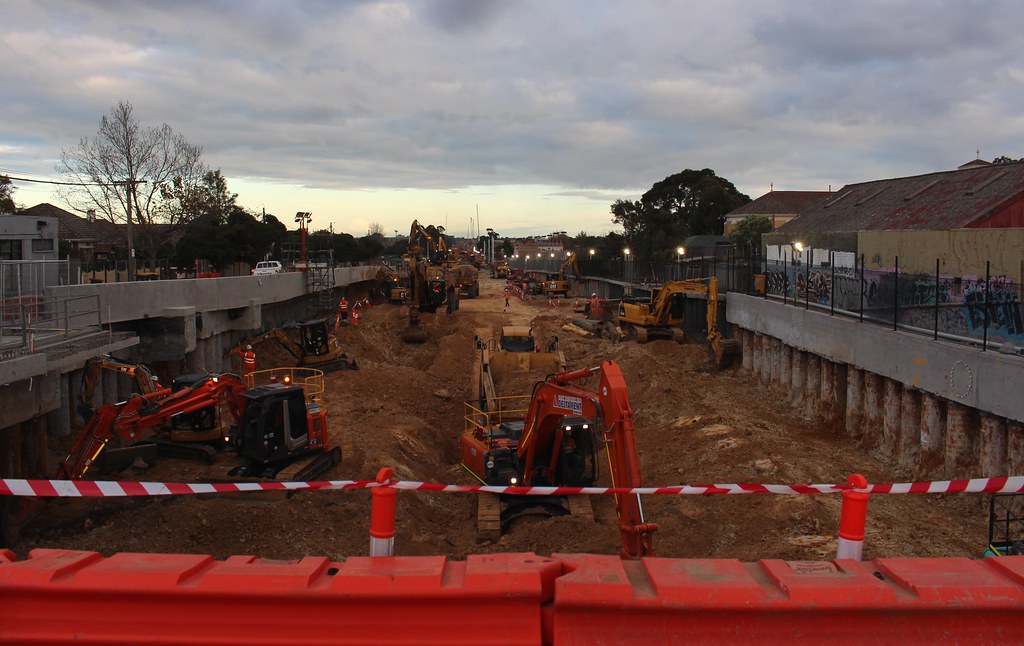 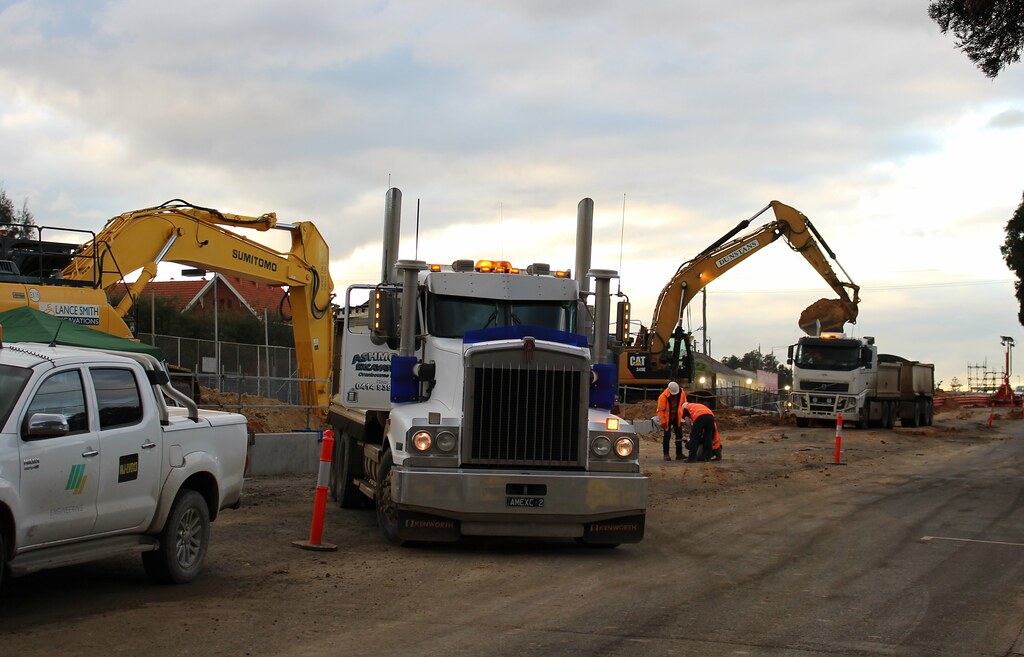 Some people want a crossing at Murray Road, midway between Ormond and Mckinnon. For now, there is one, for loading up more trucks. This is smack bang in the middle of a residential area. Accommodation has been offered to those most affected by the works. 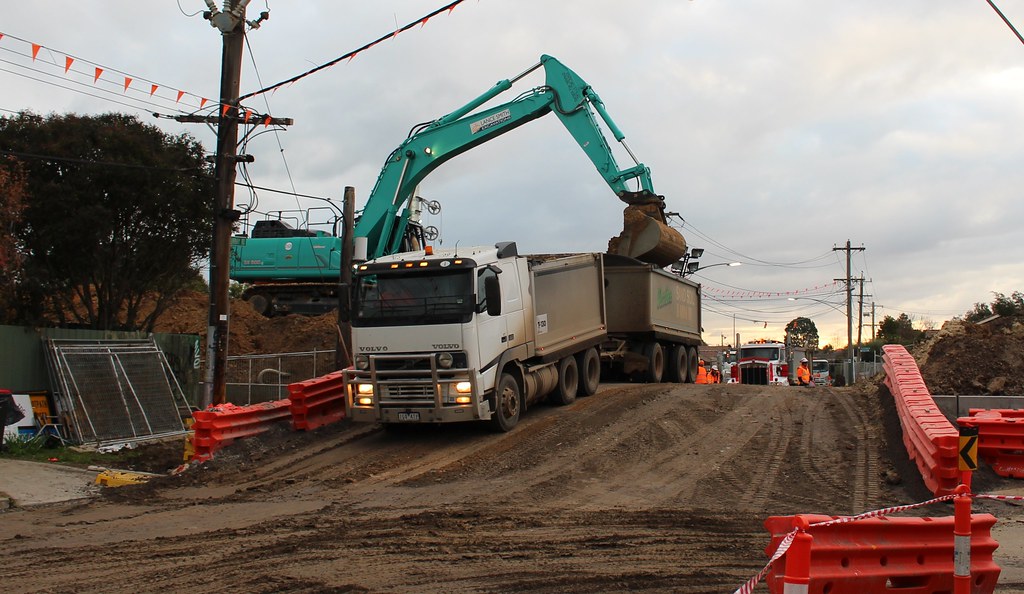 Temporary traffic lights are up at the end of Murray Road, to stop traffic so trucks can turn onto Jasper Road. Gotta keep the trucks moving. 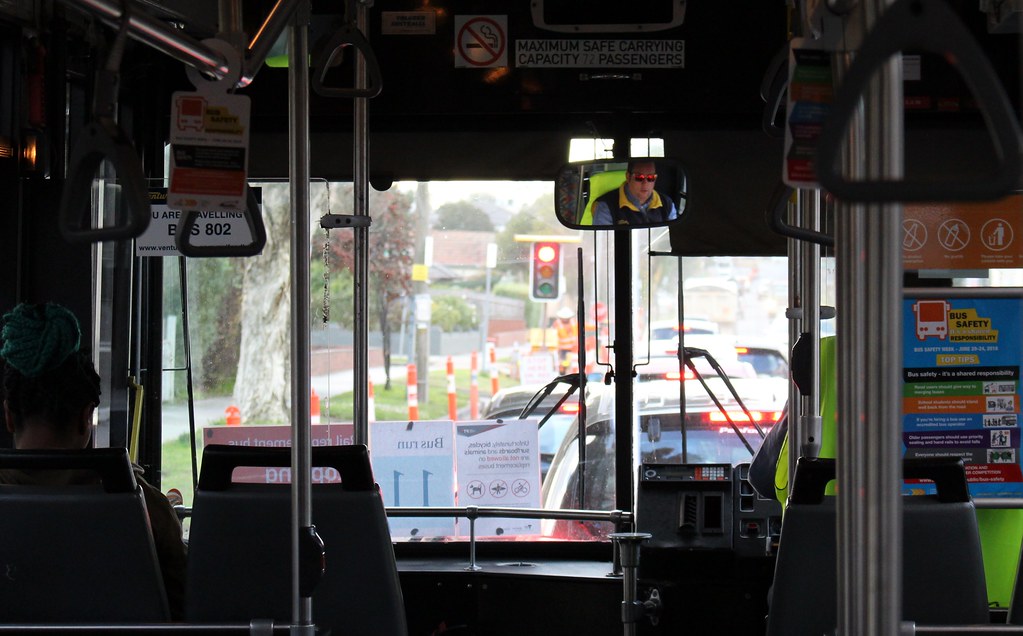 The hole in the ground formerly known as Mckinnon station, on the north side of the road. 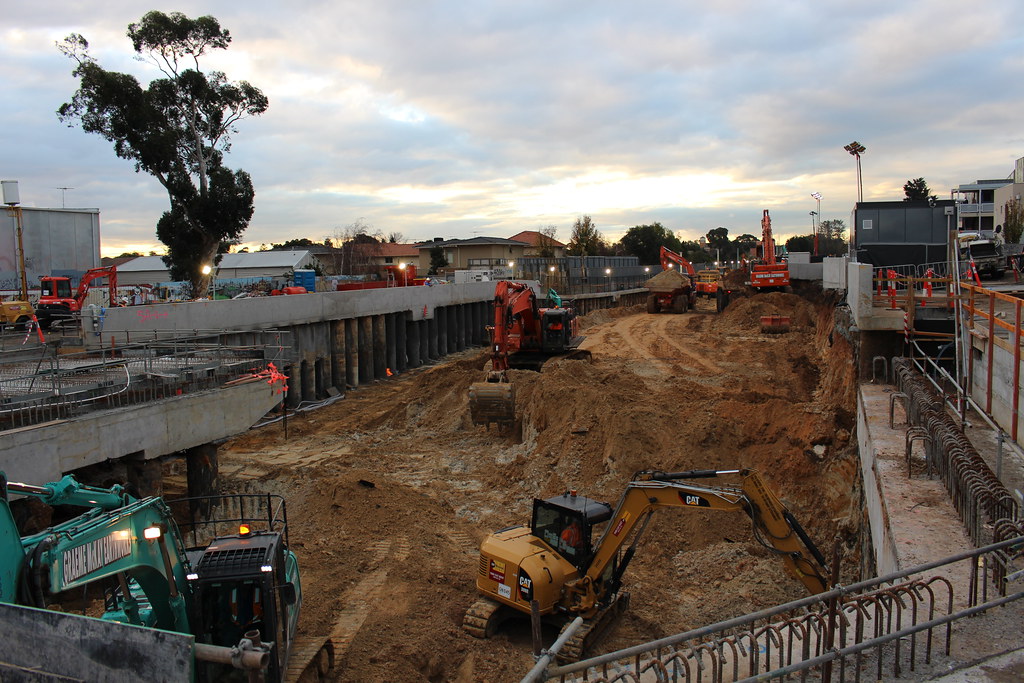 No shortage of interest from the locals, and from what I hear, many visitors from elsewhere around Melbourne are coming to have a look. 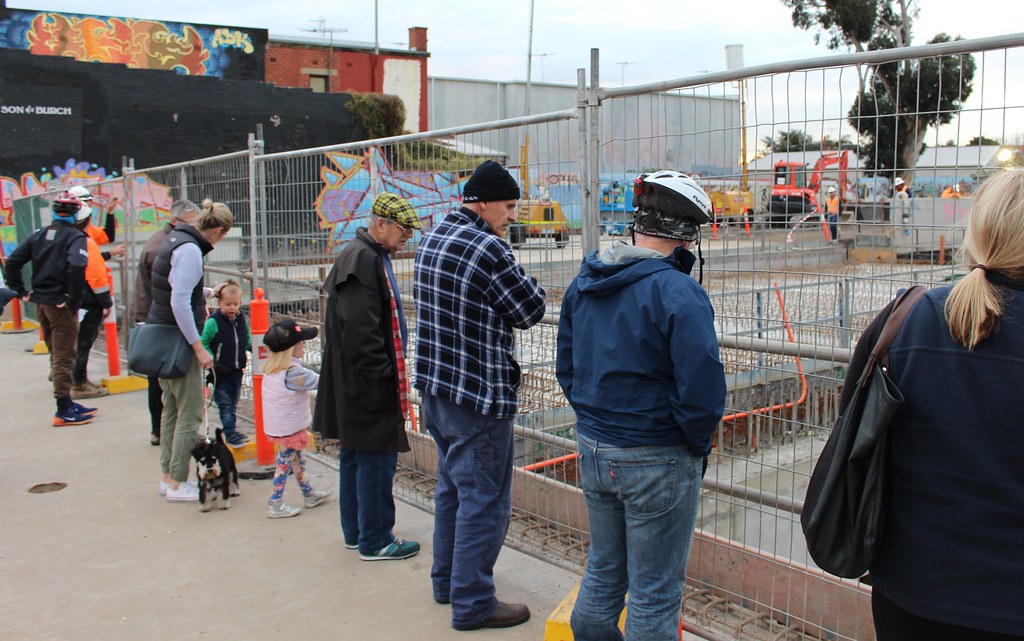 Some shops have been affected so badly by the works that they’ve virtually given up. 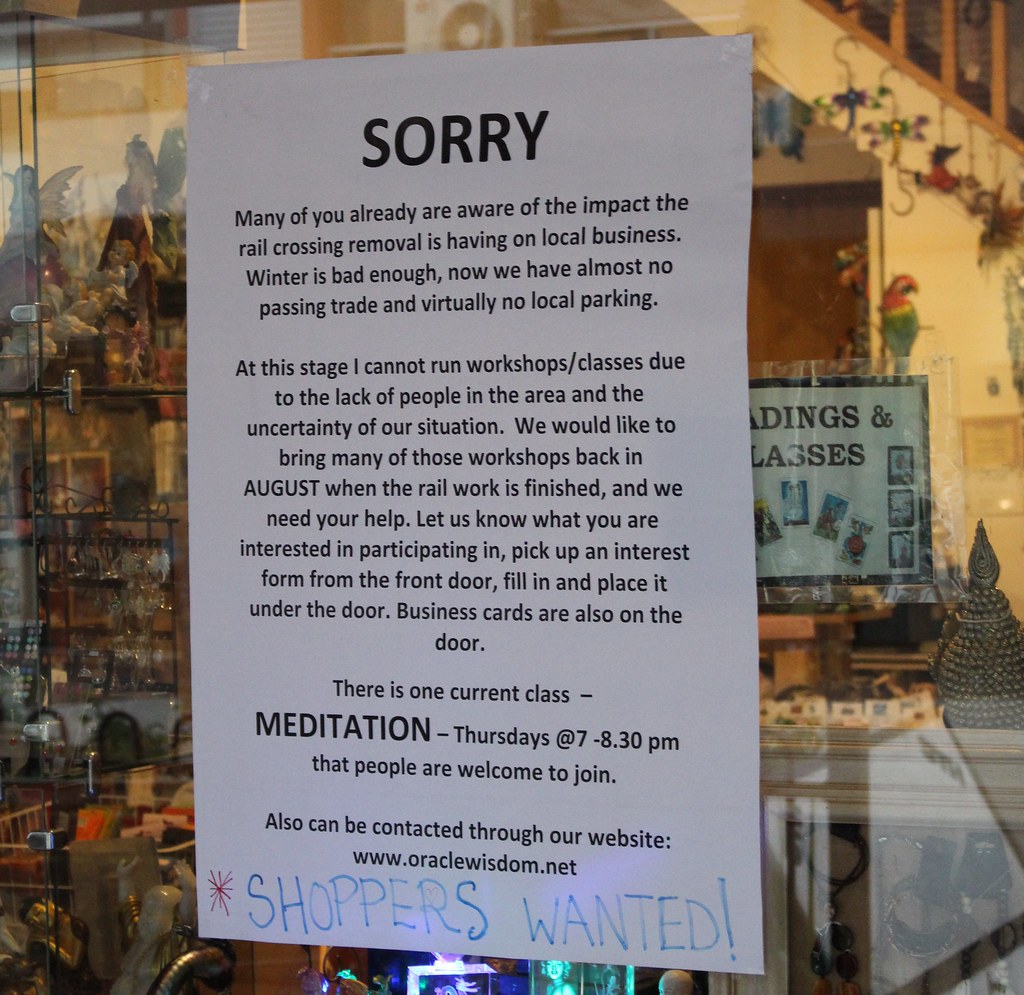 The view from near Mckinnon, looking south down Nicholson Street towards Bentleigh. 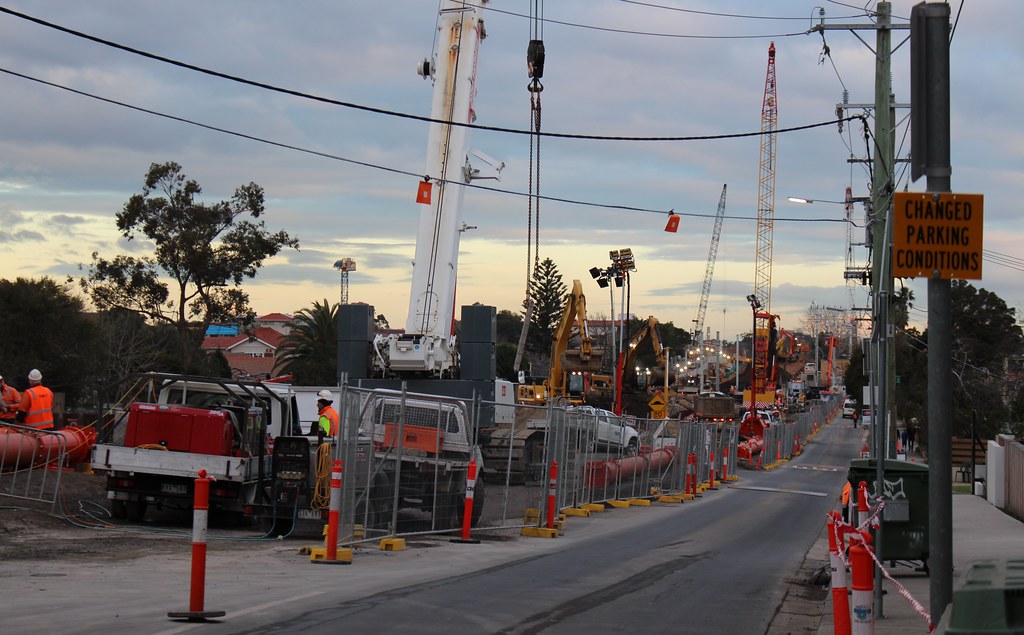 Nicholson Street, parallel to the railway line, is currently One Way so trucks can enter from the north, be loaded up with dirt, then head south and then east down Centre Road. I wonder how the garbage is being collected? Wouldn’t the garbage trucks only have claws on the left hand side? 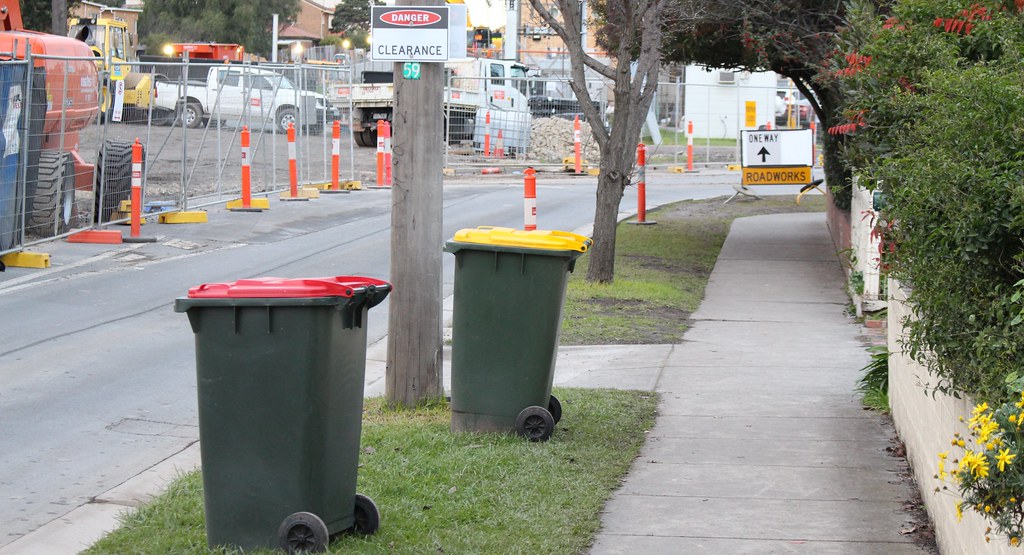 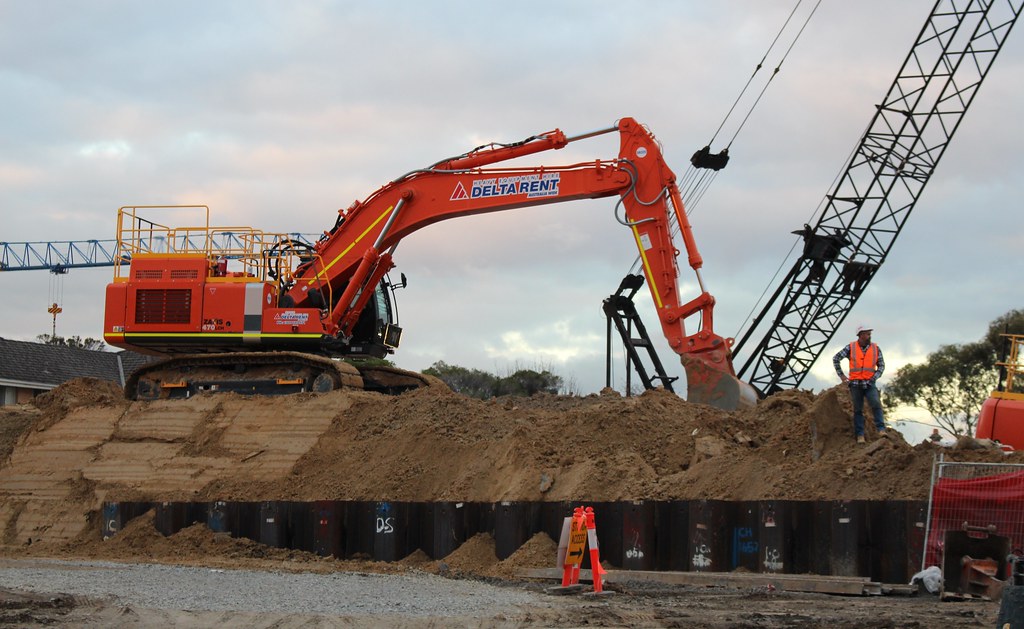 Part of the deck at Bentleigh station was built after the third track closed and the old station was demolished. 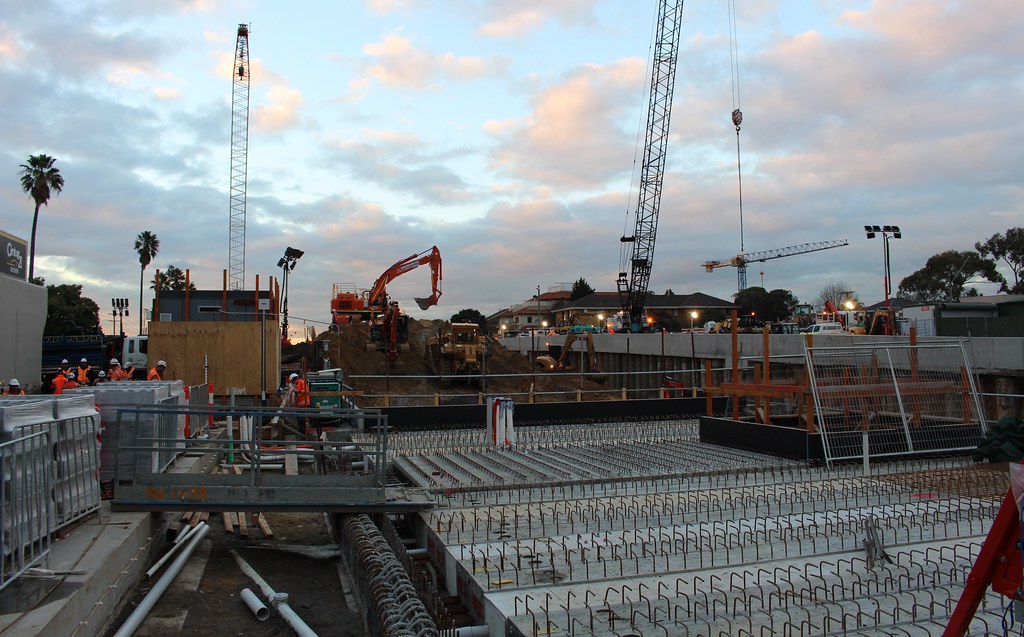 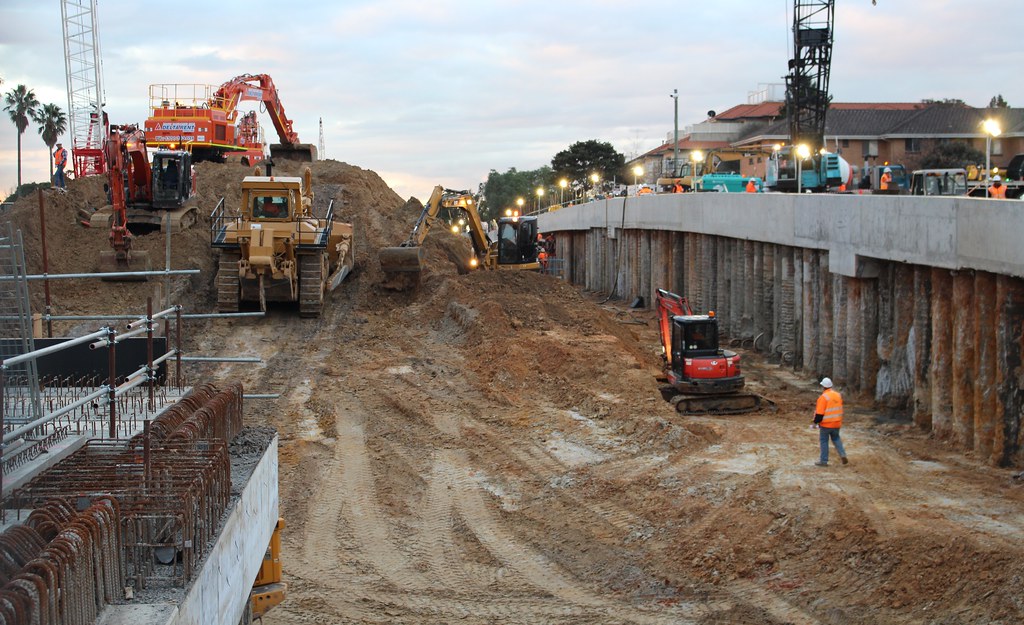 Traffic controllers stop westbound cars on Centre Road to allow the trucks (with their large turning circle) to turn out of Nicholson Street (north side) and Burgess Street (south side) to turn in and head towards the quarry. 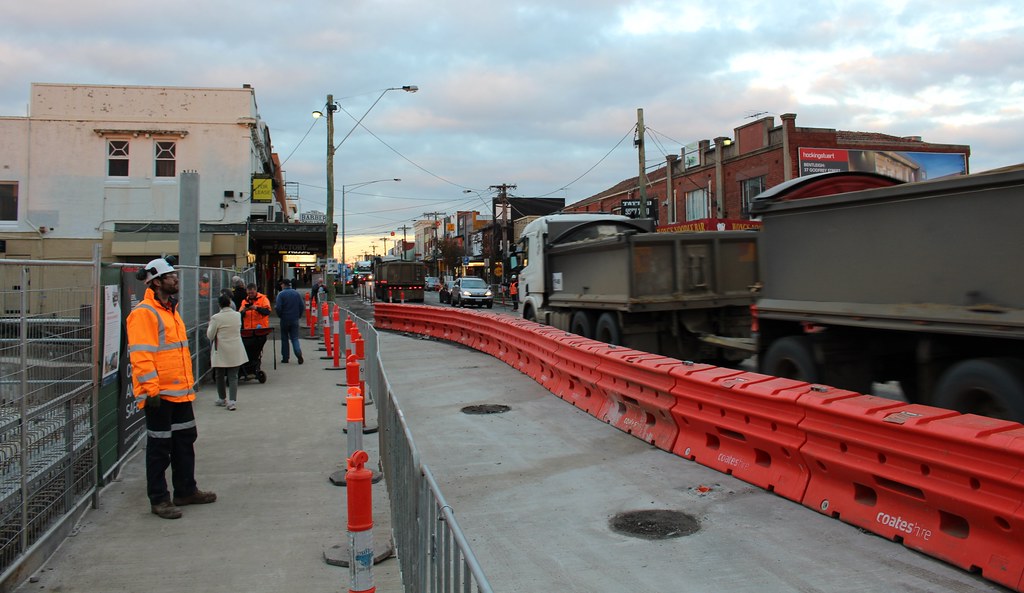 The trucks come through every few minutes on the truck routes. Here a convoy comes through Bentleigh shopping centre, where parking “adjustments” (eg restrictions) have been in place for about a week, as have traffic light modifications to help keep the trucks moving. 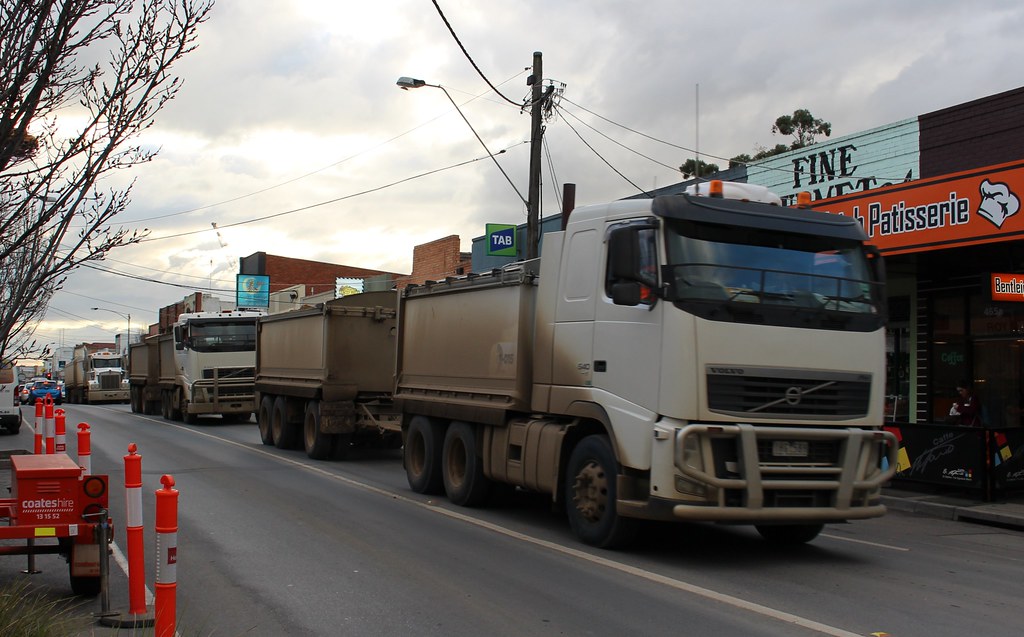 Despite the noise and road closures, the workers are getting on well with the locals. This bloke was asking the lady about her garden. 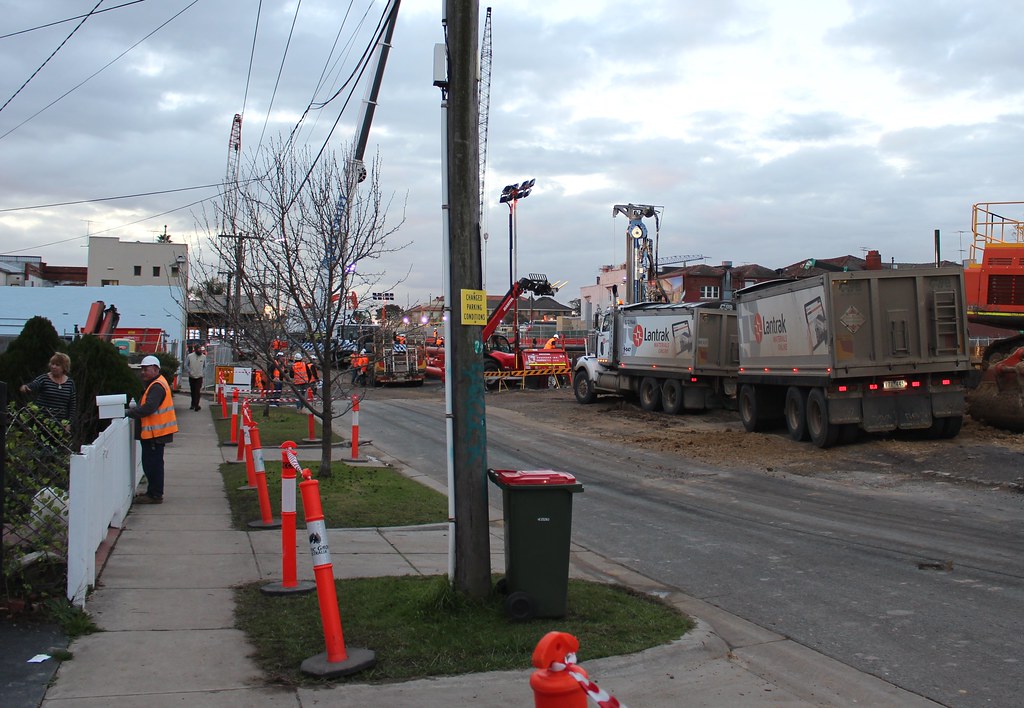 Queuing dump trucks in Burgess Street, south of Bentleigh station. I think if I lived here, I’d have taken the accommodation offer. 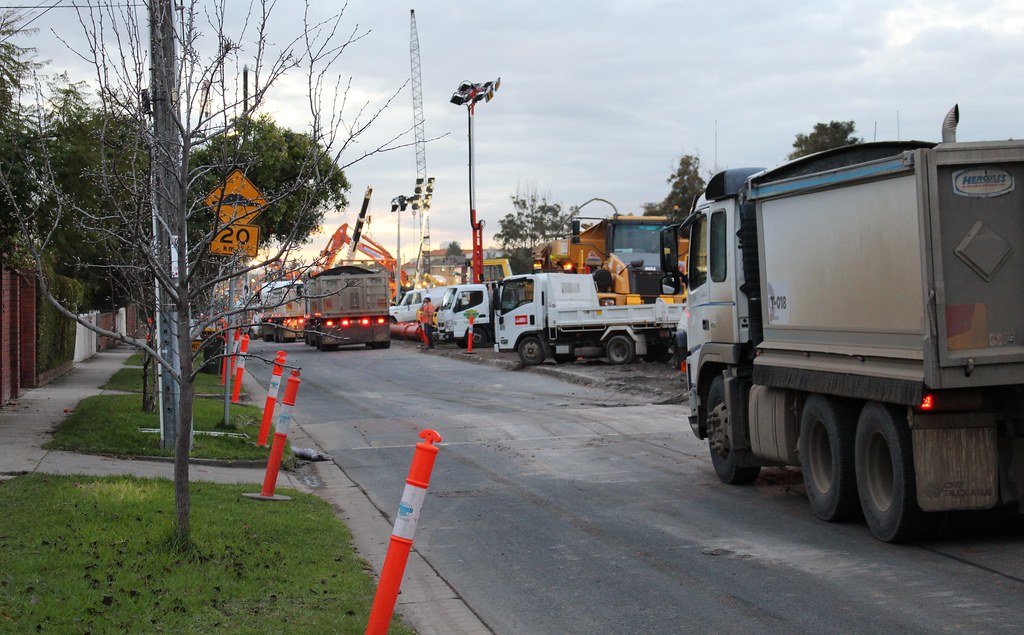 Nice to see a Hitachi on the rails again. The view from Brewer Road, south of the three stations, looking north. 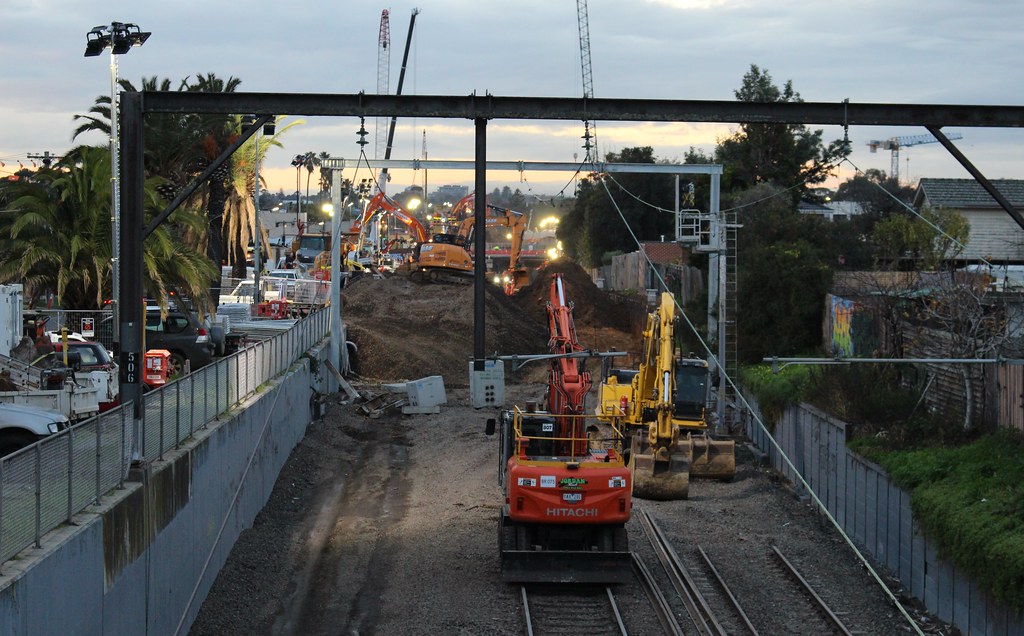 On Wednesday night there were plenty of onlookers at Bentleigh. Some parents bring their kids out for an evening walk in their pyjamas to have a look. Buses aren’t currently diverted, but some overnight road closures have occurred. 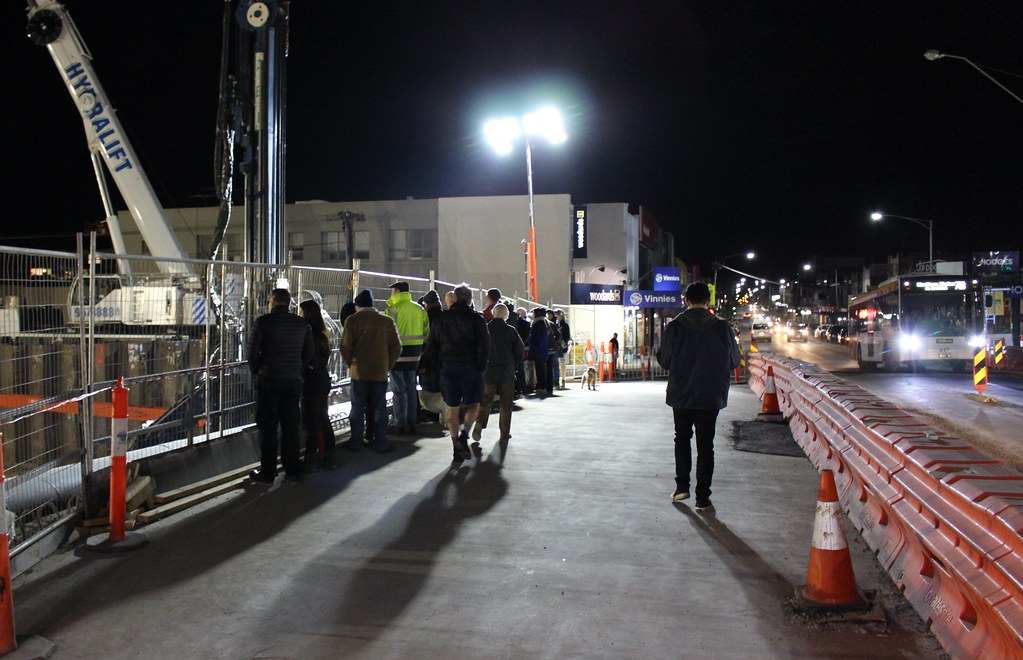 Looking south from Bentleigh towards Patterson. 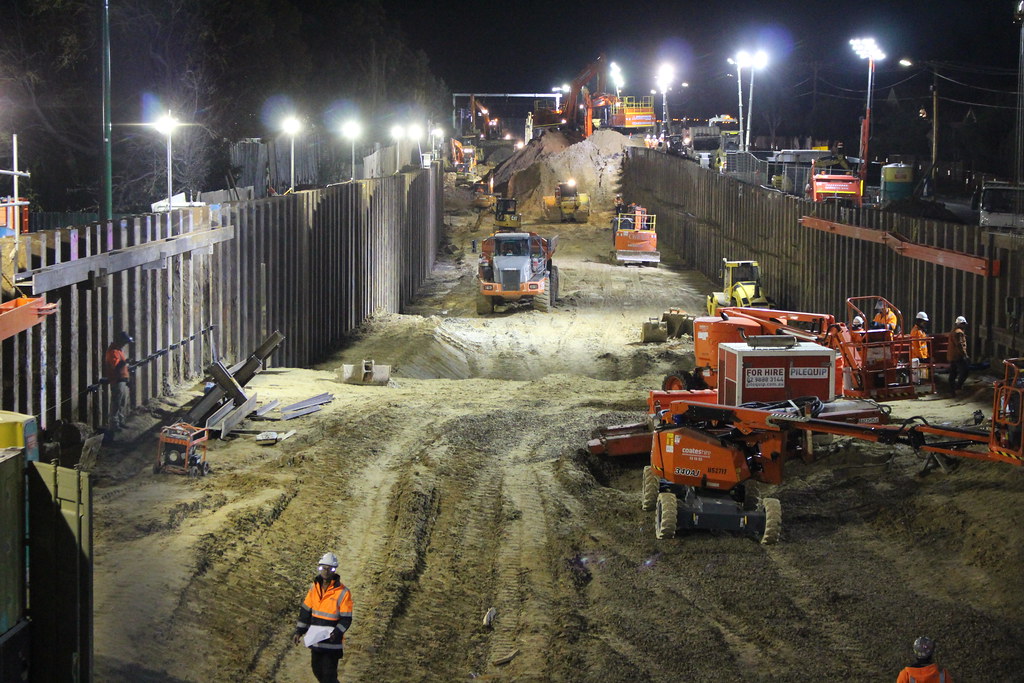 Looking north from Bentleigh, as yet another truck passes by. 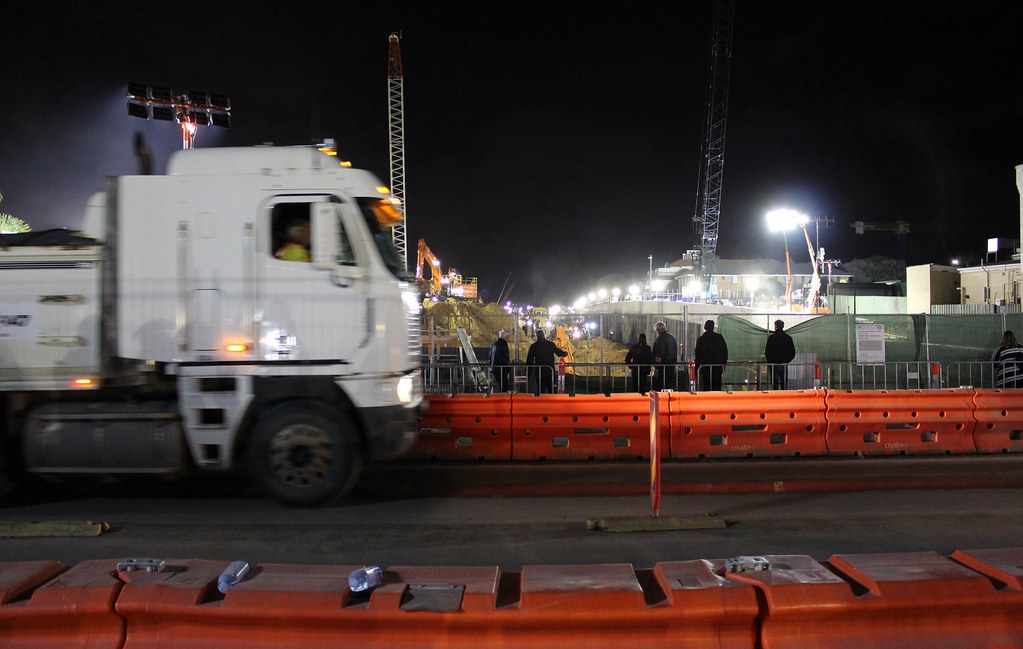 North side at Bentleigh, where the station will be. 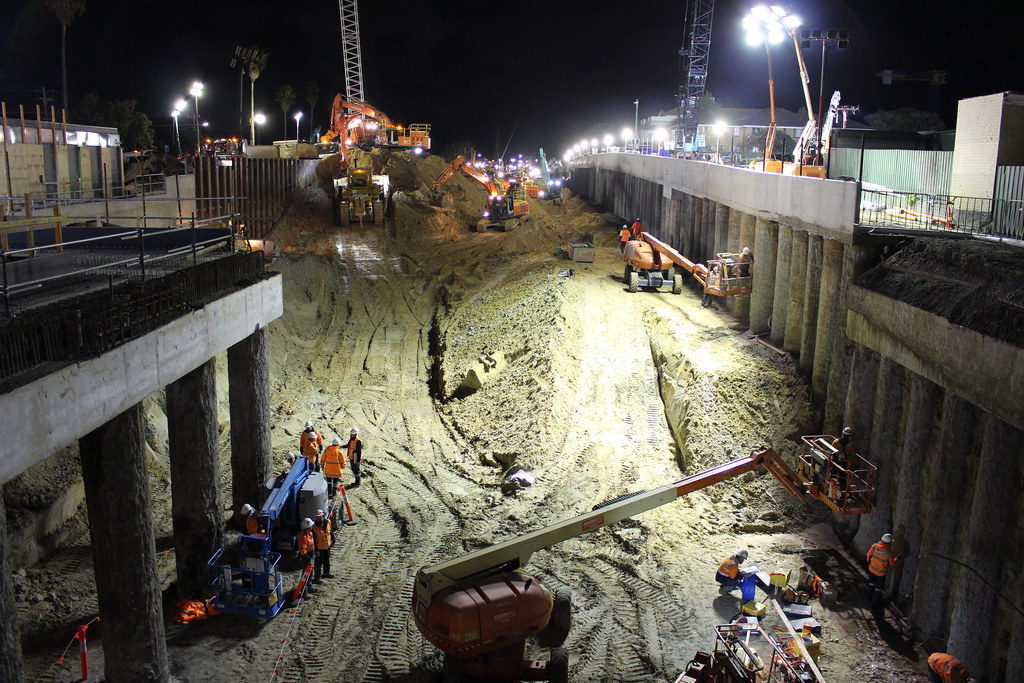 The trucks are having a noise impact along the routes to Dingley:

We cannot sleep with the constant noise of trucks during the night. They need to stop these trucks during the night or reroute to alternate roads on every second night so that we can at least get a decent nights sleep occasionally. One day I was sitting at the East Boundary Rd. / South Rd corner traffic lights and counted 28 trucks going in all directions during a minute duration. It is unbearable! — K Hills

And inevitably, dirt and dust is getting everywhere. The project team has promised they’ll clean up the roads… I wonder if that extends to cleaning cars as well? 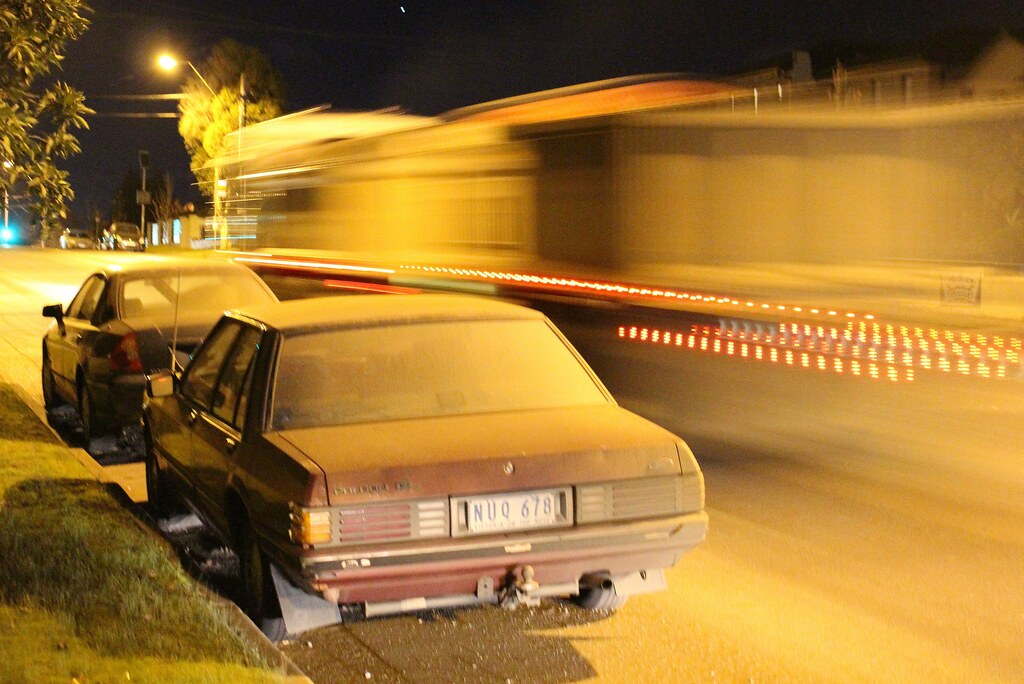 But the good news is that progress has been significant. If all goes to schedule, most of the digging should be finished early next week.

Hi @danielbowen in the last 3 days we've carted away about 185,000 tonnes – about the same as the whole volume we took away from Burke Rd

Finally, for all the construction geeks and their kids who love watching this stuff on Youtube, here’s 90 seconds of digging… view it full screen at Youtube to see it in all its glory.

Great update, thanks.
Yes, move out looks like the best option.
From your report and photos the works looks very orderly and methodical. Not chaotic as some residents feared.
Look forward to the “building” stage as opposed to digging.

Some of those photos are amazing – especially the ones showing the scale and magnitude of the thing.

What kinds of works should locals expect when they finish digging?

Awesome snaps, Daniel. The convoy of trucks is amazing. I live a kilometre north of the South Road extension in Oakleigh South, and you can hear the trucks rumbling along every minute or two *all* night long. At first I couldn’t work out what was going on, then it clicked.

It’s pretty bad that they need to suspend the entire train line for over a month but I guess it’s better than nothing. They should be working day and night to get it completed as quickly as possible to minimise the disruption to peak hour services. They even suspend all services for weeks on end to remove a single level crossing (eg. Sunbury line). In cities like Tokyo suspensions of that length would NEVER happen.

Wonder if it’s the same quarry the Harris cars are sitting it?
I quite like the idea of them dumping the old line on top of the old trains.

@Ben: They literally are working day and night. The works necessitate a shut of this length. I don’t know about Tokyo, but bustitutions (sometimes much longer) occur all throughout Europe on a regular basis. Unfortunately, it’s almost always impossible to improve transport infrastructure without significant disruption to existing infrastructure.

@Ben Sorry, I have to agree with “Me again”. When I lived in Europe (specifically Germany), you had shutdowns and re-routes like this all the time when they were building stuff.

@Leon – I’m not sure where the Harris cars ended up, but we were riding our bikes along the Dingley Bypass today and saw the Bentleigh spoil being delivered to quarries south and east of Elder Street in Clayton South/Clarinda. Quite an operation as the trucks are routed through in a circular fashion. Nice to see our property values increasing with bits of Bentleigh and McKinnon being relocated here!

Living right next to Gardiner Station, my car was never clean. Ever. It was becoming a bit too expensive to clean it every two days. Even had to replace my air filter after all the works had finished.

I still miss my on street parking. :(

Re the Haris cars.

At least a major quantity they where dumped in, is now a gun club firing range.

I knew of one of their members in the early 1990s, and plans where to concrete over that spot, to expand the gun club over it, and sure it went ahead at the time too.

I should go and have a personal look at it myself over the next day or two.

Given the protracted closure period and the amount of excavation required, you’d almost think that constructing this section of the Frankston line as a hybrid cut and cover would be ideal. Essentially you would have the best of both worlds – level crossings removed and new parkland/open space without the controversy of skyrail. Large, deep trenches are havens for graffiti, loitering and serve to divide small retail precincts in half. Yes, it might add a bit to the cost, but given how far below street level these trenches are and the length of the disruption period, large trenches are a poor use of scarce inner urban land and do not appropriately blend in with a modern urban streetscapes.

I had no idea that the “sky rail corridor on the Cranbourne-Pakenham line” had been re-routed via Ormond.

@Chris Leaving aside the difficulties is decking over a trench, this idea wouldn’t be possible as the trench through Ormond/Bentleigh/McKinnon isn’t full depth the whole way along. It raises to almost ground level between stations to go over watercourses, drains etc.