I’ve often thought that we have too many parking restriction signs in Melbourne. Some streets have them every few metres.

One way around that is to use line markings. As a long-time watcher of British TV, I’m somewhat familiar with yellow lines: single (roughly: no parking ), double (no stopping at any time), red (roughly equivalent to a Clearway).

It’s not well-known, but we have some variants here: you’re not meant to park along a yellow line.

You’d think it might save some signage… well not in this case, spotted near Patterson station… the council has put a sign with the line (which is only a couple of metres long) to explain it. 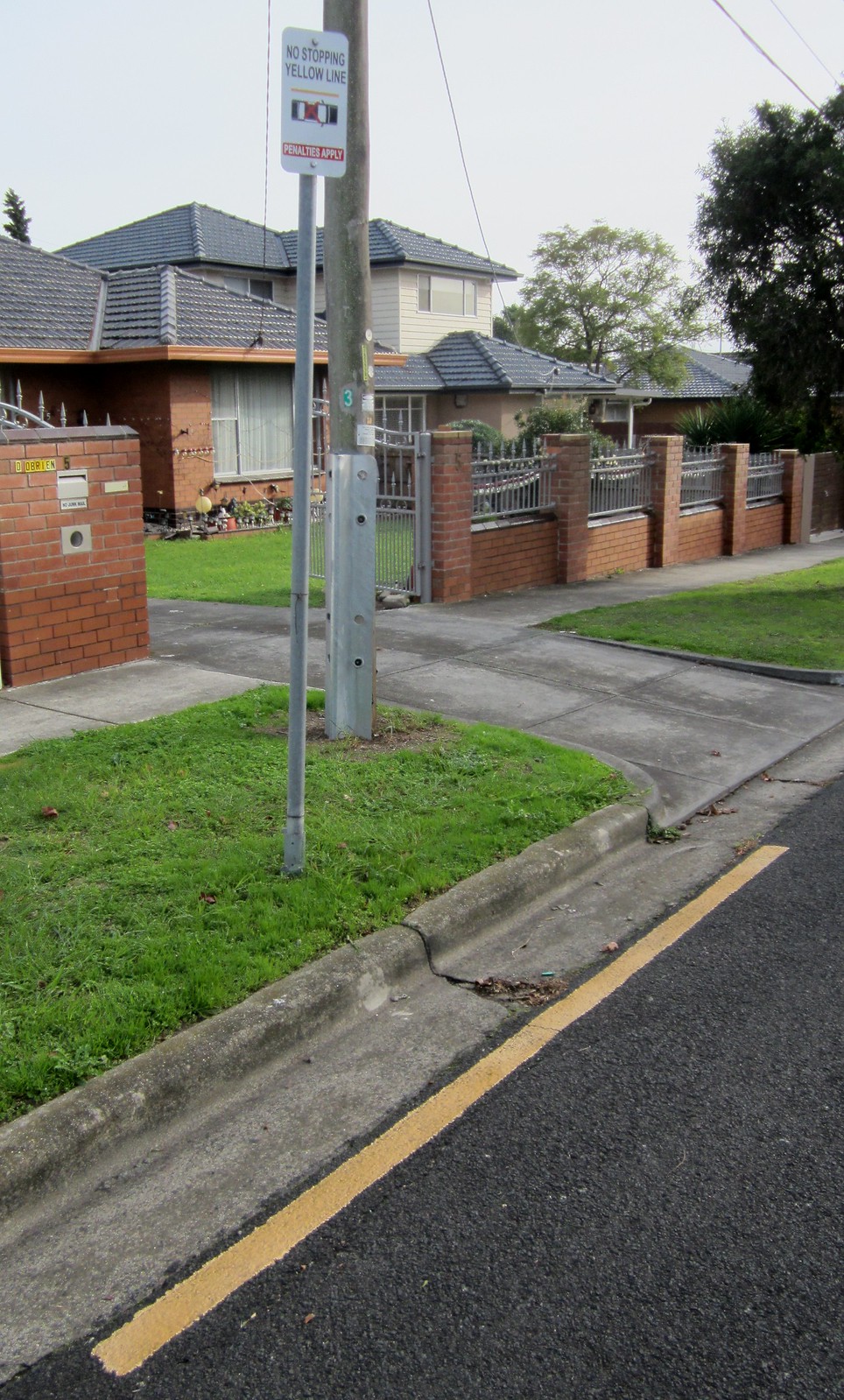 Meanwhile down at Mornington, one motorist is disputing a fine, declaring it “unAustralian”… seems a little over the top for a $91 fine.

I wouldn’t object to more use of lines to avoid having to put up signs everywhere, but given so few people seem to know about them, some kind of education campaign might be needed.

There does appear to be a communication issue with changes to rules. I only learned about the no-parking yellow lines relatively recently when I noticed one near Jordanville station and looked it up.

Of course the October 2015 image shows a black car parked fully across it, if you move up the screen a bit and zoom in you can just see the end of the line. The line is not there in the July 2013 image, and of course the dark grey car is partially blocking it.

Another change that I don’t recall being communicated was the switch in terminology from “no standing” to “no stopping”.

Interesting … can’t find them in the ROAD SAFETY ROAD RULES 2009 (http://www.austlii.edu.au/au/legis/vic/consol_reg/rsrr2009208/) … suspect a Court will find them non-binding?

Yellow lines for No Stopping have been in our road rules for nearly 20 years. I installed some in South Morang or Mill Park back in about 2000. They were in a location where most people would realise they shouldn’t stop anyway (around a curve, with little road width between the kerb and a traffic island, I think), and we didn’t add any signs.

The confusion might arise because in Australia, a single line means No Stopping, whereas in Britain it’s only double lines that mean No Stopping. Single lines in Britain just mean No Parking.

The change from No Standing to No Stopping happened with the introduction of the Australian Road Rules in 1999 or 2000. It meant Victoria adopted the words already used in NSW.

Yellow lines for no stopping is part of the road rules, but seems to be used sparingly in Melbourne. This is quite common in Brisbane. I thought maybe it was variation between state laws but I have seen it used here.

I used to think that it meant “no standing”. What is the difference?

For $91, I wouldn’t bother going to court if the ruling is quite clear. Though if the lines are as faded as it appears in the article, I can empathise with the confusion. I would hope that they maintain them often.

I copped a fine recently in Darwin. I’d never seen the lines before, didn’t notice them at the time (they were partially faded and as it was to attend a school fete cars were illegally parked all over the place) and only about the rear 1m of the car was abutting it, but nonetheless I checked the VicRoads rules and it was clearly stated so I copped it.

I agree there needs to be some education.

Sorry, that should read Darebin, not Darwin. As in City of Darebin. Silly autocorrect.

There was a yellow line in Hastings St Hampton but it has faded. No-parking signs have been erected so there’s no ambiguity.

Vehicles parked across the Upfield Shared Path entrance off Railway Place, Brunswick, on a yellow line along the kerb cutting. October 2010.
https://goo.gl/photos/zPJs9fMwRRMMoefT8