(This post backdated. See all Singapore trip posts on this link)

As I previously mentioned, we were invited to my cousin’s wedding in Singapore, so we decided to go for the week. Why Singapore? A distribution of family between Belgium, Singapore and Australia.

It was very cold when setting out — only about 3 degrees — so I found a combination of clothes that’d keep me warm on the way to the airport but not weigh me down unnecessarily in warmer weather.

I’d packed the night before, and headed out about 8am, onto a train for Southern Cross.

Is it just me, or is there no sensible way to get from the metropolitan platforms at Southern Cross to the Skybus terminal? It pretty much involves leaving the station complex, or negotiating a flight of stairs (not a good idea with wheeled luggage), or following some suspect signage to…somewhere? 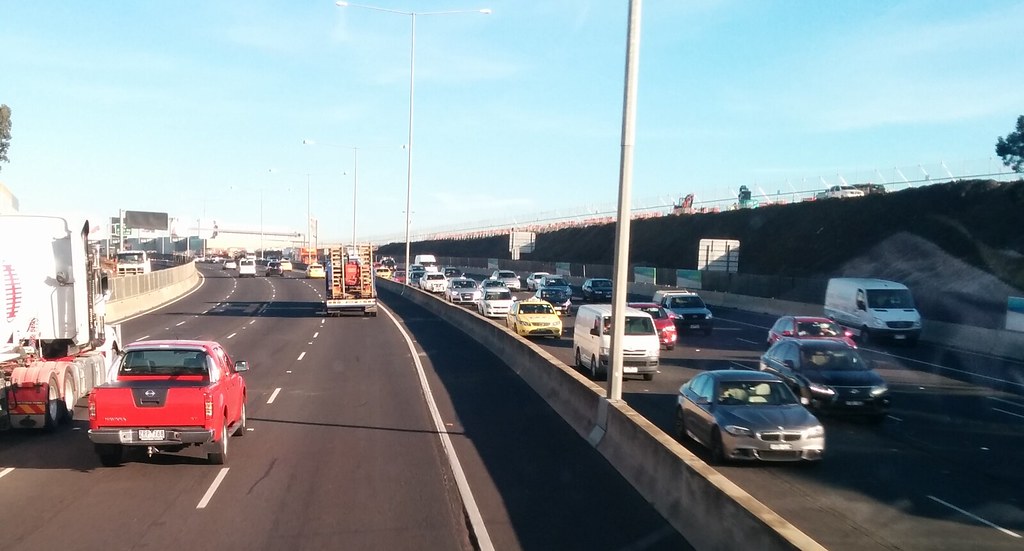 Some heavy traffic inbound on the freeway, but our outbound bus made good time, it was about at the advertised 20 minutes when we arrived.

Some confusion around check-in. When I’d done it online the day before, the Qantas web site didn’t let me choose seats. I couldn’t find any other way to do it, and ended up shelling out $60 for choosing two seats, just so we could sit in a double, and I could have a window seat. But the lady at the airport said this was just a request, not confirmed, and it hadn’t been granted. It shouldn’t be charged to my credit card then, right? Hmm we’ll see.

I think the problem had been that online check-in had been done for one person at a time, not the two of us together, because I didn’t have details of one of the passports handy at the time. The system then decided it was too hard to give us any choice of seats. Watch out for this one the next time you fly.

Through security and any number of duty free shops… Do they do anything with those Departure Cards? Can’t they gather all that information from the data the airline gives them? And what on earth is Essence of Kangaroo? 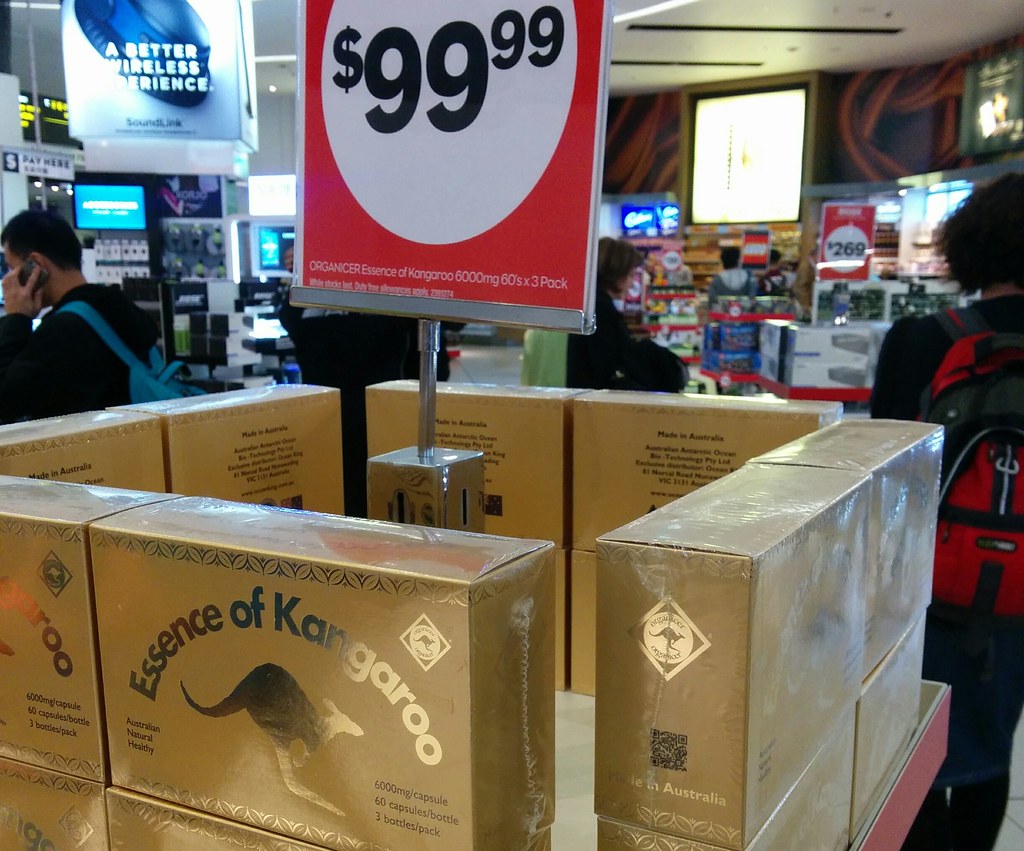 We found our gate and waited.

That clever Google Now app on my phone was prompting me, telling me the plane was delayed 15 minutes. I don’t know how it worked out I was meant to be catching it (I think it rifles through my Gmail account), but I’ll give it points for smarts. A little later they announced just such a delay.

The flight was pretty good, on-time and tasty food. But the in-seat entertainment system could have been a bit better: the touch screen didn’t quite work when you touched it — this was fine on the way home a week later, so perhaps it was that specific seat.

I’d forgotten to bring my own headphones, and the airline ones aren’t great — they made it impossible to hear dialogue on most of the available videos, and subtitles weren’t available for anything, which must be a pain for the deaf — I wonder if that’s in contravention of the Disability Discrimination Act?

Being daylight, I snapped a few photos during the flight, though I don’t really know where some of them are. I’m guessing these are both are somewhere in Indonesia. 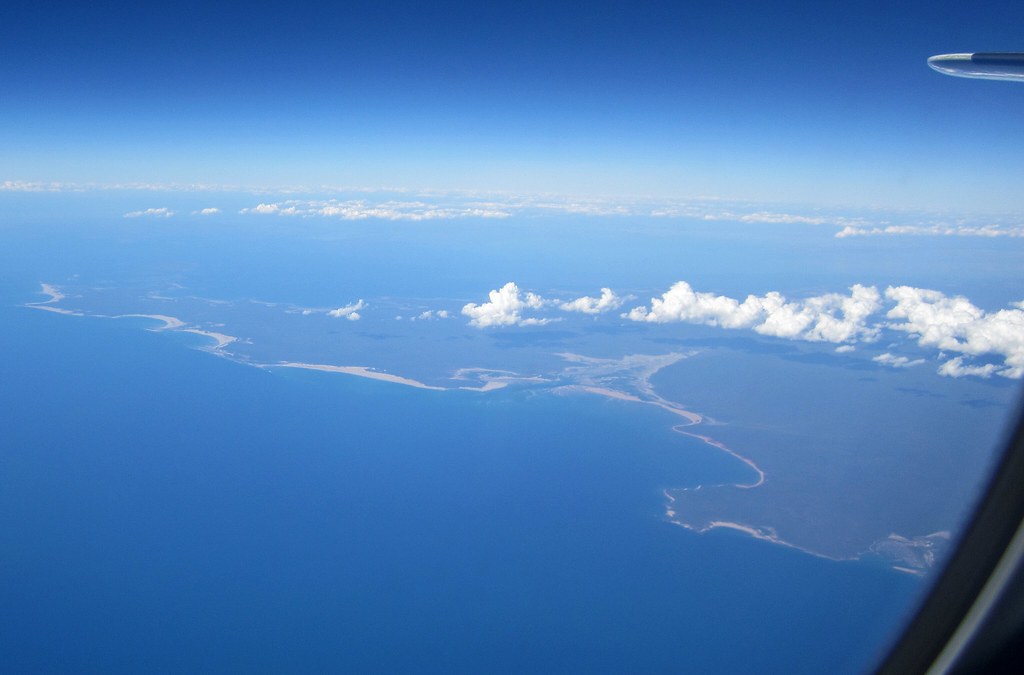 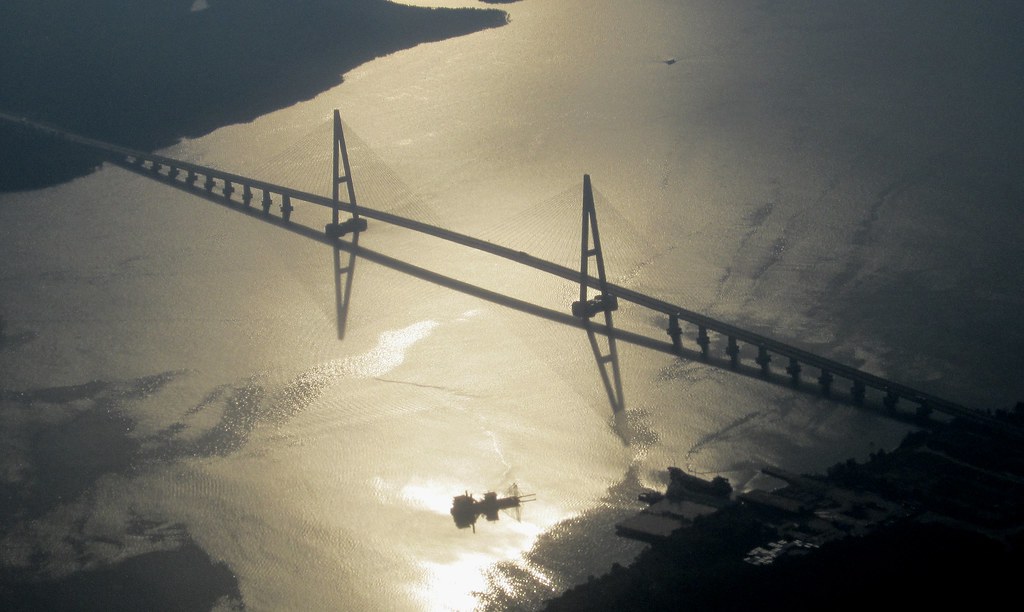 We landed and passed through immigration easily.

A “Skytrain” rubber-tyred train got us from Terminal 1 to Terminal 3, then we took the lift down to the MRT station. I’d been given a couple of EZ-Link smartcards, and it turned out they had $10 each on them — memo to pay Tony back for these. 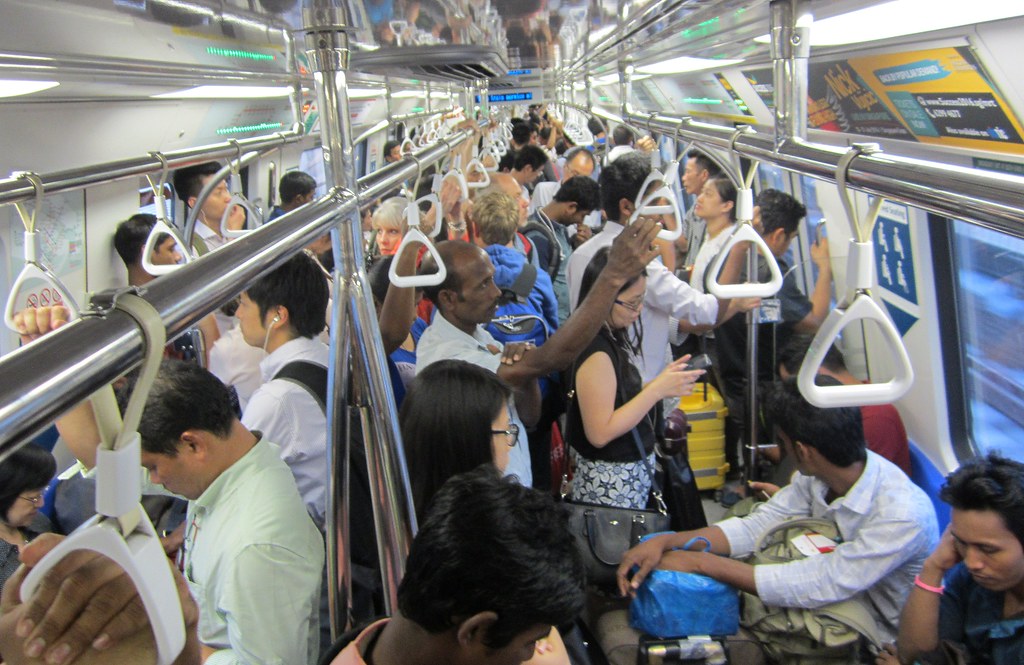 Train from the airport (with a cross-platform change and quite a bit of elevated rail along the way — lots more about the MRT later). The trip from the airport to City Hall cost us just $1.70 each.

Navigating the streets wasn’t too hard, and we got to the hotel in good time. A slight glitch at check-in; my Mastercard decided not to cooperate. I realised later (when the bank emailed me) that some time ago I’d put a lock on overseas in-person transactions. Whoopsie. Easily fixed once we got the hotel WiFi happening, and thankfully I had another credit card.

The hotel was the Peninsula Excelsior, in the downtown area, and this proved to be excellent. Very central, not too expensive, and room was quite roomy — you know when hotel rooms and their bathroom seem just a little bit too small? No problem here. Very helpful staff. The only criticism I’d have was there was a bit of noise from a neighbouring room on a couple of nights, and from the hallways early in the morning. Like perhaps many hotels, not designed for noise-proofing. But I’d definitely recommend this hotel.

After settling into the room, we explored down North Bridge Road. Despite being well after dark at this point, it was pretty warm. Ramen noodles presented themselves for dinner.

A walk around the area found us at the Memorial for the Civilian Victims of the Japanese Occupation. Silent and empty at night, it was still quite moving. As we’d find at the Museum the next day, the WW2 occupation by Japan has understandably left its mark in Singapore. 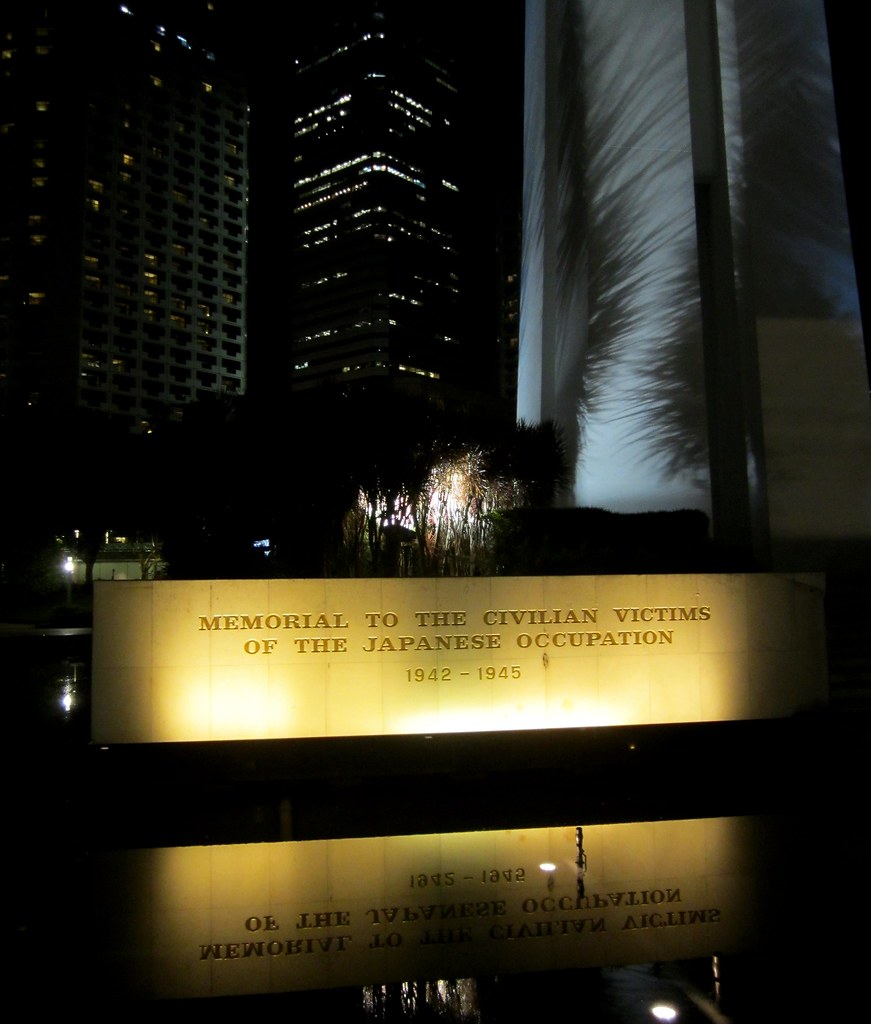 Back to the hotel via a 7-11. We bought milk for making tea (the hotel fridge had only UHT), and I tried for the second time to buy a local Singtel tourist SIM. The first had been at the airport; they didn’t have the right ($30) one. At the 7-11, the lady just said she couldn’t sell me one now. Not sure if that meant she was out of stock or something else, but with a queue of people behind me, it didn’t seem like the time to ask.

Hardly urgent; it could wait for tomorrow.

6 replies on “Singapore here we come”

I believe that bridge might be in the state of Johor in Malaysia, unless I’m getting it confused with some other bridge in Indonesia. Though looking at the size, I think you took that while the plane is descending.

If you ever get on the buses in Singapore, the double-deckers are almost exactly the same as the ones run by CDC in Werribee. They are after all operated by the same umbrella group.

Fares are cheap but they do add up if you do a bit of travelling. Fares work differently but I think they are trialling monthly tickets for the MRT trains.

“shelling out $60 for choosing two seats”. With Qantas, I thought that seat selection was free within 24 hours of flight (e.g. when doing online checking in). Is that not the case?

Google+ also appears to change in-app notification status according to whether the Gmail email notification has been read.

@Roger, see the following paragraph. It’s a problem with the Qantas web site.

From the distributor’s website:
“ORGANICER® ESSENCE OF KANGAROO 6000MG 3X60’S GIFT PACK
Kangaroo is an animal that can be characterized by its strength, power and energy. This product is made from nutritive and concentrated kangaroo meat powder, which is high in protein and low in fat.”

Other similarly labelled products out there include dried and ground kangaroo penis and testes…alleged to improve sexual performance.

In a further digression, the TGA website also warns against a product packaged as ‘Kangaroo sexually invigorating essence’ which contained undisclosed Viagra.

Aren’t you glad you asked?