After about a year of construction, the Burke Road (Gardiner) level crossing was finally removed in January. One of four train/tram crossings (tram squares), it had long caused delays to both, as well as pedestrians, cyclists and motor vehicles.

I went and had a look a month or two back. The design isn’t outstanding. In particular the train/tram interchange is stuffed — they’ve managed to engineer it so that you have to cross two sets of lights to get between them. You could easily see your tram depart while waiting to cross from the station.

Here you can see the station exit on the left, and the tram stop on the right. 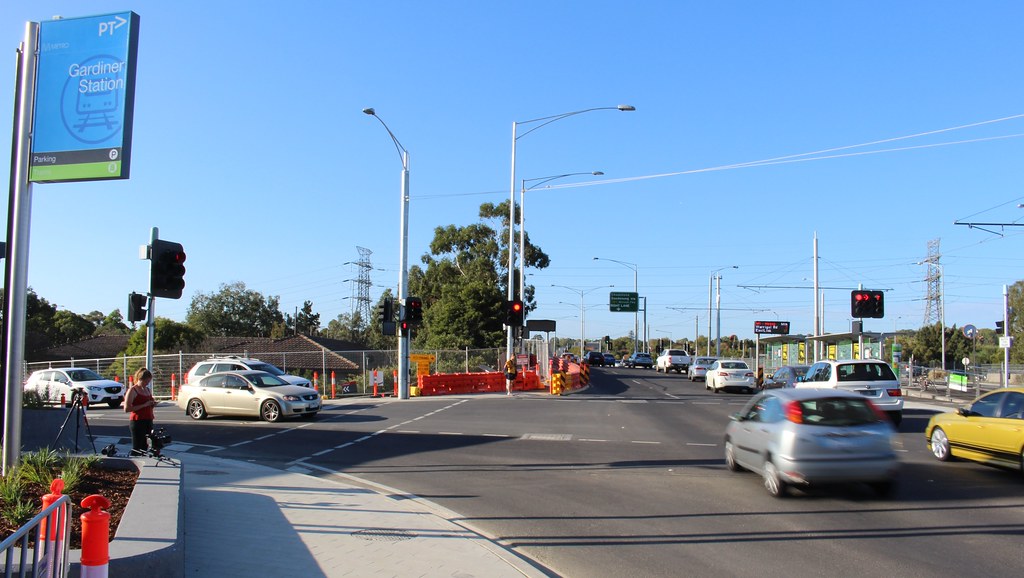 This means that for changing between trams and citybound trains, it’s actually worse now than it was before.

This sort of stuff shouldn’t be hard. The Brits, who we often seek to emulate, can manage it. I recall seeing the new “TramLink” light rail system at East Croydon station (circa 1999) in south London — they’d engineered it so the tram stops are right outside the station.

Given the Burke Road tram comes around the corner at Malvern Road, it shouldn’t have been difficult to run the tram along the western side of the road as far as the station, but instead the tram is in the middle of Burke Road — separated from you by the traffic. At the very least the tram stop should be directly adjacent the station so there’s only one road to cross.

Very disappointing, but unfortunately hardly surprising — even outside our biggest stations such as Southern Cross, the trams are multiple lanes of traffic away from the concourse.

Snooping around the station I was also struck by the lack of shade on the outbound platform while I was there. Hopefully in the morning on the citybound platform (when people are more likely to be waiting) it’s a little better. 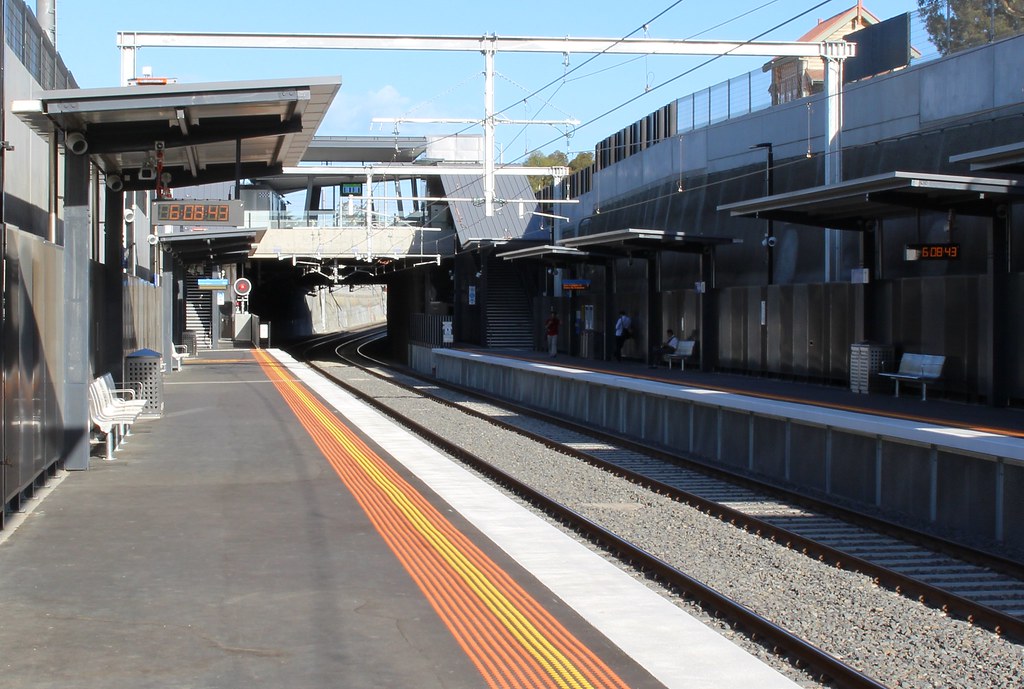 The adjacent trench for the trains was already tagged. 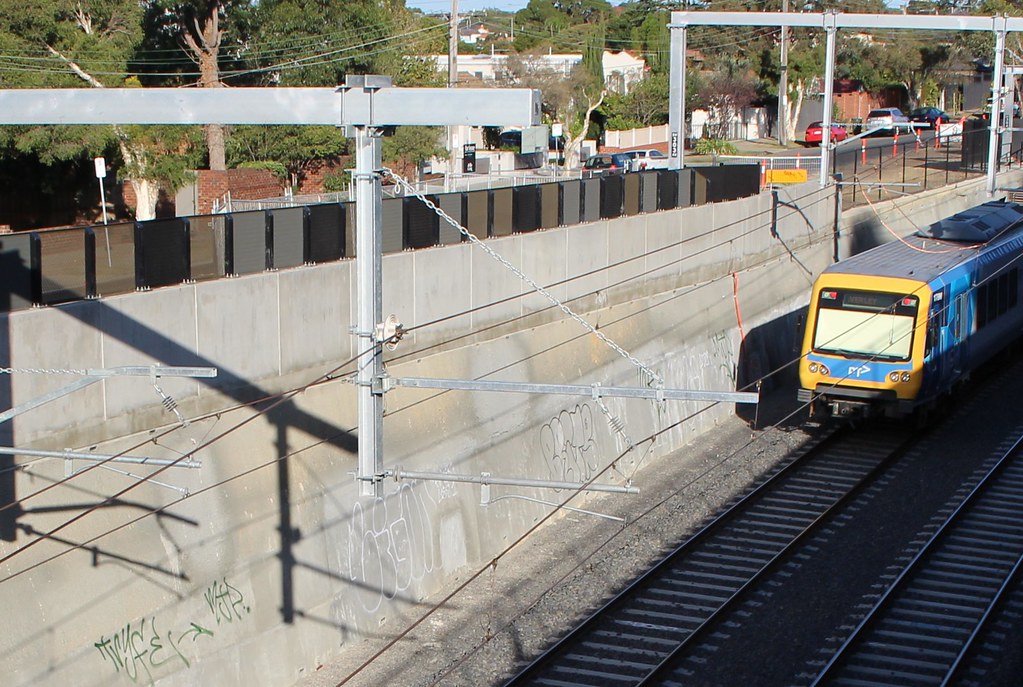 One bit of good news; when I was there, the platform Passenger Information Displays were the typical suburban two-line LED jobs, but the display on the concourse shows the next two departures in each direction. If they can just get similar information onto the platforms so you know when it’s worth waiting for the next train rather that squeezing onto the one that’s arrived first. 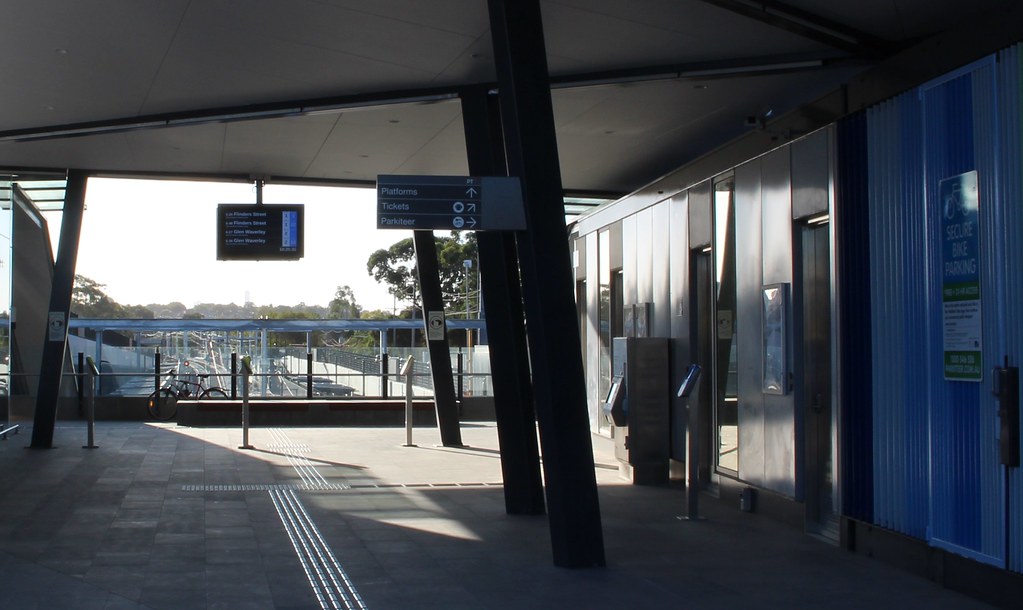 Anyway, to the point of this post: I’m hearing on the grapevine that motor traffic has already increased by 20% (3000 cars per day) since grade separation.

But has it helped the trains and trams? They both used to crawl across there, and trams would get held up whenever trains were approaching.

Taking a look at Track Record punctuality figures, what do we see? 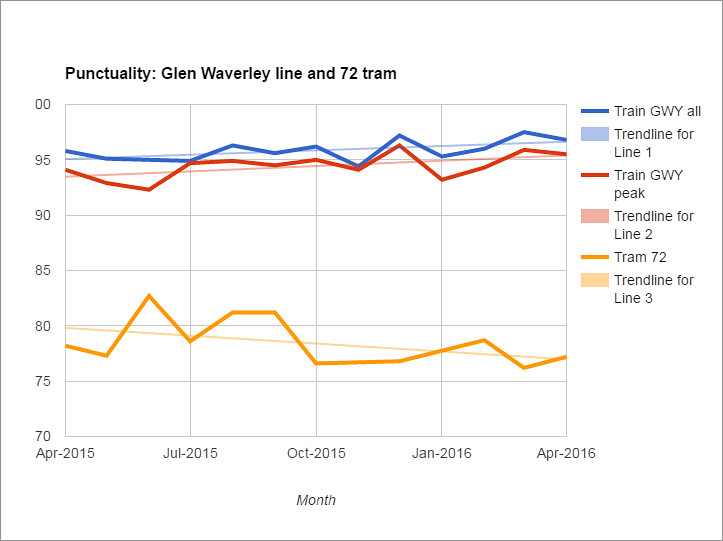 There’s a slight trend upwards on the trains, at both peak times and across the day. That might reflect the higher speeds they can achieve without the tram square speed limit, which can be as low as 10 kmh.

(I’ve excluded the tram figure for January itself; at 86.7%, almost 10% higher than December, it’s clearly an outlier, probably due to quiet holiday road traffic along the route and altered operations while the crossing work was happening.)

Perhaps the increased traffic, and/or adjustments made to nearby traffic lights, means any gains for the trams haven’t materialised?

There are no doubt some lessons here in terms of better interchange, better on-road priority for trams and buses to weigh against the huge benefits to motorists, and some level of control (such as plenty of responsive pedestrian crossings, especially in busy shopping centres) so that grade separated roads don’t become high speed traffic sewers.

As we know, level crossing removals benefit pedestrians and public transport users, as well as motorists, cyclists and emergency vehicles. But at Burke Road, it appears the benefits for tram users aren’t obvious just yet.

11 replies on “Burke Road level crossing: train punctuality improving, but no visible benefits for trams yet”

Your observation of the lack of shade on the outbound platforms indicates that those designing the stations truly believe there are no people waiting for outbound trains. The same design has been inflicted on Mitcham, where on a rainy or hot day, the only protection from the elements comes from the road crossing above the station. Only the inbound passengers are offered shelter along the platforms. There appears to be a mentality at PTV that these trains are only used by people travelling into the CBD and back out again, and that nobody ever alights from a tram or bus and then catches an outbound train, for which they might have to wait 20 minutes.

The trench halfway out to Glen Iris is ugly, towards Tooronga isn’t a problem because the line is ‘elevated’ to form enough clearance above the car park entrance at Clarke St before rejoining the original line at the Edgar St footbridge.

The timetable needs a bit of work to avoid padding / having trains leave 2+ minutes early.

I noticed the other week that there is now pedestrian access from Milton Pde, was hoping this would be the case as it seemed so logical but I don’t remember seeing it on any of the original plans.

I suspect the tram still has big issues further along Burke Rd, towards the shopping strip, which would continue to affect the punctuality.
Getting On/Off the freeway at Bourke Rd is remarkably better.

Good news regarding the PIDs at Gardiner – the platform ones have already been upgraded to these: https://goo.gl/photos/NQ4QckHNgda24xfx5 (feel free to add to the post if you like).

Same hardware as used on the RRL, but a slightly improved software design. Could still do with some tweaks, but I’m inclined to think it’s the best in the country for smaller stations. I certainly like the clear, contrasting white-on-black text, lack of scrolling, and clean layout – all things which put it above Sydney’s design in my view.

Daniel, did you see the pathetic ‘bike lane/shared path’ on Burke Road between King st and Malvern rd? It’s really quite fascinating they even bothered. It’s worse than what VicRoads have as their bike path that merely wraps around their head office in Kew.

Are stats available for how many people make the interchange?

The original plans were for the combined tram stop to go on the south side of the intersection, including two small track termini on either side which would allow the splitting of Route 72 as per plans a few years ago. Obviously something changed. Could it possibly be that the incline on the south side of the intersection was too great to make the platform accessible?

About time they update the PIDs to something more modern. Up in Sydney every station has these sort of displays, yet in Melbourne there are still stations without even the basic LED PIDs. Even the stations in Sydney by and large are of a far higher standard than Melbourne’s. You realise how bad Melbourne’s system is when you come back from Sydney.

I am glad they didn’t split up the line that would have severed the connection between Camberwell and Malvern/Armadale.

In regards to traffic congestion it probably hasn’t made a big difference as traffic congestion has moved up towards the corner of Burke Rd and Toorak Rd, plus the induced demand from the crossing being removed has increased traffic as well although getting on to the Monash is much better than before.

The train would only have a small benefit in speed because the train needs to stop at the station anyway. In the long run I am for the crossings being removed as it will allow a long term increase in train services without causing gridlock on the roads.

Can’t believe that any modern PT ‘upgrade’ includes making connecting services worse. Wait, I can, they did it at the #8 Toorak terminus too. Presumably VicRoads won out on road space allocation.

@David Stosser, it’d be great to compare before/after numbers. Since the tram speed didn’t increase, would be interesting to see if numbers dropped with the worsened connection. A real opportunity to integrate the modes was missed.

The carpark has stayed quiet after reopening, suggesting demand for carparking IS flexible and can shift, and yet, when an opportunity came to encourage a switch to using tram connections, there’s… we’d prefer you didn’t?

And the same as several other level crossing removals, despite platforms continuing right up to the road over, entrances on both sides of the (quite wide at that point) Burke Rd weren’t provided, so there’s no real benefit for pedestrians on the western side of the station, either.

[…] 72 until January included the Gardiner level crossing, since grade separated. As noted in a previous blog post, this has not resulted in a huge uplift in punctuality, but that route suffers severe traffic […]