The Nicholas Building in Swanston Street. Glorious, and fortunately (unlike some of its neighbours) not to be demolished for the metro rail tunnel. 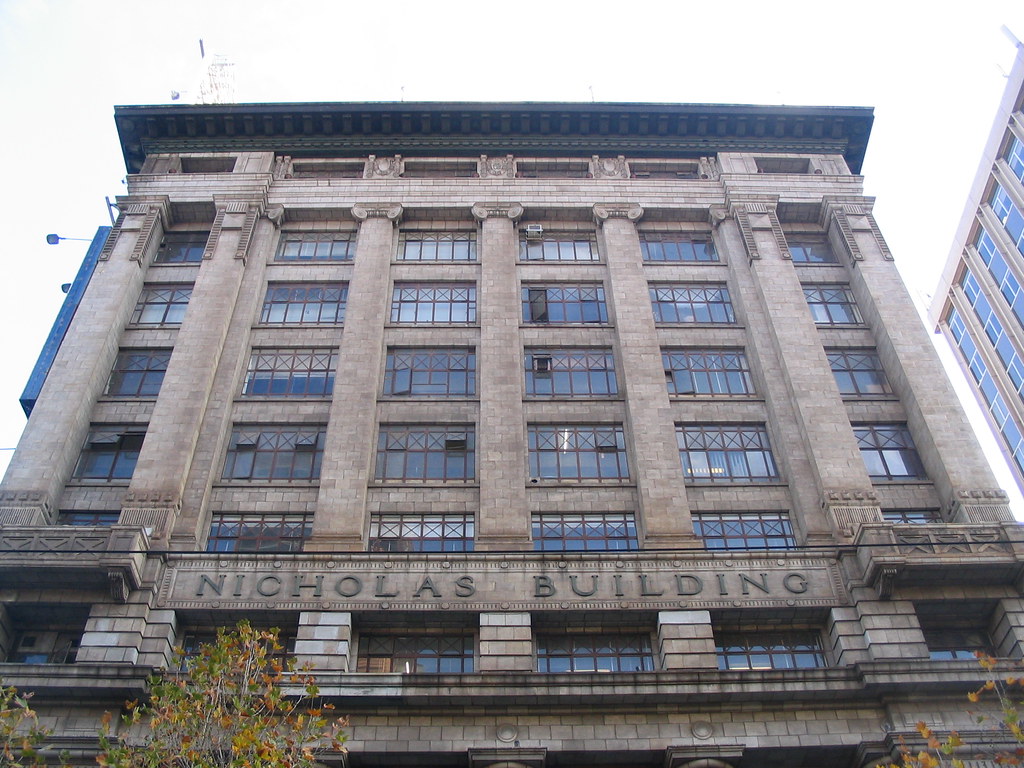 The T&G building on Collins Street. Apparently T&G stood for Temperance And General, an insurance company that amalgamated with National Mutual in 1983. I seem to recall a similar (but smaller) T&G building in Hobart; presumably they are all over Australia. 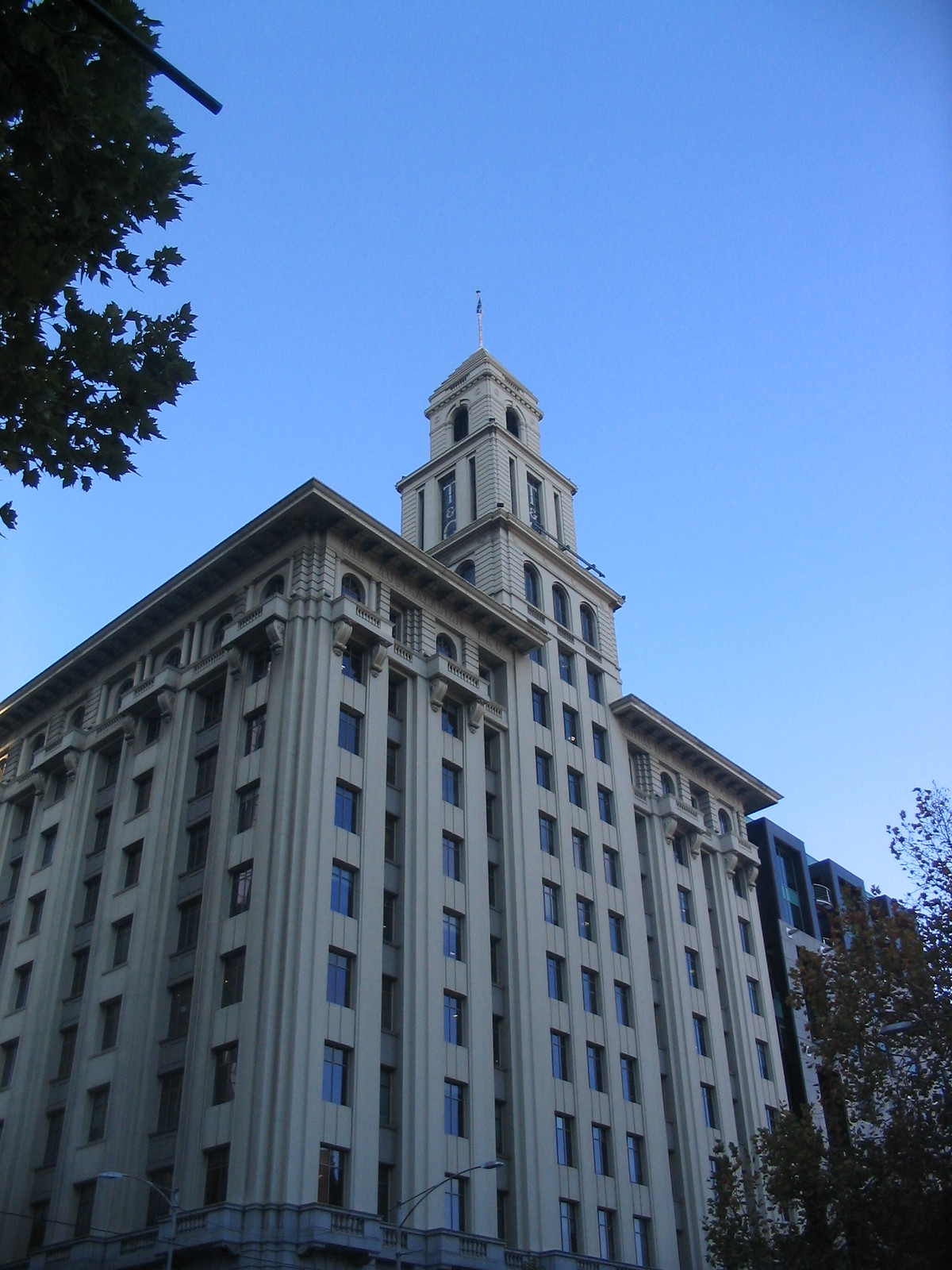 Flinders Lane, with Ross House (home to the PTUA and numerous other community organisations) in the foreground. These are also safe from the rail tunnel. 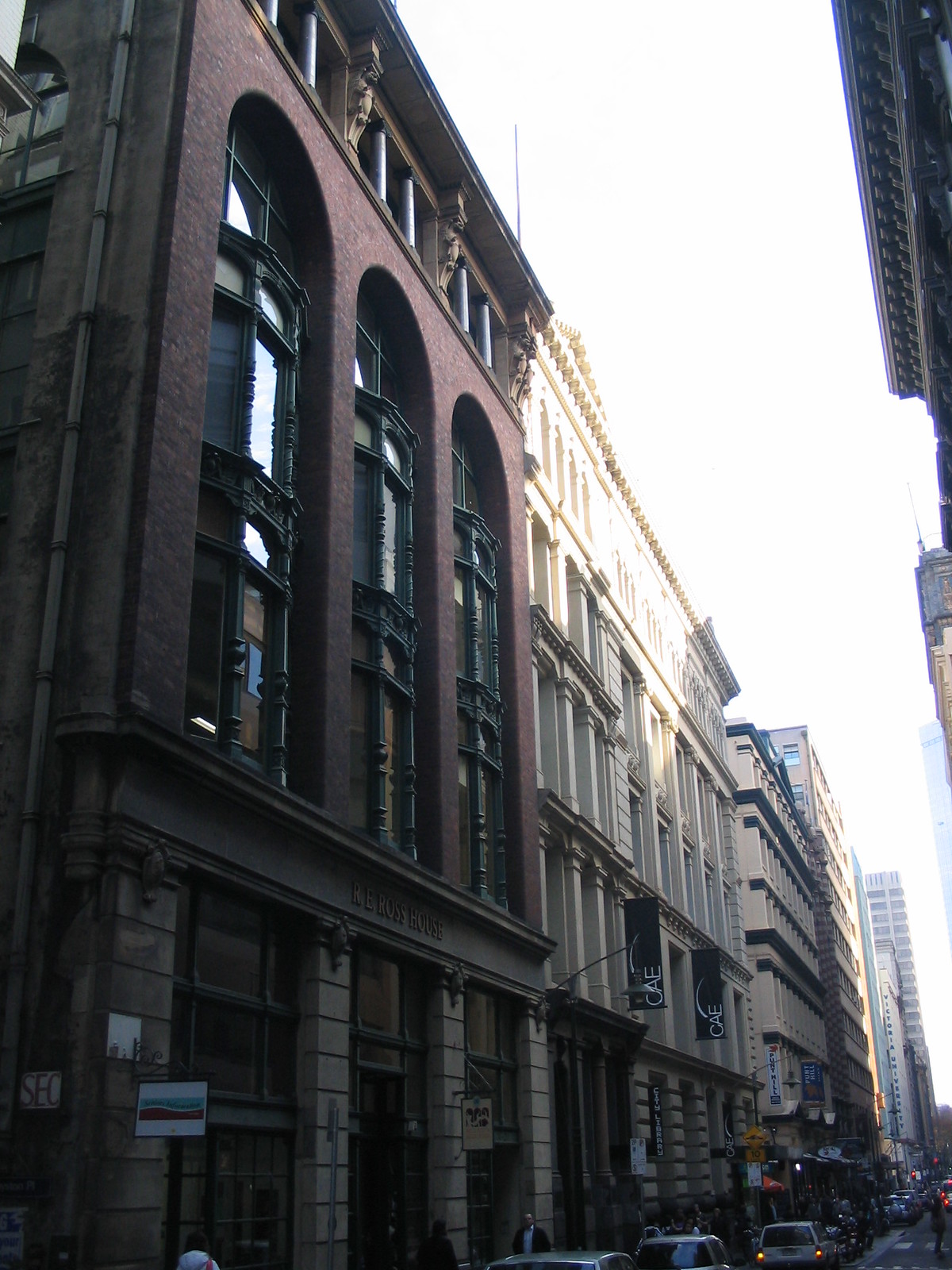 Richmond station. A Connex train passes; with one of the new (introduced for the Commonwealth Games) plastic rubbish bins in the foreground. 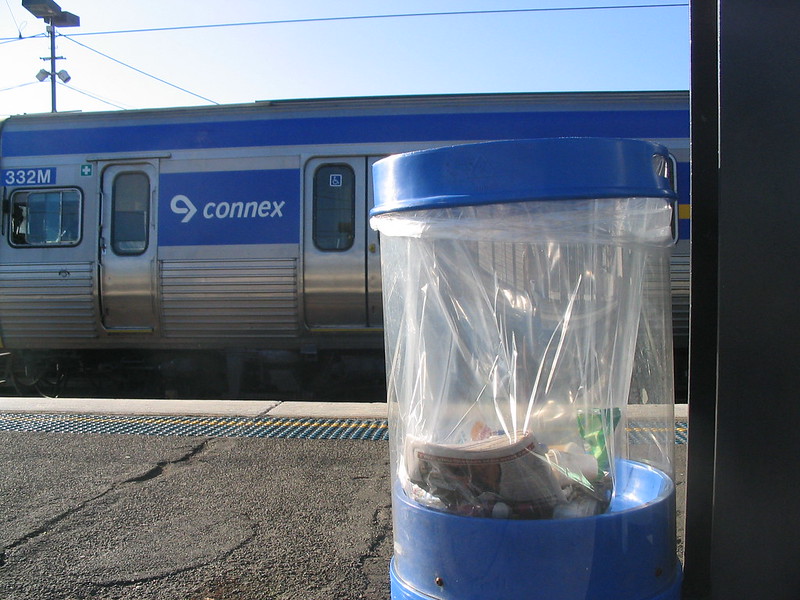 South Yarra station. I must have been trying to highlight the different bins in use. Since replaced (at every station) with plastic wheely bins. 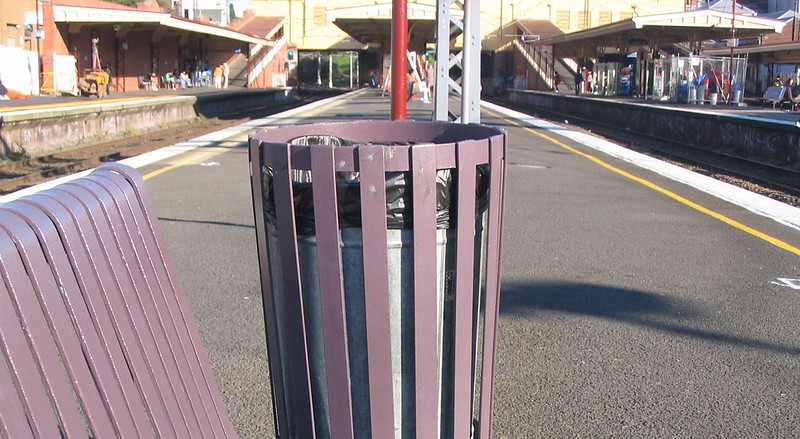 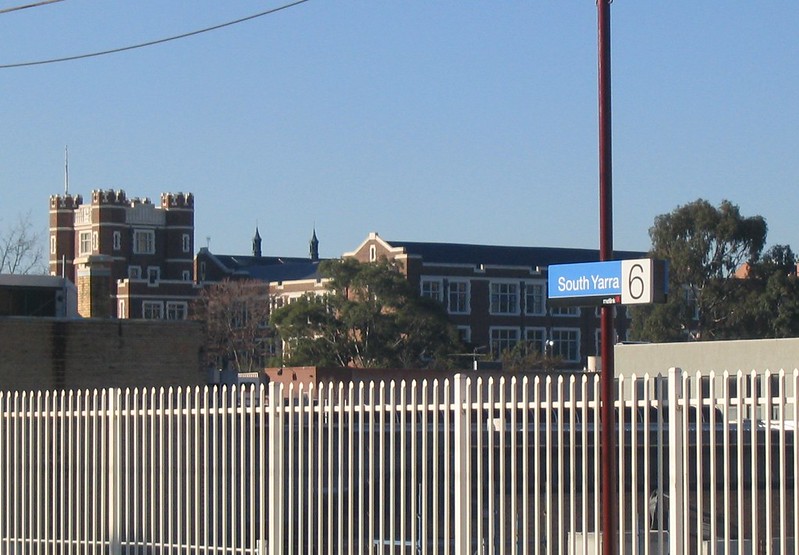 Here’s how the area looks as of 2014 (pic from Google Streetview). I don’t mind that, though I’m less pleased that behind the school is a glass metal monolith, spoiling the vista (below). 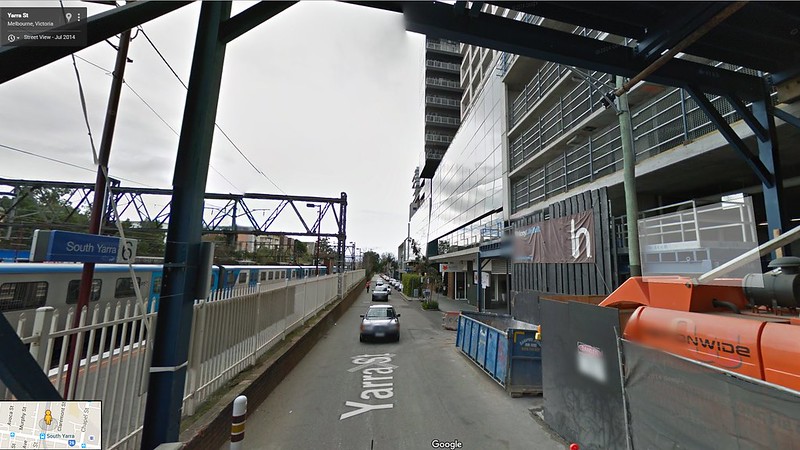 Flat Stanley at Flinders Street Station. This was for a friend in the USA. For more of Flat Stanley’s visit to Melbourne, check this post. 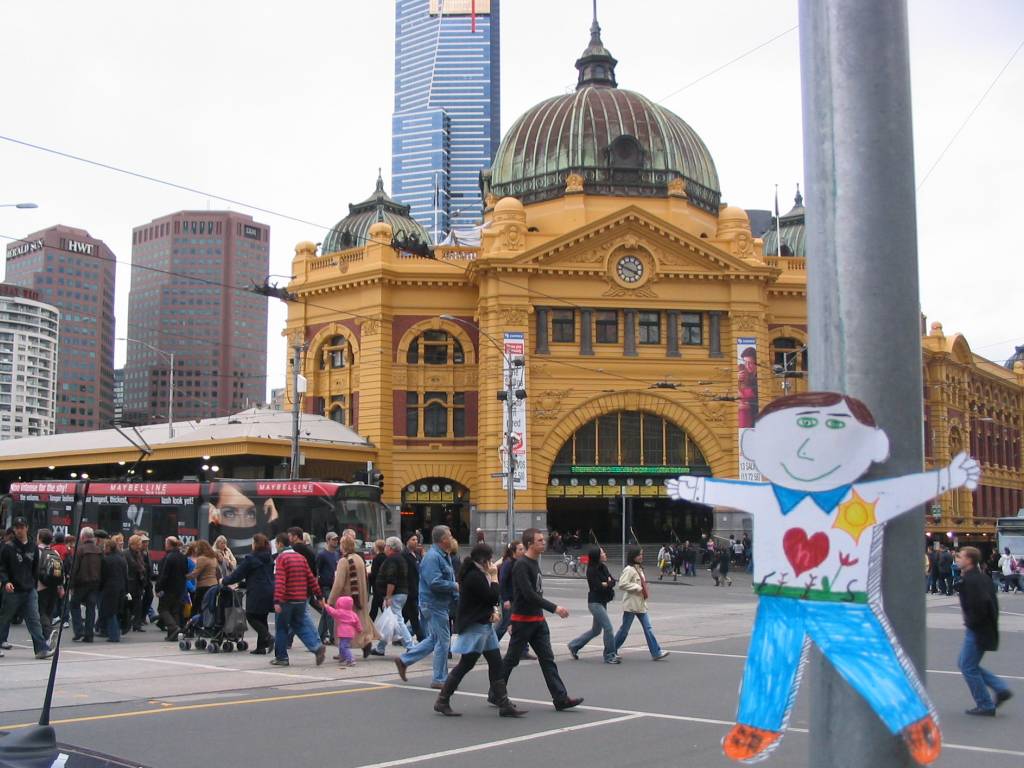 In the ten years that I lived in Darling St the area changed to be almost unrecognisable from when I first moved in (2004) and it’s a blast from the past to see these pics as a reminder of how it was when I was catching the train from Sth Yarra every day (I even remember the bins!) The only thing that hasn’t changed much is the station itself, except of course for the greasy food outlet that was demolished to make some room behind the barriers which are still woefully inadequate today. Some of the highrises now look pretty amazing but the accompanying traffic, parking (or lack thereof) and increase in the number of people out and about made it an exercise in logistics just to get to the supermarket by the time I moved out. I thought I was moving to sleepy Carnegie at the time but little did I know what was to come!

To be honest, I like the monolith a lot, and even as a small child in the 1960s going past it on the red rattlers I thought the building was too low for the site. I like it close up as well. Of course I never liked South Yarra, and have no emotional investment in the area.

I can’t help feeling all that residential development around South Yarra Station has been a mistake, and the area would have been better as a commuter destination rather than as a source. No train (except in the distant future, the Geelongs) starts at South Yarra, yet space will have to be found for passengers departing there in the morning peak. I suppose it has served as a template for other transport oriented developments though. Just along the Frankston line, I can think of ones recently built or under construction at Moorabbin, Cheltenham, Highett and Mentone. In that sense, South Yarra has been a great success.