If ever you want to see what the priorities really are, look at the resources they’re given.

At this tram stop — Bourke/Spencer Street westbound — the few in cars have clearly been prioritised over the many in trams. While passengers are squashed into a narrow pathway, motor vehicles (if any turn up) are given two spacious lanes. 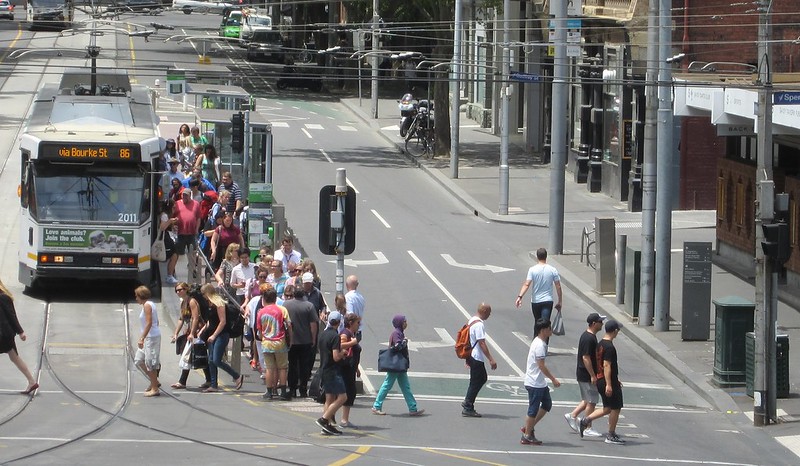 Who on earth designed this tram stop? And who approved the design?

It opened in 2007, with Yarra Trams (under its previous operating company) saying at the time:

The new platform stops comply with Disability Discrimination Act requirements and include ramps for wheelchair and pram access, as well as passenger shelters, lighting and real-time tram information.

“We want to ensure that reliable, accessible and sustainable transport options are available across Melbourne”

That said I expect it would have been a collaboration between the tram company, the Department, VicRoads and the City of Melbourne. 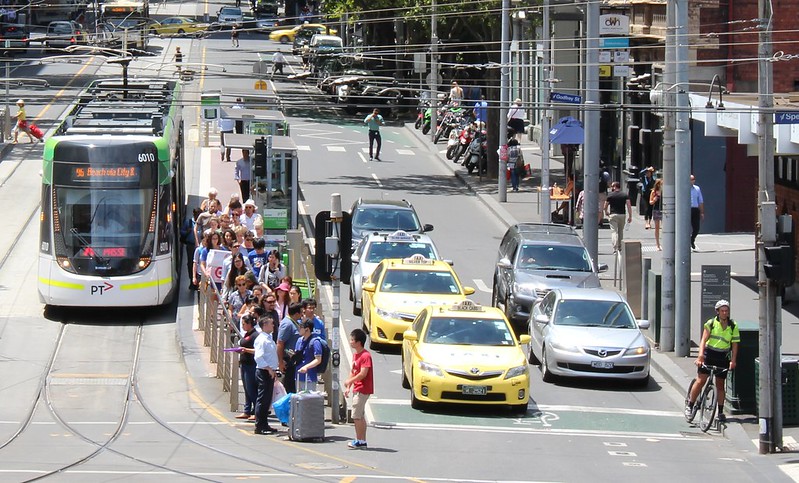 Fast forward to 2016, and it’s clear the stop isn’t fit for purpose. Yet they knew it would be a busy stop, because it’s been designed to be two full tram lengths wide. (Connect two of Melbourne’s busiest tram lines with a huge busy station serving almost every suburban line, all the regional trains and coaches, and the Skybus — of course it was going to be busy!)

The width of the platform isn’t ideal, but the real problem is the main exit ramp, towards Southern Cross station, as well as the sequencing of the traffic lights.

As you can see from the video below, crowds coming off trams get caught on the ramp. This clears so slowly that often not all the people can exit during the green phase of the traffic lights.

Once people have crossed the road to leave the stop, the majority of them have to wait for another green phase to cross Spencer Street to enter the station.

If you sit through the entire clip (yes it’s a bit monotonous; that’s what alighting tram passengers get every day) you’ll see numerous people are tempted by the design to jaywalk.

Or jump to 3:30, where you’ll see a large number of people walk across against the light. A few seconds later you’ll see some people try to cross parallel with the westbound green phase, risking being hit by turning cars.

It’s not the only super stop with these types of problems. But clearly in this case design is flawed.

A wider platform (at the expense of a car lane) would help. So would better traffic light sequencing — perhaps a pedestrian scramble so people get a green sequence to cross directly into the station.

With the trams getting ever busier, it can’t stay the way it is.

21 replies on “Bourke/Spencer tram stop not fit for purpose”

A scramble probably wouldn’t be ideal with the turning sequences for trams.

What I think would be a good idea would be to move the stop further up the street, make it an island platform so it could be double or triple width, then extend the Southern Cross concourse (or a section of it) to the platforms. It’s a dream, but we need better integration of public transport.

Go there when it’s raining and it’s even worse. A giant puddle forms just where all the people are waiting.

A second exit from the stop, perhaps 20 metres back up Bourke St, with a zebra crossing, might also help?

@Jason, that’d actually be the third exit. There’s already one at the eastern end of the stop with a zebra crossing. It might work, but in the past Yarra Trams has been very resistant to the idea of extra exits along the platform.

dude thank you. i’ve been putting up with this shit stop for years without even questioning why it is the way it is. i’ve even been tempted to climb the barrier between the stop and the tracks before.

A temporary fix might involve introducing a new light sequence with a tram phase (t) followed by a pedestrian scramble (p) phase between each Spencer St car movement phase and Bourke St car movement phase (c1 & c2)? [Hence: t-p-c1-t-p-c2 …] This would cut dwell time for trams as they could proceed on any t-phase, would also allow the elimination of individual car turn arrow phases, and hence could be close to time-neutral for the sequence. It would also make sense if there was to be an attempt to realign the road pavement as you have rightly suggested. Any thoughts?

Same applies at the Flinders St / St Kilda road tram stop. Hopelessly undersized for the numbers it serves; any “per sq metre” of space efficiency analysis would say take a car lane to expand the platforms.

Do you have any thoughts generally on the use of these platforms instead of island stops? These platforms seem to waste so much space.

“Who on earth designed this tram stop?” doesn’t just apply to the stop at Bourke/Spencer Streets. Many tram stops across the system aren’t user-friendly.

I’m a patient at the Royal Melbourne Hospital and my particular gripe is with the so-called tram “Superstop” on the corner of Flemington Road and Grattan Street.

The stop is a very busy one with patients, visitors and staff coming and going to the Royal Melbourne Hospital, the Royal Women’s Hospital and, from June this year, Peter Mac. The stop offers little protection for passengers from the wind and rain and has very limited seating. As a result, sick and elderly patients are forced to stand in the rain waiting, sometimes for up to 10 minutes, for a tram.

The Minister for Transport tells me that the stop is compliant with the Disability Standards for Accessible Public Transport. These Standards require a resting point with seating every 60 metres.

Make turns from Bourke St into Spencer St left turn only and add a zebra crossing from the westbound stop to the southern side of Bourke St.

I love what Terry Laidler has said. Pedestrains can be just like Elizabeth and Flinders are now.

We can widen the platform and reduce the road down to one lane.

As said, the road does need to have two lanes with the current light sequence.

Great minds think alike – the tram stop is a joke!

Same problem down the road, at Collins/Spencer. Stupid design, major exit out of Southern Cross and there is a giant pillar in the way leading to the intersection and a narrow tram platform. All 4 corners jam packed all day, with 100+ pedestrians waiting and over 200 during morning and afternoon peak for 3 minutes while the 30 odd cars with single occupants never have to wait…

Really simple solution is just to remove a car lane on either side, expand footpath, expand tramstop, put in cycling lanes. Melbourne needs to learn to stop prioritising cars in the CBD where pedestrians outnumber cars by about 50-1 or more on most intersections.

Best solution: pedestrianise the end of Bourke St adjacent to the tram stop, initially using planter boxes. This removes the need for the vehicle turning cycle from Bourke St, which is already limited to only ~10 cars per cycle because the green from Bourke St coincides with green pedestrian lights crossing Spencer St, which results in the vehicle throughput being limited by pedestrians. This would then allow more pedestrian space for queueing on the eastern side of Spencer St, and simplifies the traffic light sequence.

In the report referred to by Marcus Wong, it is surprising that the consultants didn’t take into account traffic light sequences. Long pedestrian wait times are one of the main causes of the pedestrian build-ups.

[…] Cross Station steps can be seen in the background, as can the old tram stop, now replaced by the totally unsuitable platform stop. The second tram seems to be shunting, heading back […]

Once I was waiting for the green light at this stop to cross the street I was suddenly pushed forward by someone. I stepped back immediately otherwise I might posting this comment from heaven, hell or somewhere else. (:

Here’s another one: Latrobe St where it crosses Elizabeth St. Passengers waiting for a No.12(?) tram towards St Vincent’s Plaza. It’s hopelessly late because it’s caught behind a crowded City Circle tram. CC tram arrives and so slowly disgorges dozens of passengers/tourists who can’t squeeze past to leave the tram stop. No.12 tram pulls up behind CC tram, opens doors but there’s no way people wanting to board it can get past the throng beside the CC tram. CC tram finally closes doors and lumbers off. No.12 tram closes doors and follows it. Would-be passengers wave at the driver who just shrugs and keeps going. He didn’t even stop at the tram stop proper and gave no chance for anyone to board. Just hopeless and a common occurrence for second or third trams in a row at tram stops to fail to stop at the front.

@Graeme, yes there are a number of older “safety zone” stops which are also overcrowded. Hopefully they will be replaced by platform stops soon which will be better designed than this one.

[…] might be hard to believe, but the old tram stop at Spencer and Bourke Streets was even worse than the one that’s there now. The exit was constricted (though only with barriers on one side, so at least people could spread […]

[…] Bourke/Spencer is probably the top candidate elsewhere in the CBD. Swanston/Latrobe could also work well. […]