We survived! Ten days of bustitution is over… well, almost.

Just to be clear — because some of the information is either vague, misleading or missing:

That feeling you get when you finish roadworks ahead of time… #CentreRd #Bentleigh reopens 17 hrs early! @Vicroads pic.twitter.com/VwIX8qynex

This ten days was the second major shut for the project. The third (and longest) begins in late June, for five weeks. Originally it was scheduled for January, but was brought forward in part because of work proceeding on other parts of the network.

During road and rail shut downs, naturally some areas need to be fenced-off for safety. In Mckinnon, to my surprise, some sections of footpath immediately to the east of the station were completely closed off, on both sides of the street. At least some of the properties there appear to be vacant, but I didn’t think it was all of them. 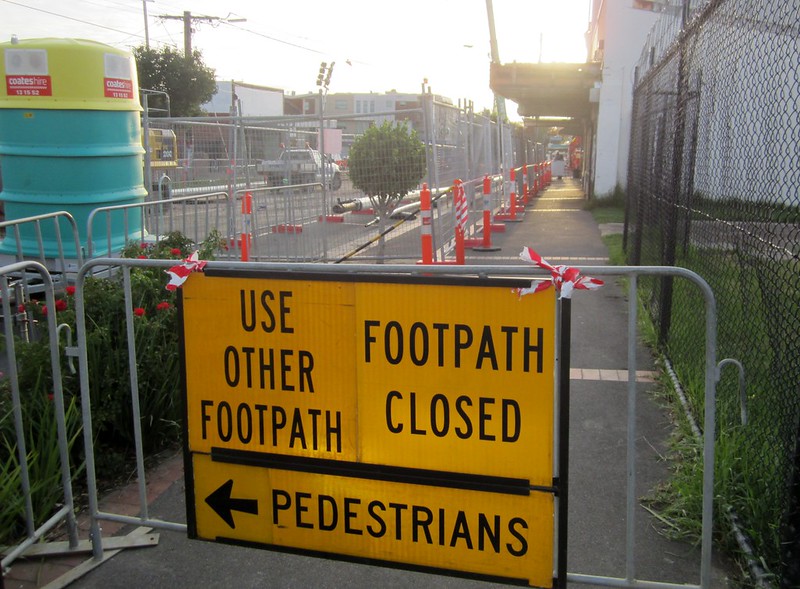 In Bentleigh, this real estate agent on the western side of the station was basically isolated. You can navigate a way into their office, but any passing trade would have fallen to zero. 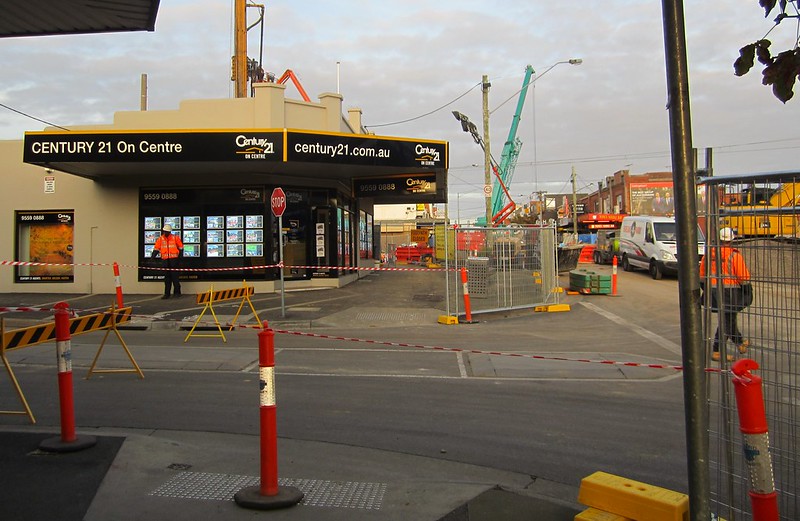 Some businesses are at a dead end, but are doing okay – for instance at Bentleigh on the SE side, cafes like Noisette and Mama G’s seemed to have a reasonable amount of trade, in part thanks to construction workers on the project. But some local traders have said that — despite considerable efforts to promote them being open — they are at risk from going under due to lack of revenue during closures. Mad Flowers in Mckinnon claimed it was threatening their viability, and clearly the Paint Spot in Bentleigh is feeling the impact: 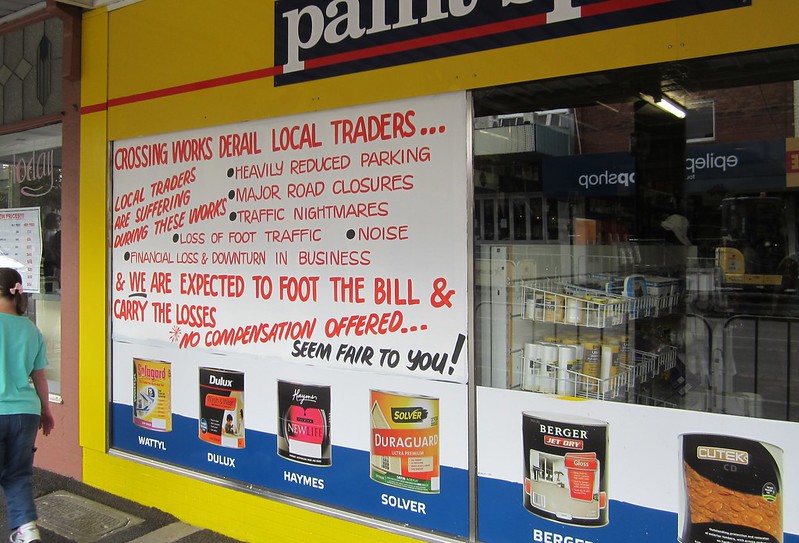 Given these are both reasonably busy shopping streets, this seems a little more serious than the complaints from traders when the Gardiner crossing was being removed — Burke Road has long been a traffic sewer, with few shoppers around.

Bus routes 701 and 703 returned to their normal routes early. Potentially confusing? Not really — the alterations meant they missed some stops. It’s no big deal if they now serve them again. 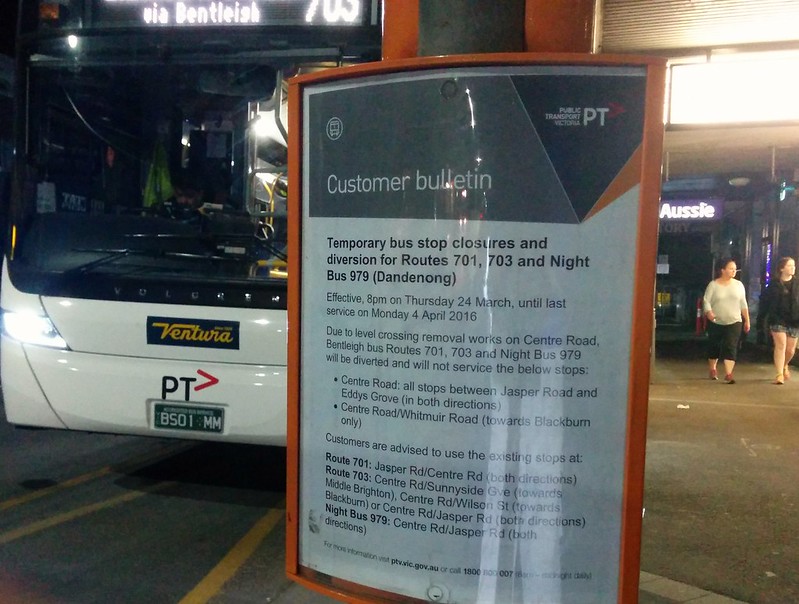 For this period, these three routes plus Night Bus 979 all diverted around the works zone. From what I’ve been told, none were able to pick up or drop off passengers in the diversion section — even where there are existing bus stops. This meant for instance that bus 626 didn’t serve any stops on Mckinnon Road between Jasper Road and Thomas Street, a distance of 1.6 km. For a local route serving, in part, people with limited mobility, that’s a long way to walk for a bus.

The replacement buses have gone about as well as can be expected. With my PTUA hat on, I’ve given a bunch of feedback to the organisers (including issues from further down the line than me), but clearly significant resources went into bus operations.

There were up to five staff at replacement stops such as Bentleigh, and far more at interchanges such as Caulfield. And around 80-100 buses were operating every peak. By contrast, Melbourne’s busiest tram route 96, which is about twice as long, operates with about 20 trams in peak. 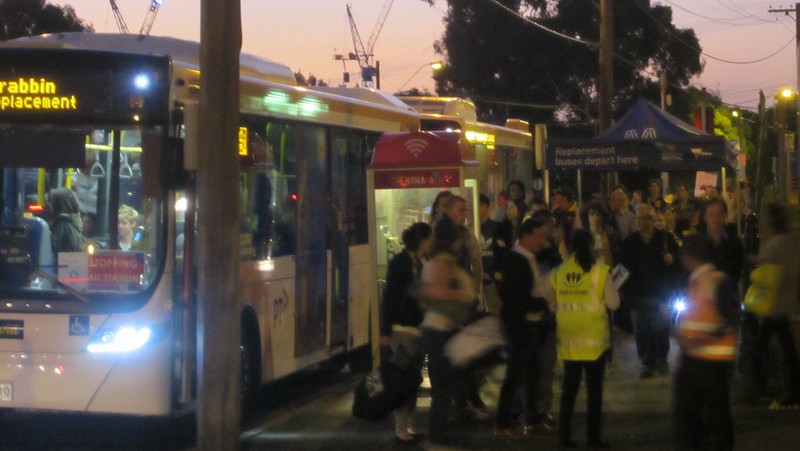 Rather than use the buses, some people migrated to other lines (including me, on one day). Some drove to Caulfield to use the paid parking ($4/day) there, delaying buses further.

Overall it wasn’t as slow as in January when North Road was closed, but trip times from Bentleigh to Caulfield (4 stops) were up to 15 minutes longer than by train.

Workable? Just about. But I would think most people were eagerly anticipating the train service getting back to normal. And few would be looking forward to the long five week shut down scheduled for June/July — most of which isn’t during school holidays.

Remembering of course that Ormond and Mckinnon station users are on buses (or seeking alternative routes) for the next four months. 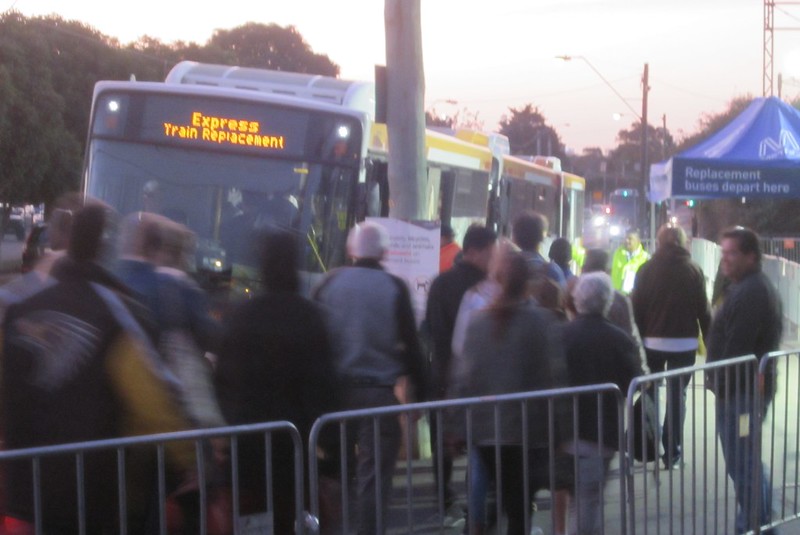 My conclusion from all of this: it’s really really difficult to replace busy train lines with buses, even when well planned, will lots of resources.

Buses as a mode are very good for some things, but there’s a huge difference in capacity compared to trains. You get to the point where there are so many buses flowing through the road system, they’re even delaying each other.

Particularly in an urban environment where a dedicated right of way and priority can’t be provided, and longer articulated buses aren’t available, they just can’t cope brilliantly with Frankston line-sized crowds.

Now consider this: the Dandenong line is about twice as busy.

The issues for traders and for passengers are a reminder than anything that can be done to minimise rail and road closures is a big help to the community.

No wonder there is a push for “skyrail” on the Dandenong line. With far fewer rail shut downs needed, all the benefits of grade separation can be achieved, while markedly reducing impacts during construction.

12 replies on “Impact from road and rail shut downs”

Good post… but I think the bulk of the car traffic to Caulfield is “drop-offs” (&pick-ups). No one is going to leave their dearest at a bustitution stop, when you can drop them at a station (which used to be 5-10 minutes away).
This traffic will be a lot worse in the winter shutdown due to the abundance of school kids & inclement weather.

Patterson / Glenhuntly being omitted from the bustitutes is ridiculous. Journey planner suggests that to go from Ormond to Glenhuntly (1 stop), you should get a bus to Caulfield and then a train back to Glenhuntly.

Re McKinnon shops. On the east side of the line are two dental business, a hairdresser, and one other business that escapes me. All were behind the barriers.

On the west side of the line there is a cafe. I’ve been told (shopkeeper’s gossip) that their power was cut off during the works. They were offered diesel generators but no compensation. However, they declined and closed the cafe for the duration. They are open again now.

I’ve also been told that business today, with McKinnon Rd open, has not returned to the usual levels. The pessimistic view was that it wouldn’t return to normal until the station was reopened in August.

Any more info on the stormwater rerouteing around Bentleigh? The Elster Creek runs under Bentleigh station, flooding from it was a major reason for the closure of the pedestrian subway.

@Chris, there’s some pics in my previous post showing the stormwater works. I don’t have much more info at the moment other than that they seem to be acutely aware of water flow issues in the area, and they’ve taken it into account.

Your point about the massive capacity difference between trains and buses is a good one. Ten years ago it would have been easier to use substitute buses in case of unplanned train disruption. Now with much higher passenger numbers it is much more difficult to find sufficient substitute buses at short notice, yet the thinking of 10 years ago seems to persist. There needs to be much better contingency planning (as a contracted output from Metro) in case of disruption, such as bus bridges between the radial train lines, more crossovers rather than straight-railing, and wrong-road running to pass disabled trains or other incidents. We pay for fire and other emergency services, and all commercial buildings occupiers are are required to rehearse their emergency evacuation plans at least once a year.. Is there any possibility of this joining the long list of points on PTUA’s lobbying list ?

[…] replacement buses run every 5 minutes in peak times, and every 10 minutes throughout the […]

[…] My station is closed for 3 months to remove the level crossing, and the trains will be interrupted for five weeks straight. Nuff […]

Someone in the government should live on East Boundary Rd and endure the multi load trucks that barrel down the road 24 hours! We cannot sleep with the constant noise of trucks during the night. They need to stop these trucks during the night or reroute to alternate roads on every second night so that we can at least get a decent nights sleep occasionally. One day I was sitting at the East Boundary Rd. / South Rd corner traffic lights and counted 28 trucks going in all directions during a minute duration. It is unbearable!

[…] trucks are having a noise impact along the routes to […]

Ive read that some people are insensed that business owners want compensation, saying we’ll all be better off when stations are complete and business has already been offered packages.
After 3 years of putting every cent back into building my business along came the LRCP with its rail/road closures, tradies parking all day in every available park, noise/ dust ruining stock. After 4 months running at a loss I was sent broke, permanently closing my shop Mad Flowers. Compensation asked for wasnt for our total losses, shops just wanted enough money to pay staff, rent and feed our families. Instead we got……….

: offered ph number for lifeline and beyond blue
: 3 free mentoring sessions with volunteer mentors
: a mention on the LCRP website to shop local