The second big (longer than a weekend) shutdown for this project has commenced, so where are we at? 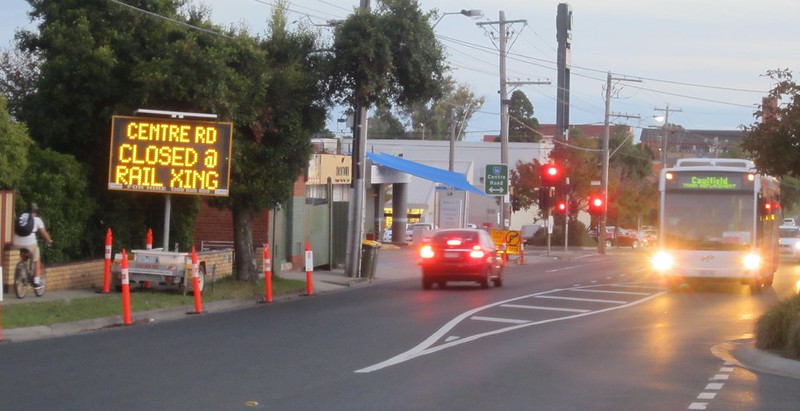 Ormond and Mckinnon station have now closed until they are rebuilt under the roads, so buses will continue running for those passengers, though many may find it quicker to walk to Bentleigh or Glenhuntly.

By Saturday morning, they’d removed the westernmost of the three tracks. 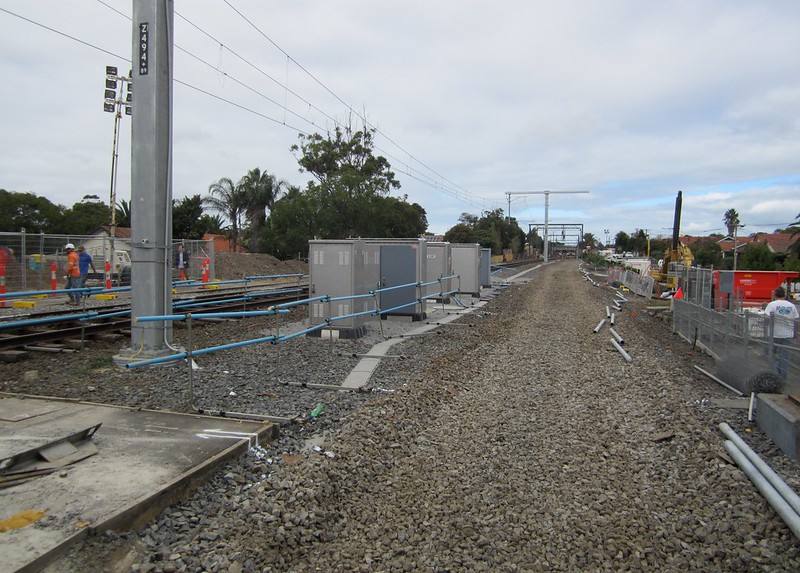 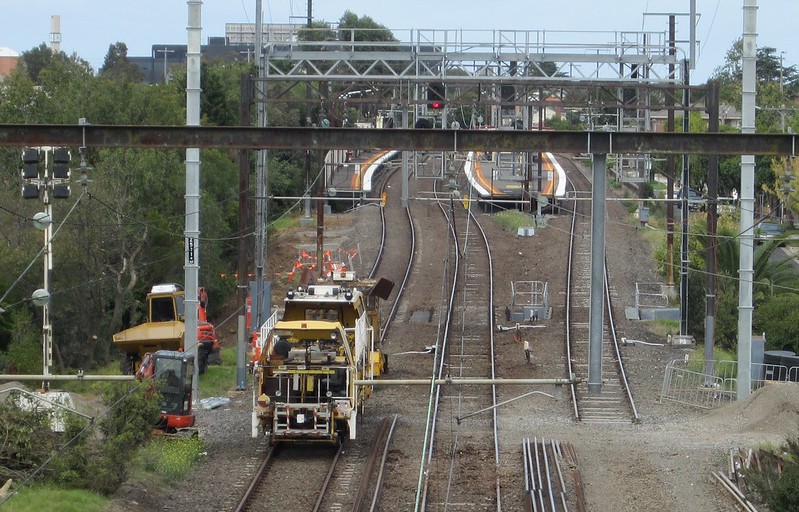 The Centre Road level crossing was awash with construction workers and equipment, busy constructing the new bridge. Later on during the June/July shutdown, they’ll tunnel underneath it. 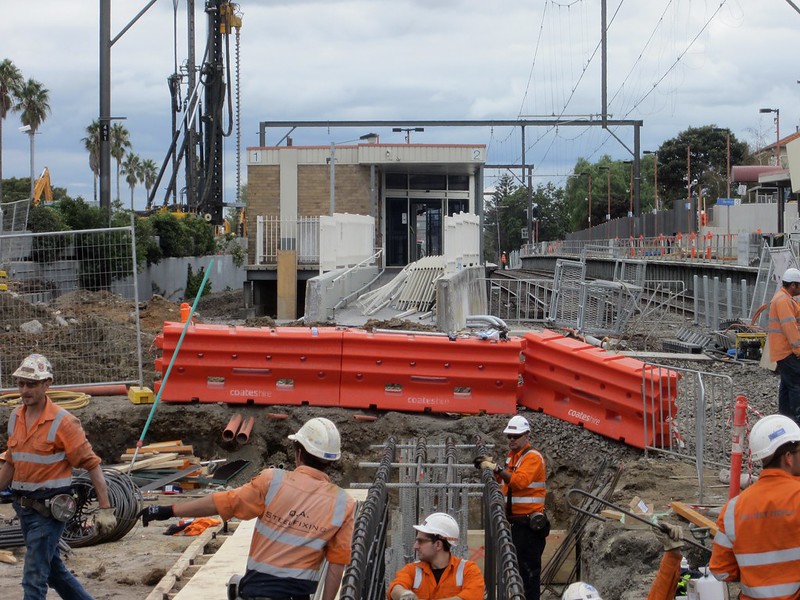 Some video of works on Saturday at lunchtime, with bonus giant Easter bunny!

More trees are being removed along the rail corridor. Mostly it’s only a few palm trees that are left. The other palm trees have been moved into storage until the project is complete, but most of the other trees won’t be back. 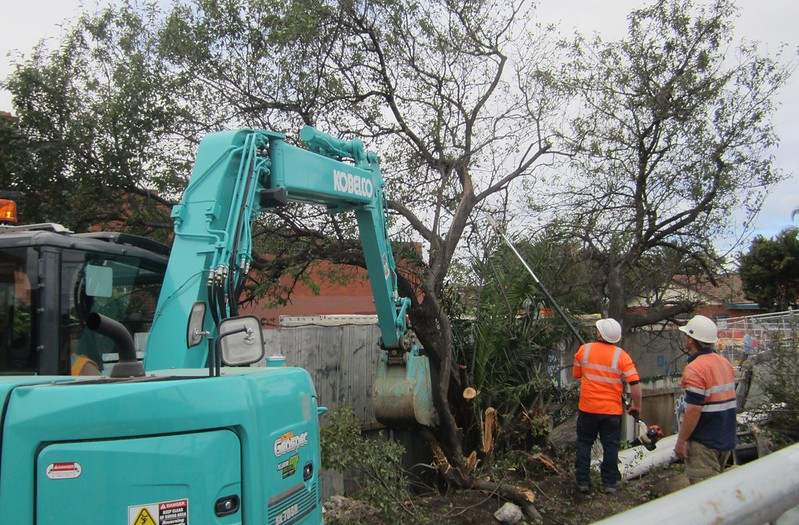 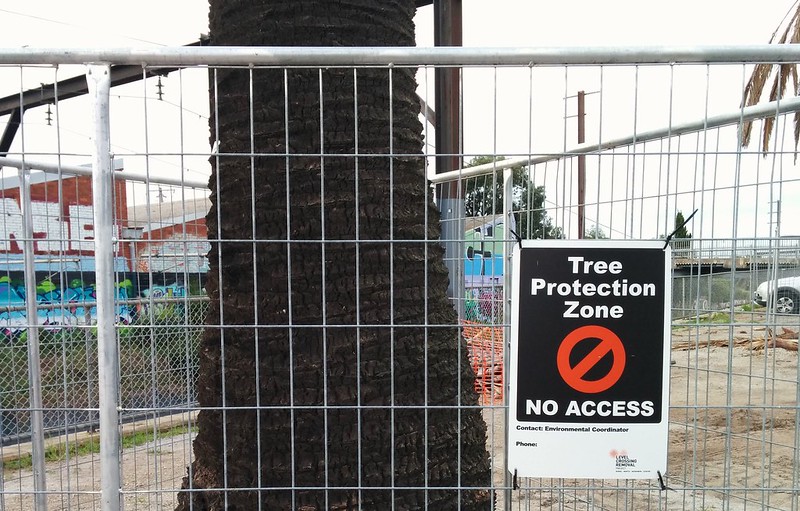 Nearby house construction looks a bit mickey-mouse compared to the grade separation works. I suppose it might be a $10m project versus one 10-20 times that big. 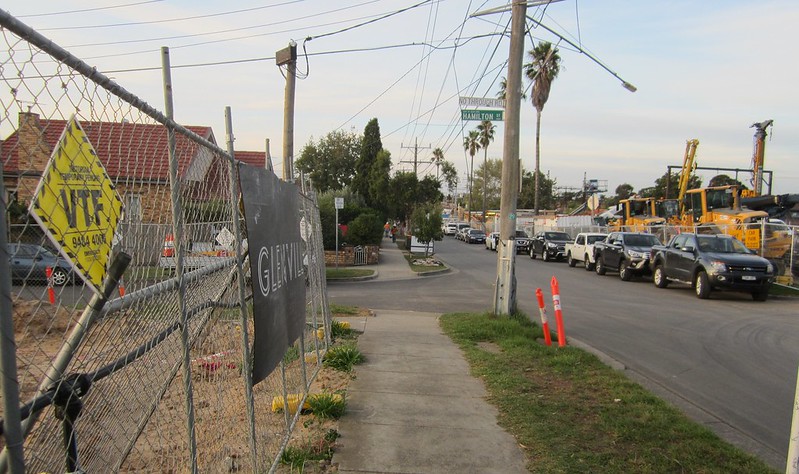 Pedestrian access is available across the tracks. The diversion route lets you see things you don’t normally get a good look at, for instance the appalling state of some of the wooden sleepers. Thankfully this particular section will be removed as part of the grade separation. 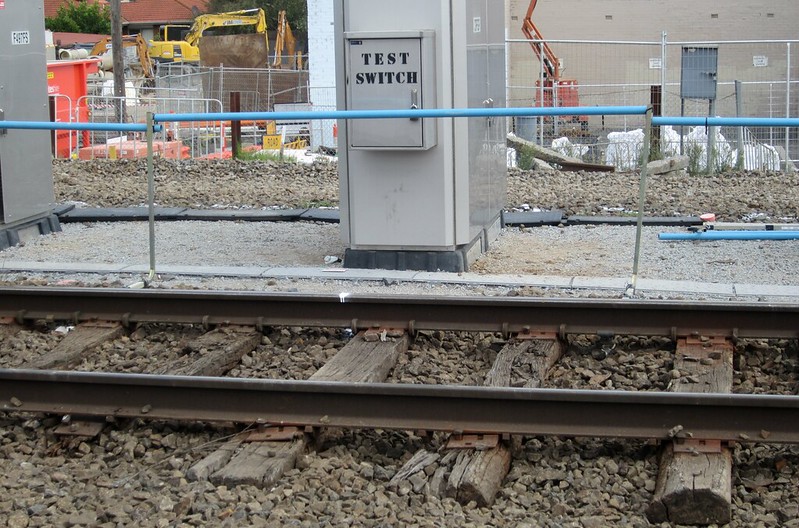 Despite buses being diverted around the area, the Smartbus sign was happily claiming the bus would be showing up soon. 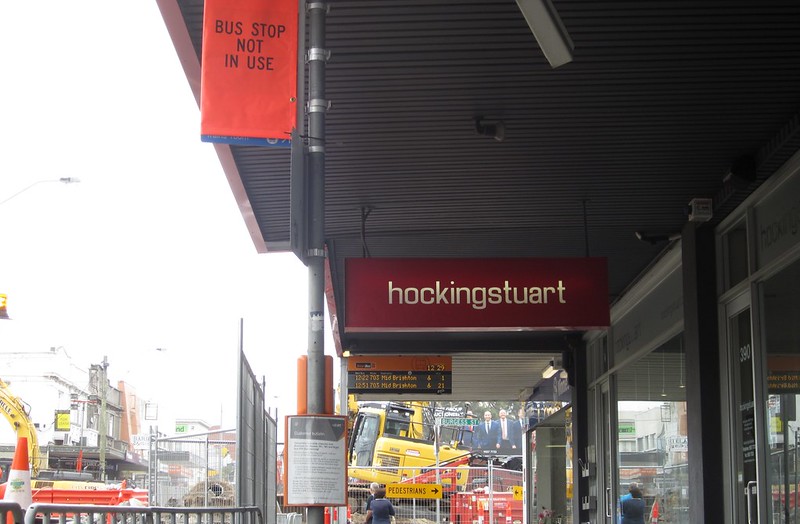 By Sunday afternoon, some of the concrete for the new bridge deck had been poured. More to come, I expect. 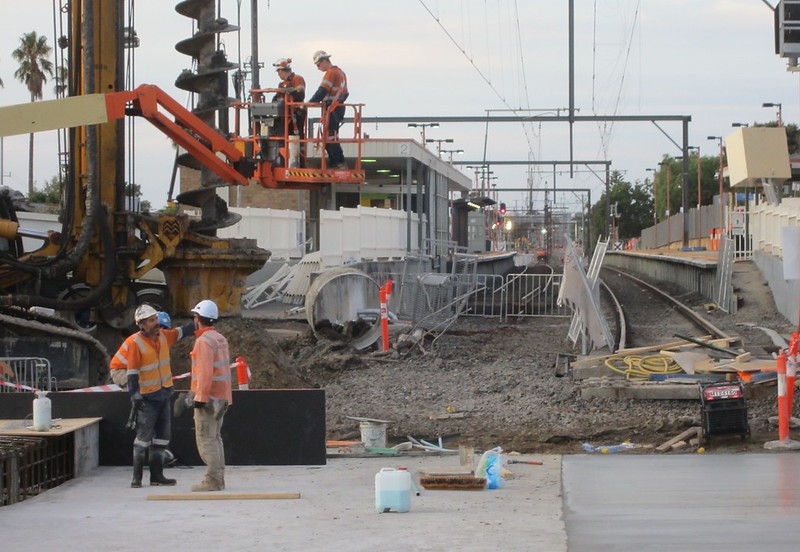 Looking south towards Bentleigh from Mckinnon, you can see all the equipment stored for works, and they’ve started building the safety fence to separate the workers from the trains when they return next week. 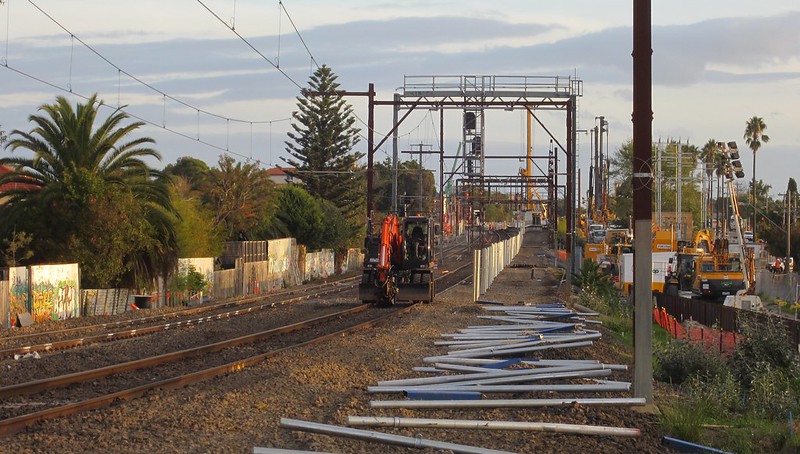 As at Bentleigh, they’ve building the bridge for tunnelling under later. 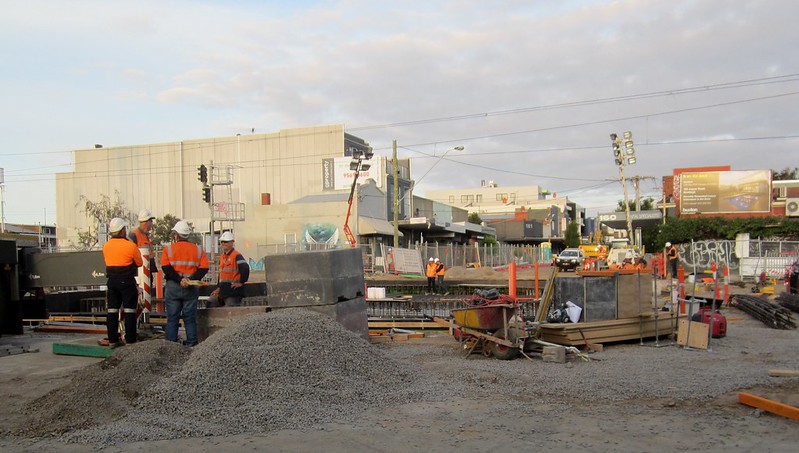 It’s harder to see the works up close at Mckinnon, but they’ve made quick work of removing the station buildings. 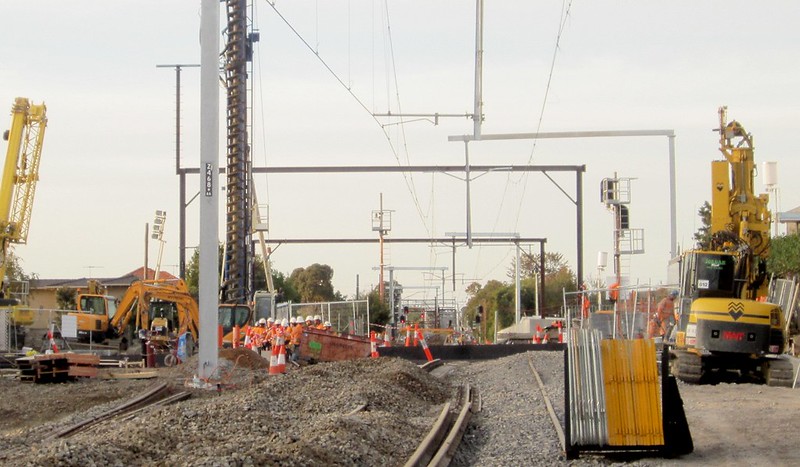 As you go up towards Ormond, part of Cadby Avenue has been closed off during construction, and in fact it’ll be made permanently one way at the northern end to accommodate the extra station entrance. Again, most of the trackside trees have been removed, and it appears won’t be coming back. (Hopefully at least new ones will be planted.) 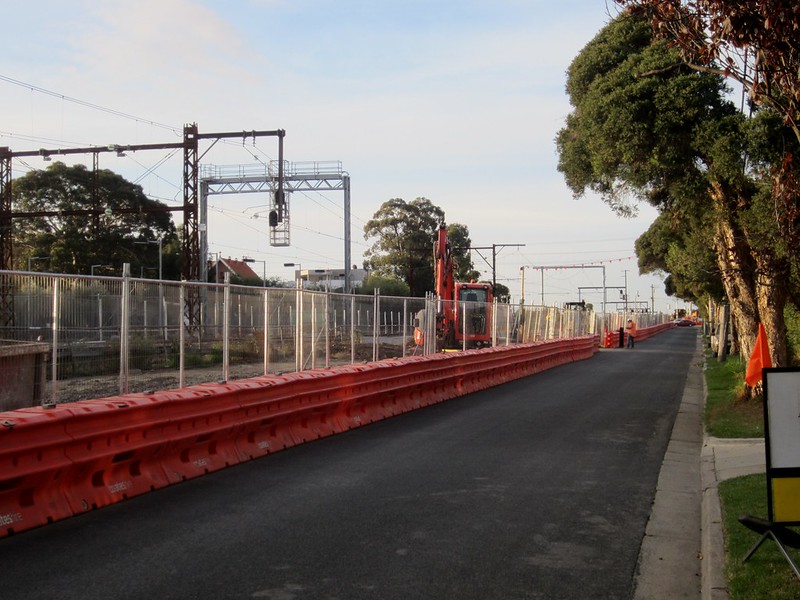 Unlike the other two crossings, the road is open at North Road — they got the bridge for this one built in January. 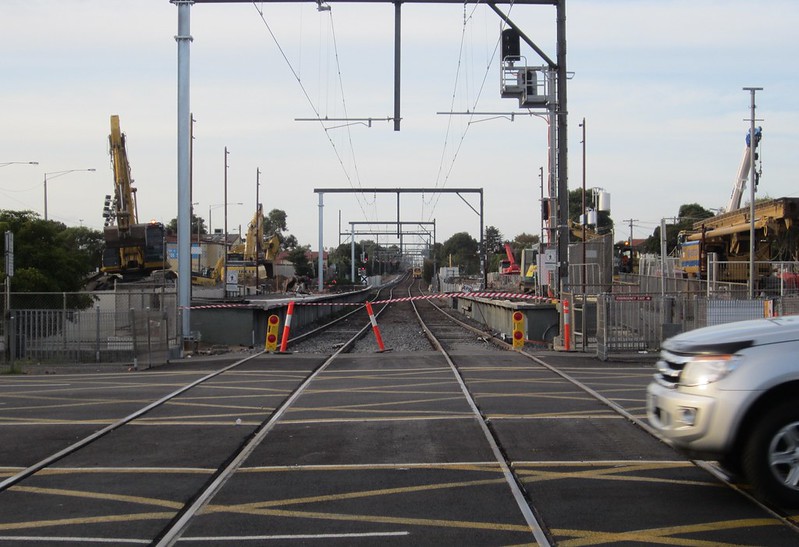 The station buildings here have also been demolished. 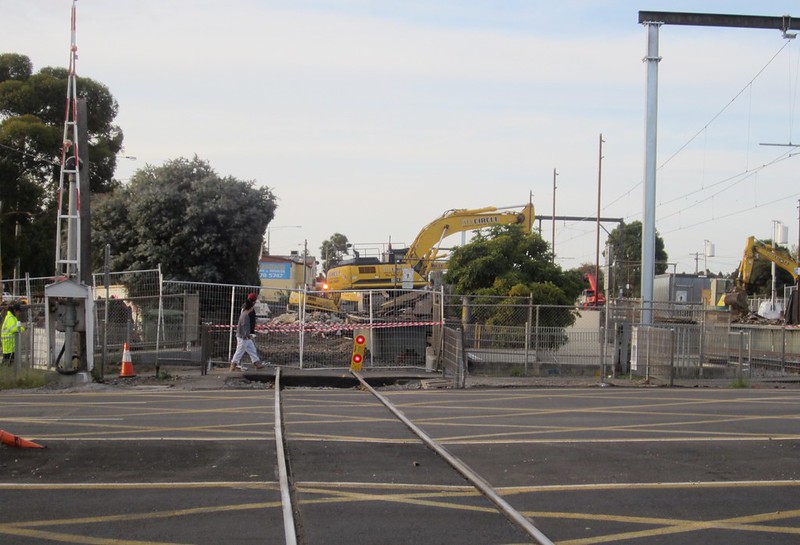 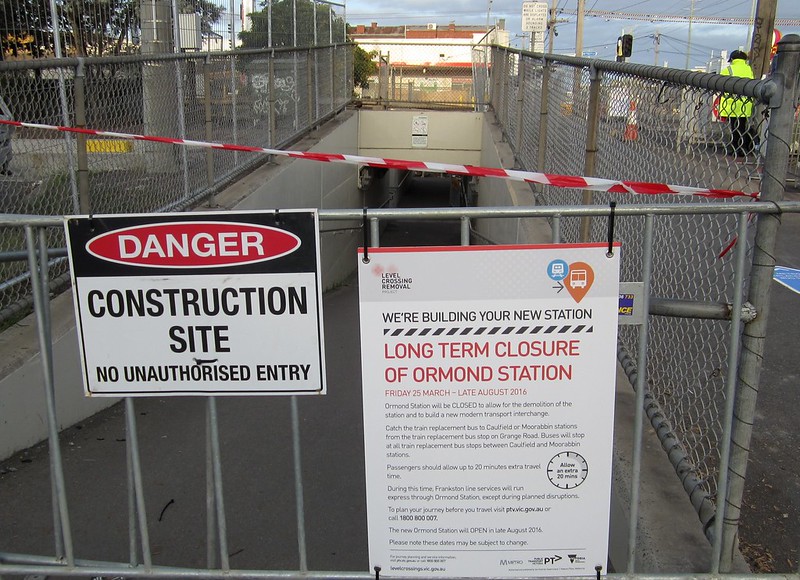 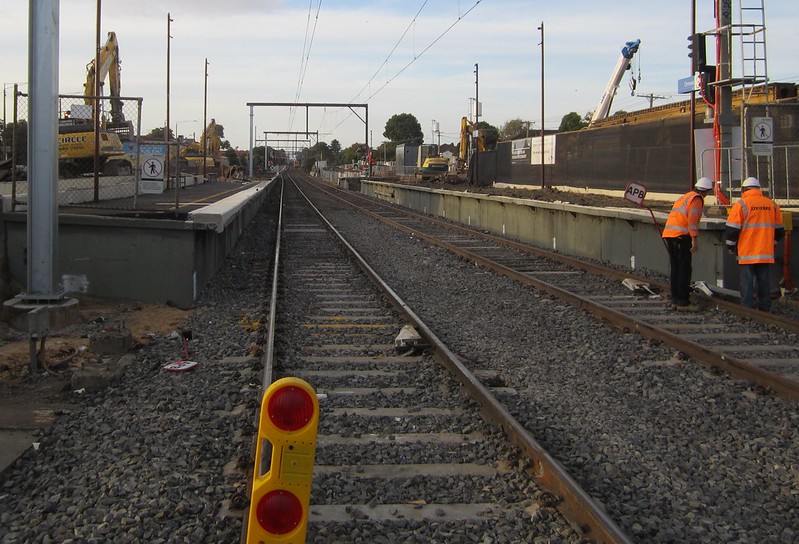 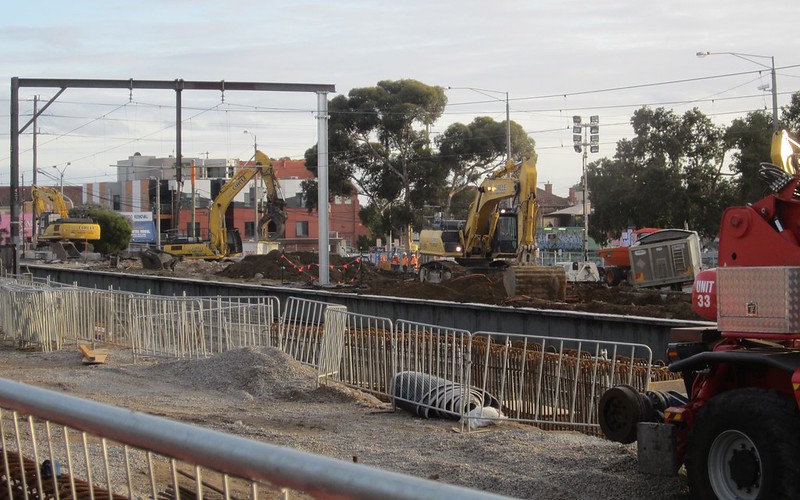 Oh dear, looks like someone foolishly had left their bike chained up on the platform when the station closed. 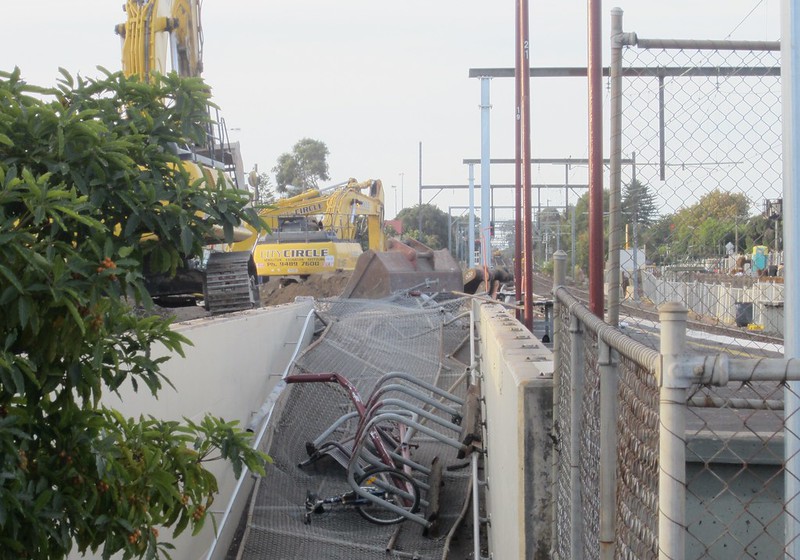 Where to from here?

Some of the information is quite confusing, so here’s a timeline of where things go from here.

(I’ve rounded to the nearest day. For instance if a closure starts late on Friday night, I’ve listed it as starting Saturday.)

Took a good look at the works at Bentleigh today. Hard to believe they’ll get all that work done with the line running again in just a week’s time, but sounds like they already did similar before in Ormond?

You can see from your video why overhead rail is the much cheaper option.

Great update, thanks Daniel. It would be good if the government can boast “on time and on budget” for such major projects.
Not sure of the benefit of a giant Easter bunny – when my kids were small they would have been terrified.

It’s good to see that they approach this with a level of urgency not seen in many other projects.

A terrific summary of what is happening, thank you. It occurred to me that when Gardiner was reconstructed, when it should have been done when the freeway was built, that there was the space next to the line to place a whole new railway line. I guess this not the case at McKinnon, Bentleigh and Ormond, hence a longer closure of the line and more disruption. Two close friends use the FKN line and they have no complaints. One will walk north to Glenhuntly Station and the other will adjust his travel.

@Malcom it really depends on how the overhead rail is done. Potentially if its brown fields like the rail under shown there will still need to be allot of piling, pile cap, pier, crosshead, beam and deck construction done under occupations or track protection all with full overhead isolation. Also what you save in retained earth costs may well be made up for with additional structural concrete elements as you now have a structure many hundreds of meters long versus a short road deck. I suspect the labour is similarly large regardless of the solution and the difference is potentially in all the staging, bustitution, dead running, and driver training that a particular solution may offer etc. It may even be that rail over is more expensive initially but the operating savings such as tractive power, pumping stations (if you can’t free drain) and groundwater contamination treatment (if its near contaminated sources) amongst others could quickly switch the sums site by site.

It might be interesting to study the bus replacement passengers, see how many are ex-train users vs how many are using the service to get along Jasper Road. Could be just the right chance to get a permanent bus route?

It’ll be a joy to do it all over again when Glenhuntly gets grade-separated (assuming it gets trenched as well.)

I think that Glenhuntly (and, by extension, Neerim Road) can only be done as rail over.

to me overhead rail is visually ugly and noisy. I do understand that trenching trains gives passengers nothing to look at but grey walls, but I just think raising rails 2 storeys high will have a negative effect for more people living close to the rail line as apposed to those who just have their fences backing onto it. The extra space below is a good thing but my concern is that it will and it will attract unwanted activities…especially in areas like Noble Park. Not to mention who will take responsibility of the new open space reserve under the rail line. Someone will need to maintain it. Rail underneath is costly but once this costly infrastucture is put in place it is final and it will never change. We’ve spent billions and billions and billions on roads just in Melbourne alone. I think its time we invested properly in public transport, a more sustainable and efficent way of travelling.

[…] few more observations on the Bentleigh/Mckinnon/Ormond update — sorry to obsess over this, but it is a huge project directly affecting my local […]

[…] In addition to the station closures, buses will replace trains on the Frankston between Moorabbin and Caulfield beginning at the end of June. This is expected to last five weeks, coinciding with the opening of McKinnon station. […]