I bought some Billy bookshelves for the livingroom some years ago. I picked their beech colour… and then they discontinued it.

While I love the look, and the reconfigurability of the moveable shelves and the fact that you can always buy more (well, except in beech, so not really in my case), I can’t say I’m impressed by the strength of the shelves.

Some of the longer (80cm) shelves of the two bookshelves are noticeably flexing under the weight. Perhaps this shouldn’t be a surprise — they’re obviously built down to a price. 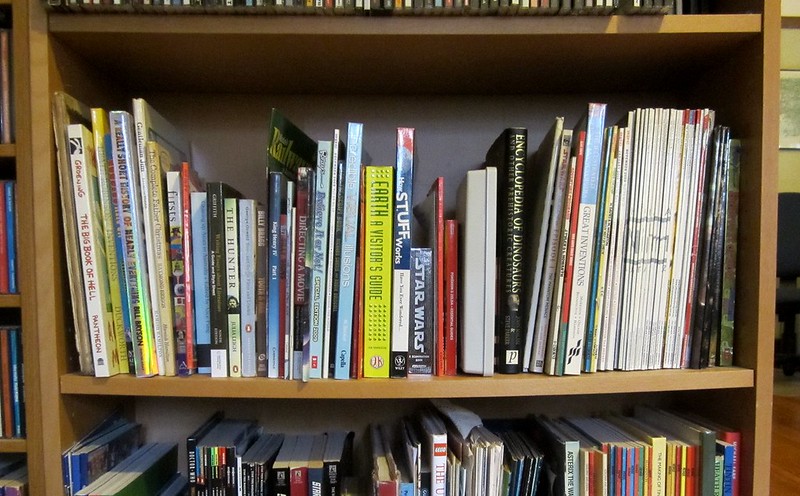 It may be time to have a clear out of old books (I can see a few in the pic that I suspect we don’t read anymore), and switch the contents around and put some lighter items on the long shelves. Do other people with Billy bookcases have this problem?

This article says that Ikea has been upgrading Billy: including stronger shelves. I wonder if this is why they discontinued the Beech colour? Perhaps it was more susceptible to bowing?

Ikea is a worldwide operation, but it’s unclear if/when the upgrade made it to Australia (the above link and this article indicate they started shipping them in North America in August 2014), but I’ve been pondering more Billys anyway for a neighbouring room, as the shelf options mean they are more space-efficient than the current bookshelves.

I could fill the wall with the shorter Billy option. It’d be more expensive (45% more, since it’s $69 for 40cm vs $95 for 80cm), but hopefully avoid any future shelf strength issues — and they’re not really expensive.

On the other hand the old solid wood bookcases I have are pretty tough, probably inherently superior to any Billy wood veneer bookcases, so perhaps I just need to stick with what I have, and re-arrange things to be more efficiently shelved.

Are there other good, widely-available, affordable options which include configurable shelves?

Shelve any plans to buy a new one. (Couldn’t resist saying it!)

A few months ago I bought a single extra shelf for the Billy bookcases I have had for a number of years, when I got home I found that they had slightly changed the profile of the shelf and had changed the pins to be smaller. I was able to use some spare pins (generic size used on all sorts of shelving) but if you know to look the shelf stands out as different…

We used to use Billy but the same thing happened, the shelves started sagging. We replaced them with Bestå (also from Ikea) and they are much stronger. I think the 60cm width (as opposed to the 80cm of the Billy shelves) helps.

I feel your pain here, Daniel. But as my wise (serious shopping) sister says: you get what you pay for. I am happy with the strength of the cube-shaped IKEA shelves, and the (expensive) custom built bookcase made by a cabinet maker. But when I glance along the shelves I’m appalled at the number of books I haven’t opened in the last 5 (even 10) years, and sitting around reading in retirement just doesn’t excite me any more…

Yes, make your own. We have made 4 very large floor to ceiling (nearly) bookshelves over the years from pine (and stained or painted) and none of them sag at all despite being filled almost beyond capacity. We also have a full wall bookshelf in our hallway which is wonderful and doesn’t sag either. We always make more bookshelves to house our collection as it grows. Despite this there are still a lot of books stacked on tables and sometimes the floor.

I suspect the redesign is precisely because the old design couldn’t really support a shelf load of books.

We’ve just bought a new Billy. The Billys are rated at 30kg per shelf. I weighed 40cm of books (hardback A4 sized railway histories) and came up with 21kg. So this would be within spec for a 40cm Billy, but not an 80cm Billy. Not surprising your shelves are bowing. IKEA themselves say if you have big books you should choose the narrow Billy.

Since the 40cm shelf span is shorter than a Besta, the shelf depth is smaller, and the construction sturdier (I’ve just erected one Billy and four Bestas – the Billy’s are heavier for their volume, the back is nailed on, and two shelves are located with hooks :-), I’d expect the narrow Billy to outperform the Besta in not bowing. But I wouldn’t use an 80cm Billy – unless you didn’t really want to load it with books.

As for competing products, I had a look at them. Solid timber is hideously expensive, and IMHO, the pine one are just hideous (others may have a different view, of course). The particle board ones are still expensive, and are basically the same material as the Billys.

Oh, and other options?

Have you thought about secondhand office furniture stores? I’ve never seen the shelf of a typical office bookcase bow, and they even often come in beech colour.

I bought some Raeco library shelving many years ago. Now that is strong. No sign of bowing no matter how many books I double stack on it. Not cheap though, but lasts forever, and can be disassembled and adjusted. Also ugly as. Stefi won’t allow it in the house, so it supports my reserve collection in the garage :-)

Re wondering if the Beech type was weaker, that seems highly unlikely. Most flatpack furniture is chipboard with a plastic coating to look like real timber. If any of the strength is coming from the plastic layer (regardless of colour), then the actual structure was never very stable to begin with. It’d be like an old steel rainwater tank being held together with thick coats of paint over the rust.

We did a similar thing and lined a wall with the 80cm Billy’s around 3 years ago and already some shelves are showing sags. We have a hodge-podge of wooden bookcases scattered around the house and they do compare much better than the Billy stuff. Now that we are more affluent (ie: paid off the home loan), we’ll be replacing the Billy’s with wood cases. We are going to find a local carpenter to make them and we’ll stain them and do the finishing touches.

I’ve always had trouble with bookshelves that can’t handle the weight, and also those pins that hold up the ends breaking.

The vertical component of the Billy is fine, if your shelves are sagging replace them with pine (inexpensive) or hardwood (check your overdraft facility) and stain to match. That way you can replace shelves as you need to. I own mid brown Billy bookshelf systems and was able to expand via eBay purchases a couple of years ago. I’ve recut and rebuilt parts of my bookshelves as needs, and keep my heavy stuff on the lower shelves!