Liberal Caulfield MP David Southwick has a campaign running to get the Glen Huntly level crossing grade separated. I somewhat cringe at the “Blame Labor” rhetoric, but the rest of it I agree with completely.

I lived in the area for 8 years, and know only too well that the train/tram crossing causes suburban and freight trains to slow to a crawl, delaying pedestrians, trams, cyclists, buses (on nearby Neerim Road), ambulances (there’s an ambulance station further west on Glen Huntly Road) — as well as train passengers both trying to get in and out of the station, and on the trains themselves. Even express trains have to slow down to 20 km/h.

So I went to sign the petition… onto David Southwick’s web site: 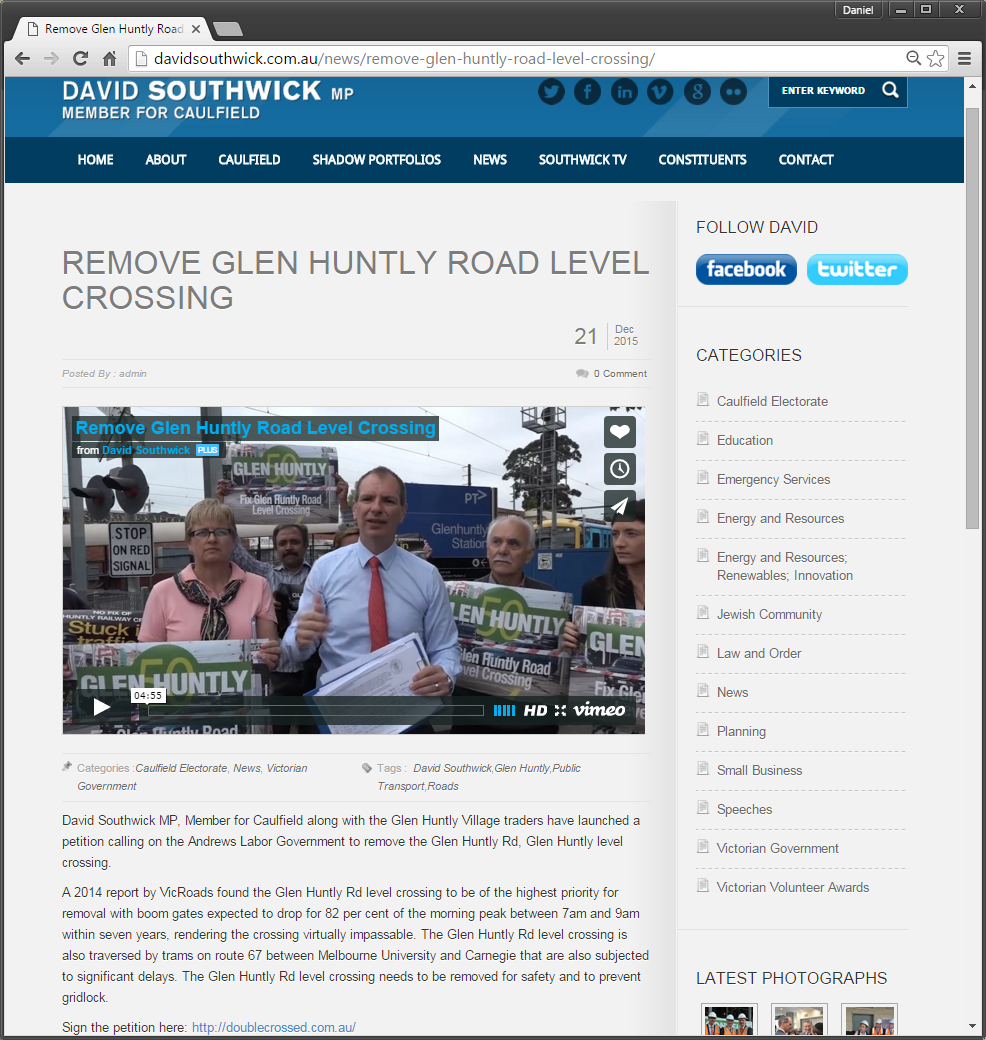 At the bottom it says: Sign the petition here: http://doublecrossed.com.au/

But clicking through, what do we find? 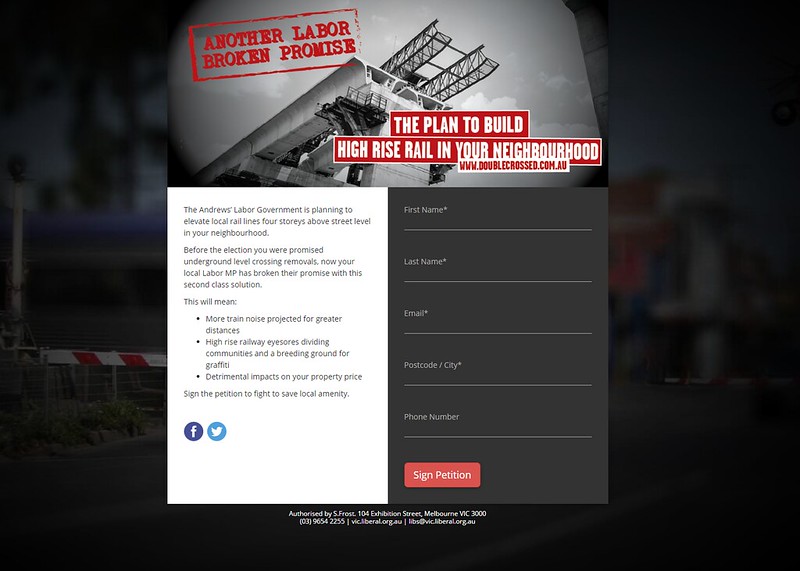 Indeed, thanks to the reclaimed swampland in the area, it’s possible that the only practical way of doing it might be to use elevated “Skyrail”.

It seems when David launched his campaign, the initial Double Crossed web site was indeed a petition in support of more level crossing removals: 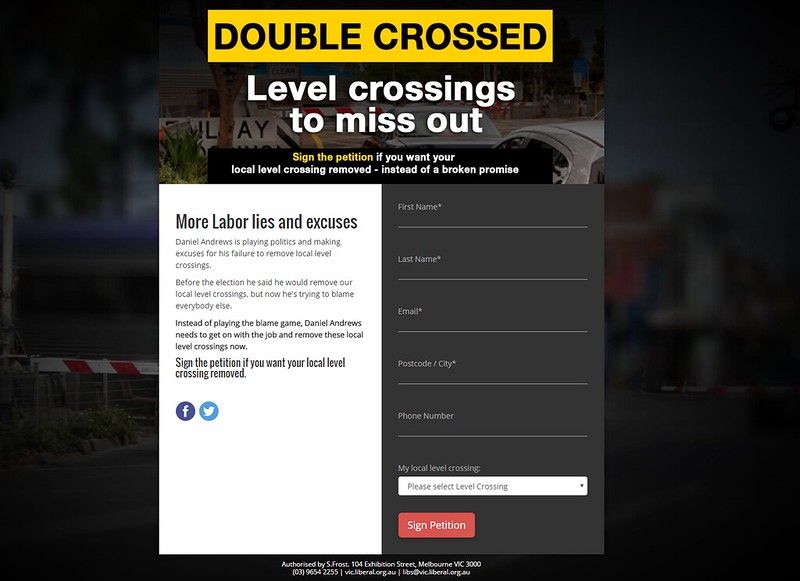 Early this year when it was revealed the government planned the Caulfield to Dandenong crossings to be elevated, the Libs changed tack and the Double Crossed web site became the “anti high rise rail” petition you see today.

But nobody updated David Southwick’s links. And I wonder how many other Liberal MPs have similar campaigns now inadvertently linking to anti-Skyrail petitions?

Perhaps not many. The only one I could find was Christine Fyfe (MP for Evelyn): “Sign the petition if you want your local level crossing removed – instead of a broken promise.”

Other Liberals have links to it, but they are clearly about Skyrail.

So where do I sign in support of removing the Glenhuntly crossing, but keeping a neutral stance on Skyrail? Perhaps I’ll need to go into his office to sign.

10 replies on “Glenhuntly level crossing and the vanishing petition”

Red blue and green I don’t like the way they play, thank you Daniel another excellent post.

Also the local Liberal member wasted no time sending out “No Skyrail” stickers for people to stick on their letterbox. I threw it in the bin. Did the Labour party try this with EW-Link?

Don’t think I’ve ever seen a Labor endorsed stickers against the EW-link but I’ve seen those “trains not tolls” posters around the inner-north.

On the other hand, I’ve seen a handful of cars with “EW link – just build it” stickers on them.

If the Liberals really wanted to separate the Glenhuntly Level Crossing they should have done it during their 4 years of office. But they were just too busy wasting time on their East West Link.

This is another Up and Over location. That has been said for ages now.

The problem is, they could be doing this at the same time as the current grade separations along that line, and could be an interesting test to what the Dandenong line is going to be like?

What a ridiculous campaign! The Liberals did bugger all about level crossings. Now that Labor is pressing ahead with removing 50 of the 170-odd level crossings in Melbourne it’s somehow Daniel Andrews’ fault that this level crossing, which has been around for decades, exists. Also at the same time it’s a broken promise, because why not. The list of level crossings to be removed hasn’t changed, so the campaign was a complete lie, even before the switcheroo. Wouldn’t be putting my name on that!

Actually, the ideal is that Glenhuntly and Grange Rd are opposite, to give easy merging at Caulfield Junction. So if Grange Rd elevated proceeds, then Glenhuntly (and Nererim Rd) should be sunk.

Yes, I agree with the other readers, the Liberal Party member’s policy(David Southwick) is a bit shallow and I also notice one of Mr Southwick’s supporters (Mr Harry Rose) in the background, holding out “it’s another ALP stuff up” placard. Mr Rose owns half the shops in the Caulfield area anyway, so he’d never vote Labor, no matter what!
The Liberal Party, during the Kennett years wasted the opportunity to do some more level crossing removals(besides just Boronia & Westall Rds) , especially when Mr Kennett was bridging his “tollway”, along the SE FWY, Mr Kennett could’ve easily done Burke Rd & Tooronga Rds then, but was more into shallow showmanship & arrogance and the “must have” Budget Surplus that every Liberal Govt is expected to deliver each financial year!
And today Matthew Guy & Co accuse the Daniel Andrews Govt of “arrogance”, what hypocrisy!!!

Why can’t Glenhuntly and Neerim road crossings be removed? Is it because the steel carrying locos goods trains can’t manage the gradient from a cutting or from a sky rail? How about keeping one track at ground level for these trains and elevate the suburban 3 tracks over Glenhuntly and Neerim Roads. A fourth stretch of track at either end for the goods that then swings back on to the existing track when the sky rail is high/low enough. Remove the existing Glenhuntly station and two of the three existing tracks. Plenty of room along Leamington Cres for the short stretch of fourth track and also along Katandra Rd north of the present road underpass. There is a greater length of track north and south of Glenhuntly to reach the Skyrail height than from Caulfield to Grange Road. The steel train only uses the lines a few times each day and the road crossings would be open during peak road traffic times. This would greatly improve road traffic flow and tram services.