This week marks the first weekday shutdown of the Frankston line for level crossing removal works. It lasts until Sunday, but there will be a lot more later in the year.

And obviously more on various lines as the many level crossing removals take place. Gradually it’ll affect most of Melbourne’s train lines, so I think it’s worth exploring in some detail.

I’ve got a post coming on the bus replacement services themselves, but first I wanted to post this question:

Are they a paid service, or not?

There’s great confusion over this issue.

On Monday morning an Authorised Officer (AO) was at Bentleigh touching-on people’s cards, but he missed me. I touched-on as I boarded the bus.

On the Monday afternoon trip the bus actually had no Myki readers.

During other trips this week, I’ve asked stop staff and bus drivers, and had different answers. Some have said yes, touch-on if you can, others have said no, don’t do it.

One bus driver called out to the whole bus “never touch-on on a replacement bus service! The readers aren’t programmed for train replacement services!”

On a tram replacement bus service recently the bus driver repeatedly told boarding passengers not to touch-on, that it was free (though he also joked that people should feel free to slip him $5.) 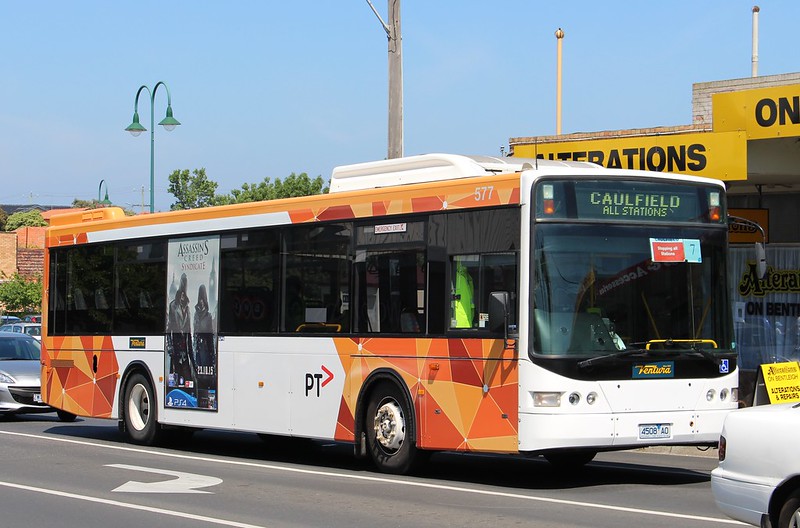 Ask Metro and they tell you it’s a paid service.

@danielbowen Train replacement buses for the Frankston line works are still normal services so a #myki should be used.

I’ve spoken to some of the Metro people involved in organising the services (hi if you’re reading). They’ve said the expectation is bus Myki readers won’t be used. People would touch-on at a station if their trip started on a train. If the trip started on a bus then transferred to a train, they’d touch-on at the first station they encountered, though in some cases AOs would touch them on at the bus stop. (This is what I saw on Monday morning peak, but they’re not around outside peak.)

That kind of makes sense. If there isn’t a train touch-on before you board the train, then you’d risk getting stuck at a fare gate when reaching the city, as well as a possible fine.

What does the manual say?

What does the bible, the Fares And Ticketing Manual, say?

Page 14: When replacement vehicles are provided, tickets are valid on the alternative services to the same extent as they applied on the original service.

OK. That makes sense. No problem there.

This is nonsensical, particularly in this context.

Some of the buses have working Myki readers, some don’t. You don’t know until you board, and the railway station is up to 600 metres away, so it’s impossible to go and touch your card there. (In fact the stations are fenced off, with staff outside pointing you to the bus stop. You can’t go in.)

Even if the station were adjacent, is this really a sensible answer? If you first checked whether the bus had a working Myki reader, and if not went to use a station reader, you’d either delay the bus or miss it.

(By the way, there’s some fascinating/confusing stuff about Night Buses on page 63 that ticketing nerds might like to have a look at.)

It’s not a good sign that there are completely opposite answers depending on who you ask. 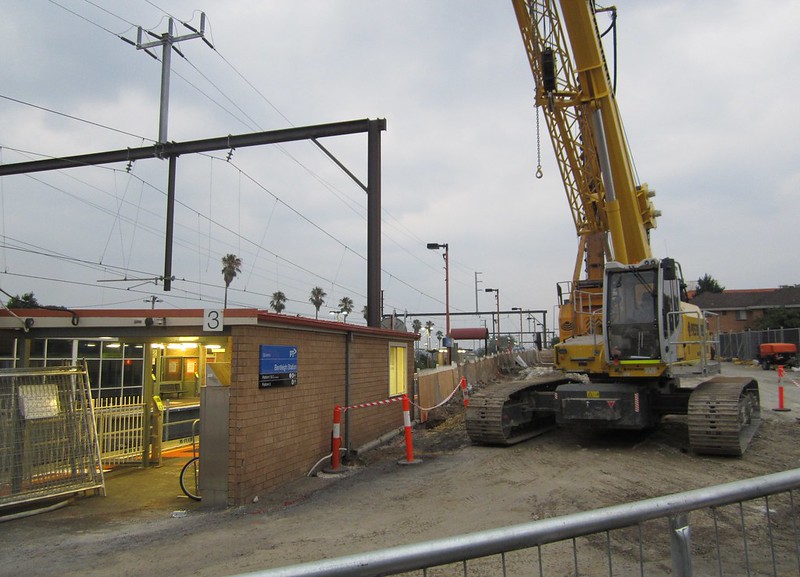 So, are we thoroughly confused yet?

I’m no fan of free public transport, but I think it would make sense for all suburban train (and tram) replacement bus services to be free.

It doesn’t make sense to try and collect fares on these services. They might as well be free, and to avoid any doubt, the Myki readers (if installed) should be de-activated on these trips.

And if, as at Caulfield, extra (non-Myki) gates are open for passengers to enter from the buses, AOs should be deployed there to help passengers touch-on their cards as they come through.

Metro and PTV always write that you have to have a valid ticket for the replacements (as did Connex and Metlink in the past), but in practice I’ve never actually been asked to do so. Bus drivers just wave everyone on and (before 2013) Metcard machines would invariably be closed. Same story with tram replacements, although I did pay for a train replacement coach to Geelong.

I don’t care if it’s free or not (and I’m a believer of a paid-up transport system as opposed to one that is nominally free), but please don’t tell us to tap on, only to have the system charged us the wrong fare because they’re not properly programmed!

Bustitution is often a stressful for customers particularly those with heavy luggage, limited mobility, children & buggies. In general stressful for all parties station staff, operators and the general customer. Disruption should be minimised in this case.

I’m no transport official but I say free bustitution.

We’re about to deal with a medium term large scale bustitution in 2018 with one of our lines converted to metro (ECRL). Rumor is there are going to be a need for a lot of buses about 75 but in reality more like 90 since its NSW and TfNSW. With 300 odd daily services. Its get more confusing as well. http://nwrail.transport.nsw.gov.au/The-Project/Epping-to-Chatswood#2

Then Sydney has more large scale bustitution in 2023.

They could bring in totem myki readers at temporary bus replacement stops that acts like a station reader only when needed and disabled all other times. This would act like the AO’s touching you on but always there.

“It’s not a good sign that there are completely opposite answers depending on who you ask.”
That sums up the public transport system. As you’ve said in the past, the people who design the system don’t actually use it. Why would they care?

I like your reasoning to make the replacement bus free:
“At busy times, every passenger touching on and off the bus would result in long delays at stops.”

The exact same argument works for the free tram zone in the city, by multiple orders of magnitude.

That is why the free tram zone in the city was a very logical and practical move by whoever thought it up (well, whoever approved it really, as there are many good ideas thought up but they don’t always get implemented).

Tram`s have Myki validators spread more evenly across them than buses do and are easier to move around in as well. This allows people to get further into the tram before validating. All door boarding, not available on buses, also helps because the boarding passengers are distributed more evenly.

Trams also do not require touching off, except to get the lower zone 2 fare at the outer ends of the longer routes, for precisely that reason and this was working fine.

The Free Tram Zone just fills up trams at already their busiest point, the CBD, with extra passengers, most of whom drove into the CBD. A stupider PT policy is hard to devise.

Are they operating buses between Moorabbin and Elsternwick?

It would make a lot of sense, given it is highway all the way between, to direct Frankston line passengers onto the Sandringham line at Elsternwick.

I am a great fan of extending trams along that way too, as it would become a fantastic substitution of trains whenever the Frankston railway ever needs to be closed inbound from Moorabbin.

What about at railway stations with the gates such as at Flinders Street, Springvale……

If you touch on, you must walk through the gates, then you must touch off to get out again.

What about at the destination, how do you enter the gates, if your ticket says ‘you have not touched off’?

On a trip a few years ago, I travelled from Melton to the city, and had to use the one and only daily coach service. I was returning home from taking part in ‘Derryn Hinches Jails to Justice’ march.

That coach had no MyKi, but was required to touch on. We where right next to the gate at Melton, but a commuter train from the city had just arrived, and there was quite a scrum around the Myki machines, so the driver said, we dont have time for you to touch on this time, so I rode all the way into the city without touching on.

I, like most people, think this is a bus service, Ok, it is a coach not a bus, but still a bus really, and therefore MyKi machines should be on the bus.

The system is very confusing in deed.

@Jim: “What about at the destination, how do you enter the gates, if your ticket says ‘you have not touched off’?”

That’s not how Myki works. If you try to touch on when you didn’t previously touch off, that’s what triggers a default fare.

[…] There remains confusion about fares. Replacement buses are basically free, but the signage and the official rules don’t adequately reflect this. […]