For the video editors in our family who need to move big files around, apart from internet upload speeds, I was also researching the fastest connection types for portable hard drives.

The bottleneck is the drive itself, and PC Pro found in tests that USB3 and Thunderbolt 2 basically achieved the same speed. Below I’ve put these results together with some MacWorld tests using a 7200 RPM drive.

So the practical speeds are:

MacWorld also found that with SSDs, there was some additional benefit for USB3 and Thunderbolt, with Thunderbolt being between 6% and 35% faster than USB3. Presumably a similar boost would be available on USB3 flash drives.

Why is Thunderbolt so much lower than advertised? Probably because it’s not just designed for storage devices. It can also be used for displays, which need a much faster data transfer rate. 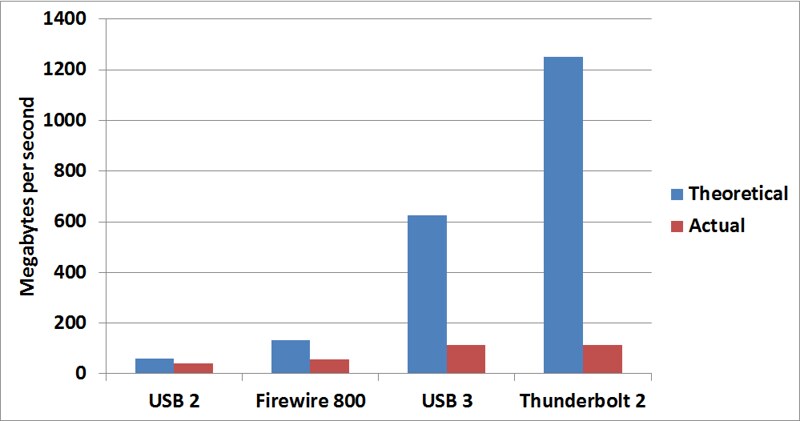 Thunderbolt also severely limits the range of drives you can buy. Most brands aren’t touching it.

My budding video editors have access to machines at uni that do USB 3 and Thunderbolt.

But at home we had neither; our old-but-still-good 2008 vintage “3,1” Mac Pros have USB2 or Firewire 800. They can’t be upgraded to Thunderbolt, but they can be upgraded to USB3 (for about US$60 each plus postage; cheaper than the “Thunderbolt tax” for single a high-capacity drive). So I’ve gone with USB3.

Yeah eventually I’ll have to replace the Mac Pros — they were secondhand when we got them 3 years ago — but they do have a bit of life in them yet… though one seems to be playing up a bit, grrr.

Back to some transport stuff in the next post

4 replies on “The need for speed part 2: Portable hard drives”

When did you last clean the Pros out?

Their airflow design means they collect a lot of dust which can end up in memory slots causing all manner of issues. Well worth vacuuming them if you haven’t done for a while. Also worth reseating all the RAM.

@Warwick, thanks. I have been clearing dust off the RAM, but I ended up doing that yesterday on the one that’s having problems. Some dust around the fan. There have been a couple of different problems…

– some RAM has developed a problem – those sticks have come out (checked them on the other computer, which doesn’t like them either)

– computer sometimes shuts down unexpectedly, usually in the late afternoon (but that may be a coincidence)

– graphics card driver is crashing (perhaps overheating; running a GPU temperature monitor shows it’s sometimes approaching the danger zone of 70+ degrees C. Worryingly, this is not the first graphics problem I’ve had with this computer.

I’m conscious that this has all occurred since the weather got warm, and I’m wondering if this is contributing.

Wow, this is in danger of turning into a fully-blown computer advice column!

Anyway, at least the USB 3 cards I got are working well.

My understanding is that Thunderbolt is like exposing a PCI port outside your computer – it is almost a direct connection to the main bus.

Thus rather than have a SATA interface on the computer and then plug into that, the external drive will have an on-board SATA interface that connect to the PCI bus via Thunderbolt.

Hence, excluding mechanical drives, the bottleneck you refer to may by the onboard interface – as the actual Thunderbolt itself should be a raw high speed PCI bus and doesn’t give two hoots what specific device is on it.

Pretty cool technology when you think about it – as it has opened the possibility that you can have a notebook that plugs into a box on your desk that suddenly delivers all sorts of extra hardware like higher powered video, audio, and other peripherals that would otherwise have required a desktop PC to plug in.

I think you also need to take into account the speed of the mass storage on the machines you are copying from/to. Unless they are equipped with SSDs (or RAID), you won’t get much more than about 150 Megabytes/second from them(*), so having a superfast thunderbolt thingy might be overkill.
I’m quite happy with my USB-3 external hard drives. I can reach a bit over 100 MB/sec doing a backup from my “C:” drive (a 60GB SSD). It is slightly slower backing up from the “conventional” disk partitions.
(*) I might be a little out of date – my newest internal drive is now around four years old, but I don’t think there have been any dramatic leaps in performance since then.