Given in the past it hasn’t eventuated, I was cynical about the predictions of long delays on the Westgate Bridge this week during roadworks.

In 2013, closure of the Domain Tunnel didn’t result in gridlock. It seems drivers were adequately forewarned, and didn’t drive, or found alternative routes, and/or used PT instead.

But this time, some long delays have eventuated. There could be a number of reasons for this, including the specific nature of this week’s lane closures, and the fact that (unlike when the Domain tunnel closes) many people are completely unaware of the alternative routes such as Footscray Road. It’s been two generations since people had to know another way across to the west.

There’s another reason so many people want to drive across the Westgate: for many of them there is no viable PT choice.

For instance, on Monday I was headed to a brunch with friends in Altona Meadows. The PTV Journey Planner informed me that to get there by PT, I would have had to have travelled on Thursday, and stayed overnight for four nights… I’m not sure that was part of the invitation. Or I could arrive some 19.5 hours late… not really a viable alternative either. 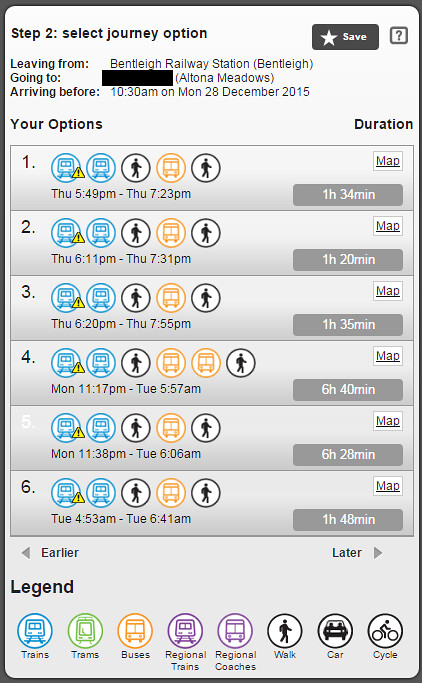 Eventually I tweaked the options to allow the maximum amount of walking, at the highest speed, and it decided it could get me about a 1km from where I needed to be — I could walk the rest of the way. But it would still take me ages, and I had stuff to carry.

It also relied on a connection to the 411/412 bus. The PTV web site is incapable of showing me a combined timetable for these routes, despite them sharing 90% of their route, and being timed to complement each other. But the biggest problem is the combined frequency is only 40 minutes on holidays, which means risking a long wait if the connection is missed.

(Being a typical Melbourne “connection”, the times are not coordinated, and certainly not guaranteed. It’s only a connection in the sense that the railway station is vaguely close to the bus stop.)

It’s a similar story if you’re off to Werribee Mansion/Zoo for the day. The train is every 20 minutes, but the “connecting” bus is only once an hour. At least it takes you to the entrance. Just don’t miss the 5:03pm bus back — that’s the last service, which I guess makes it impossible for staff to use.

This sort of choice isn’t really a choice at all, and it’s why so many people drive over the Westgate everyday, including on public holidays like Monday. With little choice, we shouldn’t really expect any other outcome.

As conservative writers Weyrich and Lind noted, just looking at mode share doesn’t tell you much about the success of public transport. A better measure is “transit competitive trips”, measuring market share where PT actually competes with driving — and generally in these it does quite well.

But it’s no surprise that PT doesn’t do well when the service offering is poor. 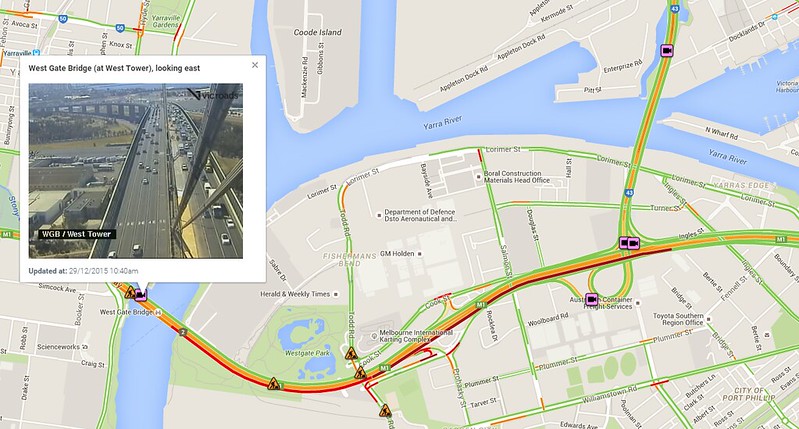 When people have few options, of course they’ll drive.

So yes, on Monday there were long delays on approach to the bridge, though much of the rest of the road network flowed smoothly.

(To avoid the traffic, I ended up doing PT part of the way, and hitching a lift with others attending the brunch.)

Bring back the chain ferry. That’d be a great second crossing of the Yarra.

A quick and cheap solution, but effective, is to have a network of 30 bus routes going over the Westgate.

Ten groups of three, or ten different ways to go on the western side of the bridge. Say, xx1 to Newport, and xx9 to Footscray.

Each one doing a 20 minute frequency during peak hours, yes I believe we may have enough demand to support this?

And, ofcourse remove one lane, and turn it into a bus only lane.

Jim, sorry, I think your bus idea has some issues.

20 minute frequencies aren’t attractive, especially in peak. People will stay in their cars.

Buses over the bridge to Newport and Footscray make no sense. They are better served by trains, which have better carrying capacity and are less prone to traffic delays.

The spine of the network is already there: rail provides it, and especially well if it is more frequent all day, 7 days. The problem, as I made clear from my post, is the suburban destinations/origins beyond the trains. Think feeder buses!

I’ve had my own ironic situation. To get to the “Bridge Over the River Kwai” (Death Railway, Mueang Kanchanaburi – 150km west of Bangkok, Thailand) one has to get a mini-bus (not a train), most of the time!

Then you need to get from the actual township to the bridge; in theory there’s a songtaew (bus route), but we hired a private songtaew instead.