Another from my series of ten year old photos. (Marcus Wong has joined in this game.)

Alas, not so many interesting ones from me in December 2005.

As noted in this post, on a single day, I received a truly dizzying amount of junk mail (plus two local newspapers). It was what finally prompted me to get a No Junk Mail sticker. I just wish I could explain to the newspaper delivery people that they don’t count as junk mail. 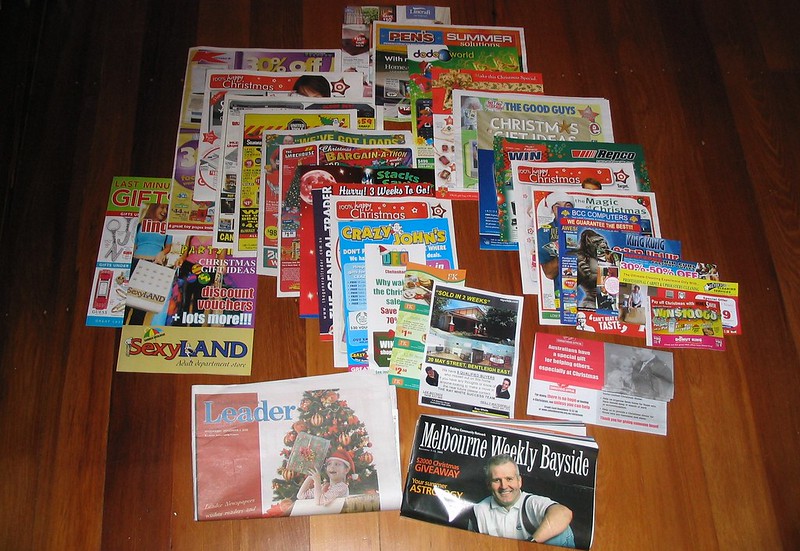 The kids (then quite young) did this using the old Canon A70’s photo stitch feature. It turned out a bit wobbly, but shows some interesting sights around the house ten years ago. Use the scroll bars or view it big at Flickr.

Most of the walls seem to have been undecorated — a number of pictures now hang. The old huge desk, replaced soon afterwards. The old BBC Micro was still around (since given away). CRT monitors. The lace curtains are now in storage in the roof. The old bulky printer… I don’t remember what that was, but it’s since been replaced by a Canon unit 1/3 of the size which is still going strong after many years. The old green couch dated from the early-90s, and was finally replaced in 2007. Hidden behind one door is the music keyboard, which the kids used for years, but got given to a cousin just recently. The bookshelves have since been filled, and probably are in dire need of a clear-out.

Bourke Street Mall at Christmas time. The timestamp indicates it was around 11am on the 23rd, before the City got busy with lunchtime shoppers, though I get the impression these days it’s a lot busier at 11am this close to Christmas. 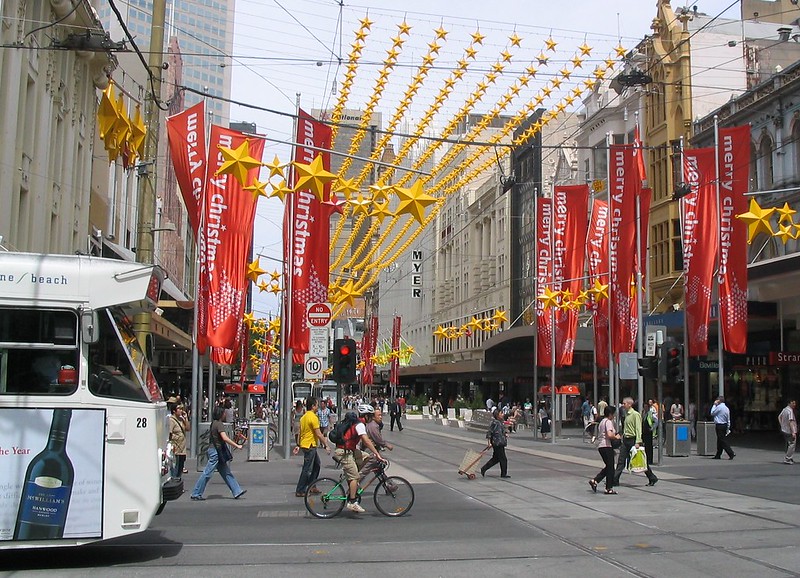 And I should just say: Merry Christmas to all my blog readers. Hope you’ve had a good year, and that it’ll be an even better 2016!

Merry Christmas to you, too, Daniel.
Thanks for another year of keeping us informed and entertained.

Photo stitching has come a long way in ten years.

Merry Christmas Daniel. Sorry for accosting you at Emporium the other day :-)

Cheeky buggers put junk mail inside the magazines sometimes. The magazines are mostly useless especially the “Melbourne Express” one which is the same content no matter where you get it.

I had to do “photo stitching” manually back in 1997 and adding hotspots manually to photos ala streetview. Was for a university project.

Oh my gosh, BBCs were fantastic for interfacing electronic circuits… from memory there was a port underneath the machine you could wire to and commands built right into the language for turning pins on and off. Created many fantastic projects in my younger years!

Years ago I purchased a heap of Ethernet based units that I could send commands to control electronic circuits, spent a good thousand bucks on all that stuff, but then I had kids and time for that stuff vanished!

And of course I aint to be left out of giving seasons greetings.

Merry Christmas to Daniel, and to all who surf and post here too.

Things have changed, and things are changing since that 10 years ago.

++ I believe there are no more D2s on #96? and now all the E class trams along with C2s on that route now too. Vicsig has confirmed that there are no D2s at Southbank anymore.

As for the next 10 years

++ Will E class in fact be cascaded from Bourke street and onto Swanston street by some future say ‘F’ class???