Here are some I’ve listened to recently:

Jamie Briggs on the infrastructure needs of Australian cities (September 2015) — Jamie Briggs seems to know what he’s talking about, and refrains from Labor-bashing as Michelle Grattan asks him about the new Cities and the Built Environment portfolio, and funding for public transport as well as roads. Well worth a listen to get a sense of Briggs’ and Turnbull’s thinking on these issues.

The Critical Transit podcast is run by a guy based in Boston, and has a lot of interesting stuff, though occasionally he gets quite ranty and (in my view) extreme. For instance in one he reckons any motorist who hits a deer is automatically to blame. I don’t think this is very helpful, and while I haven’t driven in the presence of deer, I know kangaroos can behave unpredictably, and may not be visible after dark. There’s pretty much no safe speed you could drive at to be completely sure of avoiding an accident.

But this podcast has a lot of good material, and he gets an excellent dialogue going with quality guests. 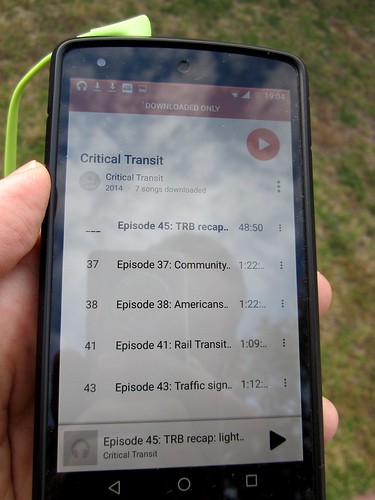 Episode 41: Rail Transit Safety with Marc Ebuna (December 2013) has a great discussion about rail safety, and automation, and a fascinating bit on the refusal of US authorities to accept standards from elsewhere in the world, causing problems for US transit agencies trying to invest in rail signalling and fleets.

Episode 38: Americans for Transit & debunking the small/electric car delusion (November 2013) has a bit at about the 19 minute mark which is podcast gold for advocates, talking about how operators, advocates and employees (unions) need to work together to campaign for better public transport.

Episode 37: Community Transportation with CTAA, another BART strike, and the government shutdown. (October 2013) — Community Transit isn’t something we have a lot of here – the closest equivalent might be low-frequency specialised services such as the City of Port Phillip’s Community Bus. But this episode touches on a number of relevant points, and guest Scott Bogren drops some golden quotes, a couple of which I’ll transcribe here:

“From young people, clearly driving less, are less apt to want to get that driver’s licence right away, and want to live in communities that have mobility options, to the growing population of seniors, who for safety and other reasons ought not to be driving, to the health care issues, there’s environmental issues… all of these things are driving passengers to the doors of the nation’s buses and trains.” [31:20]

One of the core points in the discussion is that mass transit doesn’t necessarily serve everybody, and community transit fills those gaps. Bogren also makes the point that for those users, speed is less important, and social contact with the driver(s) and other passengers is important. In a Melbourne context this underscores that such services could and should be considered. I was never sure that Hope Street in Brunswick, wedged between two main bus routes, should have its own bus service every 20 minutes, but a Port Phillip-style community bus might well be the answer there. (The government has instead chosen to resurrect the 509 as an hourly off-peak service which will place less demands on scarce bus+driver resources, while hopefully still assisting those with mobility issues who can’t use the nearby parallel bus services.)

The Infrastructure Show is a little more polished/edited, based out of Northwestern University in Illinois. Unfortunately their MP3 server is a bit dodgy, and sometimes the downloads fail (from mobile at least). But they cover a lot of interesting stuff, and again, have good guests.

Unfortunately I can’t link to individual entries, but some episodes I’ve listened to include:

Measure R – the innovative transportation funding process that benefits Los Angeles County (November 2014) — we have a completely different way of getting funding, but it is tied to electoral cycles. One lesson here was that to gain popular support for projects, you have a long term plan, you don’t just spring big new ideas on people (hello East West Link!), but build up support over time (hello Metro Rail Tunnel!).

Bus travel in the suburbs – the challenge of providing seamless transportation for riders (August 2013) — there are challenges for US authorities and users which are pretty much unknown in a Melbourne context, for instance a complete lack of footpaths in some areas. So even if they can build a bus stop, there might be no safe way for people to get to it.

London’s congestion charge — on its 10-year anniversary, a look at lessons learned (March 2013) — very interesting, and with lasting effects. Makes me wonder if such a thing could ever work here. One of the points was that the charge for most people is avoidable, because London already had an extensive public transport system in place. They also point out that the western extension (since scrapped) took the charge beyond the central city core, which was very unpopular, but it’s now accepted that the charge is here to stay in the central city.

The Eagle P3 East Rail Line – a public-private partnership that will connect Denver’s downtown and airport (August 2012) — Denver Airport is the world’s 11th busiest. The Eagle acronym stands for EAst Gold Line Enterprise. And it’s a PPP. It’s a similar situation to Melbourne: they have express buses to Denver’s airport (but only every 15 to 60 minutes), but they get caught in traffic, and they wanted a reliable service that wouldn’t degrade in reliability as time goes on. The result is a brand new rail line under construction, to run every 15 minutes and do the trip in 35 minutes. It’ll serve suburban commuters as well as the airport, opening in 2016.

Much of the episode talks about the PPP, using an availability model over a 6 year construction + 28 year operating contract. The state sets and collects fares. They talked about the concessionaire bringing innovative ideas to the table: lighter rail given no freight carrying requirement; off-the-shelf trains instead of custom-built — these sound logical. Making part of the line only single track… I wonder if that’s a good idea in the long term.

Public Transport User Experience — This is material for an assignment, but makes some really good points about the design of PT maps and signage.

I’m sure there are other good podcasts out there in this area… it’s a shame some of them don’t make it easy to download audio via a web browser; instead they want you to use iTunes.

But I’ll keep digging around for more to go running with. Any suggestions for others I should give a go?

Maybe I should seek out podcasts on other topics that interest me as well. Geek/programming, sci-fi… I’m sure there are plenty out there.

Apparently a jogger was run over by a car backing out of a driveway while he was listening to a road safety podcast. Couldn’t hear the sound of the car reversing.

@Roger, was that a one liner, or an actual event?

If the latter, I would note that it’s the motorist’s responsibility to give way on driveways. If s/he couldn’t stop, then they were driving too fast.

In fact even if running without headphones, would you hear a car reversing? I doubt it. You’d hopefully see it, if it’s not moving too fast, but high fences can play havoc with visibility.

Yesterday I watched a lady drive slowly out of a supermarket carpark, oblivious to the pedestrian walking across the driveway right in front of her. Some people just don’t pay attention. I’d have got far shoutier than the pedestrian did.

Try ‘Hello Internet’ Quite popular, quite geeky, and has a bit of everything.

There is another podcast from the ABC about Uber vs taxis.

[…] to a lot of transport-related podcasts recently. Almost all of them are from outside Australia. (Here is a list of some from November 2015; I mean to post another list at some stage […]