The Murray Road conundrum: can a crossing be provided? As I’ve touched upon in previous posts, there are numerous technical hurdles with the Bentleigh area level crossing removals.

Via the stakeholder group I’m learning that a lot of the cost with any removal where the railway line is dropped down under the road is related to carefully moving all the services that are buried — gas, water, phone, electricity and no doubt others. A lot of the cost is also in “occupations” – shutting down the rail line and providing replacement services.

My previous post on the project has a lot of detail on the overall project, if you’re not familiar with it, but one issue has come up repeatedly which hasn’t been resolved:

Can a pedestrian crossing be provided at Murray Road? 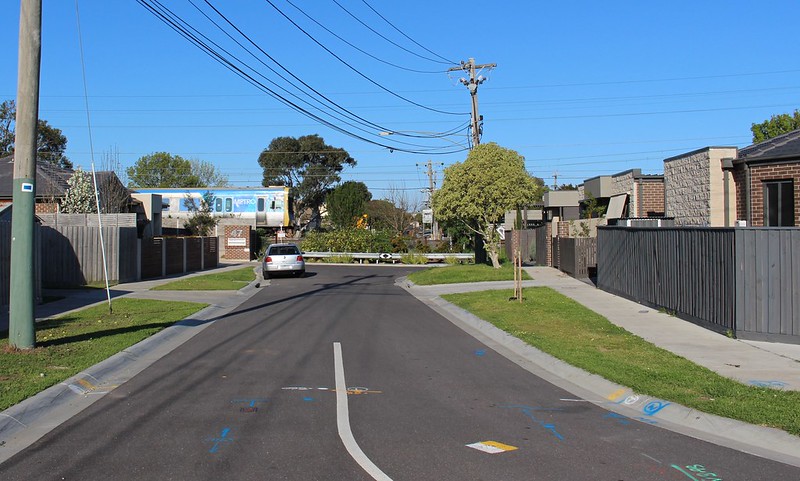 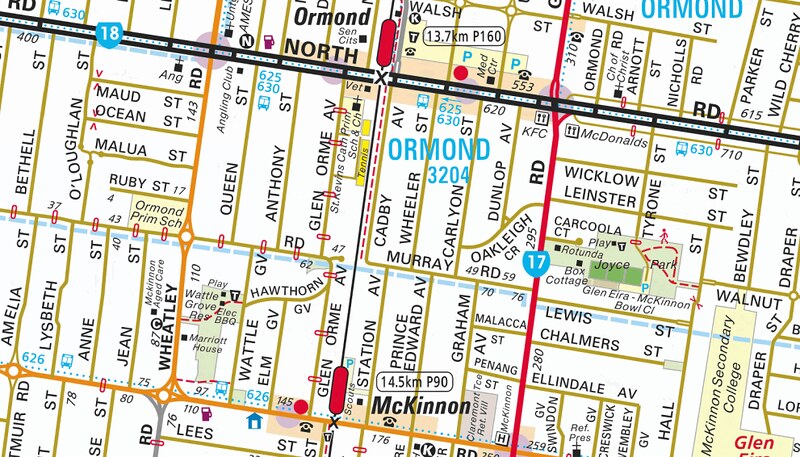 Murray Road sits midway between Ormond and Mckinnon stations, which is one of the longest sections of track in this area that has no crossings.

The history is hazy, but I’ve heard numerous accounts (including a blog commenter) of a pedestrian underpass having been there in the past — possibly an informal crossing which was really part of a creek/flood plain running underneath the tracks, which is clearly shown in this MMBW plan of the area. 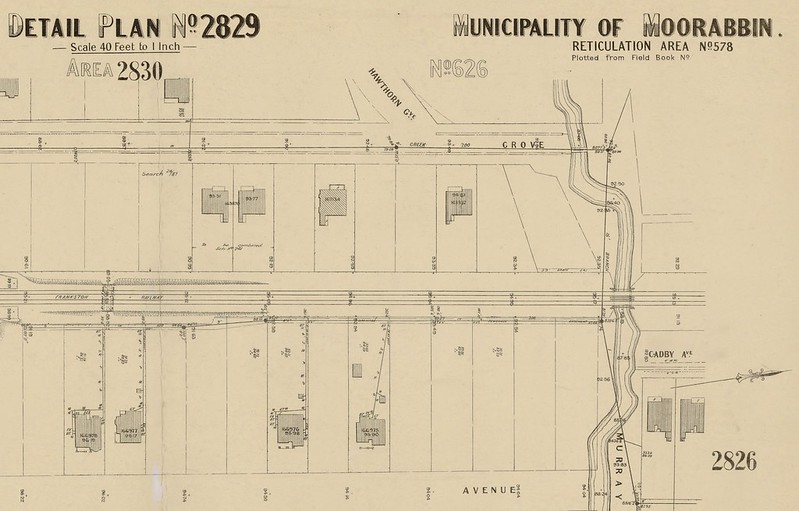 Apparently the underpass was filled-in in the 1980s when the third track was added, and any trace of it has since disappeared, with the local roads having been fully sealed over the top, and houses built right up to the line on the western side.

The only real indicator I could see is a small park on the western side with obvious water-related infrastructure present, with manhole access to pumps, floats, vega and penstock.

(What is a Penstock, anyway? Oh — Wikipedia says it’s a “a sluice or gate or intake structure that controls water flow, or an enclosed pipe that delivers water to hydro turbines and sewerage systems.” And a vega? It might be this: “a meadow located within a forested and relatively small drainage basin”.) 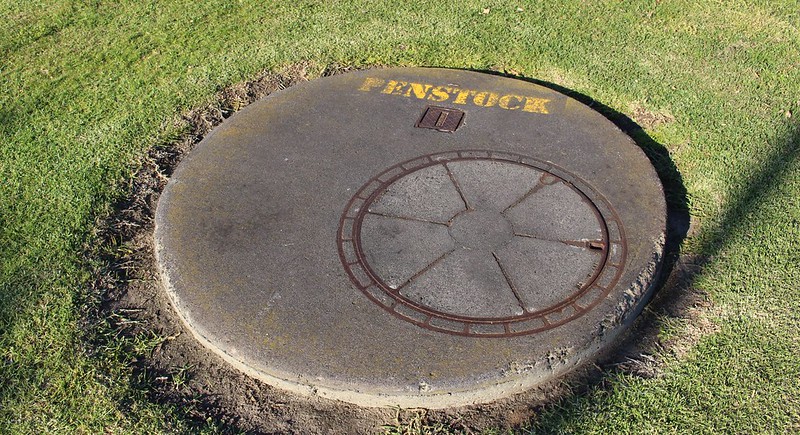 Because of this underground water and the pipes that carry it, the level crossing removal project has to build the line back up to street level between the new Ormond and Mckinnon station underpasses. And this appears to be the key problem in providing a pedestrian crossing.

Not unreasonably, the government doesn’t want to build at-grade pedestrian level crossing. The project is focussed on removing level crossings, not building new ones. In fact there’s a government policy of not providing new crossings, and the project team says the only way it would be done is if the Minister for Public Transport specifically approves it, based on advice from the relevant authorities.

The safety record for at-grade crossings isn’t great, though it seems to me the big problems occur where they occur on busy streets, particularly in busy shopping centres and adjacent to railway stations.

Putting in an overpass appears to be problematic, with issues of privacy from views into back yards, and a lack of space to build ramps that would be required to make such a structure accessible. The project team says acquisition of public and private land would be required.

But what about an underpass?

Space is tight, and DDA (ramp) access is obviously an issue, but some local campaigners believe it should be possible to provide an underpass alongside the existing water pipes, either parallel or at an angle across the line.

Apart from the water pipes, there’s also a high pressure gas line somewhere there, and the project team says flooding would be likely to be an issue, with installation of a flood wall being necessary.

There might be impacts on the eastern (Cadby Avenue) side of the line, but this could be an opportunity to use a traffic-calming road chicane to slow down cars — chicanes are common around Glen Eira, with several in nearby streets.

There are concerns that an underpass might have to have blind corners, reducing visibility and safety. But these are not an insurmountable problem — mirrors and effective lighting can be used to improve visibility.

Theoretically another option would be to lower the rail line at this point instead, but the project team says that too would not be practical due to the cost of relocating services, particularly the storm water drain. 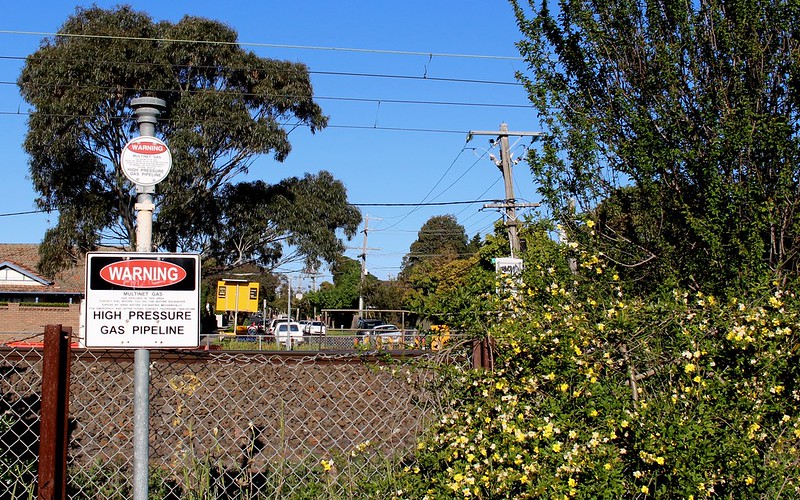 Why would a crossing be useful?

To the west, Ormond Primary School is on Murray Road. To the east, there is Joyce Park and the northern end of Mckinnon Secondary College. And in fact a few years ago, a pedestrian crossing on Jasper Road was built close to Murray Road.

Providing an east-west route on that alignment would bring a vast improvement to mobility for those walking or cycling in the area, and is likely to reduce car use for local trips which are currently impractical on foot.

It would certainly be a lot safer for cyclists, who currently have little choice but to use the nearest main roads. North Road is a traffic sewer, with no bike lanes. Mckinnon Road is quieter and with bike lanes, but as local member Nick Staikos noted recently, narrow bike lanes that are full of parked cars aren’t very useful as bike lanes. Mckinnon Road doesn’t actually have a great safety record — there have been multiple bike vs car accidents recently.

What the outcome will be isn’t really clear. One would hope the project team are doing their best to explore every option to see if a crossing of some kind is possible.

A huge project like a grade separation shouldn’t be planned in isolation.

This has the broader point about level crossing removals having a big (positive) impact on local communities, and that they should be considered as part of broader transport and land use planning for these areas.

No doubt there are similar cases right across Melbourne, where grade separation should provide an opportunity to provide more places to get under or over the rail line, to improve amenity and access.

Notably, none of this would be a problem if the line was being elevated. Perhaps that was never going to happen here, given the housing in close proximity to much of the rail line and the North Road (rail under) plans having progressed well before the decision to include the other two crossings, but there are some clear lessons here for other locations.

14 thoughts on “The Murray Road conundrum: can a crossing be provided?”