In most respects, what I wrote on the detail of the project in this post from July still applies, so read up on that if you haven’t already — or check out the official web site.)

Work is very visible along the rail line — trees are being cleared (in the case of palm trees, going into storage to be put back later), and road closures have started. There’s been piling, and relaying of railway-related cables (such as for signalling), and parts of station car parks are closed. 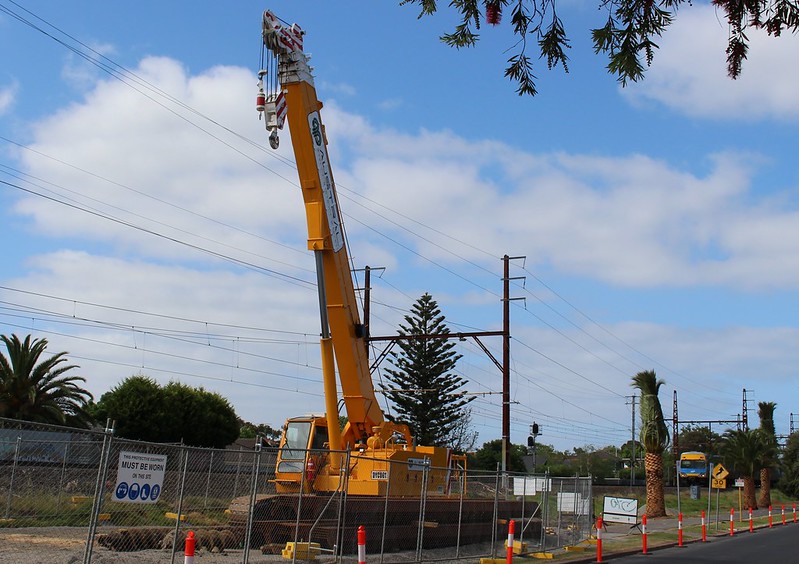 Nicholson Street, between Mckinnon and Bentleigh. Note the gift-wrapped palm tree. I assume that’s what they do when they’re about to go into storage.

The first (I think?) of the rail closures for this project will occur next weekend and of course there’ll be others.

Road closures are expected in North Road in January, and in Mckinnon and Centre Roads at Easter next year, ahead of the major shut down, still expected to involve stations closed and demolished while trains keep running, then a complete shut down of the rail line during major works.

The Bentleigh Sunday market will keep going throughout the project, but a section of the car park it uses won’t be available. Local traders at all three locations are considering street festivals or other events during works (and/or “welcome back!” events as the project finishes up) to encourage people to keep visiting.

I understand the overall project schedule is being reviewed, and details such as bus replacements (not just replacing trains, but also re-routing of regular local bus services) should get nailed down soon.

Most of the design is as previously flagged, but the project team are trying to incorporate a second entrance to Ormond station on the southern side of North Road. Of the three stations, this is the most important at Ormond given the width of the road. It may be difficult to fit the lifts/stairs for platform 3 on that side.

One option might be making the North Road entrance to Cadby Avenue one way. If I were a resident there, I’d happily take a partial one way street (with traffic reduction) in exchange for a much more convenient entrance. Mind you, I wonder if the project team has considered the additional entrance only for the island platform 1+2, given platform 3 is barely used by trains and people?

They’re also still determining the final decision on the Dorothy Avenue underpass, which originally was part of the Rosstown railway. The underpass will still be there, but with reduced clearance, and the question is whether it will be only for walking and cycling, or if cars will be able to use it too. Various locals seem to have views both ways on this. Some would like to see it closed to bring a local traffic reduction, some would like continued local access to destinations such as the oval.

I’m inclined to think traffic will reduce even if it’s still available for cars, as it will obviously no longer be a rat run for those avoiding the North Road level crossing. If it’s closed off, events at the oval may mean additional weekend traffic for Woodville Avenue and other nearby streets.

On the other hand, closing it off may discourage through-traffic along Oakleigh Road across Grange Road — that intersection scares the heck out of me. Either way, clearly this is one of those cases where you can’t consider the level crossing removals in isolation; they have to be looked at as part of the broader local transport network.

There’s still much debate about the possibility of a pedestrian crossing at Murray Road. I’ll have more on this in a post later this week. 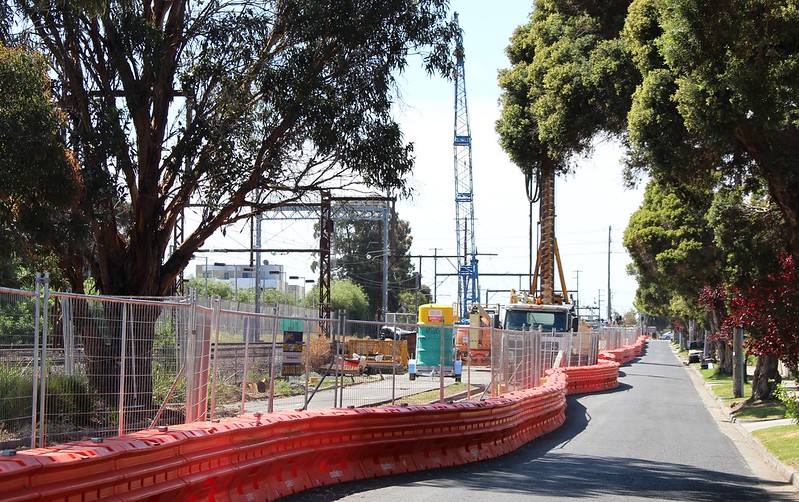 Cadby Avenue between Ormond and Mckinnon. Half the road is closed so they can work along the rail line removing the trees.

From November, the third track will be closed until the end of the project.

This will mean no express trains for about a year. I’m told all trains will stop all stations (presumably this means between Cheltenham and Caulfield, but unaltered between Caulfield and South Yarra), adding up to 9 minutes to travel times — but on the flip side, meaning more services for some stations.

(On one occasion in the past they swapped the stopping patterns between Caulfield and Cheltenham, so some trains could still run express. I’m speculating, but perhaps it didn’t work too well. It’s quite confusing for passengers; trains would be likely to catch up to each other, negating any express benefit; and it’s problematic that with such a swap the express trains would mostly terminate well short of Frankston.)

Obviously only having two tracks operational will allow the project team to do a lot of work on the rail corridor while trains keep running. The track which is closed won’t be constant. Two out of three will be in service, but the closed track will vary over the life of the project.

A “popup” information session is expected in November, and for locals a community update newsletter will be out in late-October. These are also published on the official web site, which is a good place to stay up to date.

It’s good to see this project moving ahead. Apart from delays to traffic (including buses and emergency vehicles), it’s pretty common as a pedestrian and passenger to get stuck at the gates, so grade separation will bring benefits for all.

” trains would be likely to catch up to each other, negating any express benefit”.
When I lived on the Glen Waverley line, this happened all the time with so-called express trains. So it would probably be best if all trains on the Frankston line stop all stations on the section where the third track is closed.

There should be no reason why expresses can’t run through the MATH stations exacty as they did from the mid-1920s to the 1980s, when the third track between Caulfield and Moorabbin was built.

And, it’s probably implicit in your “about a year”, but from late 2016 to Mark 2017 the timetable can get back about 3 minutes of dwell for the 3 statiions that won’t exist. That just leaves Patterson, Moorabbin and Highett as stops compared to the Cheltenham fasts, and maybe one or more of those could even be skipped. For off-peak users, the service during this period could even be better than normal.

(And why are there no expresses timed to arrive/depart the city around midday? Is it beyond PTV’s imagination that people might want to spend half a day in the city?)

I do hope, though, that they don’t reduce the speed limit. The track has recently been speed limited just north of Mordialloc, so Metro/PTB have form. It appears there is now so much slack in the timetable the drivers can catch up.

Can somebody explain why Glenhuntly is not being done as part of this? Surely this is the crossing that causes the most pain for train commuters?

It seems insane to grade separate either side of it but leave the tram square in place. We’re going to be stuck with 20 km/h trains for the foreseeable future when we could instead gave grade separation the whole way to Moorabbin.

@Warwick, I agree with you, there are plenty of good reasons for removing the Glenhuntly crossing.

– It would obviously have huge benefits for tram and train users, on top of pedestrians.
– You’d have to do Neerim Road as well, given it’s so close, but there’d be an opportunity to move the station to between the two roads and provide better interchange to the Neerim Road buses as well.
– Due to the location of the Ambulance Station in South Caulfield, it’s not uncommonly used as an ambulance route.

As to why it’s not happening just yet, some reasons off the top of my head:

– It’s not in the list of 50 that Labor took to the election – and for better or worse, they seem very keen on fulfilling their pledges
– Glenhuntly isn’t in a marginal seat like North/Mckinnon/Centre Roads are
– It would be difficult to lower the rail line there due to the local geology – I think it’s mostly reclaimed swamp land around there. Of course, elevated rail (such as seen at Balaclava, Glenferrie and others) could be an option

I’m hopeful (assuming Labor is returned in 2018) that once the 50 are done (2014-2022), the community and politicians will have a thirst for more, and the momentum will continue with more crossings being removed post-2022.

Remember that Platform 3 is likely to get an increase in patronage with the opening of Southland Station, the first major driver of counter-peak patronage for the triple track portion of the Frankston line (morning counter peak being the only time that the platforms 3 are regularly used).

@Tom, I don’t think anybody is suggesting moving Glenhuntly station to north of Neerim Road. The suggestion was for it to sit between Neerim and Glen Huntly Roads. (You may have mixed up the two roads. It’s GH Road that has the tram.)

I’m very glad to hear they are trying to include a southern station entry at North Rd. With a family member transferring between train and bus every day at Ormond Station (to and from school), it heartens me that this change will avoid the need to cross busy 6-lane North Rd, greatly enhancing pedestrian safety. As a side effect, North Rd drivers will also be less impeded by red pedestrian signals at thdformer rail crossing.