On Saturday I took a look at the Burke Road level crossing removal — it’s being done as part of the same package as the North/Mckinnon/Centre Roads crossings, but is well ahead of them in terms of progress.

The official web site has details of the project — because there’s space available, the new rail line and new station are being built parallel to the old ones, similar to how Springvale was done. 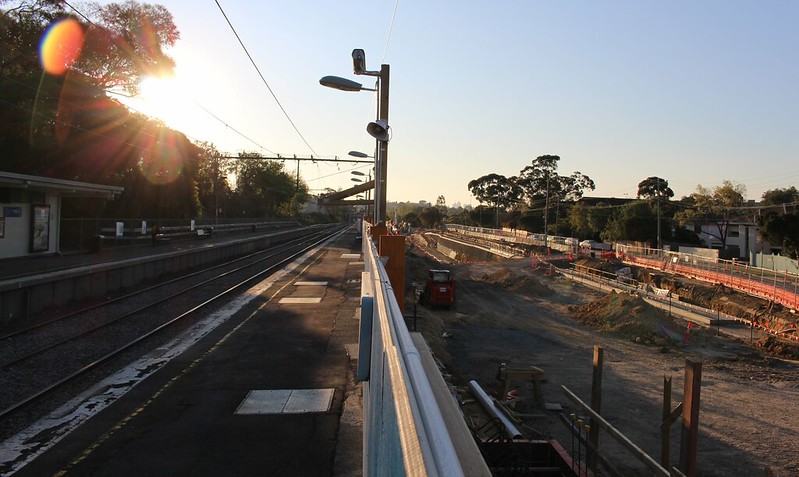 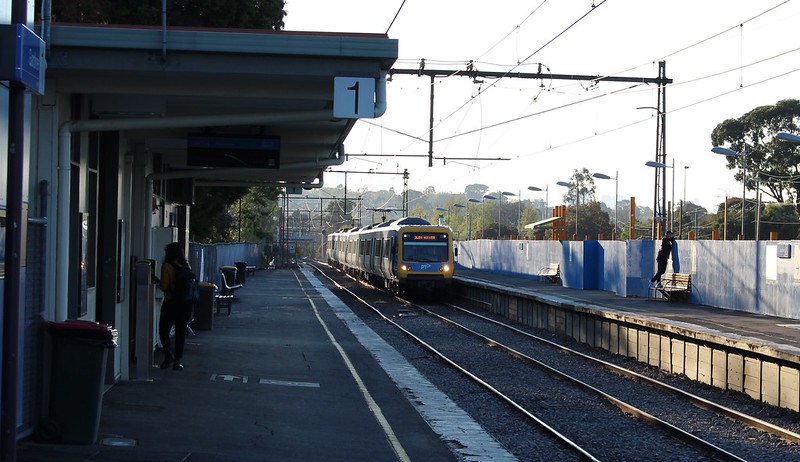 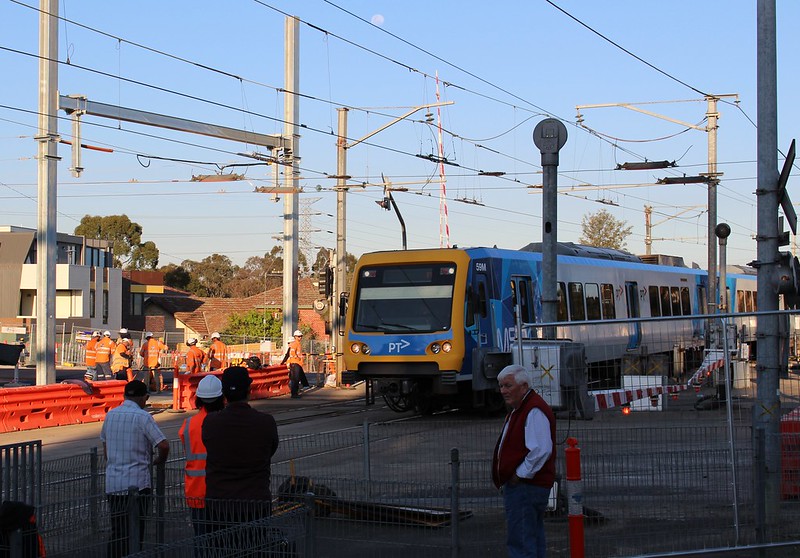 Last week the Glen Waverley line and Burke Road were both closed so they could build the new bridge deck, then dig under it later. (A similar method is going to be used on the Frankston line crossings in the package.) During this time train passenger connected from Darling Station to Caulfield by bus. This seems to have gone quite well, with plenty of staff to direct people. Being school holidays no doubt helped.

At Burke Road, signs proclaimed the local businesses are open, but they looked pretty dead. Perhaps they always are on Saturday afternoons; I don’t know. The scuba shop highlighted in the local paper a few weeks ago had signs up saying they had moved to Camberwell. 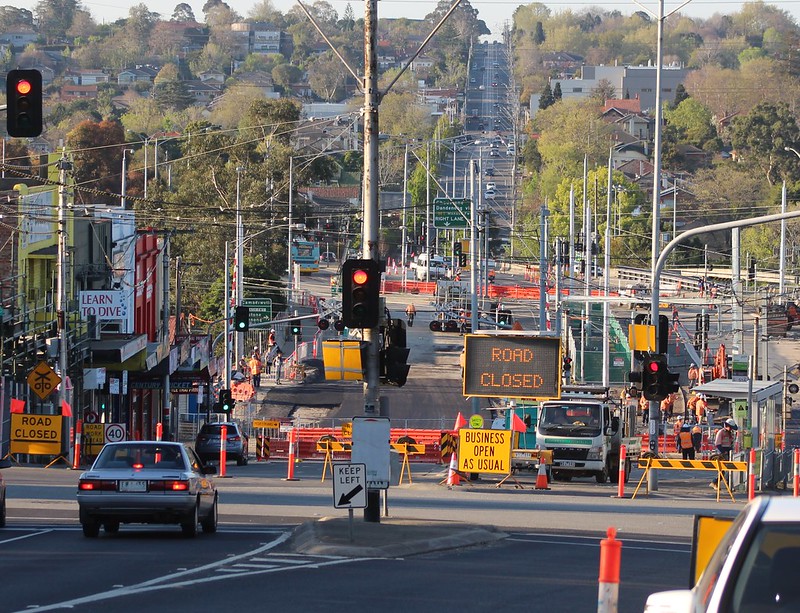 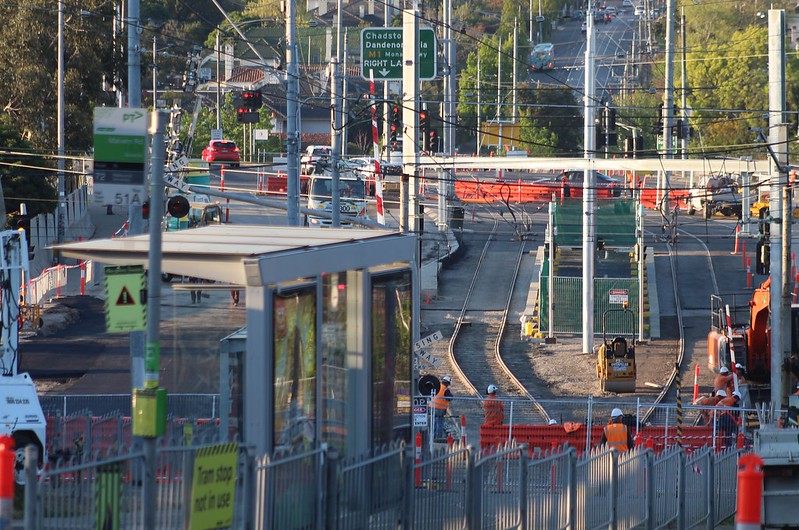 A new island tram platform stop is being built, which looks like it’ll be adjacent the new station entrance.

The plan is to close the rail line again over Christmas for about 4 weeks to do major construction and connect the new tracks, with the project mostly finished by mid-2016.

There were a few curious locals wandering about taking a look, and of course government propaganda signage reminding us why the project is being done. Despite this specific crossing removal having been funded last year before Labor was voted in, the Andrews government “Getting on with it!” slogan is used. 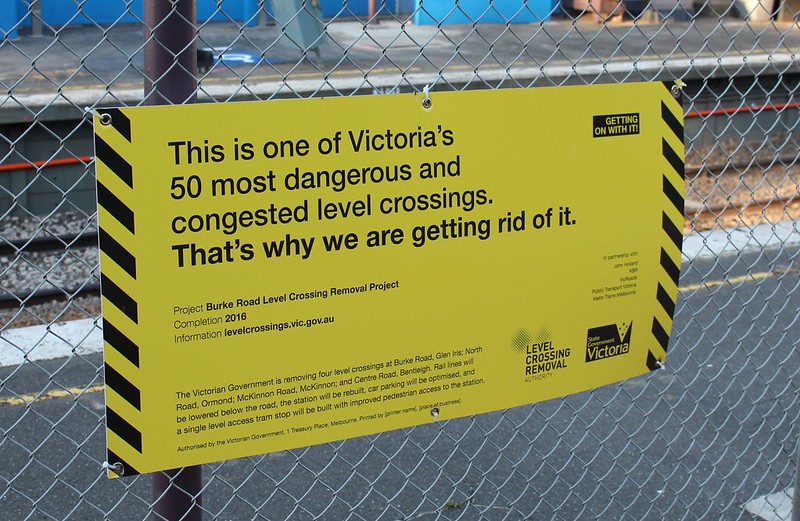 To be fair, the current government signed the contract, and while it’s not cheap, $534 million for four (an average of $133m each) has started to bring the average price back down after the $200 million price tag at St Albans. Hopefully this downward trend continues as more crossings are done.

The sign was of course authorised by the Victorian government, and printed by the good people at [printer name] in [place of business]. 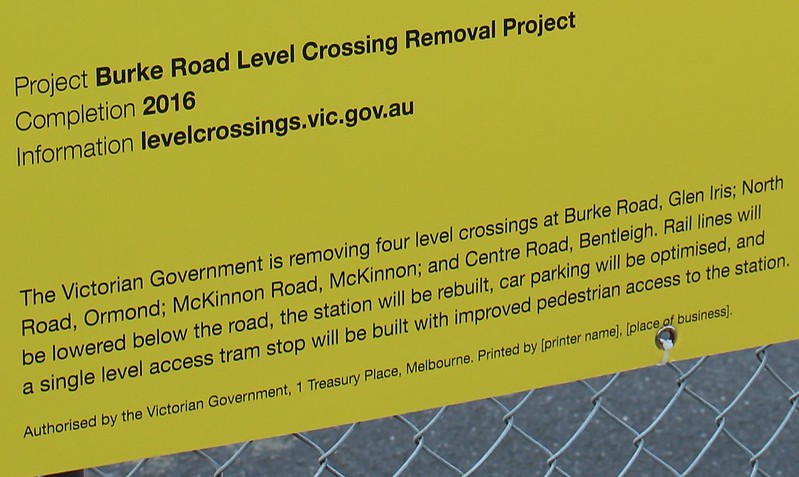 Anyway, it’s good to see the project proceeding. As an occasional motorist and tram passenger in the area, I know it regularly clogs up, and I’m sure train passengers will be happier when they no longer have to slow down to 15 kmh crossing the tram line.

thanks for the excellent update, with great action pictures. I had no idea it was such a major project nor that it cost so much for each crossing removal. Not sure why it costs so much!

I’ve visited the crossing a couple of times on weekends in the last year to have a look before and during the works. The shops were always dead – it seems to be a bit of a ghost strip, on weekends at least.

Thanks for the update

I suspect that the shopping strip there has not really recovered from the half of it on the other side of Burke Rd being demolished when Burke Rd was widened as part of the South Eastern Arterial construction in the late 1980s.

This is the freeway exit my parents have to come off when they are visiting me. Traffic does back up there trying to get off the freeway.

I still do not understand why we have such concerns with a high frequency train line level crossing, when having trams or buses at the same frequency does not cause a problem.

I understand that work has started on the St Albions crossing too over recent days. I wonder if that is to be done by next christmas?

Will there be a direct lift linking the tram platform and the trains?

What about grade separation for the passengers?

From looking at the scant details available it seems that tram passengers must cross the road to get to the station? I hope I’m wrong. Surely this would be a perfect opportunity for passenger tram/train interchange to occur via steps/lift/escalators from the central tram stop to the train platform below without needing to “wait for the lights”.

What benefit would there be, if every train that arrives, you have pedestrians who need to cross the road??

@TranzitJim: “I still do not understand why we have such concerns with a high frequency train line level crossing, when having trams or buses at the same frequency does not cause a problem.”

I’m sure if you think about it for a minute you’ll figure it out.

Trains have absolute priority, so they can lock up crossings unpredictably and for many minutes at a time.

Trams and buses generally don’t, so there’s a limit to their traffic signal cycle, even if arriving at high frequency.

Which is not to say trams and buses shouldn’t have better priority, but because they can stop more quickly than trains, it could be done without shutting down road crossings indefinitely if a bunch of them turn up at once.

[…] about a year of construction, the Burke Road (Gardiner) level crossing was finally removed in January. One of four train/tram […]