The tram stoppage is on today. From about 8:30 trams start heading back to depots, and won’t resume fully until about 3pm. Full details on the Yarra Trams web site, including precise last/first times, replacement services and alternative services.

As I’ve written before, getting around the CBD is actually not too hard without trams. Even on the best of days, it’s a good option if you don’t like the Free Tram Zone crowding.

I’ve tried to draw a map of the main routes — that is, a combined frequency of ten minutes or better (on weekdays… frustratingly, weekends are different). 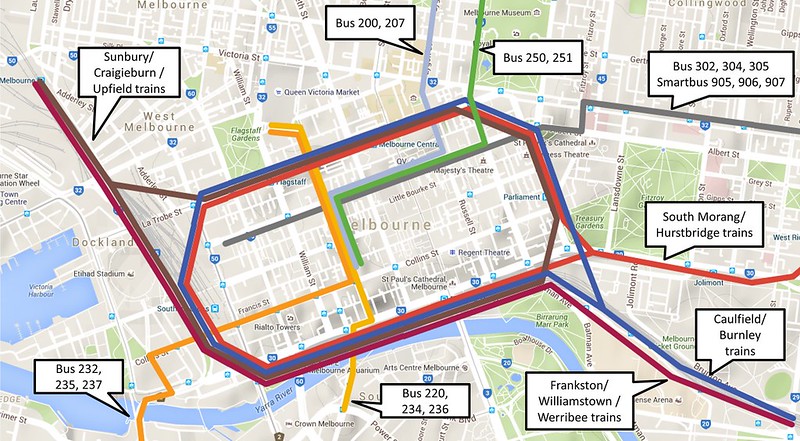 (Also: view it on Google Maps)

Around the edge of the CBD are the trains — obviously limited to stopping at the stations, but providing the quickest way to zip from end to end. The complicated bit is Loop direction, which changes for most of them in the middle of the day, but this PTUA guide summarises the changes quite nicely. (The Clifton Hill trains are the only ones that are consistently clockwise.)

What most people don’t know about is the buses. Along Queen Street, Lonsdale Street and several others, high-frequency buses operate. They’re all on routes with real-time information via the PTV and other apps, and at some stops as well. Even when the trams are running, they provide useful links across the CBD.

(Just today, during the tram stoppage, there are some special replacement buses. I deliberately haven’t put these on this map.) 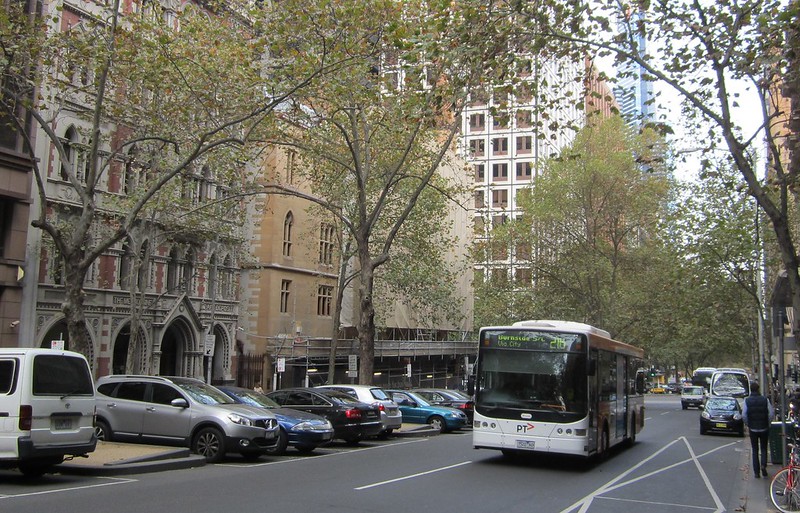 Of course the other alternative is simply to walk. On a nice day, it’s not so much of a hardship. The CBD is probably best seen on foot anyway, and it’s only about 20 minutes walk across the Hoddle Grid from Spencer to Spring Streets.

7 replies on “Getting around the CBD without the trams”

There’s also some other routes lime the 250/251 every 10 mins going from Lonsdale to Rathdowne St, and 402 from the corner of Nicholson and Victoria to Melbourne Uni and the hospital precinct

Yep, walking in the go on such as sunny day.

Your drawing curiously has three loops.

@Campbell, you’re right, I missed the 250/251. The 402 I knew about, but I was really concentrating on the Hoddle Grid (and it’s not frequent on weekends).

@mgm, 302/304 good point (305 as well?), though to be honest it’s easier just to remember the 90x Smartbuses, especially as they’re in a special livery, and together they run a pretty frequent service.

Can somebody tell me what the gripe is with YT workers?

It has been posted in BusAustralia, that tram drivers get $31.88 an hour at this moment?

Is Yarra Trams drivers after just a pay rise like it is reported as?