That moment when you’re talking about train disruptions, and one sneaks up behind you… 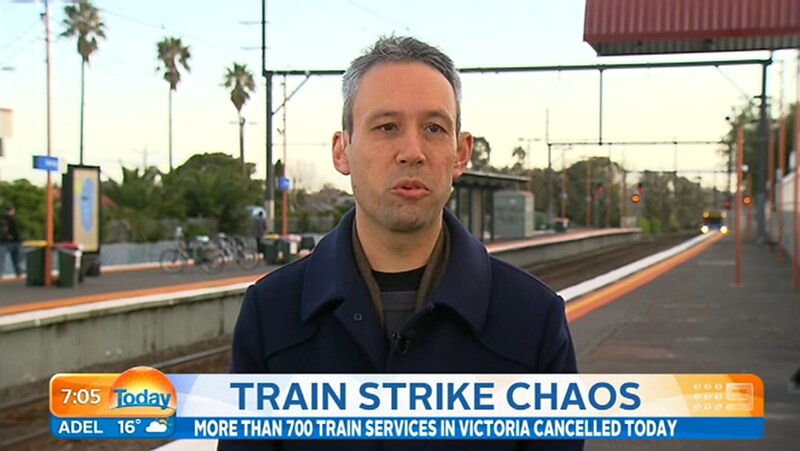 …but I think I bumbled my way through it okay.

So here we are. The first major industrial action on the train network since 1997, following a similar tram stoppage last week.

Trains begin shutting down from 8:17am — that’s the time some stations have last services, though many stations will still have service up to about an hour later. By 10am all trains will have stopped, and they won’t be back until after 2pm, but some stations may not have trains until after 3. Lots of detail on the Metro web site — but above this, there seem to be additional cancellations expected well into the afternoon and evening.

Apparently during the stoppage there are replacement buses running, but 320 buses organised in a rush can’t possibly cover adequately for an entire train network, especially when the road network is likely to be more congested (even though it appears to be a building industry RDO today). Note the buses don’t actually go into the CBD, but terminate on the outskirts. Presumably they don’t want them all caught in traffic snarls.

Neither Metro nor union are backing down. Metro clearly want to push their “five group railway” policy, which includes limiting driver training to specific lines. The union wants to protect that and other working conditions. And the public (and the community at large) are the meat in the sandwich.

The union argues that limiting qualifications is bad, and a possible safety risk. I can understand in principle that repetitive work could lead to complacency and safety issues, but I can’t reconcile that with the fact that numerous other rail systems across the world have drivers dedicated to specific lines — on radio yesterday Jon Faine said that London Underground drivers are trained in 22 weeks, for example, compared to 68 here.

There are other issues involved however, and it’s worth noting that multiple drivers have told me they didn’t want strike action – that was pushed by other parts of the union.

What happens next is anybody’s guess. Hopefully they can reach an agreement soon that sees fair conditions for workers, but also a more efficient reliable rail network — without more disruptions to services.

Congrats on getting on national live television! What a hoot!
To the union’s credit, the strike doesn’t appear to affect peak travel, for those (like me) who can catch an early train and leave the city for home after 5pm to 5:30.
It does show how unions protect “hard won” conditions and won’t let go.

Roger, Mr Daniel has been on TV many times. Not sure about live though.

In fact, the reason why I found Daniel’s blog is because I had seen him on TV many times!

#Jacob, I can’t recall Daniel being on NATIONAL TV before. Certainly not on a “breakfast” program. As I said, What a hoot!

PTUA doesn’t get much national media. It happens occasionally if something has parallels interstate, or is a Very Big Deal in Melbourne, such that it would be of interest to those interstate, but most of the coverage is state-based media.

Post from a train driver explaining some of the conditions at risk:
https://np.reddit.com/r/melbourne/comments/3ijwhj/metro_trains_staff_to_go_on_strike_on_friday_4th/cuhamwa

Do Metro get above or below $45 an hour?

I understand that to be the rate for those who drive trains along the ARTC?

I note the above link to the list of gripes, of which is quite informative. I shall respond once I have read them.

@Jim, but it’s not about the dollar amount. As the Reddit link above explains, as does this Age article, it’s about the work conditions.

Thanks, I have read the article in the above link.

On one side, I fully support Metro having drivers allocated to a specific group. It would take 4 hours to do the Pakenham and Cranbourne lines once each (to Dandenong twice), and doing that twice in an 8 hour shift can not be such a big deal, with a half hour break each time you arrive at Pakenham and Cranbourne.

I can not see there being a major safety issue in that respect.

On the other side, I strongly object to the other matters. A driver should only work from his home depot, and should always return back to that depot at the end of his/her shift. Furthermore, it is a serious safety flaw, if the driver is on call 24 hours a day, 7 days a week.