It’s Rail Safety Week, an annual event to highlight the importance of staying safe around trains. It’s an important issue, and the official video is well worth a look:

Back in 2012, The Age highlighted the issue of level crossing regulations which are illogical, and out of step with engineering practice as well as public perception.

Basically, many level crossings adjacent to stations with island platforms have independently operating pedestrian gates. The gates only close if a train is approaching on that track. The regulations say that it is illegal to cross through an open gate. The signage is similarly anachronistic.

So this is perfectly safe, but technically illegal: 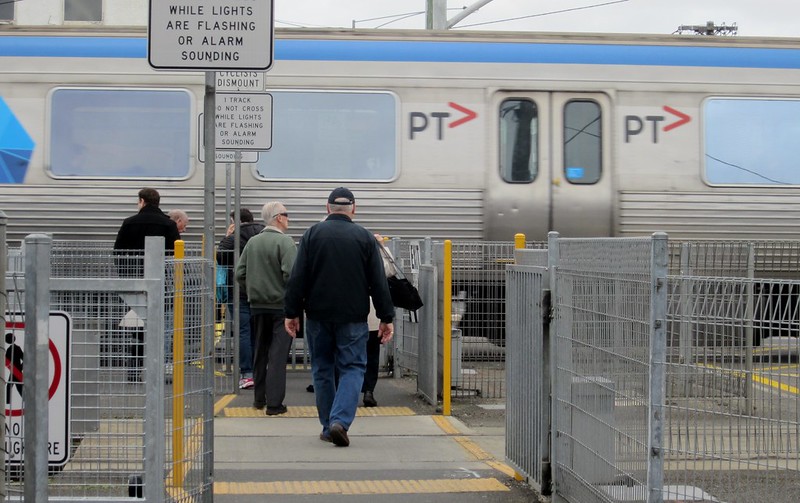 For Rail Safety Week, there is been an increased police presence at numerous level crossings. On Wednesday morning at Bentleigh, two police were watching pedestrians cross. Thankfully in line with common sense, they did not book people for crossing through an open pedestrian gate when another road boom gates were closed.

But as the 2012 Age article noted, some people have been fined for it in the past.

The law still needs reform. Obviously it should continue to be illegal for dangerous acts, but it shouldn’t be illegal to cross in a safe manner.

And in fact the government just did a review of precisely these regulations: the Transport (Compliance and Miscellaneous) (Conduct on Public Transport) Regulations. The revised regulations took effect in June.

The PTUA and other organisations submitted comments to the review — you can read a summary of the comments and responses from the department here. The PTUA specifically suggested this regulation be modified…

From the response, it appears they now understand there’s a problem, but are still trying to figure out how to change the regulations. 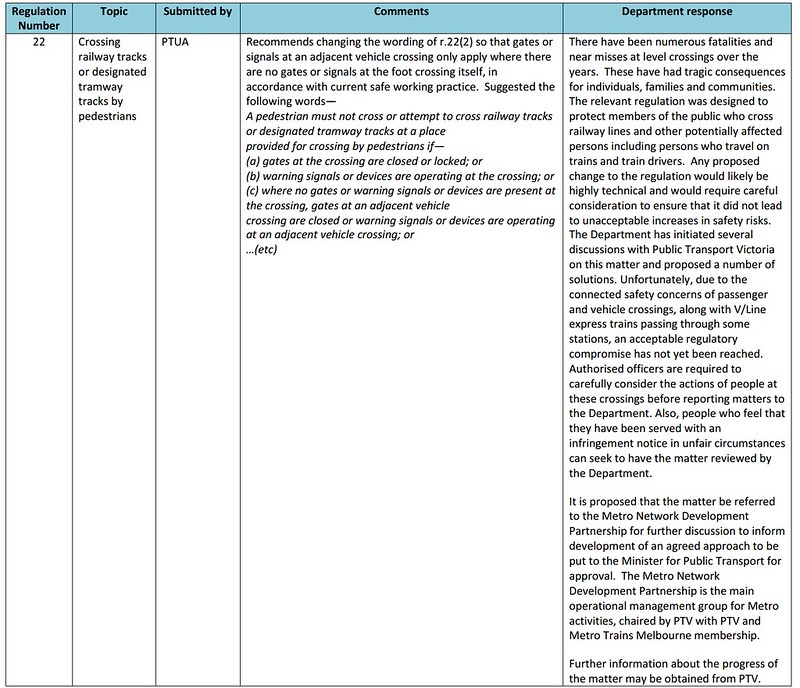 Even recognising the issue is progress. I guess the wheels of government move slowly.

Other notable points as I read through the regulations and the notes on the changes:

6 replies on “That anachronistic level crossing regulation came up for review. It hasn’t been changed (yet)”

Daniel
You raise a good issue. I guess it’s more relevant for stations with centre platform(s) or more than two tracks. Otherwise, there is no ambiguity – if there’s a train coming (warning lights/sounds) you don’t cross.
BTW, nice job of not showing the faces of the “law breakers”.
With regard motorists parking in PT car parks, my station Brighton Beach is near a building site. At 6:30 every weekday morning, hordes of orange-vested men arrive (in individual cars), park at the station and wander off to their work site. I (self righteously) walk to the station!

Apparently, a few people got booked at Glenhuntly early this week but last night I watched Police watch pedestrians crossing through the open gates. So maybe they realised they were being silly.

My personal opinion is that there are 2 parallel reasons why crossing there should be argued as legal:
1) I believe there are 3 crossings there. A vehicular one and 2 pedestrian ones. The pedestrian gates have their own siren that is different from the bells used for the cars. If the crossing is closed because of an up train and a down train approaches and the other set of gates starts to close, you can hear the extra warning tone. So I’d argue that there are 3 independent crossings and the absence of that siren means that with gates open and no siren operating, you’re perfectly entitled to cross. I’d love to see that argument put to a court.

2) There is an exception in the law that says you can cross a crossing if instructed/permitted to by an approved person. eg if the gates were broken and stuck down, Metro or PTV or PSO (not 100% sure) staff/AOs/officers can allow you to cross. In the same way that police can allow cars and pedestrians through red lights at broken intersections. In the case of Glenhuntly, the gates are operated (triggered) manually (at least for closing, they appear to open automatically). Sometimes the citybound gates (and car crossing if it’s not already closed) operate when the train is not even visible yet. Closer to Ormond than Glenhuntly. That’s when the operator is in “by the book mode” – that’s the size of the block and would make sense if the train was doing 80km/h. But it’s not. It’s doing 30 and slowing. Other times, the train has come to a stop in the station before the gates have closed. The usual practice is for the operator to close the the gates when the train is just entering the platform. Often, in the evenings in particular, there are times when both sides of the crossing are closed. Often the citybound train will clear the intersection while an outbound approaches and the gates leading to the carpark will open. If that is not a clear sign from a Metro/PTV person that you are now permitted to cross, then what is it? Why else open the gates if not to indicate to the people that the status of the crossing has changed?

I have chatted to AOs at Glenhuntly about this a few times and they are very practical about it. They acknowledge that it’s technically illegal but that it would be silly to book people. They want people to be safe and people are being safe. They get upset if you go around the gates or through the emergency exit backwards but they openly agree that people are permitted to cross through open gates when the crossing is closed unhindered. Unfortunately, if one of them decided to go by the book and not honour that position, you’d have very little of a leg to stand on. Unless you had the time and money to challenge in court and could make one of the two arguments above stick.

That departmental response seem blissfully unaware of the manner in which those gates have been set to operate. If risks abound, such as “V/Line express trains passing through some stations”, then it must be negligent of the government to have allowed the construction of a crossing which allows pedestrians onto a track when a train is about to pass. Obviously the equipment has been designed and built to keep the pedestrians out of the way of the trains, so either the law needs to change to suit the properly installed equipment, or the equipment has to be modified to be as inflexible as the current law.

To continue to use equipment which encourages people to break the law is not right. It of course is legal, because the law is carefully written such that ignorance of the law is no defence, but that doesn’t make it right.

The department’s position is stupid, of course. It’s a simple hierarchy of controls.

I would suspect the issue is that 1) they don’t see it as a problem (they won’t get booked, and it can be handled by AOs/PSOs being sensible), and 2) the public servants concerned don’t understand how level crossing protection has been implemented.

Oh, and I should have said…

If any crossings do *not* work in accordance with that simple hierarchy, they are seriously dangerous, and should be fixed pronto. To use the words of the RIS, this could have “tragic consequences for individuals, families, and communities” as the hierarchy reflects how the crossings are used by the public.

I cross tram platforms all the time when in town, using your suggestion of a normal tram length from an intersection. Do I have this correct? A penalty unit is nearly $160 x 20 equals a $3200 fine for crossing from one platform to another?