Once in a blue moon I’ll buy a copy of Modern Railways. It’s a Brit magazine which — although it does feature full-colour photos of trains — isn’t really a trainspotter mag. At least, that’s what I keep telling myself.

It highlights developments in railways in Britain, and the other week I noticed the May edition in the newsagent, and bought it thanks to several relevant articles that looked worth reading, with lessons for Melbourne. 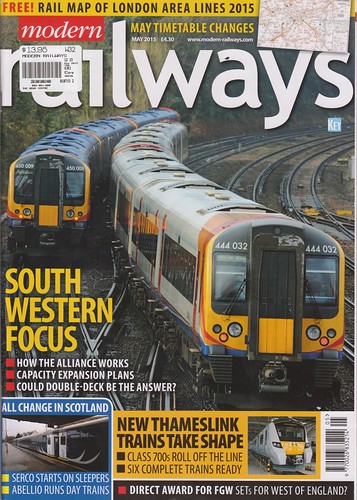 Double-decker trains — an interesting article looks at the pros and cons, and concludes that they are best used where dwell times are not a big concern, such as railway lines that are not high frequency, where there are a limited number of stops.

Alliance — explains this method of project management (at least, as used in the UK), which is relevant because it’s being used a lot here.

Would you believe it’s got a centrefold? Yep, of London track diagrams — for the Underground and National Rail lines. It’s a sampler from a full London rail atlas, but covers most of inner London. Very cool. It’s interesting to see how segregated the Underground lines are, but that cross-platform transfers are provided in a number of places. They also wisely have numerous locations where they can reverse trains.

London sub-surface resignalling delay — problems implementing CBTC (communications-based train control, also known in Melbourne as high-capacity signalling). The original contract with Bombardier has been cancelled, and Thales are stepping in instead, at a higher price. (Read about it here or this report from this week.)

We can learn from other jurisdictions — not just in the English speaking world, I might add — so it’s useful to keep an eye on what’s happening elsewhere in the world.

At least, that’s my excuse for buying a magazine with trains on the cover.

7 replies on “Learning from elsewhere”

“cross-platform transfers”.
Very common in London. They often involve negotiating several sets of hugely long escalators and tramping along half a kilometer of tunnels. But they work. Shame we apparently can’t have a passenger transfer between South Yarra station and the new Metro rail-link.
And it’s OK, Daniel, everyone is allowed a guilty pleasure!

@Roger – to be a nitpicker, a cross platform transfer is where trains on two lines stop either side of a single platform, so you don’t have to walk up hill and down dale through interchange walkways.

@Marcus. You’re not a nitpicker. You’re just exposing my (gross) ignorance! Thanks.

Lots of “cross-platform” transfers in various Japanese cities, too – very convenient, except the time I got out the wrong side on a bay, and the doors closed, and I had to run up and over to get to the right side and just made it!

Thanks Daniel, and yes there’s much to learn from London’s experience with major rail projects, and from elsewhere.

Double-decker trains will be incredibly difficult to achieve in London (on the SW route) as it will involve rebuilding multiple bridges, flyovers and tunnels. The solution is expected to be Crossrail 2: a second huge cross-city tunnel. Bearing in mind that Crossrail 1 (due to open in 2018) is the largest construction project in Europe, it’s easy to understand the challenges getting Crossrail 2 beyond the drawing board. But London’s growth requires it.

And yes the high-capacity signalling programs have been deeply problematic, which should ring alarm bells for Melbourne’s current strategy. It is one of the reasons I’ve proposed an alternative on the Urbanist blog.

It is interesting how they went for a conventional railway underground, rather than to expand any of the existing underground railways. The Subsurface underground, the worlds oldest, has full sized trains, but is not seen as good enough to expand under London.

Would we see the day when all of the underground lines are replaced by full sized conventional or mainline railway trains?

There is no doubt as to the capacity increase if they did that to the 7x deep tube lines.

They went with full sized railways in tunnels to reduce transfers and thus allow the distance travellable in a given time to increase and thus increase the area to which the project is useful.

Tunnelling costs, with modern TBMs, might not scale with size in the way they did in the early 20th Century. They original early 20th narrow tubes were also built by private companies seeking to make a profit without massive government subsidy.

Several of the (mostly newer) tube lines can take bigger trains than they actually do because they were built with allowance for that. However, London is very attached to its tube train design, despite is limitations for non-short people standing near the doors.