To their credit, the state government is initiating Stakeholder Liaison Groups for the level crossing eliminations to happen across Melbourne.

The first of these covers the three Bentleigh area crossings: North Road, Ormond; Mckinnon Road, Mckinnon; Centre Road, Bentleigh. It’s convened by local MP Nick Staikos, and members include representatives from local traders, schools, community groups and public transport users. The latter is myself, as a local and with my PTUA hat on. (Note it’s not a group just for interested individuals — there are public forums for that — see below.) 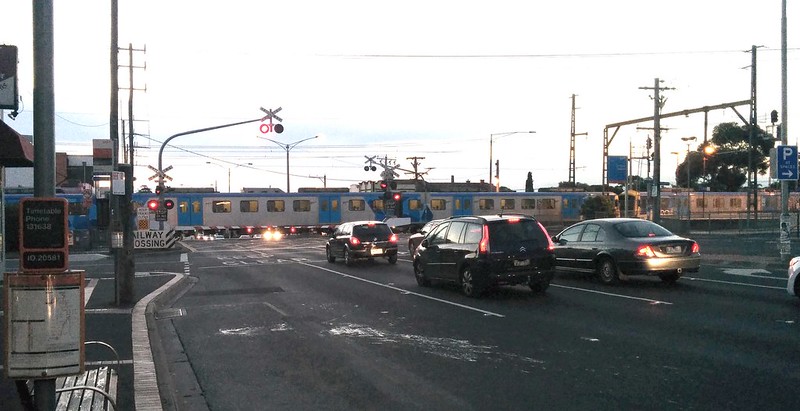 The first meeting occurred last week, with an overview briefing from the Level Crossing Removal Authority and contractor John Holland. The representatives at the meeting were very helpful, gave a lot of information and took a lot of questions.

Below I’m going to dump a bunch of notes — both information conveyed at the meeting, and some comments from me thrown in as well.

Any errors, misunderstandings or omissions in the information below are my own.

While part of the role of group members is to share project information out to those in the community who are interested, I should emphasise that I do not speak on behalf of the Stakeholder Liaison Group, or any other members. And any journalists reading who want more information should seek it from the Level Crossing Removal Authority (LXRA).

The pledge was for twenty crossings in this term of government, thirty the next. (The full list is here — most of them make sense with the possible exception of Werribee Street in Werribee, unless the Metro line is extended through to Wyndham Vale.)

In the Bentleigh area, three plus Burke Road, Glen Iris were awarded to John Holland and friends at a cost of $524 million.

Two in St Albans (Main and Furlong Roads), Blackburn Road, Blackburn, and Heatherdale Road, Heatherdale were awarded to Leighton and friends at a cost of $480 million (including a Commonwealth contribution of $151 million).

Add the nine along the Dandenong line (yet to be awarded, but there is a shortlist just announced), and that’s seventeen of the twenty, with the next three yet to be determined.

The Bentleigh area grade separations is the focus of the rest of this blog post.

This project (and I think the others also) is handled by what’s termed an alliance, consisting of: LXRA, VicRoads, PTV, John Holland, KBR Construction (the designer) and Metro. 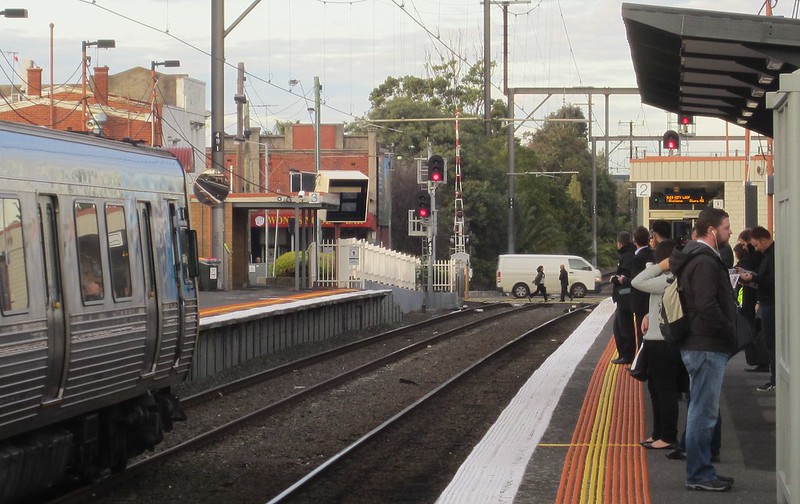 For better or worse, all three grade separations will be rail under road. (I hope they are actively considering other options which may provide better community outcomes more cheaply, but given the Ormond design had already advanced considerably last year, I’m not surprised all three will take this option.)

There’s to be no net loss of station parking. Some parking will need to be rebuilt, and apparently the standards now are different, with bigger spaces, so they are looking at options such as increasing spaces at Glenhuntly to make up for any loss of spaces at the rebuilt stations. This may be an issue with other grade separation projects as well.

The Dorothy Avenue underpass (midway between Ormond and Glenhuntly) will become pedestrian/cycle only. — Update: This was changed; it will remain as-is. See update links below.

To my surprise, between stations the line will come pretty much back up to ground level. One of the main reasons for this is the high water table — some fairly elaborate designs are being used to ensure drainage isn’t made any worse, and this includes identifying paths for water flow underneath the railway line, and technology to keep water out of the railway alignment where the line is below the water table.

This also helps them with the various underground utilities which either have to be avoided or moved (expensive!).

Brighton sands are also likely to cause some challenges during excavation. (See also: Melbourne geology.)

All this should serve as a reminder that elevated rail may be a better/cheaper option at some locations.

The grade of the line will be no more than 2%, to allow freight trains to continue to use it.

With the track at ground level near Murray Road (between Ormond and Mckinnon), the hope of a pedestrian crossing of the railway line appears to be dashed. They are resistant to an at-grade pedestrian crossing due to safety risks, and an overpass would have very long ramps due to DDA (Disability Discrimination Act) requirements. And I’m sure they suggested the ramps would stretch almost back to North Road. Hmmm.

Impressive sounding statistics: They’ll remove a lot of earth during the construction, with some 280,000 cubic metres taken out, and bring in 12,000 cubic metres of concrete. It’s a big project.

Indicative plan for Mckinnon station from May 2015. Subject to change.

Ramps, lifts and steps likely at all three stations.

Three tracks maintained, with “passive provision” for a later fourth track (which similar to Springvale, seems to mean not building anything in the way of it).

Mckinnon and Bentleigh to have retail shop frontages built into the structures.

It appears bus stops will be moved closer to station entrances, which is good, though it sounds like precise locations haven’t been finalised. This is particularly an issue at Bentleigh presently, where westbound bus stops are awkwardly placed, and at both Mckinnon and Bentleigh there is no nearby pedestrian crossing to access them — with the new designs, there will be pedestrian crossings directly outside the station entrances.

I wonder if it would make sense to re-route bus 625 at Ormond — at present it runs eastbound via schools in Leila Road, but westbound via North Road, probably because the lack of traffic lights makes it impossible to make the westbound trip via Leila Road.

Interestingly the Ormond traders may campaign for a lower speed limit on North Road once the level crossing is gone, so their shops aren’t a blur in motorists’ windows as they pass. This makes sense as a traffic calming measure — the Bentleigh shopping centre is a 40 zone from 7am-7pm, and Mckinnon has no signage, and therefore is 50 (the default speed limit in built-up areas — though I suspect many people treat it as if the limit is 60). It sounds like VicRoads is resistant to a lower limit on North Road though. It’s now 60, though once was 70… but it is flagged under the SmartRoads scheme as a priority pedestrian area, though it’s also part of a preferred traffic route.

There will be limited provision for possible future decking of the rail line. (I would note that while this is often talked about, there so far have only been very limited examples where it’s actually proven to be economically viable.)

Bentleigh, being a Premium station, will get Myki fare gates. Ormond, being a Host Station, will get provision for future Premium status, including gates, but for now will have standalone Myki readers. Mckinnon (neither Premium nor Host, though you sometimes see Host staff on duty there) will have standalone Myki readers and it sounds like it may have only limited provision for later upgrade.

One consequence of the gradients is that the station platforms will go under the roads, which helps provide extra weather cover.

I asked if it also allowed the option of an extra station entrance on the other (southern) side of the road. Initially they cited DDA requirements — the need for more long ramps and lifts. I pointed out that DDA access was via the other entrance. After all, not all access points into a station (or any other building) need to be DDA-compliant, otherwise stairs would no longer be allowed, at all. They changed tack and said that a second entrance causes issues with sight lines for passive surveillance for staff (including PSOs), as well as staffing issues for gates. They may have a point.

(There are times when it seems to me that DDA is used by some organisations as a convenient way of dismissing an option that they don’t want to provide.)

Indicative plan for Bentleigh station from May 2015. Subject to change.

Traffic modelling tells them chaos would break out if they tried to close North and Centre Roads at the same time. Fair enough. Instead, they’ll stage things in such a way that at least one of them is open.

They’re also wary of closing half of North Road at a time and building the overpass in halves… it sounds like it has more cons than pros.

There are likely to be numerous weekend closures over the life of the project. During road closures, it’s likely that pedestrian access will be made available across the tracks (after all, trains won’t be running). Obviously buses will need to be re-routed as well, and they’re in discussions with bus companies about this.

So, the indicative schedule at the moment is:

Note: the schedule was later modified, with the major construction during July 2016, and completion of the project in late 2016. 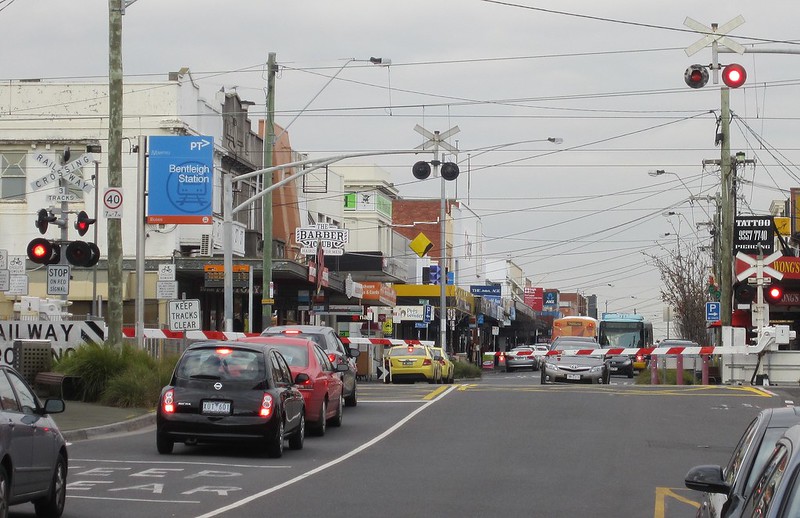 Where to from here?

All these details are of course subject to change as planning progresses.

A public forum has been set up: 7pm Wednesday 29th July, at Mckinnon Secondary College.

It’s not confirmed yet, but I believe the plan is for a drop-in info session the next day, or soon afterwards. I’ll post details here when that’s confirmed.

It’s exciting to see this project (and others) moving ahead. Removing the level crossings really will make a difference — whether you’re on foot, on a bicycle, in a car or a bus. I can’t tell you the number of times I’ve missed my train due to a long wait at the gates.

How they handle the disruptions of course will be critical, especially for the extended closure of the stations and rail line.