We’re starting to learn a lot more about the proposed next generation of trains for Melbourne’s suburban rail network — known in the biz by the acronym “HCMTs” — High Capacity Metro Trains.

The rolling stock strategy released in May had some detail — and more has been revealed by an Expression Of Interest document put out last week — I’ve managed to get a copy.

So here’s what we know about what the government wants:

That’s enough trains to run the entire Cranbourne/Pakenham (aka Dandenong) line — via the Loop, eg the configuration until the Melbourne Metro Rail Tunnel (which by the way seems to be going by the acronym MMRT) comes into service. 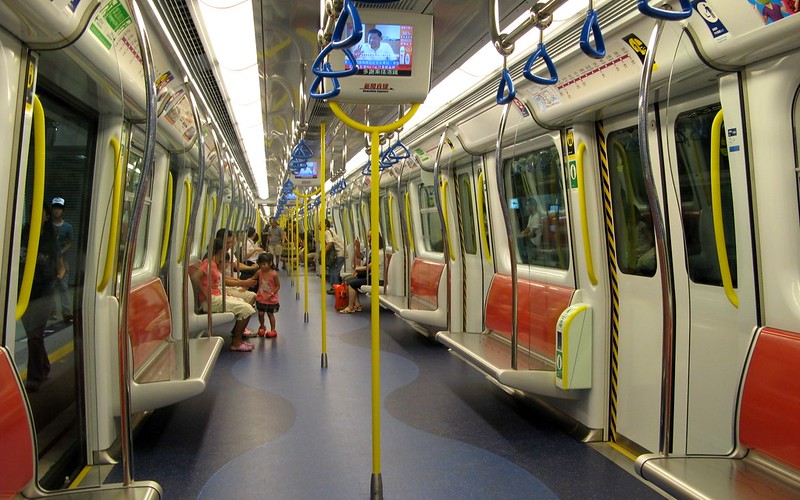 Interior of Hong Kong MTR 1900/1950 train. Source: Wikipedia. I’d expect our new trains to have more seats than this.

The trains/depot project accompanies the level crossing removals between Caulfield and Dandenong, so they can run very frequent trains without impacting road users, as well as other works such as signalling, platform extensions and power upgrades.

Of course the Siemens and Comeng trains currently running on the Dandenong line will move to other lines. And they’ve also recently funded 6 new X’Trapolis trains, as well as a $75 million “life extension” upgrade for Comeng trains on other lines.

HCMTs will cater for an average load of up to 1100 people. It sounds like this would become the new “load standard” (currently 798) for this part of the fleet.

The actual “gross” capacity would be 1380 — that’s with 40% (552) seated, plus 4 passengers standing per square metre), but with potential “extended” (more carriages) and “crush” (fewer seats) configurations — see below.

They want the contract signed by end of 2016, prototype mock-up trains by early 2017, and the first train on the rails from late 2018 — presumably just in time for the 2018 election.

Money starts flowing from the state to the PPP operator once the fifth train is delivered.

At least 50% local content (design and manufacture), which obviously supports jobs. And obviously there will be ongoing maintenance jobs where the new depot will be at Pakenham East.

Project delivered as an “availability-based” PPP, which includes the HCMTs and the TMF and ongoing maintenance. 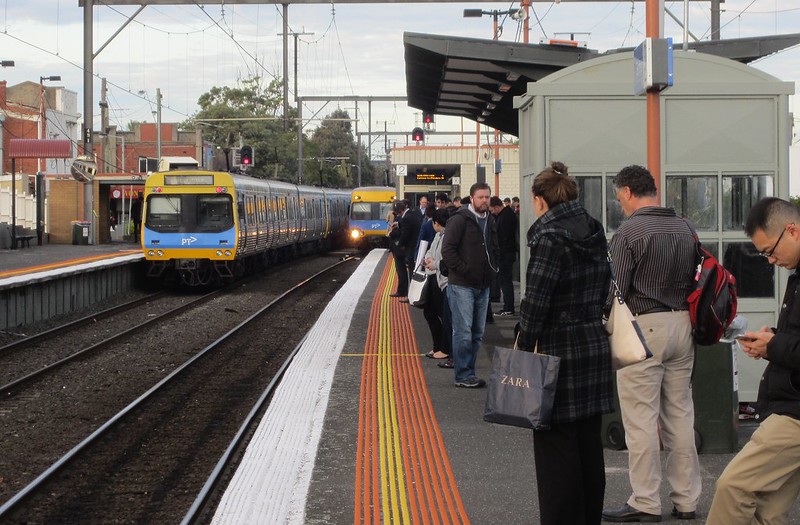 Comeng trains. These will have upgrades to keep them going, but the oldest will start to be retired next decade.

Anticipated expansion of the order at a later stage. Over time it would be the intitial 37 HCMTs for the Dandenong line, another 25 for the Sunbury line when the two are linked/through-routed by the Melbourne Metro Rail Tunnel. On top of that, another 38 (making a total of 100) to allow retirement of the oldest Comeng trains mid next decade, while still boosting overall fleet carrying capacity.

Of the initial fleet of 37, they want 35 available to run the Dandenong line peak service, and 24 available at off-peak times (including weekends). Potential for 24 hour service, though initially planned for 19 hours/7 day service, 150,000 km per annum.

Based on current round-trip times, I make that roughly a train every 4 minutes in peak, every 6 minutes off-peak.

In terms of reliability, they want 50,000 kilometres between failures (going by the lovely acronym MDBSAF — Mean Distance Between Service Affecting Failure) of three minutes, and asset availability over 95%, with a performance regime for that, with incentives and penalties.

The depot Train Maintenance Facility needs to have capacity for 40 trains initially, with provision to expand to 80 extended trains.

The depot stabling needs capacity for 18 trains initially, provision for up to 30 extended trains. The PPP will construct the stabling, but not manage it (unlike the TMF). There’s state land east of Ryan Road, between the railway line and the Princes Freeway, which is where it will be.

The trains will initially be 7 cars, “semi-permanently” coupled together, with a maximum length of 160 metres.

They want provision to be able to extend them to 9 or 10 cars (230ish metres), to cater for 1570 people. Obviously this will require platform extensions. The Melbourne Metro Rail Tunnel will be built with long platforms, and recently rebuilt stations such as Springvale, Footscray and West Footscray all have provision for them. No doubt designs for the stations to rebuilt with grade separation will also include provision.

But they also want an option of a reduced length train, which can later be expanded to the 7 or 9-10 car configuration. Not really clear on why this is.

Unlike the current fleet (which is designed to quickly configure trains as 3 or 6 cars), these will have no intermediate cabs. Walk through access all the way along, as seen on trains in places such as Hong Kong.

And yes, they definitely want them single deck, not double deck. (Check this ABC Fact Check from last year for some good material on the debate around capacity.)

Acceleration of at least 1.1 metres per second squared up to 35 km/h (but not greater than 1.3). Similar braking speeds. Maximum speed 130 km/h. One of the benefits of running a single type of train on the Dandenong line is to maximise throughput/capacity.

They want at least the same performance in the Shortened or Extended configuration.

While initially planned to be deployed on the Dandenong line, they need to be compatible with the entire rail network, and they will run in mixed traffic with other types of trains. 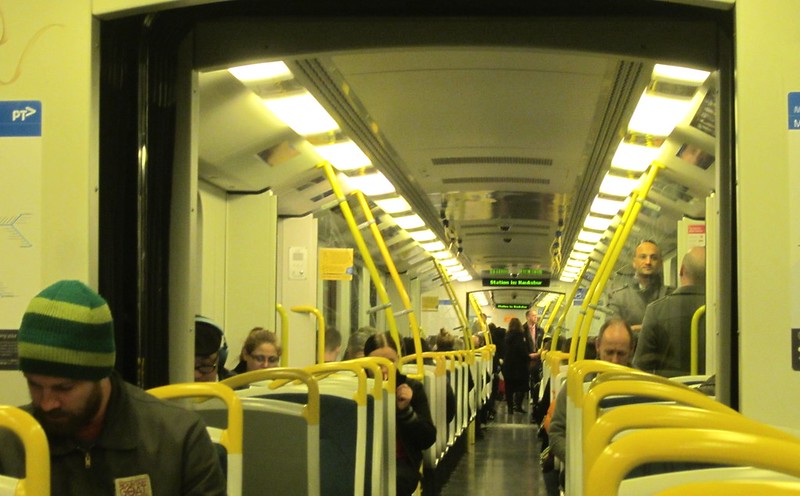 Siemens trains have a walk-through design, but fewer doors and more seats than the new fleet will have. Not to mention far too few handholds and grab rails.

End couplings compatible with other trains and locomotives (possibly with an adaptor) for recovery purposes, but otherwise not visible.

Seating that is reconfigurable relatively quickly, such that they can change it later at the rate of one train per week, with the train able to carry crush loads if the seating was reduced from 40% to 30% of passenger numbers.

They haven’t directly specified the number of doors, but have said the number, location and size need to support dwell times of 40 seconds based on up to passenger alight/board of up to 1100 people at a busy station.

They also want automated systems to estimate passenger numbers… which I’m speculating might allow for later platform information advising passengers which carriages of the approaching trains have more space in them.

Provision for bicycles in non-cab cars.

Handholds/grab rails — at least one available for each standing passenger.

External destination displays on the ends of the trains, and every second car along the side. Internal displays in each carriage.

Internal CCTV, of course, kept for at least 14 days. Intercom and alert systems.

Safeguards to ensure the train doesn’t move unless doors are closed and locked.

Train able to handle power between 1300-1800 volts, and degraded performance down to 1000 volts and up to 1950 volts. Ever get the feeling that the power supplies are becoming a big issue on our aging rail network?

Air-conditioning rated for conditions of up to 46 degrees. Provision for future WiFi.

It’s going to be interesting to see how this develops. Sounds like we’ll be seeing quite a modern design of train, in line with the practice of busy Big City metro systems worldwide… just the thing we’re increasingly going to need on our busy rail system.