Last year the Coalition announced they were going ahead with an unsolicited proposal: to upgrade the Dandenong line. In summary, it included: grade separation of 4 level crossings, 3 stations associated with those rebuilt, planning and early works on 5 more grade separations, high capacity signalling, 25 new trains, a maintenance depot at Pakenham, and power upgrades.

On Tuesday the Labor government announced that they’d scrapped the Coalition’s plan, and were going ahead with a bigger version: grade separation of 9 level crossings, 5 new stations rebuilt, 37 new trains, a maintenance depot at Pakenham, power upgrades, and a high capacity signalling trial on the Sandringham line instead, ahead of a rollout across the rest of the network. 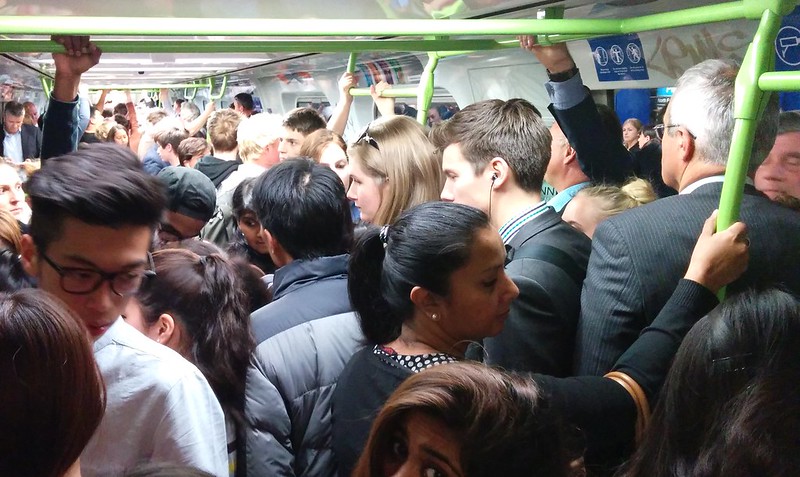 By most measures, the Dandenong line is the most crowded on the network, and is likely to get worse as it serves a growth corridor. Unlike the western suburbs lines, which are about to get a boost via Regional Rail Link, to date there’s been no substantial work undertaken to relieve it.

Timetable changes a couple of years ago provided some relief, but the May 2014 load surveys showed that in both AM and PM peak, crowding has got worse in the past year, with 35% to 44% of passengers travelling on trains above the “benchmark” crowding figure. 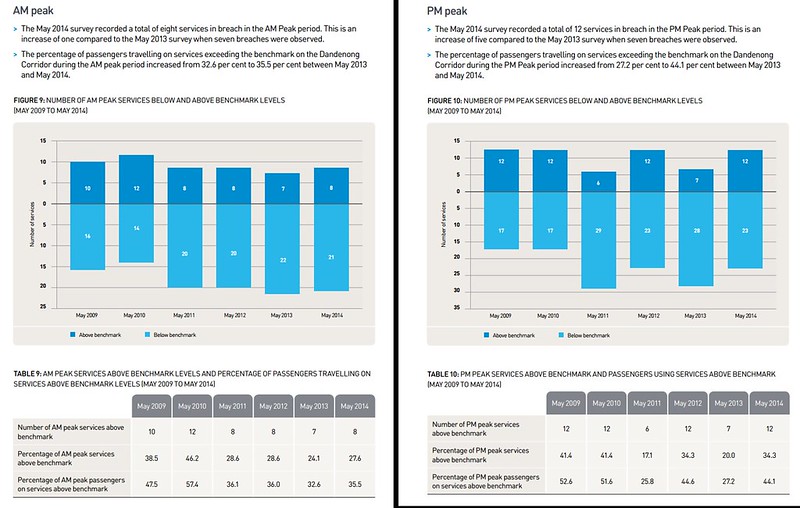 What’s in the revised project?

Level crossing grade separations: Coalition 4; Labor 9: the revised plan will see removal of all the level crossings between Caulfield and Dandenong, making the entire line from the City Loop to Dandenong crossing-free. Note that all the crossings were on Labor’s list of 50 that they took to the election.

One thing evident from last year’s plan (and from the completed rebuild at Springvale) was that it was to include some planning for future track expansion. I’m told this is continuing. They are working out where extra tracks could go in the future, and not necessarily demolishing buildings right now (pointless if the land may not be needed for decades), but certainly not allowing new ones up that would get in the way. You might see carparking or other uses for the land, but no new buildings — similar to VicRoads and their overlays in places like Punt Road.

New trains: Coalition 25; Labor 37. These will be a new design, a so-called “high capacity” model, carrying 20% more passengers than the current models. They’ll be a bit longer than the current 6-car trains, probably fitting more snugly into the platforms in the City Loop. I’d expect they’d have more doors, more efficient seating layouts, and no centre driver cabs (largely unused these days).

The key change is the number — 37 will be enough to run the entire Dandenong/Cranbourne/Pakenham line with one train type, meaning more consistent running times and loading times. As I said at the time, 25 wasn’t enough; it would have been messy running a mix.

The government is also promising at least 50% local content. Expressions of Interest will be sought in May, so they want to move pretty quickly. Presumably the frontrunners would be the two companies with train manufacturing facilities in Victoria: Alstom at Ballarat, and Bombardier in Dandenong. (The recent small X’Trapolis order was said to be enough to help keep Alstom going at least until this new procurement process is underway, so there are at least two viable bidders.)

Maintenance depot at Pakenham: It makes sense to have a depot out at the end of one of the lines, so the new trains don’t have to travel long distances out-of-service for maintenance. It also helps support local jobs, which would be welcome for the area.

Signalling: We’re back to the PTV plan for the Sandringham line to get the first trial with High Capacity Signalling (also known as, depending on precisely what you’re talking about, moving block, or Communications-based train control — CBTC for short). That line is almost completely isolated from the rest of the network, particularly V/Line and freight trains, so it will be easier to test the technology with a lower risk of a huge SNAFU taking out a whole rail line.

It will mean whatever trains will run on the Sandringham line will need HCS equipment, though it’s unclear if that would include a dedicated fleet. Perhaps more likely it’ll be modifications to existing trains, with enough flexibility that they’re not tied to that line.

The wish to trial HCS first might be related to the delay in the emergence of a definitive standard for this type of technology, and rumoured disagreements between the various players about precisely which technology from which company should be adopted. It’s a complicated area.

It’s important to note the Dandenong line will still get a signalling upgrade. It won’t be HCS/CBTC, but it will be modern conventional signalling. The view recently (such as on Regional Rail Link) has been that when a line is rebuilt (as parts of the Sunbury line were), the ageing electrical and signalling equipment is ripped out and replaced with new stuff, which is more reliable once installed, and has better provision for future upgrades. I’d assume we will see the whole line from the City to Dandenong allowing a train every 2 minutes (currently 3 minutes). Usually the practical maximum is 80% of the theoretical capacity, so that would allowing about 24 trains per hour — currently the line has about 15 + 2 V/Lines in the busiest hour.

Of course a rail line runs most smoothly if no messy junctions are used on the most frequent part of the network. The logical consequence of this is that the remaining Frankston Loop trains will be altered to run direct into Flinders Street, but this hasn’t been specifically stated yet. I wonder if consideration has be given to a flying junction (that’s gunzel talk for grade-separated) where the Cranbourne and Pakenham lines meet?

I’m told V/Line trains will continue to run all the way into the City. No current plans to terminate them at Pakenham.

The upgrade is independent of the Metro Rail Tunnel project. I’m not sure exactly how they calculated it, but the government say the changes will boost total capacity by 42%, even without the tunnel. Indeed, the tunnel really only increases usable track capacity from the west, though given the Dandenong line would use it, it would allow the Frankston line back into the Loop.

The government claims delivery of the various upgrades would be in the period 2016-2018, which sounds quite ambitious to me. No doubt they want things well underway or preferably finished by the 2018 election. 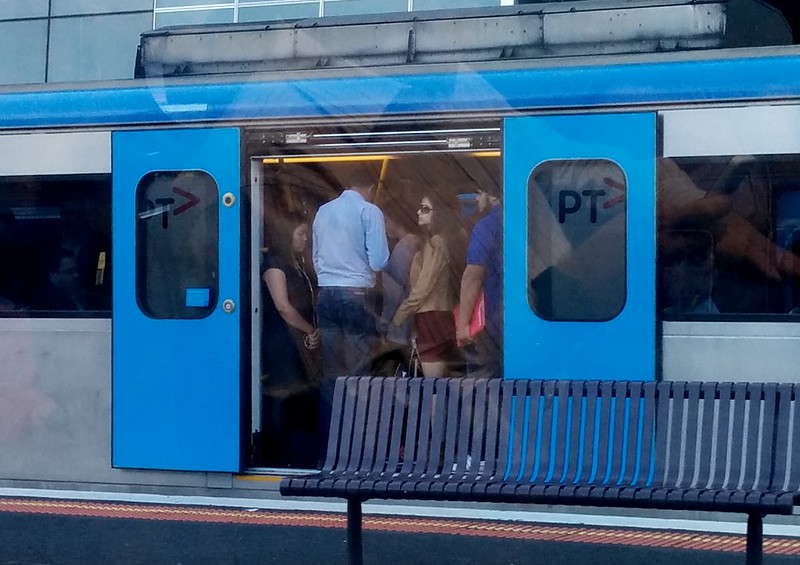 Much the same as last time. Duplication of the Cranbourne line, which still has about 10km of single track. It hasn’t been included in the project scope, but must be done if cascading delays are to be avoided. It’ll be a ridiculous situation if billions is spent, but a single little delay near Cranbourne can still easily jeopardise services on the whole line.

Also missing is any word of a revamp of connecting bus services, with more Smartbus-like services feeding into the stations. The key to having a rail line live up to its potential is ensuring people can easily get to the stations.

The emerging pattern now is for PTV to embark on this type of upgrade when new stations open. But given the various upgrades in this project will be introduced in stages, there’s no real reason such a revamp has to wait. Indeed, given some stations will lose parking during rebuilds, it might help ease the pain of disruptions during the project.

As the Urban Melbourne web site points out, the other thing missing is something specific on land use planning around stations. There’s an opportunity for more development, particularly on big slabs of land currently taken by car parks (where it wouldn’t take space needed later for track expansion).

Labor’s made some interesting claims as part of justifying the change of plans. Firstly they allege the Coalition secretly removed HCS from the project scope in October (eg before the election), due to cost blowouts, and they claim to have a letter proving it.

Secondly, they’re citing concerns with the unsolicited proposal process, including the prospect of Metro (MTM to be precise) being franchised to run the Dandenong line well after their contract for the rest of the network might have expired and another operator possibly appointed for the rest of the network. That could have been messy — the old days of Connex and M&Train led to issues. And there were concerns about the cost to taxpayers of the ongoing payments to MTM over the life of the contract, relative to the project cost.

On the face of it, the outcomes for train passengers and road users from the revamped version are better, but the devil will be in the detail. And let’s hope the government works hard to make sure the outcome for taxpayers is good as well.