I think FebFast has brought a change in attitude from me. I’m going to continue to take in healthier snacks with me to munch on at work — to my surprise, I don’t actually mind the taste of raw carrots, and it’s been easier to Just Say No to biscuits than I thought it would be — easier than trying to limit their intake, in fact.

Apart from biscuits, I also managed to stay off chocolates, chips (hot and cold), muesli bars and pizza. I’ll probably get back onto occasional pizza, hopefully home-made and healthy (in fact I just got a pizza stone for the barbecue, now looking for recipes!), and occasional hot chips and chocolate, but avoid having them regularly, and lay off most of the baddies.

I’m in two minds about muesli bars — I know even the Carmans ones (with no chocolate or yoghurt) are basically just a big biscuit, but if I do munch on them I’ll definitely limit myself.

A few years ago I compared the nutritional attributes of various snacks… it’s no surprise that fresh (not dried) fruit provides fewer kilojoules, less sugar and fat and salt than chocolates or muesli bars.

The weakness was cake. With birthday celebrations during February for one son, a nephew and the usual work end-of-month practice of celebrating “February babies”, it can be socially difficult to resist joining in having some cake.

I raised $200 for youth addiction services by participating in FebFast — half the default target that was attached to my enrolment, but I had no idea how high it’d get. Thanks to all those who contributed — I think the donate link still works!

I got myself some earphones (on frequent flyer points) for running. Given when I listen to music I can’t count my pacing, I’ve got RunKeeper saying hello every minute. I’m walking one minute, then running another. Some might call this Interval Training. I call it Needing A Rest Every So Often.

But it is allowing me to gradually extend my runs.

What music? So far I’ve been trying some Ocean Colour Scene. The rhythm is fairly consistent (I won’t say plodding), and I know the music so I can enjoy it in the background without it being too distracting.

Runkeeper is telling me I’m averaging a kilometre about every 6 and a bit minutes, making my speed about 9 kilometres per hour. That said, I have to remember to set the Location setting on the phone to GPS only; setting it to “high accuracy” (using WiFi and other settings to help) actually seems to play against it when doing laps of the oval.

One conclusion is: I probably need to buy some decent running shoes. I got cheapies to get me started, and it’s probably time to (sorry, bad pun coming up) take the next step.

I probably also need to find a proper cool-down method. It seems to be pointless to have a shower too quickly after the run — somehow I just come out afterwards still sweaty.

I’m still targeting 10,000 steps per day — some days I’m reaching and exceeding this by a long way, some days I’m way under. It varies, but it’s good to have a goal, and just thinking about it has me consciously trying to walk further.

Looking at the figures, I’ve averaged 9850 per day since the start of February.

Turns out for people who are members of both Flybuys and Medibank and also have a Fitbit there’s a scheme running this month where people who sign up and reach 10,000 steps every day in March win a $100 prize. They also have 10 Flybuys points for each day you reach the target. 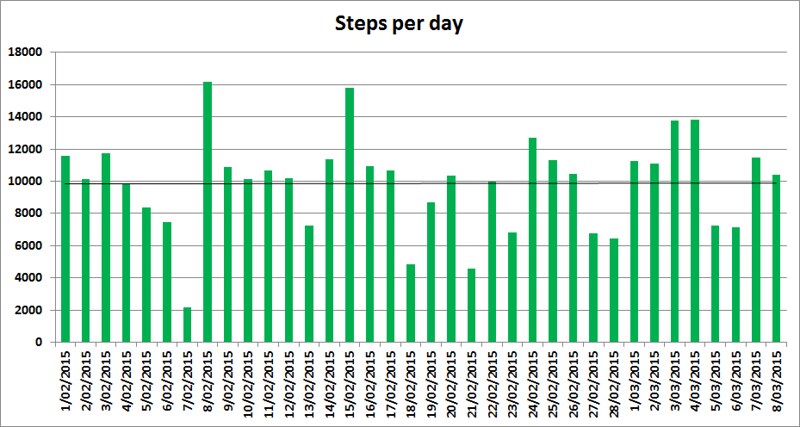 All in all I think doing FebFast was good for me, and hopefully has helped changed my attitudes towards diet, as well as fitness.

4 replies on “FebFast is over”

A fantastic effort. Well done.
I’m no dietician, but I wonder why you feel the NEED to snack during the day? Does that mean you’re not properly filling up at mealtime? Mealtime is generally more healthy than snack time. Just a thought (from a non-expert).
I’m also glad that you are jogging around a track with head phones on. People who jog on footpaths and roadways with music blaring in their ears are a danger to motorists and cyclists as they can’t hear engine revs or bells ringing.

If car drivers are scared of using a lethal weapon to kill someone, they can drive more carefully. Or avoid using a lethal weapon for transport. If you’re moving hundreds of kilograms of steel at breakneck speeds just to get to go buy food (something we’ve done for long enough before cars were invented, and quite safely), you really can’t blame anyone else for what happens.

Roger, depending on when you wake up/your commute, not snacking can mean there is a long gap in between meals for some people. Consider a Melbourne commuter who might wake up and have breakfast at 6am or earlier and then eats nothing til their lunch break, if they take it. Something to be said for healthy snacks in the day time to keep energy levels up. Certainly better than just drinking coffee.

#Charlotte. Yes, what you say makes perfect sense. I guess my experience is with my teenagers (not Daniel’s age group!) who sometimes don’t eat much at meal times and then feel the need to snack (on junk) later on.