Brisbane and Perth had got their smartcard systems before the Myki system started in Melbourne (just on 5 years ago). Other cities have followed, and now all Australian capital cities have public transport smartcards.

Every single one of those other cities has a paper or single use ticket alongside the smartcards.

And every single one of these other systems has been provided by a supplier with a track record of installing smartcards on other public transport systems — in fact many of them tendered for the Myki project — but our government ended up with a system to be built from the ground up.

My view is this was the biggest factor in the delays to implementation, all the technical problems along the way, and the end result of a system that to this day is still lacklustre.

However I don’t think it was necessarily the biggest factor in the total cost of the system — believe me, software developers don’t get paid that much. No, I suspect the costs are largely down to the size of the rollout. Sydney’s Opal system is based on pre-existing Cubic technology, and is in the same ballpark for cost… however as we shall see, Brisbane appears to have got away with a bargain.

Here’s my comparison table of the different systems around the country:

Got any corrections for me? Please, send me an email or leave a comment below!

[1] Most of the systems cover more than just the main metropolitan area. Myki covers regional rail out to Geelong, Ballarat, Bendigo, Seymour and Gippsland, and the local bus routes in those areas. Sydney’s Opal similarly covers the entire area of the Sydney urban and intercity rail network, which includes Newcastle (the area, but not the central station, which has now closed), Bathurst and other regional centres. Perth’s Smartrider covers local buses in places like Bunbury and Geraldton, but not the regional services that will get you there.

[2] Prize for the most prolonged rollout goes to Myki: early 2009 for regional town buses, but not active on V/Line until mid-2013, and in that time, the scope was reduced to remove short term tickets, purchase/top-up on trams, and long distance V/Line trains and coaches.

[3] I had a lot of trouble finding comparable figures for system cost. Some only include the initial rollout, but not running costs. Some such as Brisbane had a provision for the system supplier sharing “secondary revenues” if/when the system was able to be used for other purchases, though this document says the cost was $99 million to establish, and $53 million in running costs to 2016.

[4] I think the biggest factor in the system cost is the size of it — the number of devices — thus I’ve tried to compare them via the places you can buy and top-up/recharge cards, and the fleet and system sizes.

They are quite different, for instance in Perth you can use the card on all services, but there are only a few railway stations where you can top up, and also far fewer retailers than in Melbourne or Sydney. (I found figures indicating Smartrider has a total of about 4,000 smartcard devices, where Myki has about 20,000.)

The number of railway stations and the size of the tram and bus fleets is also significantly different.

Note that in Adelaide, the readers are on the trains, not the stations (except for Adelaide station). Perth’s rail network has 70 stations, but only 19 have top up machines. In Brisbane (Gold Coast), the trams have their readers on the stations, not on the vehicles.

Of course, Myki has to have more devices: touch-on and off is so slow that extra readers have had to be installed at railway stations to minimise queuing and crowds (some have been added as recently as last month), and the lack of a short term ticket or any way of buying a ticket on a tram means a wider retail network is important.

Sydney’s system still appears to be in flux, so it wouldn’t surprise me if card purchase and top-up becomes more widely available in future.

(See also: my conclusion at the bottom of the post.) 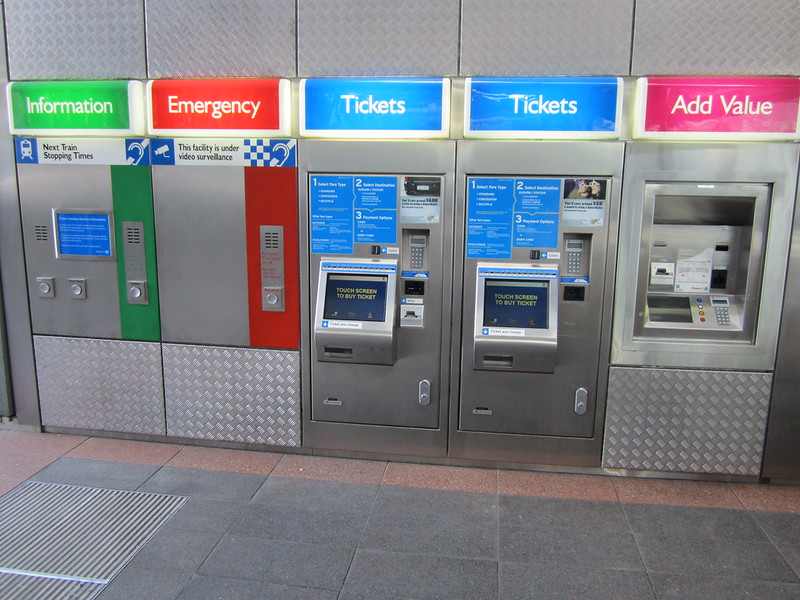 [5] The cost to a passenger of just getting a card varies widely, with Brisbane and Perth cards costing $10 a pop.

[6] In most cities, the smartcards are very much geared at regular users, who don’t mind having more money on their card than a departing tourist would. Perth and Sydney in particular are quite restrictive in their topup amounts.

[7] As has been noted before, Melbourne is one of the only big cities anywhere in the world which doesn’t have some kind of paper/single use ticket available for use — certainly the only capital in Australia.

[8] In most cities using the smartcard instead of buying paper tickets gains you a discount; as much as 35% in some cases less than the paper fare cost in peak hour, and 50% off-peak. In Melbourne the discount was originally intended to be the difference between the old single tickets and the 10 x 2 hour fares, which in the last year of single fares was about 15%. Scrapping single use tickets meant everybody moved to the discounted fare. (Melbourne now has no off-peak discounts, though previously there was a hard-to-obtain 2-zone off-peak ticket, which was much the same price as the 10 x 2 hour discount.)

[9] I’ve also compared the base level fare for a peak-hour adult inner-suburban trip. I’ve excluded very short trip fares to try and make it reasonable comparable, but it’s very difficult to do this properly without digging around and ensuring you’re comparing trips of a similar distance.

Of course, fare prices are not a direct product of the Smartcard system, but the fare policies in place. But the two are closely linked.

[10] Daily caps help people who use public transport for lots of their travel, not just to and from work. Thus they help encourage non-commute trips, and are good for tourists. Some of the systems have no daily cap, but note most of those that do apply a simple dollar amount — apart from Myki, which is more complicated, though to an extent this will be wasted from 2015 when Melbourne trips are capped at the zone 1 amount.

Brisbane’s Go Card has a 2 journey daily cap only for Seniors, which indicates it could be implemented for more users if they wanted to. Most systems will also string together multiple trips into a single paid journey if you travel continually, so you don’t end up paying for lots and lots of fares in a single day — though in Sydney you may, if you keep changing modes.

[11] As noted yesterday, Myki was originally intended to have a weekly cap. The other systems largely don’t, though Sydney and Brisbane have a X journeys then free policy, which can be rorted by taking short lunchtime trips early in the week to reach your quota by about Wednesday. It’s reflective of the simplistic capping in those systems, and arguably starves the system of revenue from long distance commuters who would use the system anyway if the cap was less generous. A more intelligent weekly cap would be better.

[12] Only Myki and Adelaide’s MetroCard offer a pre-loaded Pass system. In Myki’s case, this reflecting the old Metcard structure, which in turn goes back to the paper tickets of the 80s and earlier. This is a double-edged sword: many people find the difference between Myki Money and Pass confusing, but fare policy-wise there’s probably no better way to encourage people to use public transport more.

Adelaide offers a 28 day pass only, but interestingly offers a system called Commuter Club, which is similar to Melbourne’s Commuter Club, offering discounted fares if issued via employers/organisations.

[13] Sydney’s system falls down on free transfers: if you want to change modes, you get stung for another fare (as well as the time penalty of the transfer). There are rumours this will change in the future, but who knows.

[14] Many people have complained about Myki’s slow online top-up speed of up to 24 hours, but in fact Myki faster than most of the other systems. Only Sydney, with a time of up to 60 minutes, seems to have got this right. They’ve probably made use of mobile data technology to get the top-ups from the central servers to the devices on buses and ferries and trams.

[15] All the systems except Darwin’s (which isn’t really a Smartcard) offer an automatic top-up system, automatically adding value to your card when it reaches a pre-determined level, then taking those funds from your linked bank account.

Myki’s auto top-up started off flawed (it would block your card if the payment didn’t work, forcing you to send the card in for unblocking — this has now been fixed) but in my experience works fine now, and is very handy — I never have to worry about topping-up my kids’ cards. Some of the other cities encourage auto top-up by providing you bigger fare discounts.

[16] My non-scientific evaluation of the speeds of some of the systems. Myki is hopelessly inconsistent, except for the new gates recently installed at a handful of locations. From limited use of the other systems, they all seem much more responsive, though in Brisbane the card read was fast, while the gates seemed to open up quite slowly, which could be problematic at peak times.

Why is there no combined system?

The tollways of Australia have got their act together: an eTag used on Melbourne’s tollways can be used in Sydney and Brisbane, for example, and vice versa. Why not public transport smartcards?

Turned out there was a working party trying to get this to happen: the National Ticketing and Tolling Working Group. It seems to have all been too hard to get the cooperation of the various state bodies:

In Australia, while Perth, Sydney, Brisbane and Melbourne have each selected the same card interface, there is no immediate prospect of achieving smartcard data, reader or back-end interissuer interoperability. Efforts by the National Ticketing and Tolling Working Group (NTTWG) and Standards Australia are effectively on hold while each city rolls out its own vendor-specific implementation.

It’s like the 21st century version of the break of gauge. 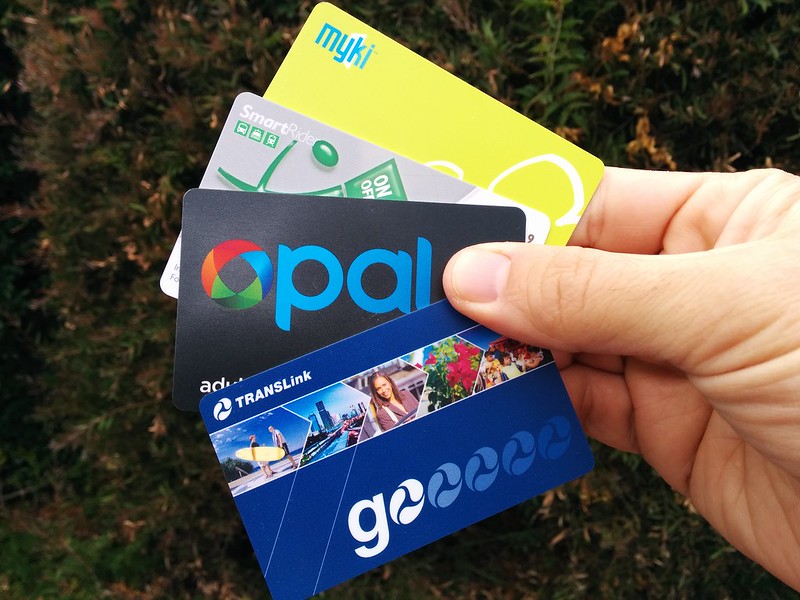 Which system is best?

Would Victoria embark on Myki again now, knowing the outcomes in terms of costs, delays, reliability and speed? I doubt it.

At one stage they tried to claim we had to have a system built from the ground up, because none of the others could cater to the state’s requirements in terms of our public transport system being large and including multiple modes. I always found that very difficult to believe — plenty of other systems handle big multi-modal systems with ease. I suspect there is some truth in that pre-existing systems may not have handled our structure of unlimited use Passes so well, though Adelaide seem to have managed.

So which system is best? I’m not sure there’s an easy answer.

Ideally you’d want the ubiquity of Myki, the single ticket alternative and speed of (any of the others), and the cheap system establishment costs of Brisbane or Perth.

In fact Brisbane is probably the closest thing to being a extensive big multimodal smartcard system that was relatively cheap to implement. Even if it were doubled in size and cost, it would still come out at about a fifth of the Melbourne system cost, though it’s unclear if that reflects the real cost or if it was just a great deal for the government, and Cubic was betting on that extra revenue to come through.

Taking on an existing system also requires any city to change its fare structure somewhat to suit the ticket system — but Melbourne ended up making compromises in that department anyway.