Five years ago today, the government unexpectedly announced that Myki was valid for travel in Melbourne, from 3pm that day.

It followed the rollout in regional centres earlier that year, and the installation of numerous card vending machines and reader devices around Melbourne.

The government had foolishly promised it would be switched-on in Melbourne by the end of 2009, and just about met that promise… except they only felt it was ready for use on trains only, and many of the devices at railway stations weren’t working properly, and the web site had big problems (including compatibility with Google Chrome and some other browsers).

Having used Myki in the regional cities, I was one of few Melburnians to already have a card, and that evening I attempted to use it. The short trip I took was charged correctly, but attempting to top-up at two separate machines failed — contradicting the government’s claims that it was ready for use on the rail system.

All in all it led me to the conclusion that it made sense to order a free card while they were offered, but not to start using it:

Once you have your #Myki card, put it away until the system actually works, unless you want to be commuting to Pain City.

Progress in the last five years

A change of government in November 2010 put the project into stasis for a while.

Eventually in June 2011 the Baillieu government announced that they’d keep Myki, but scale it back — though the total project cost actually went up by about 10%.

The old Metcard system eventually got switched off at the end of 2012, meaning you can no longer buy a single ticket for travel in Melbourne or in the biggest regional cities where Myki operates. 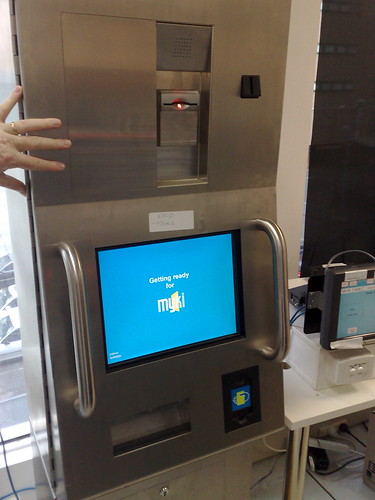 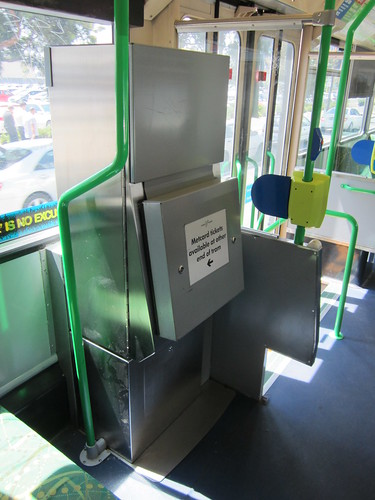 Functionality that didn’t make it into the system

Both before and during the Coalition’s reign, numerous design decisions were made to reduce or hobble the functionality, either deliberately or because things didn’t go to plan.

While trying to precisely copy the Metcard fare structure, some features were deliberately removed:

Other features that were intended to happen under Myki, but scaled back, or never achieved, included:

(Marcus Wong has a good article on this: Broken promises from Myki)

Five years later, where are we?

Overall reliability seems to have improved, but the system is still as inconsistently slow as ever, apart from the new readers installed at a handful of stations. These are engineered by Vix-ERG, which I guess shows that things work better when you get an experienced mob in to do the job.

A number of other problems remain: the big ones being reader response times and incorrect zone detection on buses and trams, but even simple improvements like changing the beeps to be more meaningful (for instance to distinguish between touch on and touch off) and showing the 2-hour fare expiry time haven’t been done.

People put up with Myki, but I think it’s fair to say many of them don’t like it — particularly if they’ve seen faster systems elsewhere.

But we’re stuck with it now. The ten year contract expires in 2016, the system will keep running — which honestly is a relief given the cost of installing all the equipment.

I’m still of the view that the government should review and simplify the fare policies, then re-write the reader software for speed.

Next up I’ll have a post which compares public transport smartcard systems around Australia.

10 replies on “Today marks five years of #Myki in Melbourne”

While issues seem to have reduced somewhat, there are still one or two matters of which I experience.

Despite what the so called experts say, I believe there needs to be a ‘daily pass’ where I can go out for the day with confidence, especially when I have only ‘just enough money’ to cover my travel needs.

There is a sheer lack of competence in the PTV generally. This same system would be quite a lot better if only we had a competent PTV in control of the system.

I hereby express a ‘vote of no confidence in the PTV’, as I have recently expressed in the ARTC management too.

I hope that improvements are made to Myki such as the weekly cap. The Opal card in NSW has a weekly cap of sorts which encourages public transport use and is even good value for visitors if they plan their trips accordingly. Using Myki after Opal makes you feel like you’re being ripped off.
Another improvement surely could be a variable peak/off-peak pricing system depending on the journey and the time. But that maybe too much to ask for.

To repeat an anecdote posted on my blog, a person travelled from the city to Toorak Village ran a errand and caught the same tram back to the city after it had been to the Toorak terminus. He touched on when travelling back and but the reader indicated he was touching off. He had not touched off for the trip to Toorak, so it seemed the tram thought it was still making the same trip. He was concerned that had he not noticed and his ticket was checked, it would indicate he had not touched on. If the tram can’t know where it is, at least a separate sound needs to be made so people are alerted to touching on and touching off.

I still do not understand why they couldn’t use a reputable supplier like Cubic or the same people that supplied the ticketing system for Hong Kong or London. I am sure that somewhere out there is a technology that can handle short term tickets for visitors.

Andrew, this has happened to me a number of times on Route 19. I often catch a tram from Brunswick or Coburg to run a quick errand in the hospital precinct or at the university, such as returning a book to the library or dropping off supplies at the hospital, before catching a tram northwards again. Because it’s not far to the Flinders St terminus, I sometimes find myself on exactly the same tram heading northwards again. Like your blog correspondent, I am disturbed by the fact that if I’d failed to notice the message on the screen, and an AO had checked my Myki, it would look like I hadn’t touched on for the return trip, when in fact I had.

I now get around this problem by touching off on trams. Yes, I know that in theory you don’t need to touch off on trams. But these experiences prove that sometimes you do. Until the Myki programmers fix this problem, either by making the system recognise that the tram has been to the terminus and back so technically this is a new trip on a new vehicle, or by changing the beeps so that touch-on and touch-off sound different, I’m going to keep doing it.

Andrew and Bonnie – I’ve experienced this problem as well. Whilst I know that AO’s can be belligerent, I think there’s ample information there to demonstrate what has happened such that you would never cop a fine for this once it had been looked into. The danger here obviously, however, is that now that there are much lower ‘on the spot’ fines, someone who didn’t know better in the situation you’ve described might pay the fine, for fear of a heavier fine if the matter wasn’t cleared up upon review. I’d hope all AOs have been given clear direction on how to deal with this system quirk.

@Andrew/@Bonnie, this is one of the problems that was meant to have gone away when Myki’s “headless” mode disappeared at the end of 2012. Tram drivers would start entering their trips into the system, so the tram readers would know they were now on a new trip. Obviously it hasn’t been fixed.

It was also hoped this would improve the accuracy of the Myki zone detection, as the algorithm would have route/run info on top of the apparently hopeless GPS data. Zone detection is still problematic, especially when near zone boundaries.

myki works now but in 2011,2010 and 2 days and 9 hours of myki 2009 I tryed to touch on once with the first card ever it had in 2010 (i had till sometime in the middle of the year) I touched on and it didn’t say my balance or “touch on successful” then I missed my train from southern cross-jolimont and I had to buy a metcard and( i was late for my footy match because I was meant to be to the footy early so i had to line up to buy footy tickets).

Daniel, to be fair to the Myki people, I should point out that it is possible that they’ve fixed the bug recently. I wouldn’t know. It’s been a while since I was last caught out by it – at least 6 to 12 months. Since then I’ve been particularly careful always to touch off when I exit the tram in the hospital/uni section of route 19. So if they have fixed the bug recently, the fact that I’ve already touched off means I’m not going to notice the fix. I’d be very interested to hear from anyone who is still encountering the problem. (Andrew, did your blog commenter say how recently this happened to him?)

Next time I have reason to go into Elizabeth St, I might conduct an experiment. Exit the tram at (say) Bourke St without touching off, note the tram number, get on the same tram again on its way back a few minutes later, touch again, and see whether this one registers as a touch-on or a touch-off. If a touch-off, that will be proof that it’s not fixed yet. I don’t get to the CBD very often these days, so if any of you who work in the CBD want to give this a try and report back to us, please do.

I agree with the comment about zone detection still being problematic. At least every few weeks I find myself on a bus that doesn’t seem to know which zone it’s in.

Indeed, the saddest thing is that all the infrastructure is there (well, mostly), but there’s no desire to continuously improve it — it’s been built as a classic IT project: big upfront design (costly, but also always wrong to some degree), time overruns and cost overruns; and any improvements get punted to the replacement system. Everyone knows this style of project is a bad idea, but they still get the green light.

A few simple ideas similar to the ones you’ve suggested:
– show the current zone on the reader
– show expiry times on the reader
– better beeps, and make the lights on the top actually meaningful to humans
– while you’re at it, completely redesign the reader UI (maybe with a font-size that’s readable)
– disable touch-off on trams in Zone 1 (perhaps? — just make it always a touch-on)
– put readers at major tram stops, so you can touch-on before getting on the tram
– improve reading speeds
– integrate with mobiles (viewing trip history, balance etc)
– a better web UI
– add paypass to the top-up machines, and generally improve performance (it’s deeply depressing that going to the shop in Campbell Arcade is about four times faster than using the top-up machine)

These are all totally doable.