I noted this new Myki signage on trams, reflecting the free CBD tram zone from January: 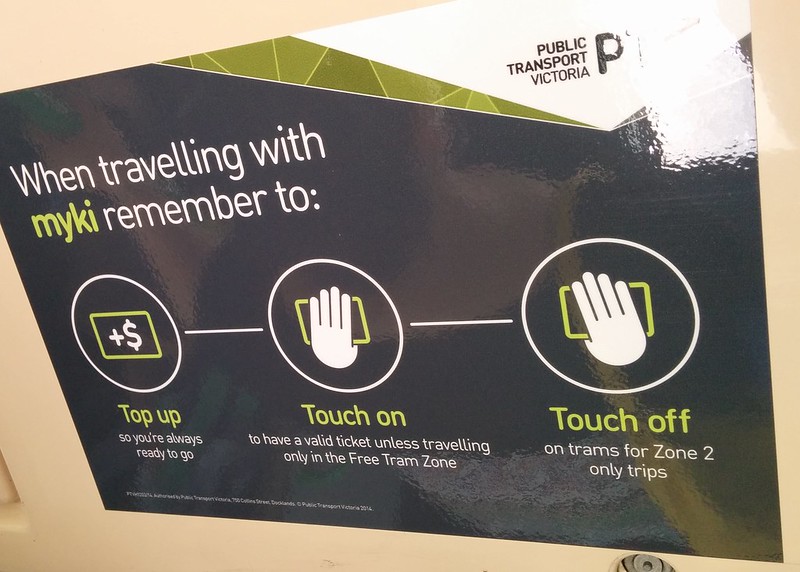 Once it was a simple message: Top up, touch on, touch off.

Now it’s top up, touch on (unless you don’t need to) and touch off (only if you need to).

From the PTV FAQ, it’s clear that they haven’t reprogrammed Myki for the free zone. If you touch on and/or off within it, you will be charged for zone 1, as now. If you do touch on in the tram free zone and want a refund, they say you need to touch off (also in the free zone) then you can contact them for a refund. Bear in mind that if you’re making non-free trips elsewhere that day, it may not make any monetary difference.

Confused yet? Not surprised.

Touch off would never have become a problem if Myki response times were consistently fast, as they are on other public transport smartcard systems. Originally it was thought the system would be so fast that they were going to use the terminology “scan on, scan off“… but by mid-2010, they knew it was going to be so much of a problem clogging up tram exits that they extended zone 1 to the end of all tram routes and told people not to bother touching off.

The new gates they’re trialling at stations such as Richmond and Springvale are an improvement in terms of response times, though it’s unclear if these would work on trams.

Touch on won’t be needed either, from January 1st if you’re travelling entirely in the free CBD tram zone. There is of course no monetary difference if you travel in and out of the CBD by public transport (unless you use the free Early Bird train fare).

Tread carefully if you’re planning a free ride though. The free zone ends the stop before the Casino, Museum and the Arts Centre. One wit on Reddit noted the free zone looks quite like a yellow (green?) submarine. 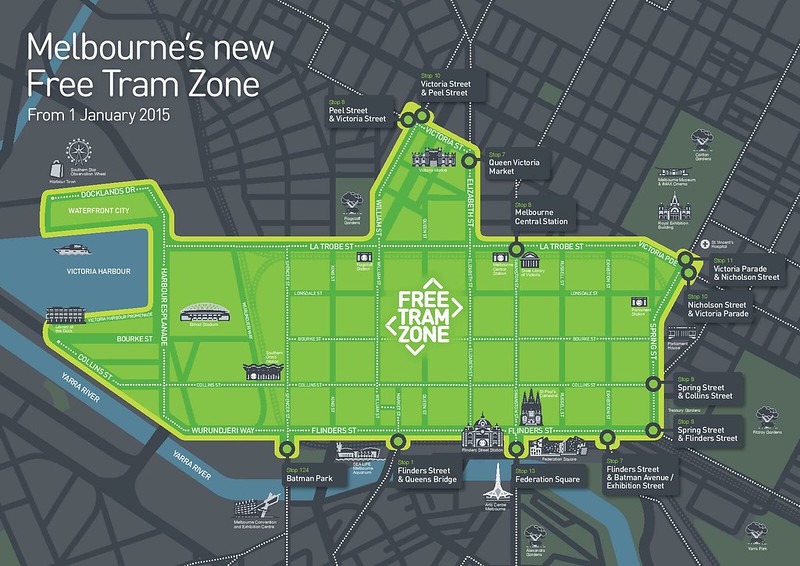 The change to free CBD trams and (almost) scrapping of zone 2 reflects something of a race to the bottom by the political parties in this year’s state election. It’s unclear if the patronage growth resulting from the fare cuts will be reflected in extra services or at least bigger trams to relieve crowding… but one can only hope that the next big fare change will be more equitable. Like taxes, fares should ultimately be both affordable (not a deterrent to patronage growth), and helping to grow revenue in a sustainable way that helps public transport services continue to expand.

Those who can, might like to check out options for traversing the CBD by bus… Lonsdale Street and Queen Street are well-served by frequent buses most of the time.

Is there any technical reason why we are not getting free buses in CBD zone? As you said, there is a frequent bus service in Lonsdale St very handy for those of us on that side of town.

The whole idea of the touch on and touch off, is to help track the numbers of people who are on each service.

Now, we can do no better than what we did with Metcard, and guess.

Under the old Metcard, you had some idea on how many people boarded a bus at bus stop 1, and how many at bus stop #2. But you had no idea how many from stop #1 are still on the bus after stop #2.

With the MyKi touch on and off, you knew how many people stayed on after stop one, and you could get a good idea on a vehicle loadings at each respective section of the route length.

There was great value in PTV having such figures, because they could see with pure fact that, a particular bus or tram was full each time it worked over section X of route Y.

completely ridiculous for the free tram zone to end one stop BEFORE the casino, museum and arts centre. are they using the 3000 postcode as the boundary or is there some other reason for it?

The public transport system in this city is being run by idiots. Daniel, you have provided more proof!

I went into the city yesterday CBD tram stops had been rebranded and the > was red why did they waste money like that.
rebranding should only happen if there’s a new opereater (connex to metro)(vicklink,metlink to PTV).
this money could be used in money for different public transport projects.
P.s could someone let me no how much rebranding costs in dollars.