As I write this, the seat is still too close to call. Counting is continuing, but it would seem we are destined to remain a marginal seat for the next election — in fact some voters reckoned they were deliberately voting to stay marginal.

Elsewhere, some sandbelt (or as I prefer to call them, “Frankston line”) seats are still being counted, though it looks like some of them have swung back to Labor. 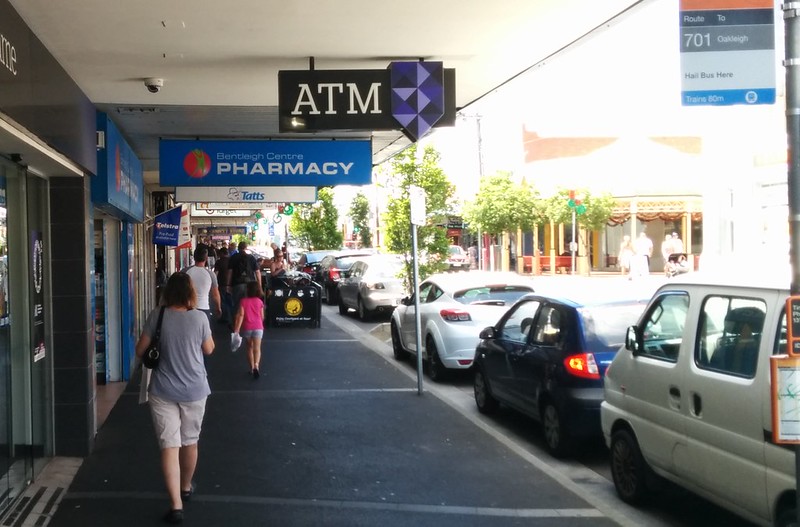 A few weeks ago Prime Minister Tony Abbott declared the state election a referendum on the East West Link tollroad.

Some people still don’t grasp that the tollroad was a bad idea for numerous reasons.

Foremost in not grasping these concepts is the PM himself. It’s hardly surprising; in transport policy as in so many other areas, he’s a dinosaur.

Having declared the election to be a referendum on East West Link, he has now put out a statement saying he wants it to happen anyway:

“He (Denis Napthine) restored the fiscal position of the state and embarked on a major infrastructure programme to get Victoria moving. I share his commitment to the East West Link and I am determined to do what I can to ensure this vital national infrastructure project proceeds to completion.”

And to cap it off, when he had his first phone conversation with Premier-elect Daniel Andrews, he suggested building it anyway, despite Andrews’ pledge not to!

Mr Andrews spoke with PM about 30mins ago – "he asked me to break my commitment" re: EWL & "I very politely" said no. pic.twitter.com/d8VS9Uf6rW

I suspect Abbott simply doesn’t understand why people would not want a massive new road. He still thinks they’re the “roads of the 21st century“.

I’d like to think that in our big cities, voters are increasingly aware that cars a not a mass transit solution.

Credit to Daniel Andrews for refusing the offer to break his pledge, and indeed deciding to release all the East West Link paperwork (including cabinet-in-confidence papers). It should make for some interesting reading. 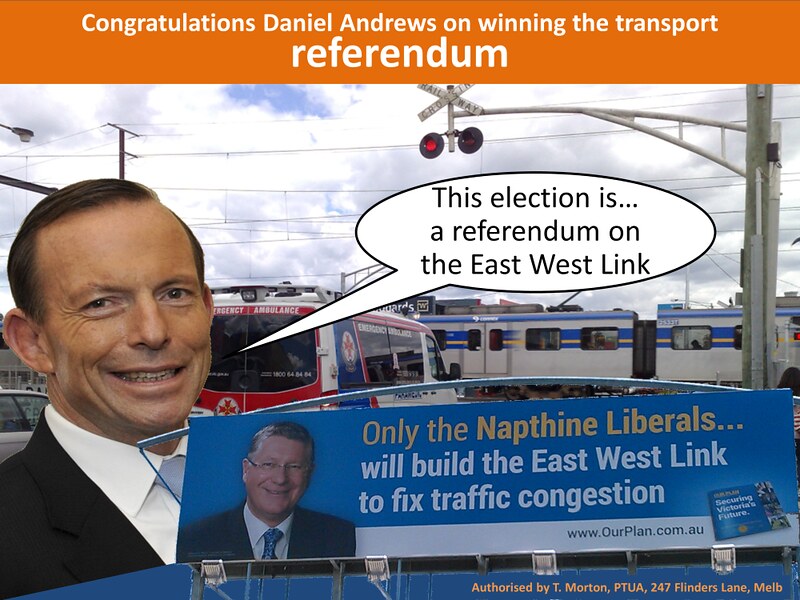 My son Jeremy’s Pudding video got noticed by The Age… By Monday morning it had over 14,000 views.

On Monday, The Age updated its story with an audio interview with me, describing what inspired the video. Then it got picked up by news.com.au, and then shown (including to Mr Andrews) on The Project (about 26 minutes in). As I write this, it’s at 28,000 views.

I know Daniel Andrews has a sense of humour… hopefully he sees the funny side of this.

So how did it happen?

Jeremy had been looking at an ALP campaign video on Youtube, and played it to Isaac (who is of voting age), who misheard, and wondered why there was talk of pudding. Jeremy (too young to vote) took it from there.

Initially Jeremy posted it privately, and only his friends could see it, but M thought (and I agreed) it could get a wider audience on YouTube. It spread after I tweeted it, helped along by my Twitter feed being followed by a number of journalists.

What’s interesting is that both my kids are becoming more politically engaged — a product no doubt of my interest, and the fact that we often watch the evening news together.

The political parties using social media and the internet is helping this, and in fact hopefully the spread of this video has helped more otherwise disengaged people know who our new Premier is.

Yep, a neat summary. Another election won and lost on the Frankston line.
I think you’re right that Jeremy’s video will raise the profile of “Dan” in a good way.
My only query is your comment “people would not want a massive new road”. I think people want BOTH freeways to take them from their doorstep to everywhere AND a fast, efficient and frequent PT system. But no increase in taxes, of course!

I agree with Roger. I think most people want more freeways and excellent public transport without fully comprehending the fiscal, geometrical, environmental and social reality of such a choice. Vote Compass data highlights this with the majority of respondents saying that the building of the East West Link should not be canceled and at the same time saying that more money should be spent on public transport even if it is at the expense of roads. See http://www.abc.net.au/news/2014-11-11/vote-compass-results-show-voters-support-east-east-link/5880648

Well done on your clever offspring; that video is hilarious.

I voted Labor for the first time in my life, and I’m in my forties.

The main factors in my decision were:

Daniel, I look forward to seeing you continue to put the state government under your microscope, on this blog and elsewhere.

I think Abbott does understand that Victorians dont want another toll road tunnel. But he is a Tory and only cares about those that can afford to drive. He was born in London and London has no road tunnel longer than 2km, London is building rail tunnels as part of the £15 billion CrossRail project.

It’s easy to see how politicians keep building road tunnels. Most drive everywhere (or are driven everywhere). They would chat with their driver about traffic, and how it would be great if we had bigger roads, more tunnels. They chat with their politician friends who say the same thing. It feels like everyone in their world agrees – we need bigger and better roads!

And then we get funding for roads. Again and again.

The election was a referendum on the EW link however I see no vision for an alternative.
In regards to the point stated this is my opinion

It definitely will alleviate congestion along Alexandra Parade in the short to medium term however as freeways pump large volume of traffic into connecting arterial roads it will increase traffic congestion along Hoddle St, Chandler Highway, Flemington Rds and many other minor roads

◾It would have entrenched car dependency — which is bad for all sorts of reasons.

Car dependency is already entrenched however it is not the only reason why we are dependant on cars. The reasons for entrenched on many middle and outer suburbs are low density, single use zoning, poor street design (wide roads, few footpaths and too many cul de sacs), convoluted bus routes, no placemaking. etc

◾It would have swallowed billions of dollars in funding — perhaps $18 billion just for stage one.

◾Because it was so expensive, we couldn’t have it as well as big public transport upgrades. Trying to do both would have led to the old “balance” scenario, where all the road projects get up, and public transport gets the crumbs. (Even while the $4 billion Regional Rail Link has been built, which you’d think would skew the balance back towards equal, billions have been spent on motorways, and pseudo-motorway “arterials”.)
This has been the case in Victoria for the last 50 years and so far Labor has only committed $300 million (promised not budgeted) into planning for the metro tunnel so nothing will change in the foreseeable future. Apart from the RRL, Labor did not make any significant commitments into PT projects either

◾Even if you could fund everything, building big new roads is still a bad idea. Even if you argue they spark economic growth by enabling mobility of people and goods, the problem is they do so in the least efficient manner possible (and in the case of people, limiting it to those who can drive).

There probably still is a case for road tunnels however a better alternative would be the NE link which would encourage traffic around the metro area rather than through it. This could only work efficiently if a central city congestion charge was introduced as well as toll roads on all metro freeways.

The people still voted for Tony Abbott and he assured Australians that public road investment is the only option. So in effect the Australian people do prefer more roads. in regards to Victorians they did vote against the EW link however they did not vote for a PT alternative.

And ofcourse, the recent announcement by Transdev, that they are going to cut frequencies of bus services on many popular bus routes.

Yes, and this is all because of the previous Liberal Government. Looks like Labor may have been elected just in time to save this horror.

I support most of the route network changes, but read in horror that busy overcrouded bus routes, which urgently need more buses, are also going to get a frequency chop.

Daniel, what are you doing about this?

@DD, the level crossing commitment is over the next two terms of Government, so eight years. That could mean fifty plans in the next four years and fifty construction projects in the four years after that, but it’s unlikely. At 52 weeks per year over eight years, that’s an average of one crossing completed every eight or nine weeks. There aren’t enough ready to start construction anytime soon, so there will have to be a lot of bunching.

Hmm, we have a whole bunch of construction companies lined up, don’t we? :P

And congrats to Jeremy.

(Might be worth noting the relevant timestamp in the Project clip?)

Ten thumbs up ! While we should not mock people in the communiddy with genuine disabilidies, this grating affecdation is become too widespread. Daniel Andrews had bedder go grab one of the last Holdens before they all run out, and drink a boddle of warder.