One day until the state election.

They do great work, and it’s rather good to see the ABC’s Fact Check unit looking at Victorian issues just before the election.

A couple of days ago they did a segment on train punctuality:

They looked at the statistics, and they also considered stop skipping, which figures indicate is done on less than half of 1% of services — not enough to greatly influence the result, though sometimes done to excess.

But as commenters on their web site have noted, they didn’t look at the other factor: timetable padding.

Comparing times on the Frankston line: during peak (morning inbound, afternoon outbound), and when it’s quiter (Sunday morning inbound and outbound), we can clearly see that running times have increased — 3-4 minutes was added in 2012. 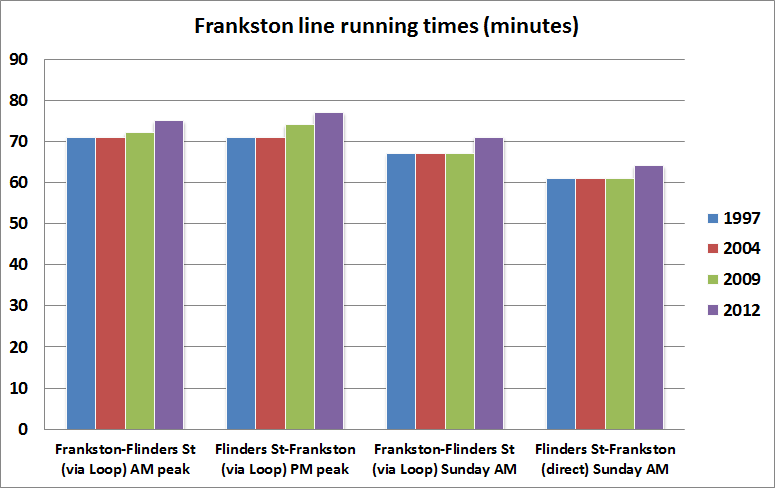 It’s a similar story on other lines.

Is padding the timetable always bad? No. If network congestion or loadings are such that trains can never achieve the timetable, then allowing more time would be justified.

But in some cases there is now so much padding (for instance, Hawksburn to South Yarra now allows 4 minutes in peak; Richmond to Flinders Street direct allows up to 7) that trains regularly sit idle at stations waiting for the timetable to catch up… or (accidentally) depart before their scheduled time.

So it’s hardly surprising that punctuality has increased.

3 replies on “Yes, train punctuality has increased – thanks to timetable padding”

I too watched the ABS Fact Check segment and didn’t think of the padding.
I wouldn’t know where to get historical timetable information from so thanks for providing the chart.
PS Will you be out in Bentleigh campaigning tomorrow?

It’s quite likely that late running is worst in the peak periods when the trains are fullest. So the proportion of passengers who suffer from late running may be much higher. The fact that an almost-empty train at midnight is on time is nice, but that doesn’t benefit many people.

To be fully useful, the statistics should weight each train by its load to estimate the propotion of passengers that suffer from late running trains. If this were impractical, some approximation weighting trains by time of day (as a proxy for likely load) would be easy to do and more useful than the present numbers.

Weighting by passenger loading might be good from a “best benefit for the most” perspective (usually a good way to assess things) for assessing the total impacts of poor service delivery, but poor service at times of the day where there should be more delays can also cause problems, such as trying to connect with late night buses (or other trains, etc). Really a fairly-reliable service should be expected at all times of the day (where needed, additional time should be added to timetables, but….), but as a passenger I expect it much more at off-peak times (and especially at night). Part of making the service attractive is a sense of general reliability, that it can be depended on. If you can’t get it working when massive passenger demands aren’t slowing down the system, that’s pretty telling.

On padding, Frankston trains regularly wait at places like Cheltenham (with the boom gates sitting down, too) for minutes at a time, or crawl along sections of track, because 1 to 4 minutes have been padded to many runs across all days of the week, including weekends. It is ridiculous. A journey that used to take 58 minutes (Frankston to FSS at late night) now takes 62 minutes, and often the trains end up early for most stations, which is terrible (frankly timetable design for passenger use should list a time slightly earlier than the bus/train comes so people aren’t left behind thinking they can get it at the listed time, and “timing points” like major stations can be correct to the real running time). It is an easy and very annoying “solution” to the lateness problem. It isn’t really the state government (of a particular persuasion) that’s at fault, it is the whole system between the private operator, bureaucracy and how they work together and how the contracts are structured, and a general lack of care about meeting the needs of passengers. Basically: no one cares, properly cares, about doing things right and correctly.