Tram extensions: Not as expensive as some claim #VicVotes

The Greens have policy going into the State Election for 17 smallish tram extensions.

Mostly they make a lot of sense — extending many tram routes from their current outer termini in the middle of nowhere (a hangover from when trams and railways competed) to a more logical point such as a nearby railway station or shopping centre. This helps ensure both ends of those routes go to somewhere useful: a traffic generator such as Chadstone, or providing better connections on the public transport network.

The only one I’m doubtful about is extending route 82 from Footscray to the City. Given the route would go through the mostly empty port area, I don’t see the point, as passengers for the city have some of Melbourne’s most frequent trains (which are faster) or some of Melbourne’s most frequent buses to get them there. Personally I wouldn’t see it near the top of my wish list until there’s some redevelopment around the port. 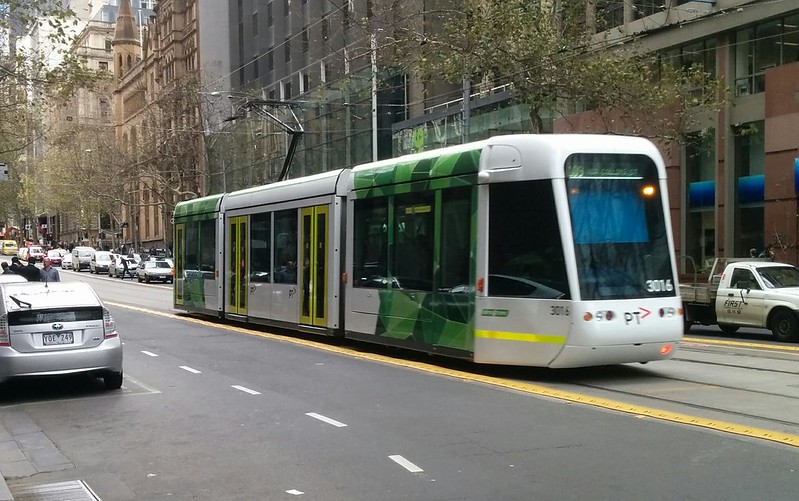 But in any case, the Greens’ estimate for all this was $840 million.

Wednesday’s Herald Sun savaged it, comparing costs with brand new light rail networks interstate such as the Gold Coast Light Rail system, and extrapolating a per-kilometre cost. The problem is they forgot about new system establishment costs such as depots and fleets aren’t applicable to short extensions to existing systems.

They came up with a figure of $4.7 to $6.9 billion. They used that and other estimates as the basis of an editorial accusing the Greens of threatening the state’s economic stability if they won the balance of power.

The Greens had submitted their policy to the Department of Treasury and Finance for an independent estimate. DTF published that yesterday afternoon (along with a bunch of others). It came out at $1.36 billion. Not as optimistic as the Greens, but a long way from the Herald Sun estimate. 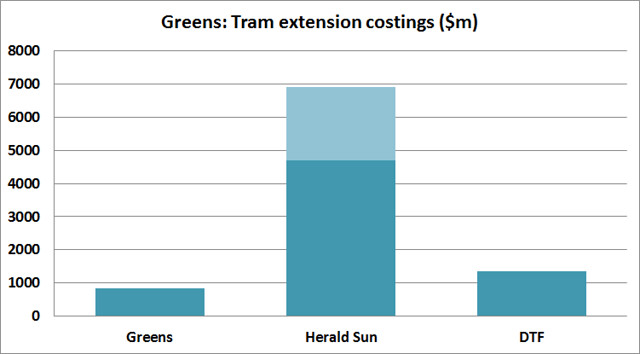 The full DTF document is worth reading for future reference: in summary it says tram lines should cost in the region of $15 million per kilometre, with additional costs for platform stops ($1.7m each), works for major intersections ($2.8m each), substations (for extensions over 5 kilometres $5m each) and terminus works ($5m each).

Update 20/11/2014: Greg Barber points out that DTF said there would be cost savings if multiple projects were implemented:

@danielbowen "DTF notes that efficiencies in the packaging and procurement works may reduce the (cost)" Yeah I reckon cheaper by the dozen.

18 thoughts on “Tram extensions: Not as expensive as some claim #VicVotes”