On Thursday I flew up to Sydney for a few days. After umming and ahhing about whether I should take a small backpack or a wheely-case (I opted for the latter), I caught the train into the city and Skybus to the Airport — pretty quick and easy, thanks to each having frequent services, though the PTV online timetables don’t seem to know that trains from Frankston continue through to Southern Cross. Not very helpful.

There were plenty of people on the train dressed to the nines heading to Oaks Day at the races, and from the bus on the freeway I could see a lot of traffic down on Flemington Road towards the racecourse.

There was time at the airport for a quick bite to eat, as I’d been warned that even at lunchtime, a flight on Virgin is only likely to get you a token amount of food.

Some people boarding the rear of the plane (myself included) did so via the tarmac, which always feels a bit rockstar to me, despite the lack of red carpet. The flight left on time, and sure enough, the food was limited to half a sandwich and a drink. 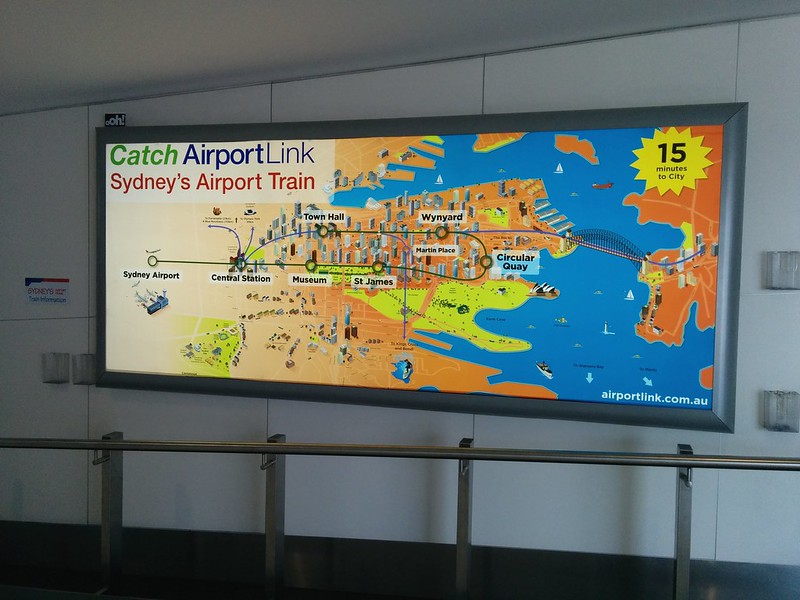 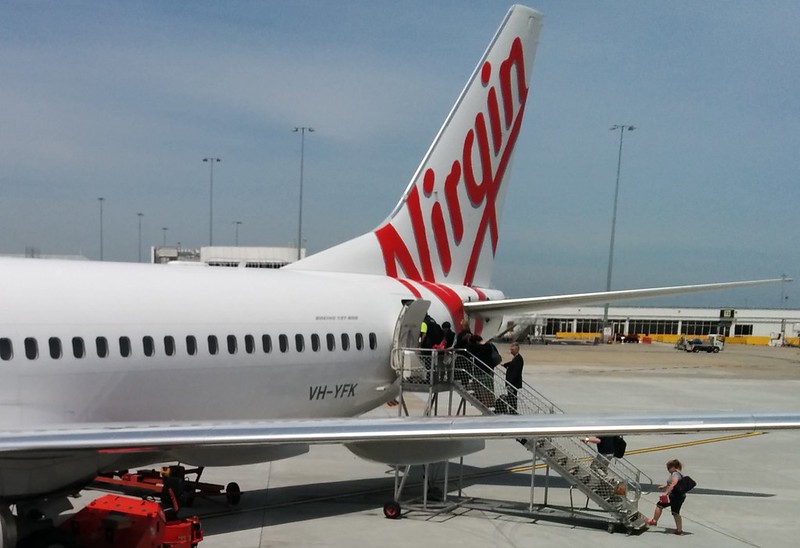 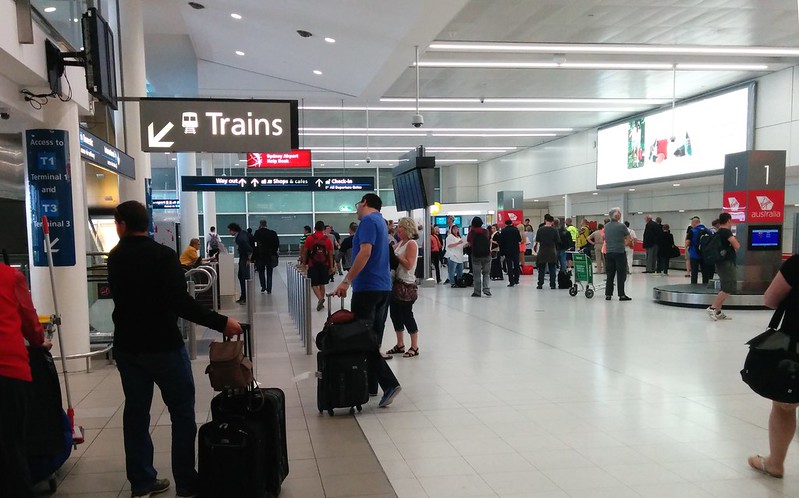 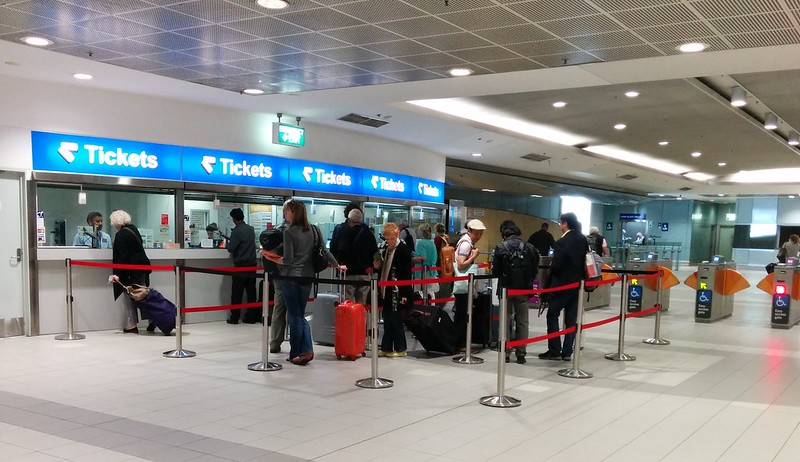 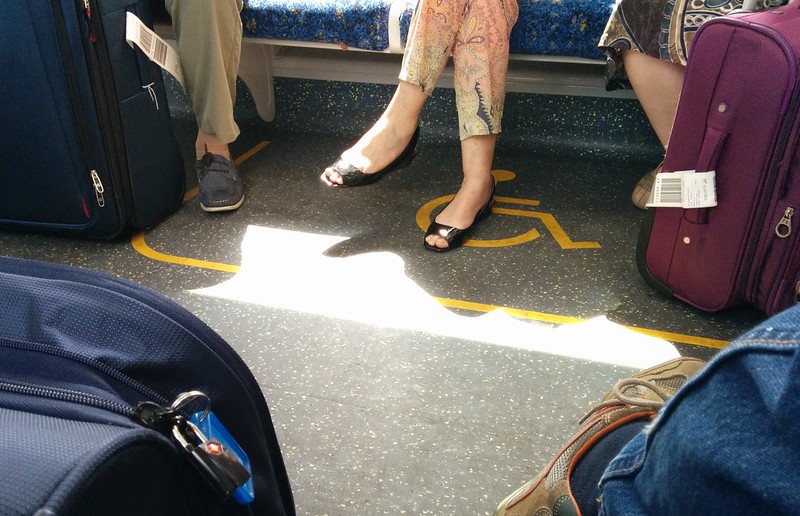 Landed in Sydney. Down to the airport railway station, I noted the large numbers of people queued to buy tickets, and waltzed past them to try out my shiny new Opal card, which worked a treat. A report on that later.

A lot of fellow travellers caught the train. Canadians Todd Litman and Gordon Price have noted that the invention of wheeled luggage means people are a lot more willing to use public transport and some walking, rather than automatically default to driving from home to the airport, and catching taxis in distant cities. I suspect there’s something to that, especially in the bigger cities where traffic congestion for cars and taxis is a real problem.

Caught the train to Central, changed to the Eastern Suburbs “T4” line for Kings Cross, which is where the hotel was booked. It’s interesting that Sydney is moving to branding their rail lines T1, T2, T3… but the signage (particularly in the stations) is quite inconsistent at present… presumably it’s in transition. Ferries are F1, F2, F3… buses are B, and the single Light Rail line… well, that’s L1, though a second line is about to start construction.

In any case, it was a quick trip and I found the hotel easily, then headed back out to explore before meeting Marita, who was finishing up a conference near Circular Quay. 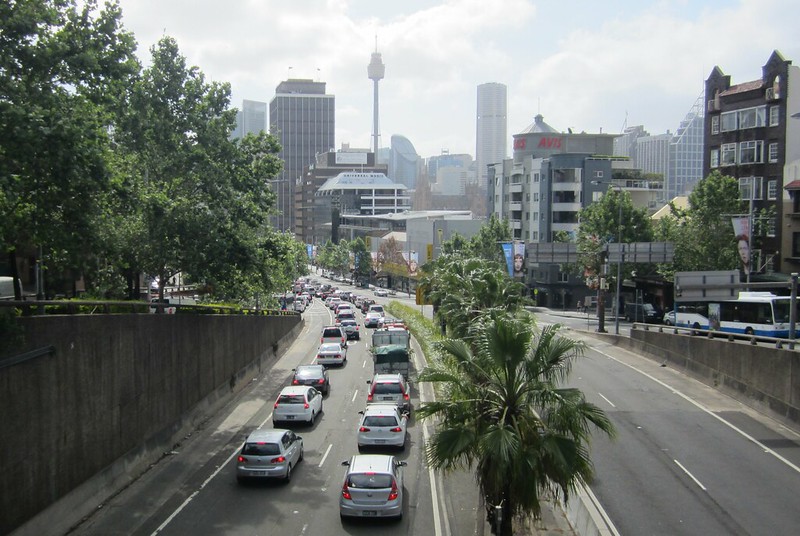 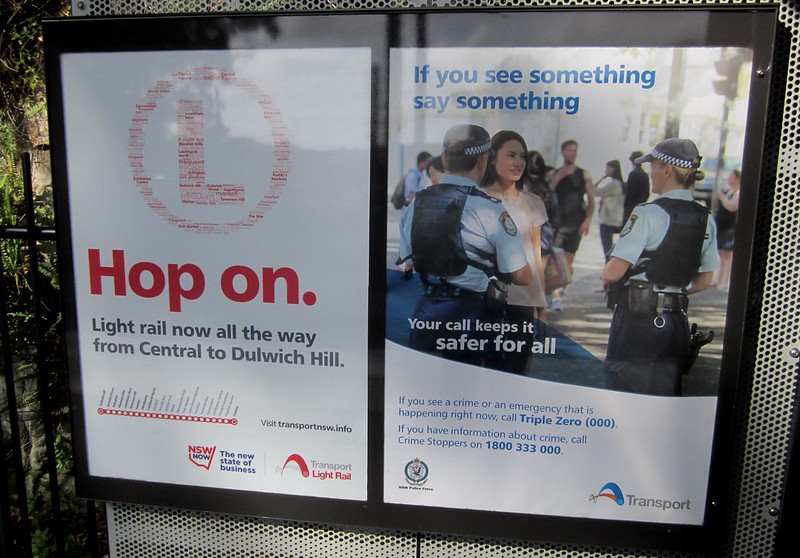 I thought I’d make my way to Dulwich Hill by train (on the T3 line), and then catch the new Light Rail extension back into the City. Obviously my mastery of the train map needs some work, as I missed a couple of things: it’s quicker to change at Central than Town Hall, as the T3 services run clockwise around the City Circle then back out (not marked on the map). Even better, I could have stayed on the first train, as it runs express to Sydenham (which is marked on the map), and I might overtake a train before changing.

Anyway, I soon made my way to Dulwich Hill, and found the light rail stop. Intriguingly some of the warning signage referred to trains, rather than trams or light rail vehicles.

It’s a slightly odd place to terminate Sydney’s only light rail line. It’s close (but not adjacent to) a railway station, so connections are possible but not convenient, but it’s also in a suburb that (as far as I could tell) has no particular traffic generator.

The automatic sign said the next service was in 1 minute. It continued to say that for several minutes… then it changed to note that there was a service disruption along this part of the line, due to a signal failure. Wait, a signal failure? Clearly there’s more to this than a simple tram service. 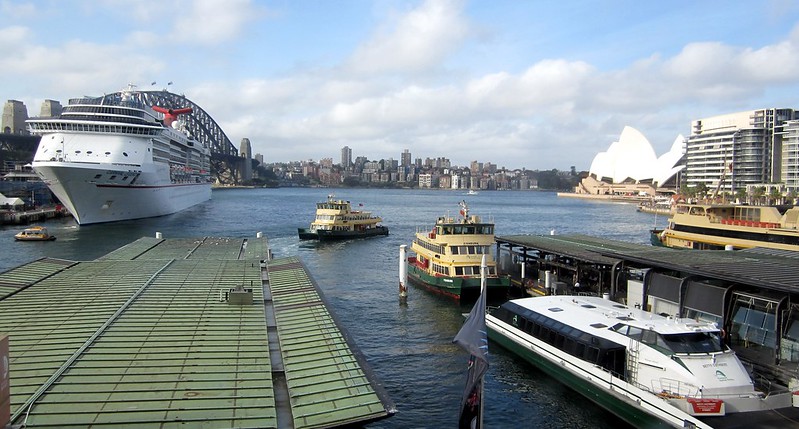 I ended up catching the train back into Circular Quay — which has perhaps the world’s best view from a railway station. A scruffily-dressed bloke with an expensive-looking DSLR camera was snapping lots photos of graffiti on walls along the rail corridor. Hmmm.

It was peak hour by now, and the city platforms were getting impressively busy, though I was surprised to see no less than 12 Sydney Trains staff (possibly more) standing on one platform at Central. Do they check each door to make sure everybody’s aboard?

Meeting M, we walked up George Street, towards Martin Plaza station, rather than have to change trains to get back to Kings Cross. It also allowed us to see a bit of the CBD in rush hour. The footpaths and streets were very busy, as one would expect.

Train back to the hotel, then we went to look for somewhere to eat.

This was not something I’d done much research on unfortunately, and we ended up in a Thai place in Darlinghurst that was… well, a bit mediocre, actually. I mean, what kind of Thai restaurant doesn’t serve roti? And I have a new rule for any sort of Asian cuisine. If it looks like they don’t offer chopsticks, don’t go in.

But I can highly recommend Gelato Messina next door, which seemed to be very popular. One flavour I had was Steve Jobs (“caramelised white chocolate and macadamia gelato with macadamia but crunch. Knows a thing or two about Mac-adamias”) which was utterly delicious. 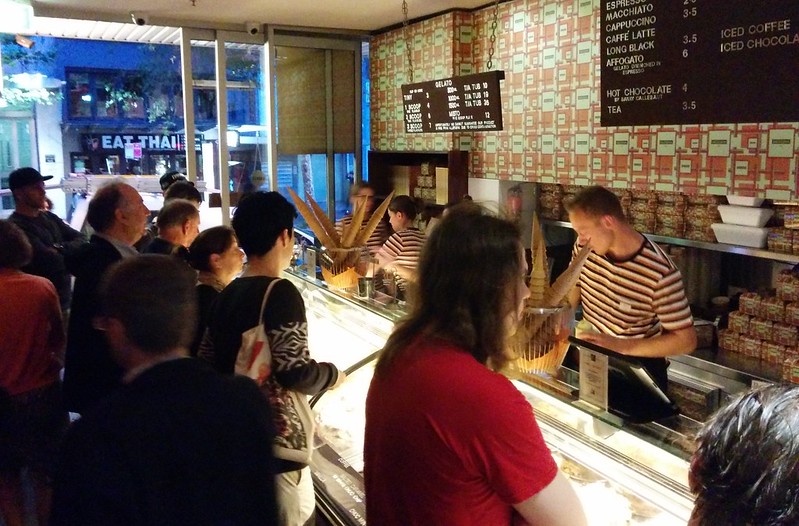 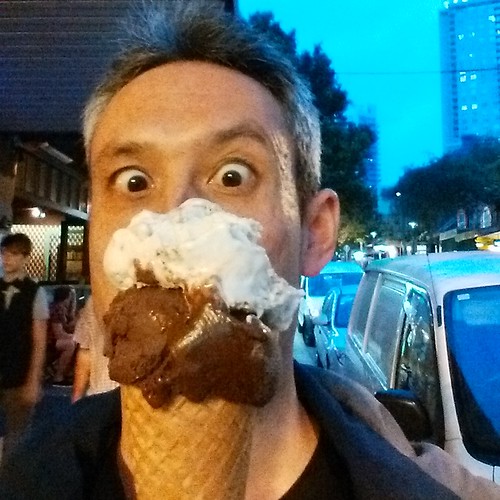 After dinner a bit more of a walk around Kings Cross… my conclusion is that the northern part of Darlinghurst Road is the Kings Cross people know from any number of news reports — lots of strip joints and various other rowdy and dodgy establishments. Behind it, Victoria Street is a little more gentrified, but has lots of backpacker hostels and so on.

The southern parts of Victoria Street and Darlinghurst Road are quieter, and less rowdy, though I noticed a Daily Telegraph story on Sunday which noted the presence of street sex workers in the area — I can’t say I noticed them, but we stuck to the main streets, and perhaps they are in a different part of Darlinghurst.

Anyway, we went back to the hotel room and watched the wonky television — for unknown reasons, it was firmly mounted on the wall at a slight but noticeable angle. I tried not to let it bug me. 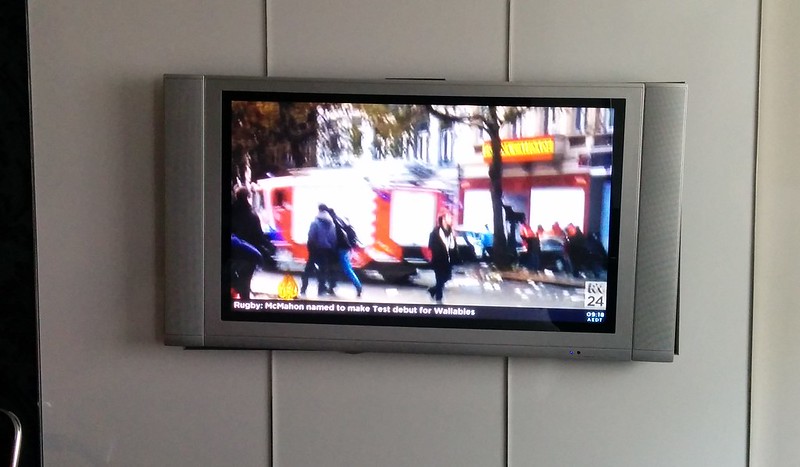