The argument for more/bigger roads (particularly motorways) is often that tradies and others need to carry their tools and equipment to jobs, so they can’t use public transport.

Perhaps that’s true, but they are the minority of people on the road.

According to a 2012 ABS study, only about 7% of people avoid using public transport (for work or study) because they need to carry tools etc. Another 10% say they have to take their own vehicle.

The more significant reasons are that no public transport is provided (about 30%), they want convenience/comfort/privacy (28%), the services aren’t convenient (25%), or the travel time is too long (18%).

So for the vast majority of people on the roads, it’s because the public transport service isn’t good enough, not because they inherently can’t use public transport for those trips. There might be some overlap in responses of course, but I suspect most people travel most of the time with nothing they can’t carry themselves.

And in fact if you jump on public transport at the right time, such as early morning and early afternoon, you’ll see plenty of blue collar workers using it — presumably those who don’t use personal tools, or are able to keep them securely on-site. 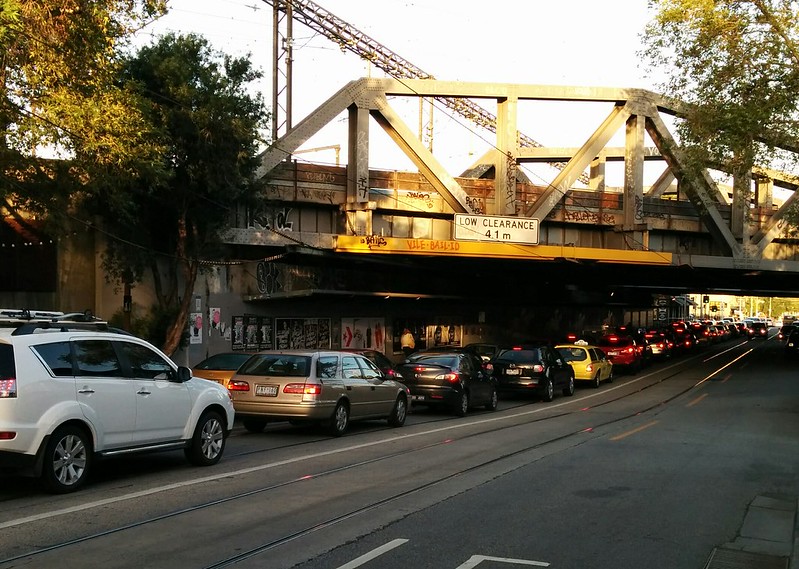 Of course, if building new motorways were really to prioritise those vehicles that have to use them — trucks carrying freight, tool-carrying tradies and so on — there’d be priority lanes to make sure those vehicles got through without getting caught up in congestion caused by individuals in cars. But no roads have such priority lanes.

8 replies on “The “tradies” argument for more roads”

yeah, plenty of tradies on my early train in the morning (Hard Yakka shorts in the middle of winter is a give away)

I would not be surprised if some of that 17% could also use PT during peak if different work arrangements were made such as leaving tools at work or having access to a pool of cars when they get to work or if the PT network was better they may not need their own car in the first place. This would not work in every case but driving to work is so entrenched in our society that I think people are not always very creative when thinking of alternative transport options because they default to just taking the car.

Also if I remember correctly that 7% also includes people who carry passengers some of whom would probably prefer to use PT if it was a more viable option.

Yes, many respondents nominated ‘no public transport is provided’ and ‘the services aren’t convenient’, but how much would it cost to provide public transport that met their requirements/expectations.

What the posting above says, is very much what I feel is true.

One tradie type person I knew, worked for a company, but always had to drive his small truck to/from home each day. He could have caught public transport between home and the depot, and picked up his small truck there.

I am not against better roads. I do object to the lack of public transport.

Construction workers are already at work before most people wake up so you would never see them usually. If you get the train in before 6am which I do once a year you see heaps of people going in for the early shift in fluro.

As per Allan Davies previous articles regarding Melbourne’s centre with respect to jobs is well outside the centre of Melbourne. (linked below)
He identifies that only 15% of Melbournes jobs are in the cbd and more than 72% of jobs are outside 5km of the cbd of Melbourne. Clearly this means that somewhere between 70% and 85% of Melbourne’s jobs are outside the areas most would consider to be well serviced or could be reasonably be well serviced by public transport.
If you’re looking at job access only the question is then how much transport funding do you dedicate to roads versus PT considering not withstanding tool carrying trades only 15%-30% of jobs will be reasonably accessible by PT.

Not all jobs far from the CBD have bad PT provision. Many of them are clustered around station, tram lines and bus routes.

Lots of the jobs are in places like Dandenong, Ringwood, Box Hill etc which have good PT.

Southland station will be providing even more suburban employment PT, when it is built and opened.

This is how smooth the train is in Japan: